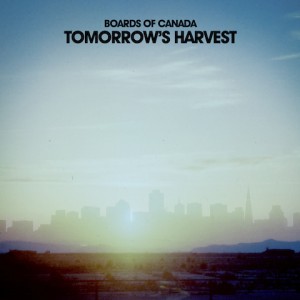 Marketing campaigns: love them or hate them, they’ve dominated the pop music discussion in 2013. Daft Punk’s, we can all agree, was utterly unavoidable, but Boards of Canada weren’t all that far behind. First there were the cryptic code-bearing twelve-inches hidden in record stores around the world, and further details broadcast on Radio 1 and NPR. Then there were the guerilla airings: teasers in Tokyo and Detroit, and a complete album stream in an abandoned waterpark in the Mojave desert, attended by the few-dozen fans who could reach it at short notice. The whole affair was a neat extension of the Scottish duo’s oft-discussed passion for numerology, and their tendency to pepper their records with gnomic easter eggs and subliminal messages.

Naturally, die-hard BoC fans lapped it up. These, after all, are the people who spent much of the noughties on online message boards debating the references to satanism in Geogaddi. But even if, like me, you’d be happy never to experience another viral marketing campaign for the remainder of your brief tenure on this earth, you still have to admire the the duo’s singular approach. More than just a means of catching attention, here was an attempt to reclaim the collective chill, the awe of a shared event in the face of the increasingly atomised and dispersed cultural consumption of the internet age. We’re rarely thrilled by the release of a new record these days, not when we’ve heard half of it teased on music sites beforehand and were able to advance-stream the whole thing before the CD even left the warehouse. But I’d wager some of those who tuned into the debut live stream of Tomorrow’s Harvest last week felt the goose pimples rise.

At the same time, this drip-feed of willfully vague information was clearly designed to court new media, rather than to reject it. After all, such an approach is perfectly suited to the echo chamber dynamics of modern music news, where each new tidbit of information brings the story back to the top of the timeline. As such it’s difficult not to feel a bit cynical about the whole thing, particularly given that the attendant flood of excitement – the apparently unanimous belief that this would be A Great Record – struck an odd chord after the distinctly muted response to the duo’s last album, 2005’s The Campfire Headphase.

Where that album failed, perhaps, was in its straightforwardness. The work of brothers Michael Sandison and Marcus Eoin has always counterbalanced a sort of pastoral, nostalgic poignancy with an undertow of darkness – a tone since detected in the work of everyone from the Ghost Box label to Oneohtrix Point Never. And if their 1998 breakthrough Music Has The Right to Children toed that line artfully, and 2002’s Geogaddi leaned towards more sinister themes, then the folksier Campfire… was a natural return-swing of the pendulum. But it also felt like a capitulation to the duo’s ever-broadening audience. If you subtracted the more uncanny elements of the duo’s style, it turned out, you were left with something suspiciously like easy listening.

Fans will be relieved, then, by Tomorrow’s Harvest. Sure, from the pitch-perfect vintage font on the cover through to the mock 70s TV ident at the opening, it’s evident that Eoin and Sandison are still chewing over the same themes as always. But this is the darkest record Boards of Canada have made in years, largely lacking in the heartstring-tugging whimsy found on Campfire…, or even the druggy playfulness that occasionally animated Geogaddi, settling instead on an overwhelming sense of desolation and despair. Track titles like ‘Cold Earth’, ‘Sick Times’ and ‘Collapse’ suggest a bleak endtimes scenario, while the album title seems to be borrowed from a company that specialises in lining the cupboards of your nuclear bunker. Sandison, however, has denied that the album is to be read as post-apocalyptic fiction, saying instead that it addresses “an inevitable stage that lies in front of us.” Perhaps, then, this is an internal apocalypse: the death of a loved one, or a confrontation with our own mortality.

Either way, in addressing these morbid themes the duo have recalibrated their familiar matrix of influences to focus on the clunky but richly evocative 70s and 80s synth soundtracks of John Carpenter et al. This influence is arguably the animating feature of Tomorrow’s Harvest. Take lead single ‘Reach For The Dead’, which retains many of the duo’s trademarks – the soporific synth tones, the stately processed breakbeats – but feels newly panoramic in scope, its undulations of intensity glacial. Often these tracks trade in unresolved tension – a common filmic device – or else feel oddly elongated or truncated in the manner of film cues (as in brief, taut interludes like ‘Gemini’ and ‘Uritual’), as if they’ve been edited to serve some absent narrative.

As a result, Tomorrow’s Harvest is in places a strangely hollowed-out record. This is music of abandonment, sometimes smothered by the howling of the wind across that Mojave desert landscape (‘Collapse’), or else prone to trailing off into forlorn swirls of static (‘Sick Times’). At points that bleakness tips over into ill-advised dirginess – the noodly ‘Jacquard Causeway’, in particular, is a chore. But, it gradually emerges, this is all more or less part of the plan. The album’s latter half sees that familiar clouded bittersweetness return: in ‘Nothing Is Real’, the gorgeous ‘Sundown‘ (squint and it’s a Oneohtrix number), ‘New Seeds‘ with its surprising modulation in the closing bars. While elsewhere brief flirtations with this tone felt like laziness (‘Cold Earth’ could be a remastered offcut from Music Has The Right To Children), at this point it seems born not out of complacency so much as thematic necessity. At the end of this rather grandiose meditation on death and decay, we’re left with a feeling of renewal, if not redemption.

Doubtless many will consider this a much more credible record than The Campfire Headphase – because of the grand scope of its themes, perhaps, or the sense of occasion surrounding its release, instilled with sledgehammer-like subtlety by Warp’s marketing team. Don’t make that mistake. There is nothing radically new here – just a slight overhauling of tone, a broadening of theme and a refinement of technique. We might reasonably have expected more after a seven year wait. But Sandison and Eoin have produced an album that, in spite of its considerable runtime, is genuinely absorbing and convincing in its narrative sweep. It’s an album that, in the age of the split-second news cycle, demands to be approached in a measured, thoughtful fashion; an album that lays claim an hour of your time, and actually justifies that claim. In that respect, at least, Tomorrow’s Harvest is a rare achievement.