“Imagine being put inside a big drum with your family and then sent out for a ride in space”: freaking out with masked mystics Goat 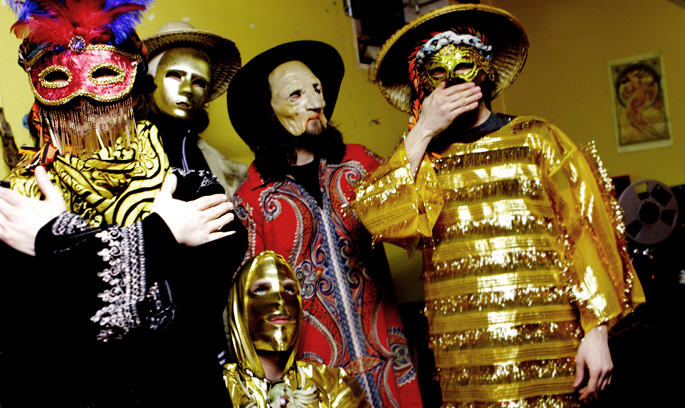 As Blur’s ‘Girls & Boys’ sparks the first visible signs of excitement at Barcelona’s Primavera festival, whose concrete expanse feels not dissimilar to a chilly Clapham car park, it’s hard to peel away to see the experimental Swedish tribal-funk act starting on an adjacent stage.

Goat are already in full swing. Two female singers draped in colourful outfits – part Islamic head-dress, part Voodoo gown – are flying around the stage to Afrobeat drums and wailing psychedelic guitar riffs that don’t scrimp on the wah-wah. The two return from their running dances to chant and cackle down their microphones. “People get rea-dy! Under the rain-bow!” they sing in unison, “People keep danc-ing! Into the ear-ly dawn!” A masked band member launches into an unashamedly-long keyboard solo with all the richness and imperfections of some jam off a 1970s Ethiopiques record. Goat, it seems, are much more fun than 20-year-old Britpop.

The masked band hail from Korpilombolo, a sleepy village in Sweden’s sparsely-populated northern wilderness located between Lapland and the Baltic Sea. According to Goat, or more accurately their press release, Voodoo arrived to Korpilombolo centuries ago via a travelling witch doctor and her followers, who were searching for the village by means of a cipher hidden within some ancient scripture. Their customs and music took hold and remained undisturbed for centuries, before crusaders came and vanquished them. The Voodoo curse still hangs over the town and is now channelled through Goat’s music.

Though it’s impossible to unpick any reality from these myths, particularly as the band eschew face-to-face interviews, it is clear that Goat has digested musical styles from places and times well beyond rural 21st century Sweden.

“Imagine being put inside a big drum with your family and then sent out for a ride in space and time for hundreds of years,” explains Goatface Killah, a pseudonym of one Goat’s secretive bands members used for the benefit of FACT’s email interview “That is something like our history.”

“Well, we could just go up and jam for one hour, but that would be bad manners.”

Killah says that Goat’s music has been inherited from generations of villagers who drew on both old Swedish music and voodoo musical traditions. Its founding members grew up in the 1940s, while those in its current line-up grew-up in the 70s and 80s with, presumably, a lot of influence from African funk and psychedelia. But despite the band’s long history, few outside their Arctic home had come across them; that was until Britain’s Rocket Recordings found a video made by a friend of the band and put out their debut record, World Music.

“We use music in order to connect with spirits and reach higher forms of consciousness but we can also enjoy the simple beauty of a song,” says Killah, “There are atavistic elements in how we understand rhythm and the effortlessness in which we approach out music.”

And then there’re the masks, worn by every member of Goat and ranging from oriental gold masks to Middle Age hangman regalia to more ornate Venetian-style disguises. Do the masks serve to retain some of their long-unknown identity?

“We like to keep our identities hidden. We have no need for self-affirmation. We hate individualism and will not take part in exposing us as persons in order to be recognised,” says Killah. “They are our ritual masks, carried by generations before us. We carry them to feel united with one another and with the spirits of our ancestors while we play.”

For a band that rejects identity and has developed their music though jamming and experimentation, it is a relief to recognise some of World Music’s most infections songs in their Primavera festival set: ‘Goatman‘, ‘Disco Fever‘ and ‘Golden Dawn‘, as well as their new single ‘Stonegoat‘.

“Well, we could just go up and jam for one hour, but that would be bad manners and far too introverted, explains Killah, “We extend the songs with jamming and change some arrangements to keep the music alive. When we play live we want people to enjoy the show and the music and to be happy. We want them to go home feeling uplifted.”