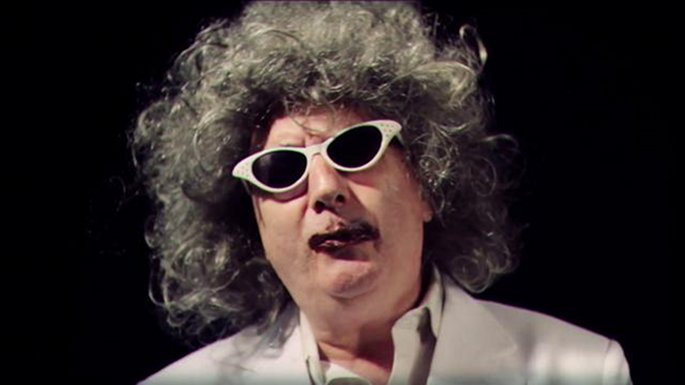 He was going nowhere, working a dead-end job, “the midnight shift out of a bookstore” (and what kind of bookshop is even open at midnight?). One night in June he turned on MTV and there’s Beck. Beck’s just swept the board at the 1997 Video Music Awards, winning a bevy of silver moonman statuettes and body-popping a best rap video award into the hands of Will and Jaden Smith. “Just how many awards did you win?” asks MTV’s on-the-scene reporter, John Norris, at just about the point Wilson switched his TV set on to the post-show wrap-up. “We don’t really know our mathematics right now,” says Beck, “But we do know that six-point-four equals make-out.”

‘6.4=Make Out’ was a languorous slab of mutant freak funk taken from Wilson’s first and (at that time) only album, You Think You Really Know Me. It would have sat quite comfortably on one of Ariel Pink’s records – only it had the temerity to come out several decades too early, in 1977. Since then, Wilson’s pop career had hit a two decade slump, so you can imagine his surprise when MTV’s twice-in-a-row Best Male starts quoting his lyrics on the telly and yelling “Like the man Gary Wilson rocks the most” in the middle of ‘Where’s It’s At’.“I’m flabbergasted, you know? Jesus. Why’s he talking about me?”

“John Cage’s phone number was in the New York City phone book. So I just took a chance, I called.”

Fast-forward sixteen years and Wilson’s riding high, having released a further five full-length records on cult labels like Stones Throw (Madlib, J Dilla) and Western Vinyl (Bonnie Prince Billy, Papa M), and starred in his own documentary feature film. I stumble across the man playing at Paris’s annual free Villette Sonique festival, looking like Phil Spector’s just been dragged through a bush made of cling film and gaffa tape, backed up by a quintet of hip, young Austinites dressed like extras from a Tim Burton zombie movie. Their paint-flecked car-crash-in-the-dress-up-box appearance, Wilson tells me, “goes back to my time when I was interested in the art of Robert Rauschenberg and Jackson Pollock.

The set opens with an instrumental groove that sounds like something the BBC Radiophonic Workshop might have put together for a Schools broadcast about genital herpes, and ends with the whole band leaping on top of each other and rolling around on the stage in a giant heap. “That was the old Endicott pile up there,” says Wilson, a wistful look in his eye. “My buddies, the original Blind Dates, we used to do that. We entered a dance contest once and we did that as our dance. We actually won! I don’t know how that worked out …”

Endicott is the name of the small town in Broome County, New York, where Gary Wilson was born in 1953. A generation earlier, Rod Serling had been born in the same town and several of his Twilight Zone episodes were set there. For Wilson, likewise, ‘Electric’ Endicott is the scene of a whole dream-like mythos, of golden-haired girls in blue jeans on the banks of the Susquehanna River, and gleaming chromium dishes (Endicott also happened to be the birthplace of IBM, where Wilson’s father worked).

“This whole Blind Dates thing started because of a duck,” insists one of Wilson’s former bandmates in Michael Wolk’s (2008) film You Think You Really Know Me: The Gary Wilson Story. “Yeah, my father wouldn’t let me have a dog or anything,” Wilson elaborates as we catch up in his prefab dressing room in the middle of a park in Paris. “But he let me have ducks. Every Easter they would sell ducks and chickens in the five and dime stores. They used to sell purple chickens, blue, green. They dyed ’em, y’know? So every Easter, we would get a duck or two. They were like little dinosaurs. They’d follow me around. My friends would always come round and try to get at ’em. Come on ducky! Yeah, I still might get a duck again, y’know?” 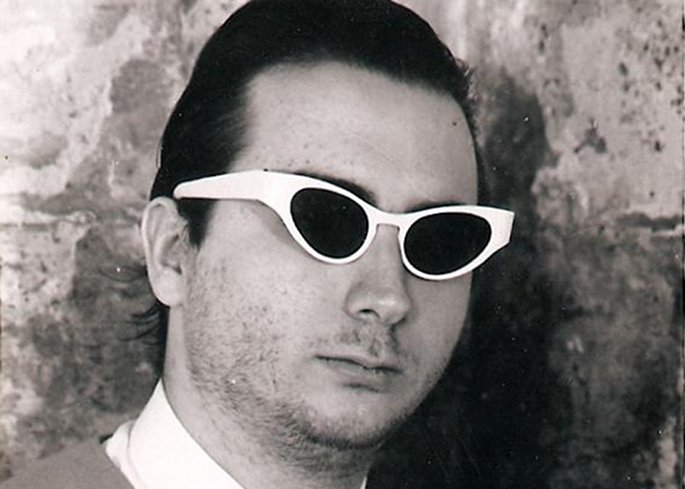 The original Blind Dates – Gary, plus Frank Roma, Carmen Putrino, and Vince Rossi – were all friends since the eighth grade. “We were kind of the outcasts at school,” Wilson recalls. In August 1965, Wilson saw The Beatles at Shea Stadium. “That was a big boom –” and he slaps his hands together for emphasis “– for rock bands. The whole place exploded. Every block had a garage band. But I got in a band that was actually a working band. We worked every weekend.” Wilson was also playing cello in the school orchestra and writing his own compositions, “so everything just kind of blended.”

It was around that time, aged thirteen or fourteen, that Wilson met John Cage, the composer he still calls “my biggest hero”. “His phone number was in the New York City phone book. So I just took a chance, I called,” Wilson recalls. At that time, in the mid- to late-sixties, Cage was one of the most famous experimental composers in America. Notorious for his ‘silent’ piece of music, 4’33”, and certain highly-publicised disasters such as the squall of feedback that erupted when he tried to mic up and electronically manipulate the sound of every member of the orchestra at New York’s Lincoln Center in 1965; Cage was receiving more commissions for new work than he had time to fulfil. Still, when the adolescent Gary Wilson called him up out of the blue, “He answered, and he invited me over to his house.”

“I can do real extreme music and then jump into a tuxedo or something.”

“My mother drove me up and we got lost in the woods,” Wilson recalls of the visit. “So we stopped at the general store and Mr Cage had to come down in his car to the store to pick me up and take me to his house. And I’m in the car by myself with John Cage at fourteen or something and we’re making small talk. He said, you know Gary, I didn’t start making money until I was 50 years old. That stuck in my mind. Now I’m close to that age myself.” In the end, Wilson spent three days at Cage’s place, hanging out with the pianist David Tudor and other renowned modern artists and architects; Cage correcting Wilson’s scores for errors in counterpoint or orchestration. “I think the most important thing he taught me,” Wilson tells me, “was you’ve got to walk your own path, you know what I mean?”

For Gary, who grew up with the music of Fabian and Dion, and with Sandra Dee in A Summer Place, that path consisted of imagining “a teen idol in front of a John Cage performance, singing love songs but being avant-garde.” Hence the peculiar sound that Wilson’s band developed over the following ten years: freaked out miasmas of noise, feedback and atonality which suddenly burst into a smooth slice of moogy lounge jazz or upbeat angular funk before collapsing again into splutters of abstract expressionism. All the while, the band are going wild, pelting each other with bags of flour, “chocolate milk on the trombone and the drums, paint all over…”

And through it all there’s Gary’s close-mic’d voice; at once smooth and cracked, coated in slap-back echo, singing about a string of girls whose names soon become familiar: Karen, Lisa, Cathy, Cindy, Linda. Each one the real name of a girl Gary once went out with. “It’s funny, you know,” Gary tells me in his puckered Scorsese-film accent. “Linda and I have just recently got in contact with each other. Nothing, y’know – she’s married and stuff. But it was funny, because a lot of them don’t know I’m singing about them. They find out and woah! It gets personal, you know?”

So what did Linda think about the songs? I ask

“She was kinda, y’know, flattered. I guess.” 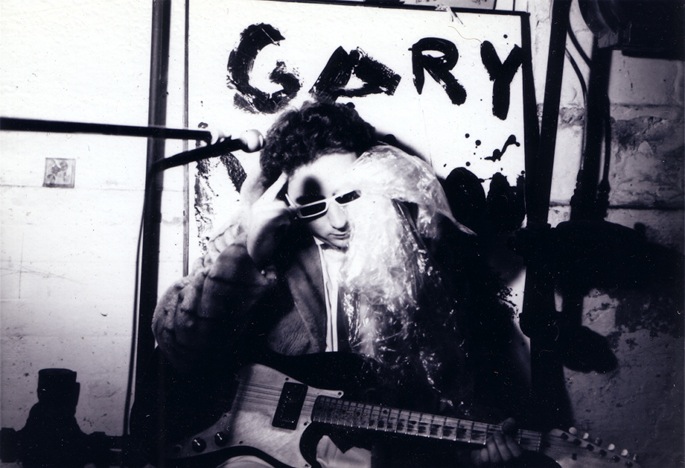 Wilson recorded You Think You Really Know Me in “the worst situation acoustically”: on a four-channel reel-to-reel tape machine in the basement of his parents’ house. “Just cement floors. Total bad recording.” For his troubles, he earned himself a fan letter from The Residents, lunch with Devo, and a little major label interest that ended up going nowhere. There were a few follow-up singles in the early eighties and for a while Gary was making music to accompany the experimental films of his girlfriend, Bernadette Allen. But for most of the eighties and nineties, Wilson’s main musical activity was playing Johnny Mathis and the Great American Songbook in a lounge jazz group called Donnie Finnell and Company East down at the Rancho Bernardino in San Diego. He still plays with them occasionally to this day. “It keeps me balanced,” he says. “I can do real extreme music and then jump into a tuxedo or something, play for some conservative people that don’t even know what I’m doing. That’s how it’s been since early on.”

Even after Beck’s elliptical plug at the MTV VMAs, Wilson’s life didn’t exactly turn around over night. Five years later, he still found himself working in an adult store in San Diego when Motel Records called him up out of the blue. Unbeknownst to Wilson, Motel had been looking for Wilson for nearly six years – even hiring a private detective – ever since their friend Ross Harris, of the band Sukia, played them You Think You Really Know Me (it was also Harris who first played the record to Beck).

Finally, it was former Blind Date, Vince Rossi who pointed the label towards the Jolar Cinema (whose website promises “1000s of beautiful girls and 3 ugly ones”). “I didn’t have a phone at the time. Couldn’t afford a phone. So they called me at work. They said, yeah, we want to re-release your album,” Wilson recalls of the conversation. “Ok, I’ve heard this a lot of times. Sure, if you wanna do it. And I’m thinking, nothing’s gonna come of it. Then, the whole thing just exploded or something.”

When You Think You Really Know Me came out again in 2002, a tipping point seems to have been reached. Neil Strauss from the New York Times wrote an extensive feature on Wilson, even going down to San Diego and checking out his lounge act. Motel released an album of singles and rarities called Forgotten Lovers. Then came the first new album for Stones Throw, the documentary, a track for a Bruce Haack tribute album, appearances on the Jimmy Fallon Show… “Since then, it’s been pretty much up. It’s kinda magical, in it’s own way.”

I ask him how it feels different, making records today compared to when he made You Think You Really Know Me at his parents’ house. What’s changed?