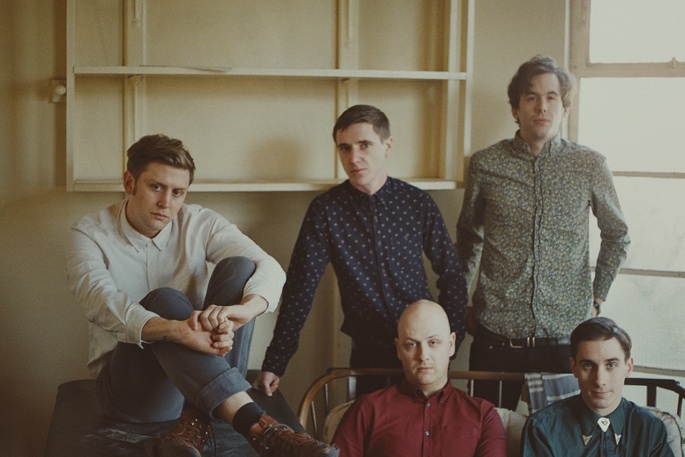 “That must have been the best gig we’ve ever played in London,” says Andy Hunt, lead vocalist and guitarist of Outfit, backstage after their show at the Sebright Arms.

“…last time we were here,” interrupts Tom Gorton, co-vocalist and snyth operative, “we played at a real shite venue that charged us £5 for a pint of beer!” he recalls with deadpan contemptuousness.

Friends since they were teenagers, Hunt and Gorton – the brains behind Liverpool’s most-tipped new band – have a habit of finishing one another’s sentences.

“Tom and I had a love affair starting when we were 18” jokes Hunt. “We used to make music in Andy’s bedroom,” chimes in Gorton. “I had a house – he didn’t have a house,” Hunt clarifies with affected primness, “he’d come round and mooch upon me and we’d make electro-pop in the vein of New Order and Depeche Mode.”

The first song recorded by the pair was written by Gorton and arranged by Hunt. “It was about a mate of mine who was really insistent that I should get a job. He was working at this Chinese take-away,” explains Gorton. “He kept bugging me about it. I kept telling him: ‘Look, I’m not interested in working in a Chinese restaurant’.”

Hailing “over the water” from Liverpool in Merseyside, Hunt and Gorton developed musically within Liverpool-proper, playing in several local bands including Indica Ritual – “a math rock Devo” – and the avant-garde experimental organization, a.P.A.t.T.

“When we were 19 or 20 we were playing in three bands each so it would be disingenuous to say Liverpool didn’t have a huge effect on us but we don’t consider ourselves as a ‘Scouse band’.” They do however agree on many of the key local musical issues such as the prodigy of The Coral and Ladytron, although they strongly disagree on the on whether Clinic’s 2010 album Bubblegum was a successful departure from the band’s earlier material.

Their friendship has clearly served them well both in the studio and on-stage, as evidenced by their electrifying performance at last Thursday at the Sebright Arms.Outfit ran through almost all of the exceptional synth-washed pop tunes off their soon-to-be-released debut album, Performance, with a tightness that belied how little their current line-up has toured the songs.

“I had a house – he didn’t have a house. He’d come round and mooch upon me and we’d make electro-pop.”

Gorton’s intricate synth-work and the heavy use of guitar peddles by Nick Hunt – Andy’s brother –are overlain with Hunt’s dexterous vocal melodies, at times sharing the effete quality of Dutch Uncles’ Duncan Wallis, elsewhere more akin to Hot Chip’s Alexis Taylor. Outfit opened with ‘Nothing Big’, building for several minutes with swooning, minor-scale melodies and ambient guitar effects, before bursting into a chorus a shade off euphoric. Another notable song, ‘Spraypaint’, sounds like a James Bond theme tune, subverted through 70s-prog and glam rock guitar work.

The Hot Chip comparison is not lost on Hunt. “Even though I think we make different music, I completely get the connection,” he explains, “Our record is influenced texturally and sonically by a lot of bands Hot Chip are also influenced by, like This Heat and Cluster.”

“We’re trying to convey a sense of optimism through a veil of despair,” says Gorton, “I’m very confident about the new album. I honestly think it’s really, really good.”

The band’s excitement about their upcoming album, due out on Double Denim on August 12 – Hunt’s birthday, incidentally – is palpable, an excitement that is completely justified. Performance is an extraordinarily accomplished pop album that blows many of Outfit’s better-known progressive-indie contemporaries like Django Django and Everything Everything out of the water.

“The songs on the album are basically about being in your 20s, having this sense of ennui and being confused about what you’re meant to do,” says Hunt. “But at the same time there’s a sense of purpose and ambition which has a potential to transform.”

“Similarly when you’re living your life, you are presented with points in time when your life could go in one way or another – they’re the most exciting bits of your life and they are what we try and tap into on our record.”