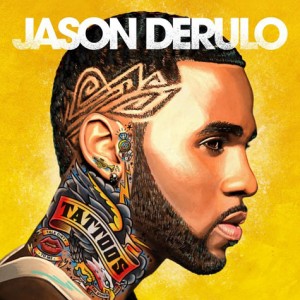 How to be really, really hip in music journalism, lesson #1: when reviewing shit records the party line is thus – low culture reveals as much about the times we live in as high art. For example, were the music fan looking for an insight into the collective psychology of generation Facebook, the right-on journo might tell you that Farrah Abraham’s My Teenage Dream Ended – an apocalyptically heinous, reaper’s lullaby of a record, is more illuminating of the zeitgeist than, say, the work of Hype Williams. There are many more examples.

For the sake of argument, let’s assume for one moment that Jason Derulo’s Tattoos is one such cultural barometer. What, pray tell, does the Floridian’s third studio album have to say about the greater social context in which it finds itself? Well, put it this way – intellectualise this shit all you want, but shit it remains. The only truths to be gleaned from Tattoos are as follows. Number 1: the general public – the record buying portion at least – are half-wits. Number 2: the world, as Jarvis Cocker once sang, is still run by cunts. Put another way – it is businessmen who made Tattoos, and they know just what the people want: massive dead-eyed bastard-ry of the highest order.

This is cheap and nasty music, from the music to the lyrics. It’s like listening to a 13 year-old porn addict recount his most spunky fantasies to the soundtrack of some Essex spice boy’s summer sex mix; a dystopian jape devised by and for the type of men who, were this Poland in 1943, would be firing Lugers at mass graves for the amusement of one-eyed townspeople. All there is to know about Tattoos is contained on ‘Side FX’, in which Jason leaves his latest quarry to wait it out at the local Holiday Inn “with [her] hands up high and pants down low” until the star feels ready to administer his patented Derulo-brand monster fuck; but only under the proviso that he can keep his Nikes on during the act. I mean, firstly, why does Jason Derulo have to be such a dick? And secondly, while I can’t speak for everyone, referring to a woman’s unmentionables as ‘pants’ isn’t exactly the stuff of scintillating aural foreplay. But that’s OK, cause didn’t he offer to film his performance on his iPhone 5? Come back Robin Thicke, you rat-faced rape cad you, because all is forgiven.

Tattoos is a disjointed hotchpotch of incompatible tones, styles and sentiment – a product of today’s collectivised producer system whereby long-players are constructed like playlists. A gallery of trending white noise pop tropes blur into one, merging then with the equally anonymous presence that is the nondescript Derulo. There’s lead single ‘The Other Side’ – roughly pop’s 192nd Katy Perry rip-off – while the aforementioned ‘Side FX’, featuring a down-on-his-luck The Game and a lyrical conceit centred around prescription drug use as a metaphor for sex with Jason, approximates the kind of cheesy Latino pop popular with BNP-sympathising Jason Statham fans and depressed housewives the world over. You’d think that if an artist is going to plagiarise a sound they’d least make it a good one, but then Derulo’s a tasteless and deadened zero man whose only contribution to the cultural landscape is bad ink and oversized biker jackets. If he was a film he’d be The Fast And The Furious. That said, when he does make moves towards a better quality of music, as with ‘With The Lights On’ and its play for Nicki Minaj-style robo-pop, the results are disgracefully pallid and decidedly embarrassing. It doesn’t help matters that, in his infinite aesthetic wisdom, Derulo underlays the track’s automaton stylings with Spanish guitar.

Aside from the glut of undoubtedly focus group-approved nods to Caribbean music (which also involve Derulo affecting a Caribbean patois), the other style dominating Tattoos is one unique in male r’n’b music to Derulo alone. Many of the tracks here are, by any other name, shitty girl pop – only overdubbed by a male vocalist. And they are shitty in the way that only shitty girl-pop can be. ‘Marry Me’ is essentially midwestern mall-pop with club beats, while Tattoos’ title track is similar in that it’s the kind of music only adolescents would enjoy. Add a couple of supporting singers and you’ve got the vanilla, sexless dance balladry of a One Direction song. Say what you will about The Weeknd and the Canadian’s brand horrorific misogyny, but at least Tesfaye’s target demographic is adult and not female minors. The Disney, tween-baiting love songs here render the garishly sexual tracks elsewhere 1000 times more sinister.

Alas, you throw enough money at a project and you’re going to get at least something in return. What with the horribly glued-together songwriting made up of so many parts, the album’s smattering of grace notes come not in the form of whole songs but rather in the shape of little hooks, micro-sections and short transitions. These include ‘Side FX”s jarringly incongruous but pretty ace sample-flip refrain, ‘Talk Dirty”s goofily pervy zurna break – indicating Derulo at least has a sense of humour – and thirdly the titular brass motif on ‘Trumpets’, its twinkly-eyed ebullience dovetailing with Derulo’s gushy tributes to girlfriend Sparks in a way that’s quite touching in its candid un-coolness. I mean, sure, he’s basically happy because he’s got a boner (sample quote: “Is it weird that I hear trumpets when your turnin’ me on?”), while elsewhere the track features such heart-melting lyrics as “Your ass remind me off a Kanye West song” and weirder still, “Your bra remind me of a Coldplay song”, but still.

But these are but mere drops in the ocean; an ocean of, y’know, sulphuric demon-turd. It’s down to r’n’b artists like Derulo that Frank Ocean’s Channel Orange was such a special prospect in the context of the genre. There’s a dignity to Ocean’s music – something that shit-munchers like Jason could never hope to emulate in a million years. Ocean’s lyrical profile, which dared to deviate from the homogenised norms of conspicuous consumption and ‘fuckin’ problems’, and was as such unceremoniously pigeonholed by trite commentators as ‘indie’, involved an atypical spread of soul-mining existential uncertainty, despair and themes of frailty, and documented Ocean’s humble, acutely human quest to live well, be happy and ponder whether the person he had become in adulthood was someone he could bear living with. Then you’ve got Derulo, with his pants, dicks, big dicks, big pants, even bigger dicks and iPhone 5s. If you think this sounds like standard backpacker rhetoric then you’d be right. But there’s no defence for mainstream r’n’b’s unending duplication. Ultimately, it’s a failure of imagination – reflecting either a deficiency of talent and/or invention on Derulo’s part or his complete contempt for the listener. It is either that he can’t be bothered to make music of worth or it is beyond him. Granted, we’re talking about the charts here: shallowness is often par for the course. And music will always have a place for dumb club hits. But the fact remains, what it comes down to is the massive gulf between soul-less music and music of the soul.