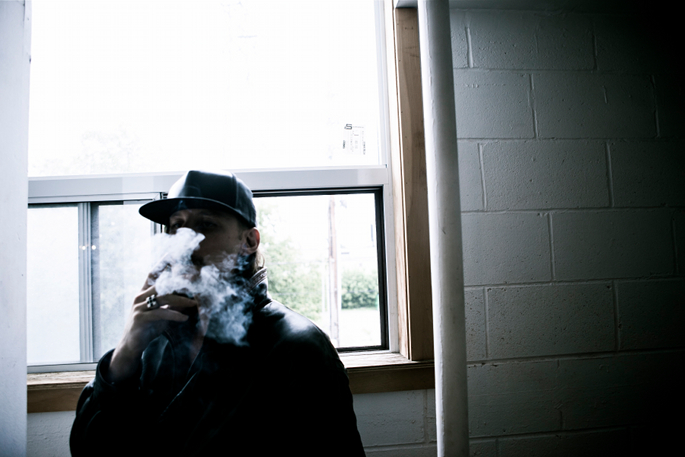 Psutka’s 2010 The Only Way Up EP, one of the very first releases on the then-fledgling Night Slugs imprint, offered pranging, elasticated house, very much in keeping UK funky’s brittle swing. 2011’s Bible Eyes LP, however, belonged to a different genus altogether, tilting from sturdy club music (‘Recital (A Version)’, ‘Liberation Front’) to extended ambient interludes and beat sketches; like Night Slugs confrere Jam City’s Classical Curves, it was an album that proceeded by some cryptic interior logic, making as much use of dead space as it did kick drums.

Having spent some time pursuing his psychedelic Hiawatha project, Psutka has reactivated the Egyptrixx moniker for a new LP, A/B To Infinity, and it’s a much more furtive proposition, pulling from kosmische (‘A/B Til Infinity’), GAS-style ambient techno (‘Bad Boy’) and the sort of uncanny valley sonics Oneohtrix Point Never mined so successfully on this year’s R Plus Seven. Even the most danceable track, seething techno track ‘Water’, feel designed to wrongfoot. We caught up with the Canadian to discuss his new album – and Rob Ford to boot.

“I’m very into parameters and rules.”

A/B To Infinity certainly feels like a darker, more elliptical record than Bible Eyes. What motivated that change?

This is definitely a semantic point, but I wouldn’t characterise the difference between the two records as a “change” – maybe a progression or narrowing. Bible Eyes was the first Egyptrixx record and pretty open-ended in focus. I was messing around with different sounds and potential directions. Now, a few years on, I have a better understanding of this project and what I would like to accomplish with it, and so the records are getting more concise. This record does a lot less, and that’s great, honestly. I’m very into parameters and rules. After the (long) Bible Eyes tour, I took some time to work on other projects and came back to this with a pretty clear understanding of where it would go. Egyptrixx feels like a sector of my imagination and the music and artwork is the process of articulating or describing that. This record and the next one are basically just me soundtracking my own imagination, if that makes sense.

Has your recent Hiawatha output shaped your Egyptrixx output? Or are the two very much partitioned?

Both projects are fairly independent of one another, I use different writing methods, instruments, people, structural rules, thematic content, performance setups etc. But they influence one another in that the existence of both allows the separate projects to be more clarified and concise. It was actually a bit of a revelation and a relief to launch Hiawatha because it gave me another outlet for creative goals that didn’t fit into the scope or rules of Egyptrixx. Bad things can happen when you start trying to force ideas where they don’t belong. My production work and collaborative work outside these two projects helps in the same way – more outlets for ideas.

Your “influences” mixtape for Night Slugs is full of interesting non-dancefloor choices – Wolf Eyes, Elian Radigue, Moin, etc. How do those industrial/noise influences feed into the record? You’ve certainly not gone down the scruffy, overdriven techno route being put forward by L.I.E.S., etc.

I’ve never really thought of Egyptrixx as a dancefloor project, honestly. This certainly isn’t a dancefloor record. It’s ‘club music’ mostly because of the ingredients – pulse-y bass sounds, synths, drum machines and some compositional references – but its definitely a stretch to think the music is written for the dancefloor. If anything, its more about using the traditional elements of club music together in a non-traditional way to recreate a certain atmosphere or feeling. I think the mixtape showcased some great melodic, textural and percussive ideas, which hopefully turn up on the album.

A lot of A/B To Infinity – ‘Adult’ and ‘Bad Boy’ spring to mind –  has a cinematic quality. Do you work with other media in mind? Would you like to start scoring for film or video?

I worked on this record start-to-finish with visual artist ANF and premiered some of the A/V content on Boiler Room this week. It was a cross-media collaboration in the sense that we developed a set of rules and stylistic objectives to apply to both the music and the visuals. I don’t think “cinematic” is the right word since it insinuates a coherent narrative or storyline even, which could never really be – but I’ve always had a strong visual feeling from Egyptrixx music, especially this album.

What’s the thinking behind the title? It’s not a Souls Of Mischief nod, is it?

The title is a loose reference to the basic themes of the record – reductionism, repetition, tranquility. Definitely has nothing to do with Souls Of Mischief.

You’ve been with Night Slugs since the label began. What’s it been like growing your career with the label?

I’ve enjoyed being a part of it and have honestly learned a lot from the group. Everyone involved are such vivid artists with distinct, interesting things to say – it’s been cool watching everyone grow and refine the individual projects. I think that despite the somewhat ADHD nature of club or electronic music, the Night Slugs bunch are on a very steady trajectory and has a lot more to offer. One thing I’ve enjoyed is how eclectic the sounds are for such a focused creative statement, which I think demonstrates that the identity of the label is more of an idea than a sound.

Forgive us a trivial question, but since the spotlight is on Toronto at the moment  – how long are you giving Rob Ford?

Haha, that boy needs to let me teach him how to meditate…world champion fuck-up.