Machines for Living: reinventing the Kraftwerk back catalogue 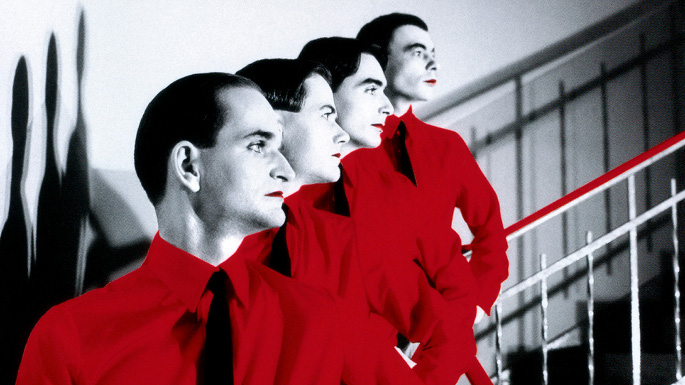 2013’s Kraftwerk residency at the Turbine Hall was undoubtedly one of the most hotly anticipated events of last year.

With the Tate’s ticket office blowing a fuse at the unprecedented demand and diehard fans freezing outside the museum for hours in the vain hope of returns, love for the radioactive Maschinen-Menschen has probably never been greater.

In the event, audiences were treated to a pristine rendition of the group’s greatest hits delivered by four anonymous Tron programs, standing nearly motionless behind oblique workstations, while the work of engaging the crowd was outsourced to an awe-inspiring 3D backdrop.

For those who were there, the experience, undoubtedly, was unforgettable, and few would question the quality of the music performed. But for the people behind the Science Museum’s imminent Kraftwerk Uncovered event, there is another side to the group that may have got lost amidst all the digital pomp and neon lights.

For James Poke, flautist and creative director to the group Icebreaker who will be performing the new versions of their music, Kraftwerk were at their most interesting in the late seventies “when they were playing at being robots but hadn’t actually totally programmed everything. So there was an interface between the robotic and the human. Later on,” he continues, “it becomes so robotic that that tension was lost.”

It’s a position shared by J. Peter Schwalm, the composer responsible for the Kraftwerk arrangements being performed by Icebreaker. Schwalm told me about a conversation he once had with Brian Eno after which both agreed that “Kraftwerk’s music was best when the technology and the machines were not perfect yet. When you listen to some of the older recordings and put them into a computer, you realise that even the sequenced music of Kraftwerk is running out of sync quite strongly. So you may have all the machines – but there’s a fragility that sounds very human.”

Part of the intention behind the forthcoming concert at the Science Museum and subsequent nationwide tour, then, is, as Poke puts it, “to go back and re-humanise” Kraftwerk, “to open people’s ears up to hearing them in a different way.”

The “Eno connection” was part of what brought composer and group together. Schwalm had spent much of the eighties and nineties recording “ambient soundscapes built around weird time signature drumbeats” under the name Slop Shop. Eno heard these records and sent Schwalm a fax to say it was the best thing he had heard in years and how would he like to collaborate on an album of “space-jazz”?

That album, Drawn from Life, was released by Opal Records in 2001 and the pair went on to work together on film soundtracks, art installations, and several live concerts, culminating in Schwalm’s first solo album under his own name, titled Musikain and released in 2006 with input from Eno alongside Imogen Heap and others.

Meanwhile, in 2009, the Science Museum’s head of research and public history, Tim Boon wanted to do something to commemorate the fortieth anniversary of the moon landing. He invited Icebreaker to perform the first live interpretation of Eno’s Apollo album, which up until that point had existed only as a studio project. “It was a bit of a departure from our point of view,” Poke told me, “because most of our music is fast and furious not slow and ambient, but the idea of taking on one of the great Eno albums was really appealing. 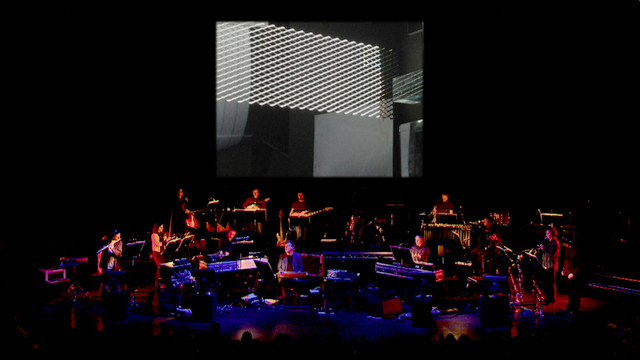 Icebreaker had formed twenty years earlier in 1989, bringing together musicians from diverse backgrounds in rock, jazz, and classical music who were excited by certain new developments in contemporary music but frustrated by the stuffiness of the conservatoire. With a mixture of flutes and clarinets with electric guitars, keyboards, and drums, “it’s very much not a classical line-up”, as Poke insists. Still, with a repertoire mixing the minimalism of Steve Reich and Philip Glass with oddballs and iconoclasts from Louis Andriessen to Barry Adamson, they’ve grown into one of Britain’s most acclaimed new music groups, equally comfortable at Meltdown, Bestival, the ICA, or the Aldeburgh Proms.

“I think in fifty years, you’re not really going to see a distinction,” Poke told me. “They’re going to look back and see the second half of the twentieth century as a hugely creative period with lots of great music, much of which will have lasted. But most of that music is probably going to be things that weren’t taken seriously by the classical music establishment.”

This is a change in attitude that Poke sees taking place already. “When we first started we were very much outside the establishment and battling against it,” he says. “Minimalism was considered by most of the classical world as a complete no-no and now it’s totally mainstream. And nonclassical music has gradually infiltrated into classical areas too.” He points in particular to figures like Frank Zappa, Robin Rimbaud (aka Scanner), and Aphex Twin who have made successful inroads into the once-cloistered world of the concert hall.

In response, Icebreaker have found themselves redefining their own focus. Future projects will see them working with turntablists, DJs, electronic artists, and bringing in more elements of improvisation and indeterminacy. Part and parcel of that process of redefinition is the project that’s gearing up to present a kind of re-examination of electronic music history through live instruments. First, Eno, now Kraftwerk, and later in the year they intend to bring it up to date with the music of Venetian Snares.

After Eno, “Kraftwerk seemed like the next logical step,” Poke explains. “If you’re dealing with electronic music, then the founding fathers of all modern electronica are really Eno and Kraftwerk. Without them, electronic music as we know it today just wouldn’t exist.”

But the last thing Icebreaker wanted was to end up as a “Kraftwerk covers band”, so J. Peter Schwalm was brought in via a mutual friend (artist and film-maker Sophie Clements who will be providing visuals for the shows) to creatively re-interpret Kraftwerk’s music in a way that would “explore the idea of technology being used to make music” whilst simultaneously “re-interacting with the human side.”

For Schwalm, growing up in West Germany in the 70s and 80s, Kraftwerk were part of his “daily soundtrack” almost since birth. Such over-familiarity made it all the more difficult, he tells me, “to find the right approach to transform their music into something new.” Finally, he decided to follow Ralph and Florian more in spirit than in letter, pushing towards a music “which could only be created with today’s technology, like they did in the past with yesterday’s.”

The method he arrived at was to begin with a fairly straight arrangement of the material, then do a kind of ‘live remix’ of that at home with a battery of outboard effects and processors before feeding that back into the computer and scoring out a new arrangement based on the new mix. “I wanted to have the freedom to do whatever I want with Kraftwerk’s music,” he told me. “I can work more freely when I approach a piece of music with the mind of a remixer.”

The result is a true “creative exploration” of the music of Kraftwerk which sounds fresh and unexpected while still retaining enough of the original to please the fans. “Anyone who is at all familiar with Kraftwerk will pick up on quite a few of the themes,” Poke assures me. “But it’s very much not Icebreaker playing Krafwerk. It’s a re-imagination of Kraftwerk.”

I’d been chatting with Poke for the best part of an hour before I finally got down to the crux of the matter: if this is a contemporary classical ensemble re-interpreting one of the seminal groups in the history of techno, will there be dancing?

“Most of the concerts will be seated,” he granted. But for the few that aren’t? “Yeah, certainly. I would hope that there would.”

The Science Museum in London presents Kraftwerk Uncovered: A Future Past on Friday January 24th with live performances by Icebreaker along with string arrangements performed by the Balanescu Quartet plus talks by David Toop and Richard Witts. After that, Icebreaker will be taking the show on tour with performances in Liverpool (February 5th), Manchester (6th), Birmingham (8th), Nottingham (12th), Dublin (March 8th), and Cambridge (May 2nd) For more information see icebreaker.org.uk