Murder Ballads: an interview with Slint 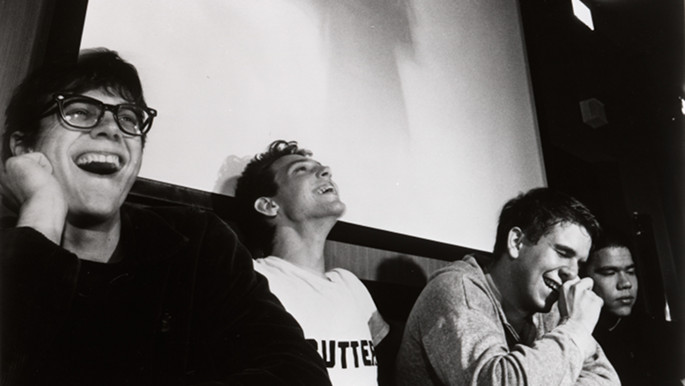 “When I first heard Brian McMahan whisper the pathetic words to ‘Washer’, I was embarrassed for him. When I listened to the song again, the content eluded me and I was staggered by the sophistication and subtle beauty of the [guitar] phrasing. The third time, the story made me sad nearly to tears. Genius.” – Steve Albini on Slint’s Spiderland, 1991

Britt Walford, beautifully oblique and tenderly separated from reality, is an almost impenetrably mysterious man to interview. But should we have expected anything other than mystery from the co-architect of Spiderland?

Released in 1991, Spiderland came and went without so much as a ripple. And soon after its release the album’s authors – Brian McMahan, Todd Brashear, David Pajo on lead guitar and drummer Britt Walford – went their separate ways, never to record again as Slint. All that remained was rumours and lore: talk of McMahan’s nervous breakdown or of occult seances in the making of the album, and of a rock album so great that the lucky few who’d heard Spiderland spoke of it in quasi-mythical terms.

Like Unknown Pleasures before it, Spiderland seemed more than just another frivolous tendril of pop culture. Rather, it was as if somewhere within Slint’s doomed, redefining deconstruction of rock was writ some essential truth – some cure for the modern condition, or at least an explanation. Featured in his eulogy for Ian Curtis in June 1980, Paul Morley’s summation of Joy Division could just as easily have been written about Spiderland:

“Good rock music – the palatable, topical stuff – is an amusement and an entertainment. But the very best rock music is created by individuals and musicians obsessive and eloquent enough to inspect and judge destinies and systems with artistic totality and sometimes tragic necessity; music with laws of its own, a drama of its own. The face of rock music is changed by those who introduce to the language new tones, new tunes and new visions.”

Speaking with FACT from a cold and grey Louisville afternoon, Britt Walford recounts the making of Spiderland, revealing a few of the album’s more unlikely reference points along the way.

“We would hear of murder and child abuse in Louisville, but in my experience, growing up in the city was kind of like an E.T-style childhood. Kids around our way were happy.”

Would you describe Louisville as a dark place to grow up in? If the Spiderland myth-makers are to be believed, a strange undertow of dread, a kind of black magic feel, imbues Louisville.

Well these days Louisville is kind of a tense city, divided between rich and poor, right and left wing. But man, I’d actually say that growing up in Louisville was a wonderful, beautiful time. I mean, back then we would hear of murder and child abuse in Louisville, but in my experience, growing up in the city was kind of like an E.T-style childhood. Kids around our way were happy.

What I would say is that, if on Spiderland we did tap into Louisville’s dark side, its dark history, it was only because we were comfortable enough to entertain such notions. That’s a luxury of being happy and secure.

How would you account for/describe the change in Slint’s sound that occurred between the making of Tweez and the making of Spiderland?

Well we were interested in organic, clean guitar sounds – the guitar-sound on Spiderland – well before Tweez. In fact, that was what the entire idea for the band was based on. But although we had this vision for how Tweez was going to sound, when we came to actually make the record we ended up just having fun and went too apeshit, so in the end it didn’t end up sounding how we intended it to. It was Spiderland that ended up being much closer to this vision, even if like Tweez it too developed into this heavy, distorted thing.

Whether consciously or unconsciously, were there any artists you were influenced by in the making of Spiderland? Specifically, artists from outside the punk/rock tradition?

Yeah. People like Neil Young. Or Leonard Cohen. Cohen’s songwriting, especially. Also, lyrically Nick Cave’s The Good Son was a huge influence on us. Back then, Cave was saying things that no one had ever said before.

Also, I was listening to a whole lotta Madonna at the time. I think that had a big efect on Spiderland.

Well, like Spiderland, a lot of her music was sweet and finely crafted. Also, it just sounded really good. But I think it was more about the ‘bigness’ of her sound. It sounded…epic.

Apart from that, there was the fact that her music used real drums.

Slint came from a punk background, yet Spiderland was a very technical, measured album: ‘hardcore for nerds’ as some have called it. How did you go from punk to Spiderland‘s sound?

Well, personally speaking I was into classical music, which maybe had something to do with it. I’d trained in classical, as a classical pianist. But as a whole, I think all of us being into Big Black had the biggest effect – the way their music was hypnotic.

Would you place Spiderland in the post-rock canon?

Man, I suppose that term makes Spiderland sound interesting, and it seems like it kinda could make sense, but I really don’t feel I have enough of a handle on that term to comment. 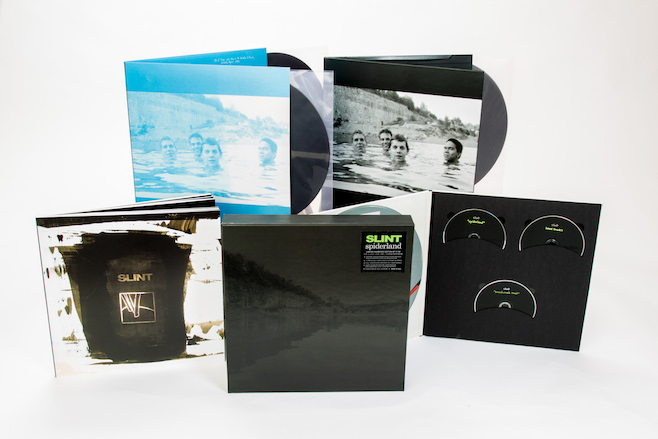 The story goes that Brian and you were bored of rock music. Which elements of rock in particular did you want to exclude from your sound when you came to make Spiderland?

As far as being ‘bored of rock’, that was something that had happened to me way before I met Brian, back when I was around 11 years old. I think that at the time of making Spiderland I probably had some disinclination towards guitar solos, but by the same measure I was also into a lot of music that did have guitar solos. So, who who knows? One thing that seems like a big influence on Spiderland was AC/DC: Brian and I were listening to Back In Black the whole time during making Spiderland. It was classic rock, but it was also economic, lean. I think Back In Black is for me the best-sounding record ever.

Why do you think repetition became such a big feature of your sound?

Well I suppose it was because I was really into Philip Glass back then. I suppose Big Black had repetition too.

Your Mum and Dad are interviewed throughout ‘Breadcrumb Trail’. What do they think about Spiderland‘s status as a classic?

I don’t really know, actually. I’ve never really spoken to them about it.

Why did you call the album Spiderland?

It was because, where we took the album’s cover photo, in the abandoned quarry we used to go to a lot, there were these spiders everywhere. This same species of spider. But for Brian, who came up with the title, I think it had more symbolic meaning. For Brian,’Spiderland’ symbolised the dark forces in the world, and evoked the idea of ‘feeding on things”.

And that mysterious first line of ‘Don, Aman’…“Don stepped outside”?

Actually, I wrote that song. It’s kind of about a guy at a party, and he goes outside to kind of…get back in touch with himself, ’cause he feels uncomfortable at the party.

Would you say that you guys are all quite introverted people?

I mean, I think i’m pretty much both, actually…both introverted and extroverted. And I think Brian and Todd are similar to me in that respect. Dave seems pretty introverted, though.

You say you had a happy upbringing. How then do you account for the reason why Spiderland ended up sounding so desolate, and tense, and well…sad?

I dunno, man. Maybe we were just more serious than the average 20-year olds, and looked more deeply into the things that most people see as common place.

Spiderland, released the same year as Nirvana’s Nevermind, seemed in synch with the national zeitgeist of that time, with the album running parallel with grunge, Generation X’s kind of ‘great cry of despair’. How do you see it?

Well I wasn’t aware of grunge at the time, so I dunno. Even though Spiderland was recorded in 1990, to me it’s a pre-’90s album. I suppose Spiderland was talking about some things that would come to fruition in the ’90s, but when we recorded it the ’90s hadn’t really happened yet. I don’t associate Spiderland with the ’90s, more with the ’80s. I feel like the ’90s were a weird time, but when I think of the ’80s I think of happy-go-lucky times. It’s kind of like that ’30-year cycle’ thing: where the ’80s are carefree like the ’50s.

Will you be touring the reissue?

Well we’re playing Primavera Sound festival. That’s all we have scheduled at the moment.

How has it been playing the record now after so many years?

It’s coming together more and more. Spiderland was pretty hard to go back to after years and years – this record that was really the only thing Slint ever did. But it was additionally challenging ’cause this is pretty complicated music.