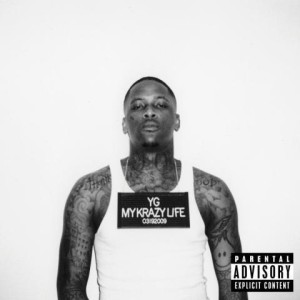 “Mustard on the beat, ho.” If you listen to rap and R&B, those five words are a Pavlovian trigger for what comes next: no doubt, a banging party rap track built with DJ Mustard’s reliable template, all sawtooth bass, one-note melodies, low-end slap, “hey” chants and finger clicks. You might be less familiar with YG, but the Compton rapper has been linked with Mustard since the start, commissioning some of the producer’s first beats (in fact, Mustard’s DJ drop is ripped from YG’s ‘I’m Good’). And while My Krazy Life is YG’s debut, it feels more like an album-length celebration of Mustard’s ratchet revolution, a sound distilled from LA G-Funk, Atlanta snap and Bay Area hyphy.

Like Good Kid, M.A.A.D. City before it, My Krazy Life revolves around a day-in-the-life narrative of our young Compton protagonist. YG is not shy about his Bloods affiliation (hence the anti-Crips spellings of Krazy and ‘Bicken Back Being Bool’), and his tales are thug life-obsessed. In that way, it’s reminiscent of Black Hippy’s other album, Schoolboy Q’s Oxymoron. The album alternates between gangbanging and headboard-banging; the latter offers nothing new but the former has its moments, like on the step-by-step guide to home robbery on ‘Meet the Flockers’. And while YG’s verses can be one-note, this is sing-along club music and the hooks are solid throughout.

As opposed to most major label rap releases, My Krazy Life is buoyed — not hindered — by its guest spots. Kendrick Lamar and Drake add lyrical heft, and the hooks are handled by some of the best in the game: Rich Homie Quan, TeeFlii, Ty Dolla Sign, and newcomer Tory Lanez. The real star, unsurprisingly, is Mustard’s beatcraft, which sees the producer working with new sounds (some G-Funkified Moog squeal is added to his arsenal) and new collaborators (C-Ballin and Terrance Martin keep things fresh), resulting in an album that is seamless and cohesive but never boring.

Everyone involved seems obsessed with catapulting My Krazy Life into the rap canon, with Mustard and YG as the new Dre and Snoop. There are lyrics borrowed from ‘The Watcher’ and ‘The Next Episode’ and plenty interpolations of West Coast classics; Drake’s verse on ‘Who Do You Love’ reworks Rappin’ 4-Tay’s ‘Playaz Club’. The album closes with the sax-laced ‘Sorry Momma’, the requisite apology-to-mom that recalls similar efforts by 2Pac and Kanye. But while hyper-self-aware moves like that might complete the West Coast rap ouroboros, there are no shortcuts with making a classic album. Time will tell if this is the beginning of a new era for hip-hop or simply a time capsule of a sound that had its day in the sun.