Grrrl Power: Kathleen Hanna on the legacy of Bikini Kill 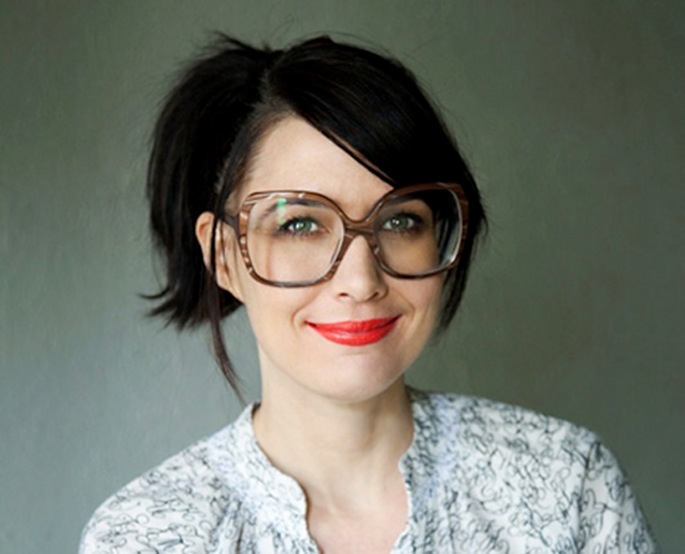 In the late 1980s, sat in her arts university library, Kathleen Hanna listened to Pixies, gutted illustrations from feminist literature and, fingers gluey, cut-and-pasted photomontages that railed against the patriarchy.

In the evening she did a variety of “gross jobs”, unideal for feminist and vegetarian: a stripper and a burger-flipper at McDonald’s. Something had to change.

Hanna recalls in The Punk Singer, a biopic documentary on her, how a conversation with ‘punk poet’ Kathy Acker sowed the seed for what would become Bikini Kill.

“She asked why I wanted to write, and I said, ‘Nobody has ever listened to me my whole life and I have all this stuff I want to say,'” says Hanna, over footage of her looking directly into the camera. “And she said, ‘Then why are you doing spoken word? You should be in a band because nobody goes to goes to spoken word but people go to see bands’, so I went home and I started a band.” 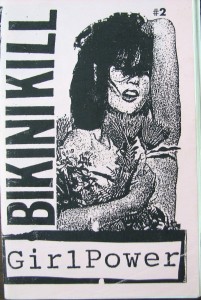 It is sometimes difficult for a generation to feel the shoulders of the giants beneath them. Building on the groundwork of the The Slits and local-outfit Neo Boys, Kathleen Hanna finally formed a band that refused to be viewed through a lens that had been designed by men. Bikini Kill meant that it was OK for alternative female musicians to do whatever the hell they wanted.  While their legacy is most conspicuous among their direct descendants – The Gossip, The Yeah Yeah Yeahs, Duchess Says, Love is All – plenty of female artists making alternative music today do so on the shoulders of Bikini Kill.

Under the banner of Riot Grrrl, the band helped propel the third-wave of feminism. Riot Grrrl was a loosely-connected network of bands and fanzines that sought to inspire girls to be proud of feminism, unpick the then almost exclusively male ‘mosh culture’ and – in Hanna’s case – use punk rock to beat misogyny out of people.

Bikini Kill rose above the so-called Sex Wars that had derailed the second-wave feminism of the 1960s and 1970s, which had fought for and won reproductive rights and the smashing of many glass ceilings in the workplace. They emphasized individualism, positivism, “grrrl power” – later bastardized by the Spice Girls – and the subversion of male sexual stereotypes. Hanna, careering around the stage in her underwear and a Black Flag t-shirt, was sexy, but she was not for men.

“I wanted to have fun, travel and use music to spread feminist theory,” Hanna told FACT, “mixing politics with music can be super-effective because so many fans are young and energetic and interested in changing things … it puts people who want change in the same room together.”

It is the footage of scenes from these rooms that is the The Punk Singer’s biggest triumph. The clips of a tiny Hanna commanding a stage, calling for sexual revolution and launching into songs like ‘Double Dare Ya‘ (“Don’t you talk out of line, Don’t go speaking out of your turn, Gotta listen to what the Man says, Time to make his stomach burn, Burn-burn- burn-burn!”) and ‘Sugar‘ best capture the power of Bikini Kill.

“It was shocking,” Lynn Breedlove of Queercore band Tribe8, explained in the film. “[Men] just weren’t expecting those kind of orders from that size of a person, that gender of a person in a fucking dress.”

The documentary traces Hanna’s career from her emergence as a spoken-word artist, through Bikini Kill, and on to her later projects like The Julie Ruin and Le Tigre.

What was most surprising was the hostility she got from the mainstream music press, which at the time largely completely missed the point, banally focusing on the aesthetics over the politics. “They do things like scrawl ‘SLUT’ and ‘RAPE’ across their torsos before gigs, produce fanzines with names like Girl Germs and hate the media’s guts,” wrote Kim France in 1993, “They’re called Riot Grrrls, and they’ve come for your daughters.”

“Flipside Magazine, a supposedly alternative publication wrote a review about us that just said the phrase ‘Fuck you’ 11 times,” Hanna told FACT. The Washington Post even ran a story, without interviewing Bikini Kill, which asserted the egregious untruth that Hanna had been raped by her father. The controversy and Bikini Kill’s eventual refusal to entertain journalists scared away major labels but the band paved the way for acts that the labels could sell to the mainstream.

The mid-1990s “angry women” phenomenon was clearly a neutered version of US Riot Grrrl bands. Artists like Alanis Morissette and Fiona Apple espoused a Potemkin feminism that demanded attention but retained enough conformism to make them a risk-free bet for A&R men.

The Punk Singer also shows how through Hanna’s personal relationships with Kurt Cobain – her best friend – and Ad-Rock – who she married – Bikini Kill directly influenced both Nirvana and the Beastie Boys.

It explains how Cobain was more influenced by “feminist art punk” than now-dated grunge bands like Pearl Jam and Mudhoney from the pacific north-west.

Ad-Rock went from writing songs like ‘Girls’ (“Girls, to do the dishes, Girls, to clean up my room, Girls, to do the laundry girls”) to – unsuccessfully – asking the Prodigy to refrain from playing ‘Smack My Bitch Up’ at 1998’s Reading Festival and making a lonely public stand against the rape at Woodstock in 1999.

But it is Pussy Riot, who have publicly acknowledged Bikini Kill’s influence, which are now their most powerful heirs. The dissident Russian punk band are using the platform Hanna helped build to further the fight to terrain including authoritarianism, capitalism, pollution and LGBT rights.

While Bikini Kill are not their only influence – they are disciples and heirs of tragic Soviet figures such as punk-poet Yanka Dyagileva and 1920s absurdist-poet Alexander Vvedensky – Pussy Riot share their civic courage and belief that society based on civil rights needs the help of the humanities and the arts.

“I definitely think that without the inclusion of things like LGBT rights and capitalist resistance, feminism will wither away and die,” Hanna explains to FACT, when Pussy Riot is bought up. “It can’t be just about one thing anymore.”