“I like there to be a lot of bass, a lot of grit”: Tinashe talks debut album and working with the best of the mainstream and underground 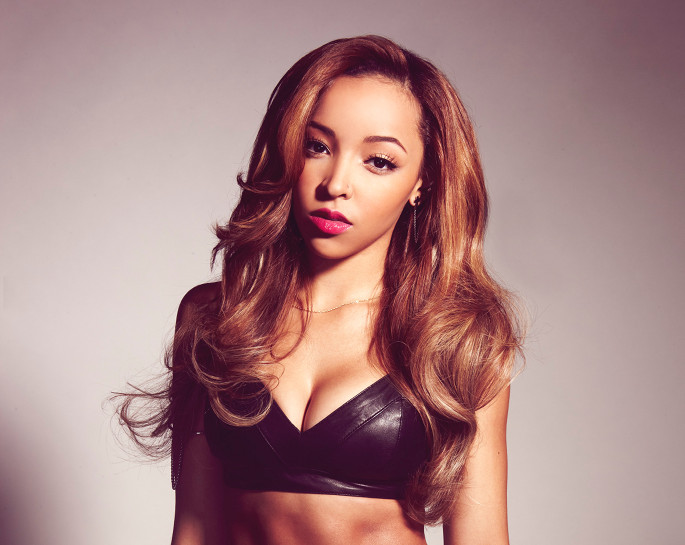 “I’m like, a huge perfectionist,” says LA-based singer and producer Tinashe, in her toothache-inducingly sweet California accent, referring to the debut album she’s been working on since 2013. Her voice pours itself down the long-distance phone line like syrup, but the determination that cuts through it is unmistakable.

Born in Kentucky but raised in the Californian sun, Tinashe says she can’t remember a time when she didn’t sing, or wasn’t encouraged to be musical by the family members she’d frequently perform for. “Age five is when I remember writing my first real song, with lyrics, a bridge, a verse…I remember I performed it at a piano recital that I had,” she recalls. “It was called ‘Deep in the Night’, and it was about being afraid, and about not having to be afraid because I’m here for you – so it was actually super deep and really mature for a five year old!” After landing parts in movies like Polar Express and a recurring role on Two And A Half Men as a child actor, she spent four years as part of a girl group called The Stunners, supporting Justin Bieber on tour in 2010.

That bio, not to mention the accent, imply that Tinashe’s solo music might sound a certain way: that’s where she takes a left turn. Her three mixtapes – the most recent being December’s gloomy Black Water, following 2012’s morbidly sexual In Case We Die and Reverie – have a subtle bite. With a light voice reminiscent of Cassie or Aaliyah, Tinashe’s strongest output yet has been the meaty stuff, using words and beats that aggressively play against her delicate ‘who, me?’ vocals. She’s flexed her melodies over the hardened bass of DJ Mustard (on her Schoolboy Q-featuring recent single ‘2 On’) and Boi-1da as well as the nostalgic melancholy of the likes of Jacques Greene, Dev Hynes and Ryan Hemsworth.

“I always like to play with stuff that’s more on the darker side of the spectrum,” she says. “I don’t think my music will ever be too happy or too bright…because I consider myself to have quite a ‘sweet’, quote unquote, voice. It’s high, it’s soft, and so I want to contrast that, have some juxtaposition in the beat. I like there to be a lot of bass, a lot of grit, I like it to be really dark and heavy.”

It’s in the knife-sharp hooks she sings as much as the production: take her 2012 track ‘Boss’, where she moans the double-edged “I know that you like it Daddy, when I ask you please…I know that you hate it when you see me with those other ni**ars, easy.” And make no mistake, the title of her 2013 Travi$ Scott-featuring sizzler ‘Vulnerable’ doesn’t refer to her, but to the dude she’s singing to: “now I got you drunk, actin’ vulnerable…” That piercing chorus (“don’t stop looking at me”) isn’t a cry for attention, it’s a seizing of control.

Tinashe’s upcoming album is full of this kind of weighty contrast, with Schoolboy Q, A$AP Rocky and Future all set to make large-looming cameos, while Mike WiLL Made It (as well as the aforementioned DJ Mustard and Boi-da) bring the bass. When I ask who she listens to in her free time, Tinashe rattles off James Blake, Little Dragon and Bon Iver as influences; it follows that she describes the LP as “a little bit more vibey, a little bit more ambience.”

Three mixtapes in two years and a Youtube channel stuffed full of self-made music videos say everything you need to know about Tinashe’s determination and unstoppable forward motion: she’s prolific as hell and constantly refining her sound. It’s been over a year since she started working on the record, and she’s made over 100 tracks in the process. As she said herself – she’s a huge perfectionist. To get into the right frame of mind to write she isolates herself in her car, cruising through muggy LA roads and singing to herself. “I listen to [the music] as I’m driving around, that puts me into the headspace of a listener. I try to visualise somebody hearing the track for the first time and what they’d want to hear.”

Did she take control of the album’s production too? “For this album, I’ve been working with some of the best producers in the game, so my own production up against theirs doesn’t compare,” she says. “But there are some moments of it on the album, for sure, some interludes that I produced. Vocally I produced a lot of the songs, I wrote them and mixed and recorded them in my home studio. Being hands-on in the process is really important for me.”

The album is due out on Sony/RCA toward the end of the summer, and deserves to be one of the most anticipated pop releases of the year. Tinashe might have come from a background that steered her in one direction, but she’s got both hands on the wheel now.