Crosswinds: The legendary Billy Cobham on Miles Davis, Mahavishnu Orchestra and Spectrum at 40 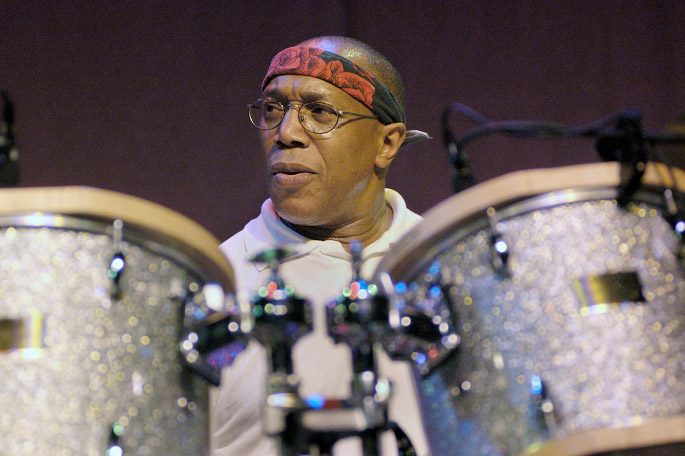 Billy Cobham is one of the most influential drummers of the twentieth century.

From gigging with Horace Silver and Herbie Hancock to sessions with Miles Davis and the formation of the pioneering Mahavishnu Orchestra, he helped expand the rhythmic possibilities in popular music, mixing jazz, rock and funk with a wild selection of odd time signatures that somehow always felt as toe-tapping natural as a mother’s pulse to a newborn baby. Free jazz percussionist and composer Gregg Bendian (of the group Interzone) once claimed that “anyone dealing with complex, dense or aggressive drumming today owes a debt of gratitude to Billy Cobham.” Cobham is also one of the more recognisably sampled drummers, with loops of his beats turning up in tunes by everyone from Gang Starr to Massive Attack. On the fortieth anniversary of his groundbreaking solo album Spectrum, I caught up the Panamanian powerhouse in the midst of a weeklong residency at Ronnie Scott’s last month.

For Billy Cobham, it all started around 1950, when he was just 6 or 7 years old, just shortly after his family moved to New York. Cobham’s piano-playing Dad had a gig that night and the drummer didn’t show, “So I was put on the bandstand, just for fun.” He doesn’t remember much about the concert itself – but what does stick in his mind is the lesson in economics his father gave him when the show was over. “I don’t know where I got in my head that I’d just worked a gig because after the gig was over I said, so how much do I get?”

Billy’s Dad looked him and said, “Ok, we’re gonna need to sit down and talk here. First things first, the clothes you have on – did you buy them? No. Okay. What about where you sleep? You pay rent? No. Uh huh. How about food? You buy the food? No. Uh huh. Every realise where all our money goes? Or comes from? It comes from things like this.” He’s chuckling at the memory as he recounts it, but this was beginning of Cobham’s entry into the harsh realities of the music industry. Still, even if that first gig didn’t pay, the boy was hooked.

Coming from a musical family, from as far back as he can remember there was always music in the house, “twenty-four seven, three hundred and sixty-five days a year.” From big bands like Duke Ellington’s and the Basey Band to classical music and regional Latin American music, “everything was around. And we had these big, huge Crossley tube radios with a big fifteen-inch woofer. Imagination ran rampant.”

He attended the prestigious Music and Art High School which nurtured the talents of Morton Feldman, Shorty Rogers, and Liza Minnelli, and was active in the St. Catherine Queens Men drum corps. After a stint in the U.S. Army Band in the mid-sixties, he went on to play in a trio with Billy Taylor led by the Connecticut-born hard bop pianist Horace Silver. It was while touring with this trio in Europe in 1968, right here at Ronnie Scott’s, that Cobham first met a guitarist who would have a decisive influence on his later career: John McLaughlin.

At that time McLaughlin was largely working as a session player with the likes of Brian Auger and Georgie Fame. He can be heard playing rhythm to Jimmy Page’s lead on records like Own Up by baroque pop group Twice as Much on the Immediate label, and Georgie Fame’s The Third Face of Fame. A year later, he would be recorded jamming with Jimi Hendrix at the Record Plant in New York. It would be in the group of another genre-mashing experimenter that McLaughlin and Cobham would find themselves re-united: Miles Davis.

Cobham had been playing a group called Dreams with John Abercrombie and the Brecker brothers, Michael and Randy. Dreams had a regular gig at a certain club and Miles’s group were playing downstairs. Jack DeJohnette was playing drums with Davis at that time, but he wanted to get out, so he asked Cobham if he’d be interested in taking his place. Sure, said Cobham. “He said, well, Miles is downstairs, I’ll tell him. He’ll probably come up and check you out. He never said that he would come and shake my hand or anything,” Cobham recounts. “Sure enough: big dark glasses sitting in the back. And when I was done, he was gone. As I understood, you don’t take it as an insult. It’s just, that’s how he is. That’s what he does.”

A few days later, Cobham’s girlfriend’s phone was ringing. She picked it up to be greeted by a blunt, coarse, sixty-cigarettes-a-day kind of voice: “Where’s Billy?” the voice demanded gruffly. “Who is this?” she said. “I ask the questions,” replied the smoker. “What?” Cobham’s girlfriend didn’t take too kindly to this. Hung up. The phone rang again. As Cobham tells it, they exchanged “a few four letter words. She wasn’t happy.”

Later that day, Billy gets home and his girlfriend is all upset. “You know my day’s really not been great,” she says.

“Some idiot called here and wanted to know where you were.”

“He could barely talk.”

Billy calls Miles straightaway. “Rehearsal’s at nine o’clock tomorrow morning. Be there.” Click. Miles hangs up. “So that’s how it started…” 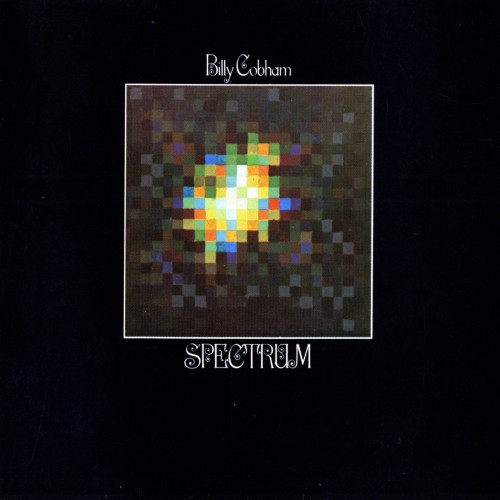 The next day, Cobham went round to the Davis residence and they went through some things. “He said, this is what I’d like you to do. He was a very strong manager of musicians. He knew who to put with whom to play what. It was probably the biggest lesson I learnt: just watching how he shuffled around the pawns that we were to make us do what we needed to do to get the right effect he was looking for.” Cobham played on the Bitches Brew sessions but his tune didn’t make cut; still, he can be heard on Live/Evil and he’s all over the Jack Johnson record, with ‘Right Off’ in particular finding Miles at his funkiest thanks to Cobham’s beefy heavy-hitting.

Cobham was working with Miles Davis in New York when he met John McLaughlin for the second time. “We had some sessions together and stuff,” Cobham recalls. “Then he asked me, you know, I have some stuff I’d like you to check out.” From those tentative gestures emerged The Mahavishnu Orchestra.

“We were in a small school of musicians that tended to help each other out whenever we could. In that same school of thought was, Joe Zawinul, Wayne Shorter, Miroslav Vitouš, Larry Coryell, Chick [Corea], Keith Jarrett. There was a bunch of us just sort of hanging. We had nothing else better to do – there was not a lot of work. So anybody that said, man, I’ve got some ideas, I want to just see how they sound… It was kind of natural to just sort of gravitate towards this one house where we would all kind of hang out. See who was doing what. Everybody would just listen or play, do something. Nothing was happening till the evening anyway – if we had a gig at all! A lot of things came together that way. Not a lot of talk. If you could play, you were there. ”

And when the group started really coming together and you started making the first records, were you aware of how original what you were doing was?

“No. This was happening on every street corner as far as I was concerned. I didn’t care really very much about history or the future. If we got something out of it, so be it. What I wanted to do more than anything else at that time was to have some steady work. That did not represent steady work to me. I was thinking more like getting onto a TV show, the Johnny Carson show or something. Getting into the union, doing TV, and jingles – that was where I wanted to go. And then this started happening and I was saying to myself: wow, that really would be funny. If people like this then I give up! Why? Because I like it, but I don’t imagine that anybody else would. And sure enough, people liked it.”

After the huge success of their first two albums, Mahavishnu split somewhat acrimoniously in 1973 (Cobham would later rejoin the group in the ’80s). Finding himself once more out of work, Billy set to work with Mahavishnu’s Moog player, Jam Hammer (later of the Miami Vice theme tune) and recording engineer, Ken Scott (who had worked with The Beatles) on what would become his first solo album, Spectrum.

Recorded in just ten days, at a cost of just $20,000, Spectrum would reach the top of the Billboard jazz charts. But Cobham tells me his initial impetus in making it was “desperation. I needed something to represent who I was and what I’d been doing, so I made a record with the idea that this was my calling card. Maybe it’ll sell maybe 500 units or so. Ok. But at least I can use it to say, I do this and I’d love to play in your club for a week and this is how the band sounds. Maybe I’ll get a gig, maybe not. Not three million units. I mean, it’s like, hello?”

He still has fond memories of those sessions. “Everybody was very positive and very supportive,” he tells me. But his proudest moment, he insists, is the album he’s only just now completed. Tales From the Skeleton Coast has been some two and a half years in the making, bringing together memories and sounds from Panama, Namibia, and Switzerland where Cobham relocated in the 1980s. A true Gesamtkunstwerk, Cobham is composer, producer, engineer, record label, and even front cover photographer. This record, he says, “was the hardest one for me to pull together.”

Cobham’s other new release looks back to his very first. Spectrum at Forty sees Cobham and a number of old friends returning to the material from that epochal record from 1974 along with some new material, all recorded while touring the United States. Returning to the compositions he first wrote when he was thirty years old, with time the tunes have “grown. You find that in the notes you select, those notes are played because you really want to play those notes. The spaces are there because that’s exactly where you want to have a space. So we’ve gotten to the point where music is really a reflection of our lifestyle.”