A Modest Proposal: tUnE-yArDs on starting from scratch, Pee Wee’s Playhouse and more 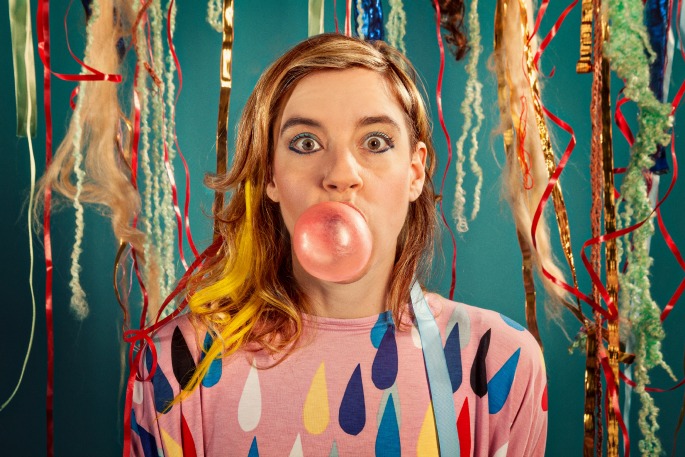 “Your music,” I suggest to Merrill Garbus, the autodidact studio nerd and streaky-haired ex-puppeteer behind three increasingly jaw-dropping, barely-classifiable albums as tUnE-yArDs, “it’s a bit of a hard sell, isn’t it?”

The New England native seems chipper about this assessment, and genuinely taken aback by her surprise introduction to the rock star lifestyle, with all the cab rides, make-up chairs and interminable press engagements it entails. A hard sell, you’d think – but more and more listeners are buying it.

“The whole thing feels really surreal,” says Garbus, who’s run out of fingers to count today’s interviews and photo shoots. She’s spent the day fielding questions about her forthcoming third album, Nikki Nack, her second for 4AD after the label signed her up on the strength of 2009’s self-released BiRd-BrAiNs, a tangle of scratchy fingerpicking, tinny drum loops and half-yodelled, half-whispered vocals recorded on a dictaphone. Let loose in the studio for 2012’s whokill, however, Garbus finessed her lo-fi roots into an assured cacophony of vocal acrobatics, skronk saxophone, booming hip-hop drums and ukulele loops. Easily one of the weirdest albums of the year, it earned her a place at the top of Village Voice’s Pazz & Jop poll and an army of new fans, many converted by her gotta-see-it-to-believe-it live shows.

But as you’d expect, Garbus isn’t keen on repeating herself. Burned out from touring and empty of inspiration, she ditched her chief songwriting tools – the loop pedal and the ukulele – in the hope of breaking new ground, as she sings on Nikki Nack’s opening track: “I tried to tell him all the reasons that I had to never sing again / And he replied, you better find a new way!”

“I felt dried up at the end of whokill. The ideas just weren’t flowing the way that they were earlier in my life,” she explains. “I had to let go of what whokill was, because I found myself wanting to please. I needed to step away and decide to do something new – not trash everything, but push myself in new directions and trust that my audience would come with me. And that was a terrifying leap.”

The resulting album is, on first listen, a tough nut to crack. The fiendish complexity of the arrangements – including a track built around a drum pattern that never repeats itself , plus her typical call-and-response chants and echoes – seems impenetrable to begin with, but as with whokill, it gradually reveals itself as endlessly catchy, crammed with melodic scraps that ricochet around your brain hours later. Leading the charge is first single ‘Water Fountain’, a hyperactive jump-rope anthem powered by buzzing synth lines and a typically elastic bassline from her songwriting partner Nate Brenner.

It’s an album that Garbus hopes “people can chew on for a long time, that isn’t instantaneously digestible and disposable”, but it didn’t come easily. Hunkering down in the studio for a rigorous, month-long demo process last January, she built up a library of more than 30 song ideas, each week focusing on just one element – first drum machines, including the FunkBox iPad app, then acoustic instruments, then just melodies with no rhythm at all. “And the fourth week was like, oh my god, I can’t do this anymore,” she sighs.

You make it sound like an office job, I say.

“Yeah. I got to meet Laurie Anderson this year, I had a meeting with her and I was late – embarrassingly late, and she was like, ‘I’m sorry I have to go to my studio at 11.’ And I realised that she just has studio hours – and the more songwriters and artists and creators that I read about, they do it like that too. Leonard Cohen, I think. And it is a job. I think the trick for me was forgiving myself when nothing would come of that.”

The arrangements are so complex now, do you feel any extra pressure or difficulties from being a self-taught musician? Or is it liberating?

“With the song ‘Left Behind’, the idea for that was a drum pattern that would never repeat. It started with ‘ba-ba-ba-ba’, and then this long slew of things that I could never memorise, and if I read music better or transcribed it better I would have be able to do that, you know? Maybe in the future I will. For me it all happens in ProTools now, essentially, because it’s too time-consuming for me to transcribe. I totally feel the limitation of not having [musical training], and also not having true vocal training. There’s a lot of tension in my voice that ought not to be there, which I’m trying to work out now, and that was a big part of taking lessons.”

I’d always assumed that your voice was the element that was trained, as part of your background in theatre? [Garbus was a puppeteer before embarking on the tUnE-yArDs project.]

“I had classical training in high school, but not rigorous training.”

Your voice is your weapon, really. Some of your vocals just make me think, how the hell did she even do that? Do you like to write vocal parts that challenge your abilities?

“I wanna say yes, but I’m thinking that it’s intuitive. A lot of it is improvisational. I was trying to iron out the yodel in my voice, because I had accentuated that for so long that my voice didn’t really know how to sing through that break. So yes, absolutely, I want to stretch the instrument, but stretching it healthily has been my latest challenge. I think all of this music is to become a better musician and to push myself, to push it to the limits.” 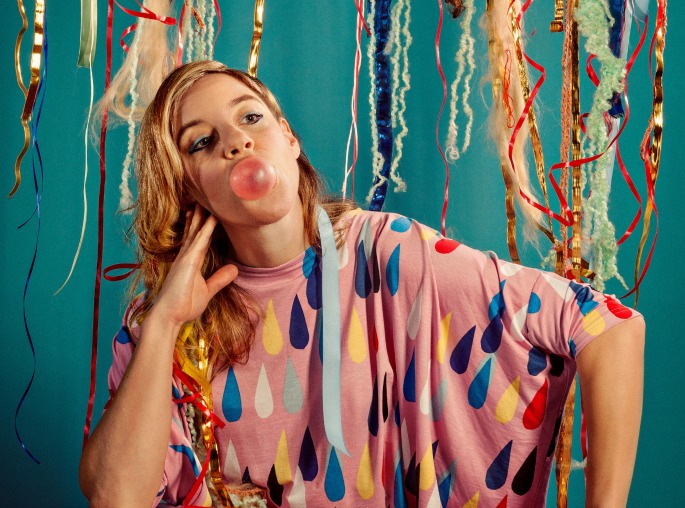 The strangest track on the album is ‘Why Do We Dine On the Tots’, which is almost like a piece of children’s theatre, but with an unusually gruesome plot. It might seems as if you’ve put it there to deter the casual listener.

[Laughs] “I didn’t necessarily want to drive people away, but it just feels like an honest part of where I’m at, I guess? Pee Wee’s Playhouse was a big inspiration that I went back to – I don’t know if you know it.”

We don’t have it here, but know what it is.

“Well, there’s that variety show sense to the album, it’s little bits – here’s this diva pop song bit, here’s this ’80s synth tune bit, here’s a recitation. I wrote that poem when I was a puppeteer and I was working on a show about a mother selling her kid to the butcher for money, based on Jonathan Swift’s A Modest Proposal. It was nice to go back to the old me, to say that this is still relevant, it still resonates with me, and now it can be a sound poem too.”

That childlike attitude is something that comes up a lot in tUnE-yArDs, as well as humour, even a sense of the grotesque. It’s very much the opposite of the cool indie-rock brigade.

It seem less horribly self aware than much of that music, I suppose. But do you ever come up with ideas that feel almost too silly, even too embarrassing for you to perform?

“I think it’s very clear when it’s coming from a true place, ‘cos I found that poem in a journal from eight years ago. In other words, if it feels contrived I know right away. With some lyrics I’m like, really? Do I have to? And my heart will say yes, you have to say that line. ‘Wait For A Minute’ is a song about addiction, which I’ve thought a lot about in the past year, and unfortunately those lyrics feel very true. It might sound cheesy, but if I feel that I truly understand them then I can sing them with integrity.”

I think it’s probably those lines that end up resonating most with listeners anyway.

African music has been a big influence on your work so far, especially going back to your time in Kenya many years ago, but this time you’ve drawn inspiration from a visit to Haiti.

“It was part of studying with our drum teacher Daniel Brevil, who’s Haitian, and our fundraising for his company to go to Haiti to do performances. I got to go to Haiti with Daniel, and the way that music plays an integral role in the spirituality and everyday life of people in Haiti… it’s just very moving, very striking, and it got me away from thinking about music like this [gestures to the photo shoot setting up nearby]. It’s great now because I’ve had a taste of what inspires the music, but when it’s just pushing the the record, doing festivals… I don’t care about getting another pair of free jeans, I just wanna feel like a person, you know?”

Particularly in the last year or so, there have been a lot of discussions about cultural appropriation in music.

“As there should be.”

Arcade Fire, for instance, were criticised by some for their own trip to Haiti while making Reflektor. How do you square that with your own experience?

“Well, Régine [Chassagne, of Arcade Fire] is Haitian, first of all. I think that she is from that culture and understands that culture. I also think that they have created such an awareness about Haiti. But I got to see vaudou ceremonies and I watched them write the vévé, which are those designs that they used for the Reflektor artwork, and it was hard to see that, because… [sighs] I just think that it’s always gonna walk a fine line. I mean, people are going hungry in Haiti – really hungry, in a way that I haven’t seen ever before, in Kenya or in any place that I’ve travelled. People are really, really hungry there, and that is so deep, it’s about our western economy and their economy, and how we totally exploit these economies and have done for generations. I asked Daniel, ‘Tell me if this is not okay’. And he was like, this is how your music is interacting with Haitian music, Haitian traditional music needs to keep being alive, and kept alive.”

And now I’m more likely to go and find out about it.

“I think so, that’s the best case scenario. And of course there’s a lot of crap in between there, and I will continue to try to fundraise and draw awareness because that’s how I can feel okay at night, you know?” 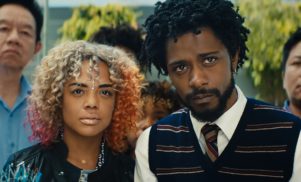 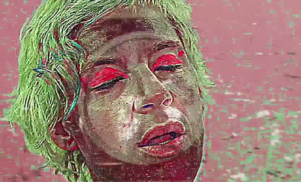 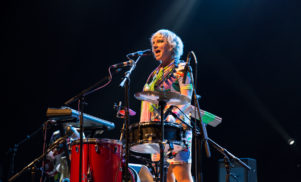 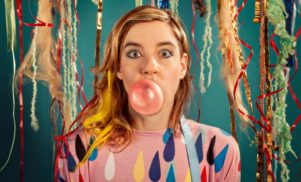 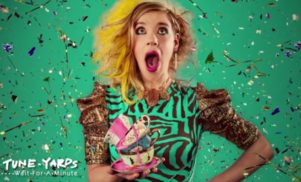 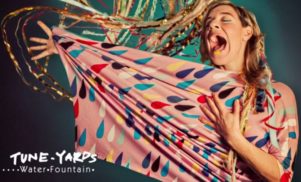 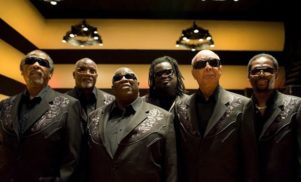 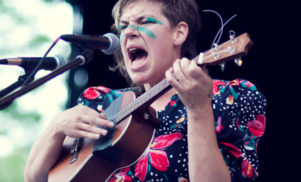