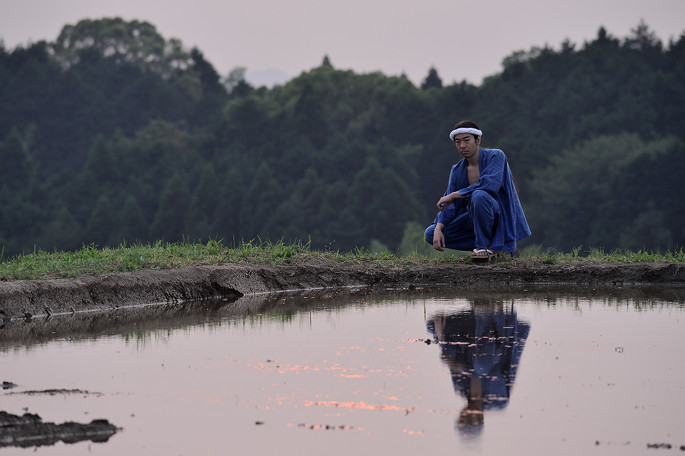 This is a story that’s in equal parts sad, strange and beautiful.

A couple of years ago I got invited to a showing of a film about music in Japan called KanZeOn; I think it was FACT’s Laurent Fintoni, a long time lover of Japanese music and culture, who put me on to it originally. It turned out to be amazing, a dreamy semi-documentary meditation on the art of listening, featuring some fascinating characters – including a lady in a tall hat who plays the “Sho” mouth organ along to the sounds of water, a teacher in a Buddhist university, some preternaturally sprightly old ladies, and a hip-hop monk.

This monk goes by the name of Tatsumi, and in KanZeOn we see him ringing the gongs and bells in his monastery, instructing said old ladies in scratch mixing and the meaning of hip-hop, and taking a microphone and amp out onto mountaintops and rope bridges through forests to beatbox along with the natural world. He also appeared at the showing of the film at the ICA, beatboxing, DJing and generally charming everyone there.

I stayed in touch with the film’s makers Tim Grabham and Neil Cantwell, who gave me some lovely field recordings and a new track for an article, then last month I got a bittersweet email from Cantwell. It contained a link for an album’s worth of amazing electronic music that it turned out Tatsumi had been making in his monastery bedroom studio: really unique stuff that swerved through genres and tempos, full of quirky melody, constant inventiveness and occasional passages of extreme beauty. But it also carried the news that at 34 years old he had been diagnosed with a gravely serious illness.

Tatsumi, it turns out, had been hoping to release his music all along, but tragically it took this news to spur him into action. He and the makers of KanZeOn are in the very early stages of piecing it together and finding labels and collaborators – amazingly, one of the first remix collaborations is going to be with Bristolian soca-junglists Jus Now – and have only put two tracks on Bandcamp as a taster, but there are hundreds of tracks complete or in progress, and even when confined to a hospital bed, Tatsumi continues to make more. I spoke to him via email with Cantwell as translator, to find out more about the background to these amazing tracks.

Can you remember when you first felt the urge to make music?

Since I was in the womb, my mother used to hold speakers up against her stomach so that I could hear music. Because my mother was working for Yamaha, my experience of music was chosen with a certain care when I was young – for example listening to classical music and learning to play an electric organ. So from that time I could play whatever melody popped into my head, or make my own arrangement of classical music, and that gave me a playful understanding of making music.

Then from the third year of elementary school (age 9/10), I started seeing hip-hop music on TV and began listening to club music after that. That experience had a big impact on me wanting to make music, and also the way that I do it. When I make a track, I don’t decide the style beforehand. It’s more that when I’m making the track on my computer, I try to compose something that reflects an image and enjoy how the music comes into my mind. There are many styles for making tracks, and so rather than just deciding on one genre, I want to make whatever comes to me, all genres.

At what age did you become a monk?

Have your temple been supportive of you making / performing music?

I am definitely supported. People sometimes say I am a monk and a musician. But in my own temple, there aren’t many musical events. For example, listening to J-pop and club music is popular with people who are 20-30 years old. Listening to J-pop or The Beatles or Western music is more popular with people who are 40-50. For people who are 60, 70 or 80, they listen to Japanese  folk music or Buddhist music or classical music and so sometimes we have classical or folk song concerts at the temple because of the age of most of the people who come there. 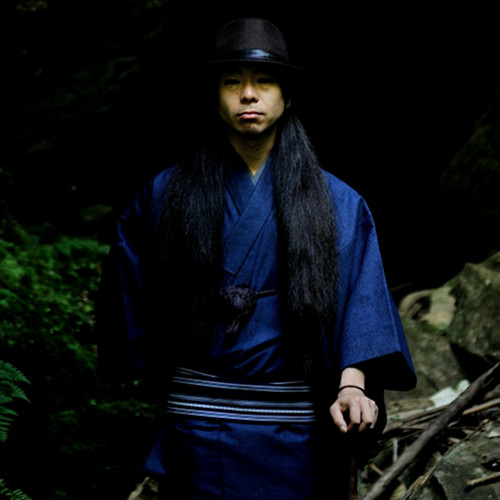 In the KanZeOn film we see you beatboxing in the forest, on the mountain etc – is this making music with nature something that you do very often?

I am not thinking about it every day when I am creating music, but when I get inspiration or an idea from being in nature then I will make something. When I want a more natural mood, I will go to be in nature to do some production, when I want to do production in the studio I’ll go to the studio, when I want to go to my house or my friend’s house, then I’ll go there to make music.

Neil tells me you are involved with skating, DJing etc in the city of Kumamoto – how often have you been able to get away from the temple to be involved with these things?

Yes, I am involved with street culture in Kumamoto, especially skating. I have been asked to make tracks for various skate shops or teams, or fashion shops or free magazines. I am a monk in the temple from morning til night, but then I use the free time at night for musical activities. But then I have to be back at the temple in time to start early in the morning.

How many tracks have you made now as a producer?

I don’t know, because I am making new tracks all the time!

Why did you not think of releasing the tracks to the wider world before now?

I had wanted to release the music before, and even though there was no shame when people listened to it, it is only now that I feel like my level of skill went up enough to want everyone around the world to hear it.

What do you hope listeners to get from listening to your tracks?