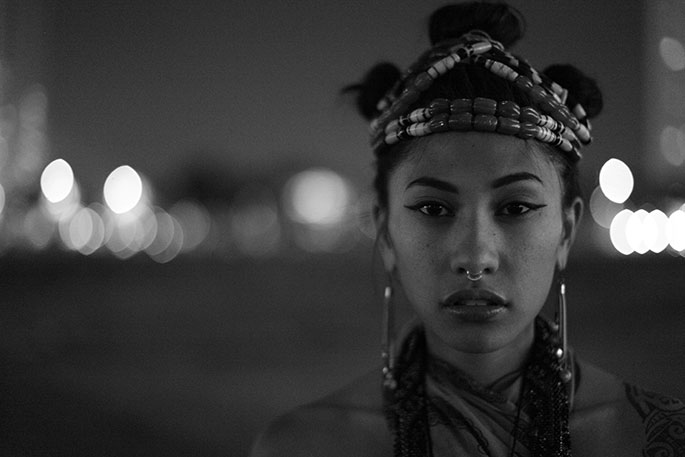 Of the many names to have emerged from the beat scene boom that shook the Los Angeles underground in the late 2000s, few have managed to strike as unique a chord as Low Leaf, a female producer, singer and songwriter who combines harp, guitar and piano with electronic beats.

Born to a Filipino family and raised on the west coast of the United States, Low Leaf first appeared in 2011 producing and self-releasing a string of mini albums over the following years. I was first put onto her by LV and Joshua Idehen, who had recommended her debut, Chrysalis. Since then she’s continued to hone her combination of organic and digital, collaborating with the likes of King Britt, Mark de Clive-Lowe and rapper Zeroh.

This month sees the release of her first label album, AKASHAALAY, via Fresh Selects, an album inspired by and dedicated to her motherland of The Phillipines. Short, at 10 tracks and just over 30 minutes long, the album is a brilliant fusion of folk and modern traditions that brings to mind soul, blues and hip hop. It’s a perfect summer listen as well as her most striking display of compositional skills yet.

She recently returned from a month-long trip and tour of The Phillipines, where she played the Masimbo festival alongside Roy Ayers, Lonnie Liston Smith and Robert Glasper, and so I shot her some questions over email to discuss the making of the album and her unique place in the Los Angeles underground.

Alongside the words, we’ve also got the premiere of the album track ‘Slaveless Master’, which you can hear below.

What was the impetus for this album being a ‘spiritual tribute’ to your homeland of The Phillipines?

In 2012, I saw and experienced spirits while visiting a very mystical part of a forest in the Philippines with a few friends and I was never quite the same afterwards. I think it was the healing energy I felt on that holy mountain that activated the deepest part of my roots, and lent me inspiration and guidance.

What did you draw from to write the music?

I typically have my own creation rituals, daily meditations, and prayers that go into the music making process. For AKASHAALAY there was a focus on unearthing my heritage. Every time I visit the motherland I still feel how there are decades of colonization that have left dark wounds upon the Filipino conscoiusness, which I could relate to since I grew up in America. There were never any Filipinos in mainstream media for me to identify with. So instead, I identified with music itself. I would often wonder about how the stories of my ancestors are energetically intertwined with mine, as there are so many unheard songs. So in a big way when I made a lot of these songs I was very much asking god to use me as a vessel.

How was your recent trip to The Phillipines and how were the shows you performed with a band?

The shows were unforgettable and transformative. Playing with a band was a dream come true because I’ve always written compositions envisioning a band with me. I’d say the most memorable show was at the Malasimbo music and arts festival. We had only played all together for the first time 2 days before the show and crammed a bunch of new songs in overnight. After an intense journey of bus, boat and jeepney rides to arrive at the womb of these beautiful mountains it was showtime that same night. I was so exhausted but once the music began, we were all one, the trees were breathing, the stage was electric and we extended our hearts into the cosmos.

‘As One’ is a stand out track for me on the album, it feels like a modern blues song and it’s also perfect as a sort of sunny, summer track. Could you discuss a little bit more of the writing process for this specific song?

Sometimes people get so invested and involved in their personal drama, in matters of the world, that they don’t realize that they are disconnected from their own peace, their own nature. I just wanted people to remember that most of that stuff is such a distraction, and whatever they are looking for ‘out there’ is within and has always been there. Once you awaken to it, you’ll feel it throughout all creation.

What would be a stand out song for you on the album, from a personal point of view?

‘Slaveless Master’ is probably the most vulnerable and honest song on the album.

I first discovered you with the Chrysalis album a few years back, and arguably one of the more striking elements of your work was the integration of the harp with modern production techniques and styles. I’m assuming you’ve got some classical training in the harp and other instruments and that the computer and modern production came later, if so how was the process of integrating those skills? How long did it take you to get to a place you felt was both comfortable and also worthy of showcasing to the public?

Piano is the only instrument I had classical training in. Harp, guitar, and beat making were self taught. Because I’ve always had different instruments in rotation, I always felt like I wanted to unify all those different voices in me. It’s been a challenge trying to merge organics with machines, but envisioning that sound intruiged me so much in the beginning so I just kept going.

I began performing as Low Leaf at the end of 2011, and I really struggled with incorporating the electronic aspects with the harp in a live situation for a long time. Most all my friends who were making beats had SPs and only used machines, so I felt out of place in a huge way. It wasn’t until this year that I became comfortable and confident in what I was doing for real.

Continuing from the above, how do you go about taking what you write in the studio onto the stage, whether on your own or with a band?

When I play with a band, I write out the chords and music for the instrumental players, and we just jam it out and come up with our own interpretation of the songs. When I play solo these days I’ll play live keys, harp, sing, trigger instrumentals, make loops and kinda just weave in and out of whatever I feel. It all depends on the moment.

There’s a lot of so-called live electronic music today. Some of it, like yours, manages to blend instruments and electronics in a continuation of the experimentation that’s been taking place for more than two decades now, while other is arguably less live and more of what I call modern dubbing, taking finished songs and performing them in the tradition of Jamaican dubbing (echoing, cutting channels in/out, effecting etc…). The latter has also become somewhat of a staple in the L.A scene that you’re loosely affiliated with. So I’m wondering how much of what surrounds you in L.A, the explosion of the beats scene and that particular live approach, has affected your own approach to playing live?

It caused me great anxiety in the beginning because I thought I was supposed to perform my beats in ‘that way’. I thought that’s what everyone wanted to see because that’s what they responded to. At the same time I would get so inspired seeing my friends truly express themselves in a way that was organic for them so I think living in LA has really influenced me to use the machines in a natural way just as I would my instruments.

What were the lessons you learnt from doing things on your own and are there any you feel can be taken forward when working with a label entity?

A huge lesson I’ve learned in being DIY for almost 4 years is that I can’t do everything myself! As my career is growing, I’ve found that I truly need help in a lot of the business aspects of the music industry. I trust in my organic foundation that’s grown on its own, and I also believe in the lane I’m carving for myself. So long as the art remains true, I think I’ll keep saying yes if other people believe in what I’m doing and want to work together.

AKASHAALAY is released via Fresh Selects on April 29 in digital and limited edition cassette formats.