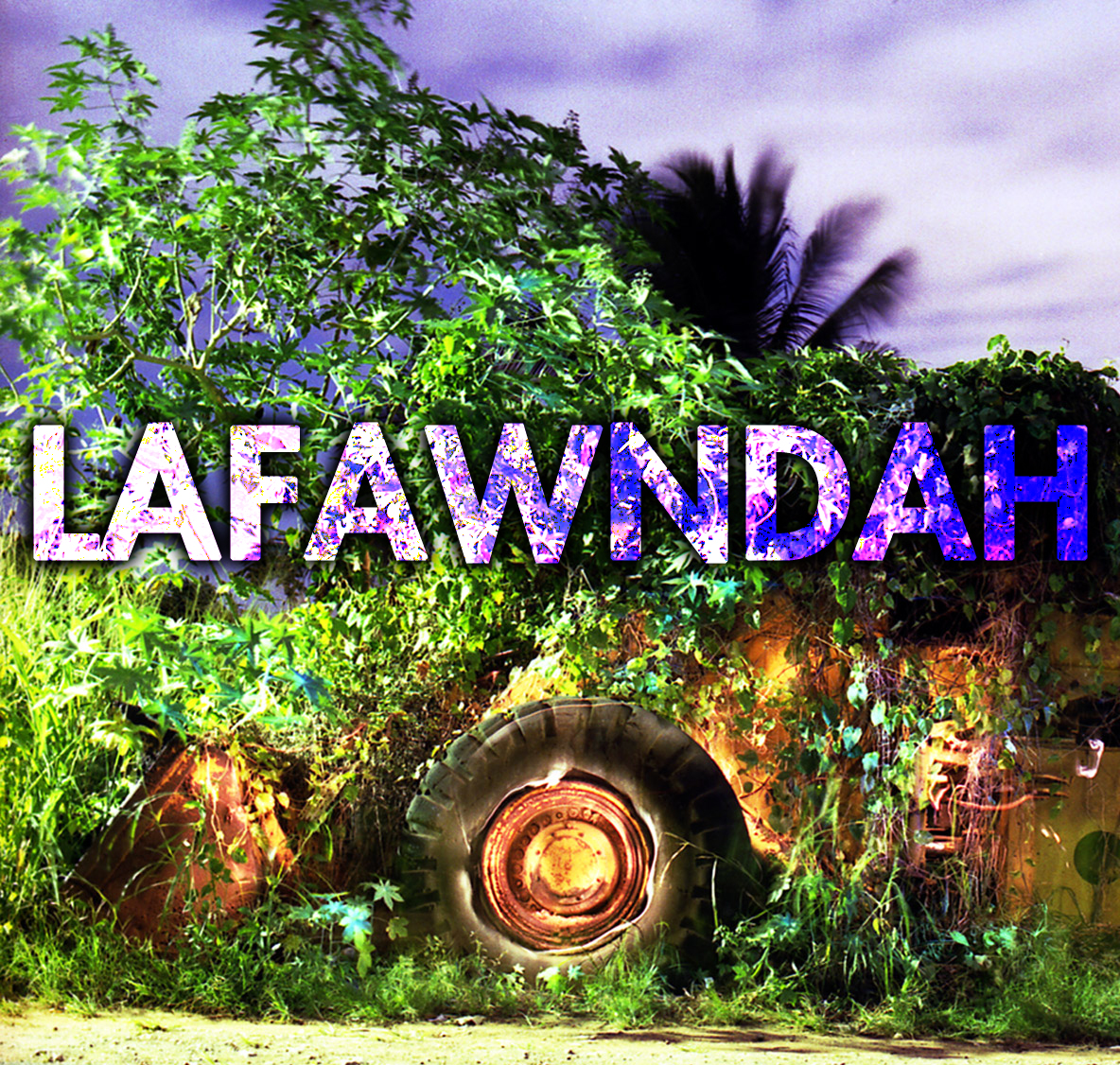 The mononymous newcomer shares globetrotting dance-pop on her self-titled EP.

How’s this for a 21st century globalization story? A Paris-raised singer with Egyptian, Iranian and English heritage connects with a Porto-based producer and records an EP in the Guadeloupe studio of a noted zouk producer. The result is LAFAWNDAH, the self-titled debut EP by a singer who performs under that alias.

Co-produced by LAFAWNDAH and Garagembanda, the EP was overseen by Jean Claude Bichara during a month-long lock-in at his studio, and the four-track effort oozes sensuality over visceral tropical grooves. We spoke with LAFAWNDAH about her art world background, her musical growth, and her nude-bathing (!) approach to songwriting. Plus, we’re proud to premiere the EP before its May 6 release; stream it below.

Tell me a little about your background. 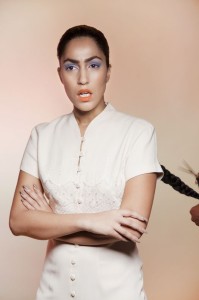 I was born in Paris and grew up there, except for the five years that I lived in Tehran with my mom as a kid. I moved to New York right after finishing my studies, and I never considered staying in Paris — it was never an option. The first thing I did was buy a plane ticket for New York. I’ve been having a relationship with New York for seven years, on and off; I also spent time in Mexico.

Before LAFAWNDAH, you had another life in the art world, right?

I studied art history in Paris and when I moved to New York I worked in a gallery called The Project, which has since closed. It was started in Harlem by Christian Haye, an important black-gay gallerist in the art world, and we were representing mostly black and Latino artists. I was also an associate director at a gallery in Mexico, and I was curating shows and writing.

It made me deeply unhappy, which is why I stopped. I’m definitely not going back to that, no matter what happens. The way I was involved in it, even with two amazing galleries that were very politically and socially evolved… I was in an environment that should have been ideal, but being involved in that way took me away from what I initially liked in contemporary art. At one point, I had the realization that I had to do my own thing.

“It’s hot and sexy, and you can fuck around with sounds that aren’t necessarily sexy or easy or soothing.”

Was there musical performance in your background before LAFAWNDAH?

The EP was done in autumn when I had been performing under this project for a year before that. I didn’t have a track produced by myself: I would just curate these weird mixtapes where I was mixing songs from the 80s up until now, just singing over tracks. The exercise was to not touch the tracks. I was in a girl band in Mexico City for about eight months before that, but that’s about it.

How does the EP relate to your mixtapes?

The EP is definitely the tracks of my dreams that I didn’t come across. I would pull stuff from industrial, electronic bands from 80s, usually mixed with UK dubstep, grime, stuff by Night Slugs, Fade to Mind and LuckyMe. Stuff like [Konrad Becker’s] Monoton and Zoviet France – that was the bridge between old and new stuff. There wasn’t any island life music [like on the EP]; I didn’t come across anything that I was excited by.

How did you connect with Garageembanda?

She’s been a friend for maybe six years. She’s a writer and massage magician; she wasn’t making music until very recently. When I started LAFAWNDAH, she started fucking around with Garageband and making really weird tracks that I was really in to. She would send me tracks and I would sing over her productions. It was special because it didn’t sound like anything else, but it was also clumsy, because they were her first tracks, but nothing really sounded like a proper song, so we never got it together.

Then she went to Jean Claude Bichara’s house in Guadeloupe for a month, and she spent a week in the studio on ‘Jungle Exit’. He was basically the executive producer, helping her put it together and working on the structure; it became her first actual song. She brought it to me and I found immediately something to sing. ‘Jungle Exit’ is the song that made us go down to Guadeloupe together.

Paradise? Pretty much. But the thing is I learned a lot about Guadeloupe after the fact: the reality is that we were did a very serious lock-up. It was my first time doing that, being locked in a house with two other people with barely any contact with other people. We didn’t go out, we didn’t explore. What we were really informed by was the actual site where we were staying. It was an amazing house on a cliff facing the Caribbean; every morning was a mind-blowing experience to wake up there. We were greeted by a family of iguanas every day.

What is it about “island life music” that attracts you?

The bounce: it allows the body to move smoothly. It is very specific to that music and it allows me to express my other fantasies, mixing weird beats and harsh, industrial sounds. I like the idea of having this thing that your body can’t resist. It’s a universal body language to me. It’s really hard to resist that bounce, it’s very fascist in that way [laughs]. Once you have people in this charming thing, you can just put your weird stuff inside that and it will be digestible, and I really like that idea. And it’s hot and sexy, and you can fuck around with sounds that aren’t necessarily sexy or easy or soothing.

“Every time we had to write lyrics we would get naked in the pool for an entire day, let ourselves float and just shoot ideas.”

That definitely describes ‘Butter’: a sexy track that is about skin, sweat and bones breaking. How did that come about?

I was singing on top of a Massacooramaan track. The lyrics were absolutely S&M, but very physical: describing what that relationship could do to your body. I wasn’t really satisfied by the lyrics but I wanted to have a song like that.

Working with Garagembanda, it was so perfect because she knows the human body so perfectly because of her massage practice, so it was fun to go really deep into body parts [laughs]. It was my first time writing lyrics with someone, because usually it’s very personal for me, but it went very naturally. We started producing together and it was natural for her to work with the lyrics, too.

We had a technique we called “brain pooling.” Every time we had to write lyrics we would get naked in the pool for an entire day, let ourselves float and just shoot ideas; the body was almost completely non-existence and the brains were, like, coming out of the water and shooting ideas at each other [laughs]. It was a really fun experience.

What do you think of the “global bass” phenomenon — basically non-indigenous people making zouk, kizomba or whatever?

I guess that’s what I’m doing too [laughs]. I’m really into the idea of everyone making world music. We have access to things that are outside of our histories, we don’t have to be following the history of the U.S.; we don’t really belong to a specific culture, we have access to everything. I’m really interested in de-contextualized beats and sounds. That’s my favorite way to produce a track: you take something that doesn’t belong to you, you haven’t digested it, it’s something you superficially bring into your own cultural music. I love the mix that it makes, it’s alien music.

I’m not really informed about what music is being made. I listen to a lot of world music, I can’t even name stuff… I’ll listen to an album of a woman chanting that was recorded in the Sahara in 1975 obsessively for a month. It’s new for me to hear what’s being made; I’m not used to having stuff dictated to me. I don’t really care about being contemporary — I care about making stuff that I haven’t heard before.

I don’t have much knowledge about “movements” — I’m learning about things like zouk bass after making the EP. Mexico was a really a big change for me, musically, because I got to discover Latin music I didn’t really know about — salsa and cumbia — plus a lot of dancehall. I was experiencing it physically in my everyday life, it wasn’t a trend thing. In my case, it was a physical experience.