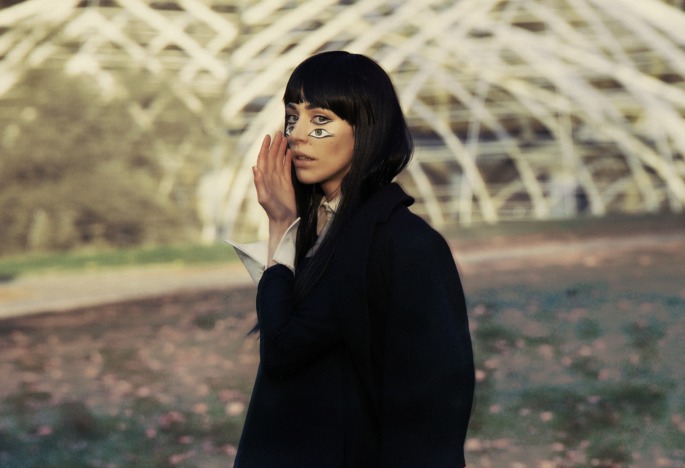 As the frontwoman of Brooklyn’s slickest pop duo Chairlift, Caroline Polachek has become a familiar face on the US indie circuit since scoring a surprise hit with 2008’s ‘Bruises’, courtesy of an iPod Nano commercial.

The object of a thousand Tumblr-based girl crushes, she’s since released two lauded albums with Chairlift and lent her breathy, octave-leaping vocals to songs by numerous kindred acts like Dev Hynes, Washed Out and Telepathe. Last year, to her surprise, she discovered that a song she’d written had been made the daring centrepiece of Beyoncé’s fifth album, a moment she describes with a wobble in her voice as “one of the highlights of my life”.

Actually, I’ve been fairly agnostic about Chairlift so far – filed away in a hazy part of my brain alongside contemporary Brooklynites (and labelmates) like Twin Shadow and Class Actress, they always seemed like a band that didn’t need my fandom, just like the popular kids at school don’t need any more friends.

But on her new solo album as Ramona Lisa, released this week on Grizzly Bear bassist Chris Taylor’s Terrible Records (and Pannonica in the UK), Polachek has swapped the groove-based, R&B-inflected synthpop of her main outfit for a digital fantasia she dubs “pastoral electronic” – an oddly flattened assemblage of MIDI sounds (chimes, horns, wonky organs and squelched drums) and her own increasingly idiosyncratic voice, sung “right into the little pinpoint hole in the back left corner of the laptop, holding it up like a book.” It’s surreal, and immediately seductive.

“Arcadia had to be this world that felt very digital and two-dimensional, yet pastoral”

Recorded solely on a laptop, Arcadia came to life during dead time on tour with Chairlift – in hotel closets, airport gates and empty dressing rooms – and at Rome’s Villa Medici as part of an artist’s residence. With no fingerprints but hers on it, the album is an oblique map of Polachek’s interior world, by turns breezily melodic and softly meditative, with just the right dose of the downright weird (see, for instance, ‘Lady’s Got Gills’, about a lovelorn friend trying to cope with the fishy title character’s “unexplained trips to the harbour”).

“When I approach Chairlift music with Patrick [Wimberly, multi-instrumentalist and producer], we think in terms of groove and a sort of playful pop sensibility,” she explains to me over the phone from Brooklyn.

“But for Ramona Lisa, instead of being a social process it was incredibly personal and introverted. The entire making of record happened on the laptop in a very two-dimensional way. It didn’t even feel like part of the real world to me when I was making it – no one really knew what I was working on, and in many ways it didn’t really seem real, it seemed like this dream world I kept going into on my own. It was like a home away from home for me while I was touring, like a video game I would play all the time by myself.”

Recalling John Cale’s arch playfulness or the studio-led pop experiments of Kate Bush, Arcadia has a retro-futuristic sheen that stems from almost every instrument being programmed in MIDI, with no intrusion from the outside world other than a few samples of birds, water, the drone of a radiator and the repetitive clank of the Chairlift tourbus.

Above all, there’s her voice – broken and glitchy, girlish yet arresting, particularly in her upper range. At times it’s almost uncanny, so I assumed she’d used various digital effects to create those wobbly, apparently Auto-tuned affectations (particularly on the title track and ‘Dominic’).

“Actually,” she explains, “the Auto-tuned glitch thing is a way of singing that I developed slowly over the past couple years, just using glottal slips. It’s a technique that you see a lot in Celtic-style singing or even Eastern European singing, but I just learned it on tour while bored in the tour bus.” Fans have commented on the Auto-tune effect, she laughs, “but if you look at it the notes are quite out of tune.”

That glitchiness is down to her lo-fi recording techniques, too: “There’s only so much clarity that you can get out of the [laptop] microphone, but I really enjoyed the texture of the digital distortion – it’s almost like having a phone call with someone on the other side of the planet. So I kind of sacrificed some clarity for the sake of that texture.” 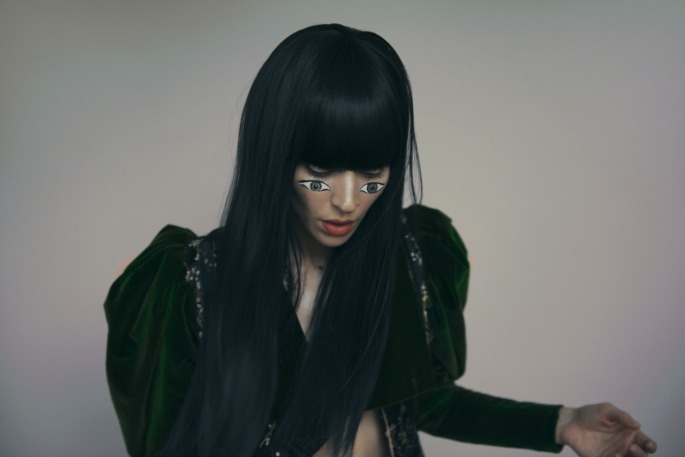 The album’s cover art pictures Polachek in character as Ramona Lisa, with a second pair of eyes painted on her cheeks as she cavorts in front of pastel-bricked castle that she and photographer Tim Barber discovered in the Hudson River Valley. “So many photos from that day came out beautifully, but that one felt right because it looks as though I’m about to either fall over or get lifted up, and I think a lot of the music has that feeling too, like at any moment it could flop over or levitate,” she says.

One song that didn’t make it onto Arcadia was ‘No Angel’, the breathy slow jam that’s since been upcycled by Beyoncé. “Before I figured out what Arcadia was going to be, I was just messing around and writing whatever came to me. I really enjoyed listening to ‘No Angel’ but I felt like it didn’t fit on the Arcadia record – it felt too current, too R&B, so I put it aside,” she says.

“Then when Chairlift were asked to write some songs for Beyoncé, Patrick and I wrote three or four R&B tunes that I really liked and that I thought were much better than ‘No Angel’. We submitted those to her and at the last minute I wrote some lyrics for ‘No Angel’ that I felt were where Beyoncé was at in her life right now, and sent it in. Of course we didn’t hear anything back for a while, and the next thing I know they’re asking me for stems, and then the record comes out without any warning at all – turns out it was on there and she’d sang it.

“When I talked to her later, I thanked her – actually it’s very hard to not cry! – I thanked her so much for taking a chance on a smaller, more left-of-centre writer, and she goes, ‘Oh please, I wasn’t taking any chances – that shit was hot. And besides, the most gangster beat on the whole record was produced by a woman!’ So that was probably like one of those highlights of my life,” she laughs.

The song as it is on Beyoncé’s album remains almost identical to the track Polachek had produced. “They used every single thing I gave them, which actually blew my mind,” she says, “but they supplemented it – they brought Boots in, who’s a great producer and did a lot of work on the album, and he added a couple percussion elements and a big sub, which of course any Beyoncé track needs.”

Beyoncé’s vocal is particularly daring; a hoarse flutter right at the top of her register. It must have been a proud moment to hear a pop superstar taking a risk with something she’d written?

“Definitely. She has such an incredibly flexible voice, she can really nail anything, but part of the composition of that song does make the vocal very vulnerable – the first note of the song comes in so high, and then it drops down for the first chorus and shoots back up an octave for the second chorus. She definitely killed it.”

Now that she’s delivered her secret project to the world, Polachek plans to follow up her early gigs – performed incognito under make-up, wig and head-to-toe costume – with a series of official dates this summer, which she says will be “fully choreographed” with two dancers.

Meanwhile, her a cappella singing troupe Girl Crisis (which features Class Actress’s Elizabeth Harper, Au Revoir Simone’s Erika Spring and Annie Hart, and more), has one final video performance in the works as well as plans to release the sheet music for all their arrangements, while the third Chairlift album is almost finished too, with Polachek and Wimberly now “writing in a very different way.”

“The more interesting ones on this record are actually not even song-based but more groove-based, and the vocals are more liquid and wild than anything I’ve done with Chairlift before,” she says, adding that she’s been studying opera as a reaction to the “very light” singing on Arcadia: “Now I’m interested in using more of my body and having the biggest sound I can get.”