“The noise scene is somehow more of a white bro circle jerk than dance music”: SPF666 goes from crust punk to Club Chemtrail 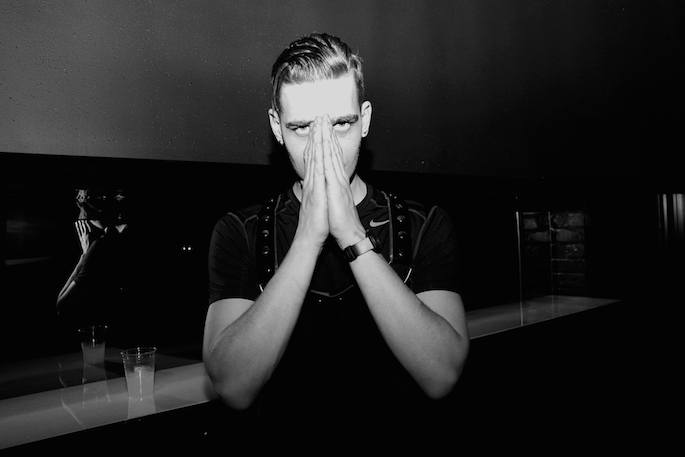 Dispatches from the Portland underground.

As SPF666, Zak DesFleurs is an integral part of the Portland club scene, hosting Club Chemtrail with compatriots Massacooramaan and Commune. Following the lead of like-minded crews like Night Slugs and Fade To Mind, the party is launching a label.

Inaugurating the label is SPF666’s debut release, Scorpion Cache (we premiered the vicious title track) an EP that fuses grime, ballroom accents and dembow rhythms with, as he describes it, “a little bit of challenging weirdness.”

We spoke with the producer via Skype about pursuing an aesthetic, the state of Portland and what’s next for Club Chemtrail Records. Scorpion Cache is available now as a name-your-price release.

It’s unseasonably nice right now; Commune and I are already splayed out on our porch drinking iced coffee like it’s summer.

Yeah, I definitely do not miss the East Coast for that reason – spring is so brutal out there.

Where were you before?

I’m from Maine, actually. But I did the eastern seaboard metropolitan fabric thing when I was younger. I got really into hitchhiking and train hopping when I was a 16-year-old crust punk, haha.

Did you do the whole punk band thing growing up?

Honestly, not really. I was more political and involved in the radical text/theory scene. I did have a little stint trying to make noise music, but the noise scene is somehow more of a white bro circle jerk than dance music. Hard to believe, I know.

Yeah, when you’re already comfortable making music and performing for a bunch of nerds who do exactly what you do, you’ve got a good start in dance music.

So what was your introduction to dance music?

I had the common experience of my peer group of getting some exposure through the boom of the late 90s early 2000s. For me, it’s always been about seeking a very particular vibe, that pursuit of wildness. To me, in music, parties, and aesthetics, I try to invoke something that’s slightly familiar and fun (like a party) but heavily tinge it with a little bit of challenging weirdness.

“It pushes you to a place you didn’t even know you wanted to go and it’s the best place you’ve ever been.”

Because that’s really what brings something out in people. It’s not hearing a tune you already like, singing along and getting hype. It’’s that weird track that kind of throws you off at first, and then you meet the really weird rhythm, then you’re in this like total frenzy.

Yeah, it’s still something we’re working out. I really feel like good examples of it in terms of events are like GHE20GOTH1K or Mustache Mondays, or like the music of Fade to Mind and Night Slugs: it pushes you to a place you didn’t even know you wanted to go and it’s the best place you’ve ever been.

I guess I say that because I’m not really a musician; I’m not formally trained or anything and didn’t (and sort of still don’t) have a huge interest in immersing myself in music culture. I think pursuing a broader aesthetic or experience is more my aim, which makes moving between doing/producing/promoting/running the label a lot easier.

How does being in Portland affect that pursuit?

Honestly, for the mixed reviews this city gets, pretty positively. This city is the perfect mixture of ease of access — you can start any weird, ambitious project here at some tiny venue or gallery — and vested culture; there’s been a scene here for a long while and a lot of people put in time and money to clear the path for us today.

It’s a really exciting time in Portland right now because so many incredible parties are happening here, and we’re all working together and supporting each other. I guess the drawback is that I’m isolated from playing on the East Coast.

“My creative process is smoking weed, looking at weird bugs, and diving in.”

Tell me about Club Chemtrail.

Well, it started as a party, Club Chemtrail, thrown between Massacooramaan, Commune, and me in December of 2012. But as we’ve continued to throw it, we just naturally started expanding into doing things that served a larger aesthetic beyond the physical party, like the ringtones pack I curated a year ago. That, combined with our production, led Commune and me to just turn the party into a label, Club Chemtrail Records.

Any label plans you want to talk about?

The next release is gonna be Commune’s debut EP, and another round of ringtones are actually going to come through in early summer as well. I’ve been getting some amazing bootlegs and edits of the Scorpion Cache tunes, so we may have to do something with that.

Commune and I really started the label to have the medium to provide the unique context of our debut releases, but we’re realizing that we’re likely going to put out work that isn’t by just us in the very near future. I’ve been surprised at the people that have asked if they could work with us in the future, though nothing is set in stone.

The whole EP is about exploring space, dissonance, accessibility, and facilitating some interplay between them under the genre of “Chemtrail Club,” tracks with party-pleasing club structures interwoven with some challenging and higher aesthetic elements, such as syncopations borrowed from gamelan and Gagaku court music, or the Japanese concept of Ma, or negative space.

In general, my influences are Liars, Lou Harrison, Taiko drumming, aggressive ballroom (like DJ Chip Chop and Jay Karan Pendavis) and grime producers like Menta and BlackJack. My creative process is smoking weed, looking at weird bugs (like the orchid mantis or a lacewing), and diving in.