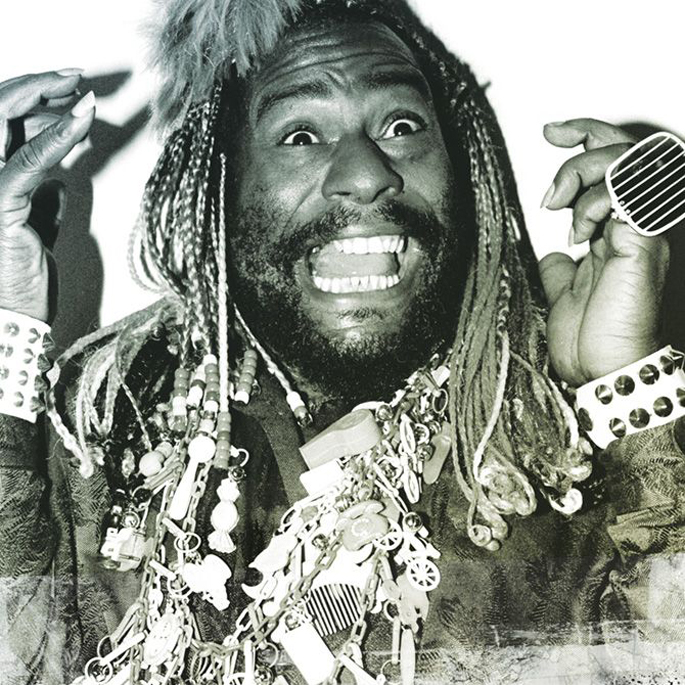 Unpicking the reality of a history crowded with giant spaceships, nappies, LSD blotters and smoke is not an easy task.

But if there’s any journalist who could look into the debauched chaos of the history of George Clinton, Parliament, Funkadelic and all the other manifestations of P-Funk, it’s Kris Needs. Never just a writer, Needs has been a lifelong and enthusiastic participator in the cultures that he loves, from founding a local Mott The Hoople fanclub as a teenager in the 1970s all the way through touring with Primal Scream and recording with Andrew Weatherall in the 1990s and beyond.

In the new book George Clinton and the Cosmic Odyssey of the P-Funk Empire, he has taken on the task with aplomb, and provided a glimpse into the twisted alien heart of a movement that existed slightly apart from everything else in the music world, yet has influenced vast quantities of both underground and mainstream that came in its wake. We caught up with him to find out how he managed it.

When did the urge to write a book about the people involved in P-Funk become a reality?

I’d been wanting to write a book about the P-Funk since 1989 when I was living in New York and interviewed George for Tom Silverman’s Dance Music Report mag. My reasoning was basically that there just wasn’t a decent history out there – but on the other hand I never thought I could ever pull off such a feat!

Then when I first met my now-girlfriend Helen, who was promoting a book on Blondie I’d done for Omnibus in 2012, she turned out to be a huge P-Funk fan, who’d actually danced onstage with them and stuff. Helen really encouraged the idea of the book and, after I had done a proposal, brought it up at their monthly meeting, and I got the nod in early 2013. She was in there every step of the way, right until the last entry and edit and now we’re together so, in effect, it’s a P-Funk love story!

“He became flattered by the fact that this weird-looking white bloke with a funny English accent was an enormous fan.”

So had you stayed in touch with Clinton after that first meeting?

Yep. We had a great time at that interview and hit it off once he’d first accepted, then become flattered by the fact that this weird-looking white bloke with a funny English accent was an enormous fan. He happily doodled all over my rare albums and ran through the whole history for me. I would see him at gigs over there in that year, and then after I’d moved back to the UK in 1990, I’d interview him or just go and hang out whenever possible. Perhaps the most intense period was when he hooked up with Primal Scream between 1993 and 94 and I was their tour DJ. Maybe my peak gig of that decade was the all-night double bill at Brixton Academy in April 1994 with the Scream and P-Funk All-Stars. We’d practically be sitting at George’s feet while he told us his stories and kept the party in orbit.

So what made you become such an “enormous fan” – what about Parliament/Funkadelic/etc had made them so important to you personally?

I first became aware of them back in the early 70s when I heard the early Funkadelic albums as they came out. Right through glam, punk and acid house – life-changingly important though all those things were to me – there was always P-Funk existing in their own anarchic space and throwing up trailblazing gems. Funkantelechy towered above most of the seismic albums released in the 77-78 era. All the gigs were amazing, particularly the Harlem Apollo in 1989: George on home turf, raising the roof like a sci-fi Messiah. And once I made contact with them, George was always hilarious, captivating and also thought-provoking company, as was Bootsy, who I first met in New York around the same time. One of the most engaging, entertaining beings on this or any other planet, and the deadliest bassist.

Did you think the book might be a slightly masochistic enterprise, given the blurred and tangled history involved?

Yes indeed. I must have been insane. That was undoubtedly the Achilles heel of the whole thing: everything is so blurred and tangled, including some of the key players. Memories and facts previously related in definitive sources proved to have been wrong or at least significantly off-beam, while smokescreens of different kinds obscured others. It was certainly the most brain-twisting project I’ve ever attempted; it made a Sun Ra history I once did seem like a picnic in comparison!

There were definitely times when I wondered exactly what I’d got myself into as, making matters even more difficult for myself, I couldn’t resist bowing to my lifelong trainspotting obsession and had decided to analyse and list the full cast for key albums. Once I’d dug myself into that hole there appeared to be untold various differing accounts and facts going around, some more different than others. Consequently, there might be the odd misplaced bass credit in what I’ve produced – but I rally hope people realise that the whole thing is done from the perspective of a long-term fan trying to explain what’s so unique and special about P-Funk and backing that up with a barrage of facts and info with the detail-obsessed fervour and passion that I inherited from my old mentor Pete Frame.

How long did it take from inception to publication?

The actual physical writing took a year from February last year, although frequently interrupted by my other writing work.

Did you actually think it genuinely was an impossible task at any point?

Almost. Almost. I never quite thought it was impossible but wish I’d had another six months to track down yet more P-Funkers and do more research. But P-Funk is like an infinite black hole when it comes to side trajectories and spinoffs. Typically, as soon as I’d finished it I heard from yet more members of the extended P-Funk family.

Halfway in, George announced he was writing his own autobiography so I started seeing this as a kind of companion work to his, a lot of which concerns his ongoing battles with the corporations and past record companies. I’ve left that area to George!

“P-Funk is like an infinite black hole when it comes to side trajectories and spinoffs.”

What were the most glorious moments of discovery for you in researching it?

Yet more music! Much of the first two chapters concern the doowop and soul which initially inspired George. Last April, by coincidence, Pete Frame gave me the 50s albums from his record collection,which included loads of great soul and doowop, which provided really nice context. Then there were the obscure productions I found out about which George did in the early 60s, like the Flaming Embers’ ‘Hey Baby (What’cha Got Good For Daddy)?’, which is an absolute smouldering soul sex-beast!

There were also more later spinoffs to pursue, but perhaps the single biggest find was Tawl Ross’ sole album from the early 90s – Detrimental Vasolene – Giant Shirley. He’s the guy who took a trip too far in ’71 and it took him years to come back. The album’s is a warm, spangled masterpiece of surreal funk. The drummer on that was Jerome ‘Bigfoot’ Brailey, the man who laid down all the monster grooves on ‘Mothership Connection’ and the greatest 70s albums. I spoke to him at length and he provided many invaluable insights into the other side of the P-Funk coin, including the whole Mutiny saga of which more in the book. Lovely fellow (and I still don’t get tired of seeing the name Bigfoot in my Inbox!).

What about the saddest discoveries, or moments that made you kick yourself that you hadn’t done this years ago?

Undoubtedly the number of P-Funk giants who have sadly passed away in the last few years. I met Garry Shider at the Primal Scream gig and others around that time. He was George’s second-in-command and a lovely, crazy guy with the voice of an angel. Cordell ‘Boogie’ Mosson passed away last year while I was writing the book.

How has the project affected your view of Parliament/Funkadelic/P-funk and how you hear the records now?

Having been dunked in The Funk for the last year and privy to their inner workings hasn’t changed my basic love and respect for the music and what they achieved. I think Eddie Hazel is an even more significant guitarist than I thought he was, which is saying something but he’s definitely second only to Hendrix in the supernatural talent stakes.

I hear P-Funk in so much modern music in sampling, attitude and varying degrees of plagiarism. George is still out there doing it and now fighting for his own legacy and music which, for various reasons, is mostly snarled up in legal battles. He sells VIP meet-and-greet tickets to pay his lawyers. We saw him speaking at the IMS in May, still rattling off the anecdotes and Funk manifestos. He doesn’t have to try and do a Nile Rodgers and capture the EDM market with such a catalogue behind him. He laid the first bricks. As with much architecture, those original buildings are the most solid while what’s gone up over them is often pre-fabricated and not going to survive as long.