David Thomas Broughton: inside the mind of the UK’s most unpredictable live musician 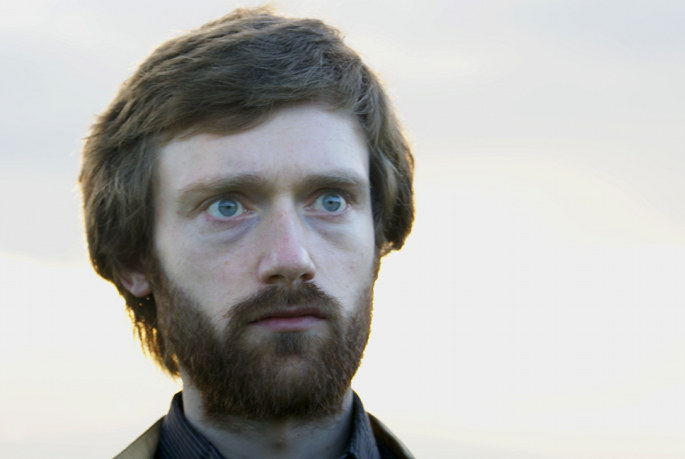 Muffling a rape alarm on his chest, David Thomas Broughton approaches my table during his show at London’s Vortex Jazz Club, a sweet guitar riff looping over and over from his machinery back on the stage.

“My body lies in an unmarked grave, my heart remains with the one I love,” he sings in his maudlin Yorkshire baritone, vainly trying to light one of his own promotional flyers by the candle in front of me. “She’s awaiting my return, although I know that will never come,” he burrs over the blaring alarm, making his way to an adjacent table to ruffle some more feathers.

For over a decade Broughton has been playing intimate shows combing performance art with looping guitar riffs and bitter-sweet balladry, sometimes alone, sometimes  joined by one of the folk ensembles he has worked with on his half dozen recordings. He builds songs about mourning or violence or being too skint to buy a pasty from Greggs bakery, before half-impulsively killing them off to retie his shoe laces, take a long draft of water or switch to a new tune. At times he comes off as comic, at other times absurd. His deconstructionist performances emphasise hesitation and self-awareness, building up a kind of maddening impotence onstage, which he uses as a secret strength as he switches it off to play something soaring beautiful.

Microphones pick up guitar riffs, vocals or snatches of ambience – a cough, a thud, a shattering wine glass – and peddles loop them over, to the point of cacophony, allowing him to play the idiot or savant on the stage or amongst the crowd. One time I saw him end a set standing on a stool doing a R&B cover of ‘Dynamite’ by Cliff Richard & The Shadows with beat-box loops, cutting off to sprint screaming out the front door of the venue. Another time it was something completely different.

Trailer for a documentary, The Ambiguity of David Thomas Broughton, currently appealing for crowd-sourced financing.

“I’ve always felt that people can write a song, practice it perfectly, recreate it every time,” he explains over coffee and marmalade toast a week after the Vortex gig. He sits relaxed about his fast approaching departure by train to Scotland to continue a tour for Sliding the Same Way, his album released this September and recorded with the Juice Vocal Ensemble. “But I don’t understand how that’s going to maintain their interest as a performer if they have to go through the same thing over and over again,” he says.  “I’ve also found that audiences respond quite nicely to not knowing what’s going to happen.”

“A friend of mine said it’s like one person who desperately wants to make beautiful songs and another person desperately trying to stop that person – I think he’s probably right.”

“I like the idea that people are forced to confront awkwardness,” he adds.

Broughton says that the awkwardness of his performances is a hangover from his teenage years – it was this that got him interested in being a solo act. “It started by not wanting to work with other people. I had an awful band experience in sixth form,” he says, jokingly. “Everyone fell out because we all liked different music. I was into Britpop like Suede, Elastica, Sleeper, Echobelly but there was a bass player into punk there was a metal drummer and a Paul McCartney-wannabe guitarist-songwriter.”

“I searched on the internet, ‘how do you make a band with one person?’ and found loop pedals. It started off that I was piling lots of noises into this thing to make improvised kind of soundscapes. Then I started writing songs and I put them together.”

Stand out tracks from the new album, which is more overtly folk and rooted in England’s North than anything he has ever done, include ‘Unshaven Boozer’, tracing the plight of an unemployed former miner (“Although I’m an unshaven boozer, I do all my drinking in town. I know I have strong arms and fists like boulders, but I’ll do nothing but use them to hold you”), and ‘Yorkshire Fog’, a naturalist take on war and family (“My mother’s breast my father’s hand, brought me up to be a man. I’m sodden from the dew. I ponder rose and honeysuckle, clench my fist and bite my knuckle. I crouch in anticipation, fight for my mother’s nation. I’m sodden from the dew”). ‘The Promise’ contains one his best delivered deadpan lines to date: “I will glass every one of you pricks in this bar. It may not be the promise I intended.”

Now, David Thomas Broughton lives in Seoul, by way of Pyongyang, London Manchester and Leeds. His girlfriend works for the British Foreign Office and he stayed with her for three years in North Korea. Now he lives in the South.  In the UK he worked in the complaints department of Transport for London Busses, in North Korea he worked for a UN development programme and in South Korea he works with “an organisation conserving habitats of migratory water birds”.

“It would be nice to not have to work for a living,” he says. “But I’m content with just having the opportunity just doing what I do now. I’ve done big shows on big stages at festivals but it becomes a different kind of performance because you can’t have much audience interaction. If it pays enough, I’d be happy playing Vortex-sized shows for the rest of my life.”

As he’s collecting his gear for his journey, I ask him about the more sorrowful side of his music; namely ‘River Lay’ and ‘Onwards we Trudge’.

“Many of the ambiguous lyrics are often interpreted as darker than they really are,” he says. Broughton recalls North Korea where “the one thought every day is ‘How is my family going to survive this day?’”

“In the West people worry about such small insignificant things and have these ideals of how life should be but their overarching happiness is probably there – people have just added too many unnecessary expectations to realise what they actually have.”

David Thomas Broughton is on tour again in September.