An Aphex Twin blimp is flying over London 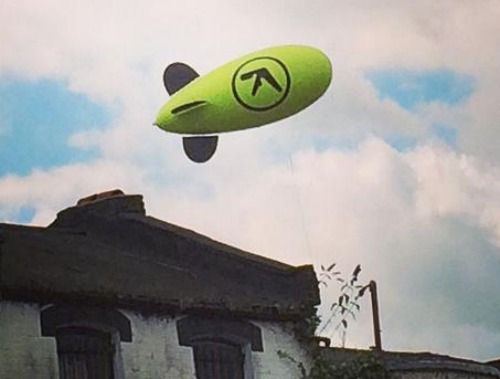 But what does it mean?

We can only hope that the sight of an Aphex Twin-branded blimp flying high over east London’s Oval Space venue today, emblazoned with “2014”, means that Richard D. James is about to make his long-awaited return.

The timing is interesting, given the release of his “lost” Caustic Window album only a few months back through an innovative Kickstarter campaign. A new record from the Cornish genius would mark his first full-length since 2001’s Drukqs.

Has the FACT April Fool worked its magic again? First Burial, then Boards of Canada – we seem to have a knack for this. In the meantime, discover the facts and fiction of Aphex Twin’s mythology and delve into his 50 greatest tracks.

Update: The Aphex Twin logo was spotted outside of Radio City Music Hall in New York yesterday – scroll down to see it.

Update 2: We now have the date 10.19.2014, which Twitter user Robbie Martin claims to have spotted at Rushup Edge in Derbyshire (though as pointed out by several people, this looks to be a hoax based on the previous stencil). Rushup Edge, as superfans will know, is an album by The Tuss that’s believed to be the handiwork of that sneaky Aphex Twin.

Another stencil has also been found in New York City at 14th Street and 8th Avenue – scroll down to see those.

Just spoke to the guy at the Aphex Twin blimp, he was super shady and wouldn’t tell me anything, but said “it’s gonna be good”

The jokes are now rolling in…

hipsters marvelled at the Aphex Twin blimp until it began to reign terror down upon Hackney pic.twitter.com/RY65CcDHYZ