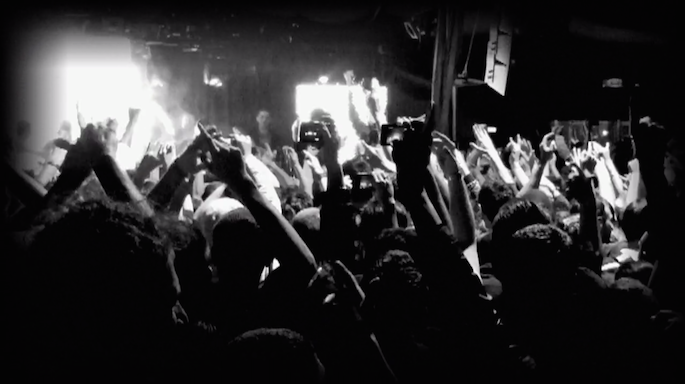 Don’t call it a comeback.

Techno of all flavours is, of course, everywhere now – and maybe it feels like there’s a creative revival of some kind because suddenly indie-alternative or fashion folk are (re)discovering it and trumpeting it like they’ve discovered a free energy device or something. Talk to anyone in the thick of things, though, and they’ll tell you it never went anywhere. Funnily enough, in fact, for a sound and scene that were built on visions of the future, techno is particularly immune to passing time.

In a very similar way to how Terry Farley and his like-minded DJs, promoters and clubbers maintained true-school house music through a period of relative unpopularity – with faith in the sound not as a museum piece but as a fully-functioning, fully-relevant cultural apparatus – so a hardcore maintained techno as a vivid, living club experience, and are now being vindicated as the rest of the world catches on again. Amélie Ravalec’s film Paris/Berlin is a fantastic view of that hardcore, a tour through the techno factories to find out what has made it so resilient and consistently relevant over all these years.

I’ll be presenting a rare London showing of the film next week, so partly as homework – and partly just because it’s interesting – I caught up with Amélie to find out about her motives for making Paris/Berlin.

Techno constantly evolves and changes its place in the cultural landscape. Currently, it’s more popular than it has been for 10+ years, so what do you feel its place is now?

Techno and its darker, more industrial side have definitely risen in popularity over the last few years with clubs like Berghain in the top ten tourist attractions. It attracted a wider crowd and as a result a lot more people are producing this kind of ‘industrial techno’ now. The situation in Paris for example changed a lot even since I released the film. There are now several proper techno gigs on every weekend, and quite a few new venues too.

Are you as in love with current sounds as you were when you first got into it?

I still love techno and I’m always very excited to discover new artists to release on my label, Fondation Sonore. I never, ever get bored of my old records, though to be honest I haven’t bought much new techno over the last two years. I used to buy techno records every chance I had while I was making the film. Unfortunately I don’t have as much time to go out and dig for techno as I used to, as I’ve been working on a new documentary on a completely different subject for the last two years, and have a lot of work on the side too.

“There weren’t many tourists, it was mostly just older gay guys, and everyone was really into the music. It was perfect.”

Techno is about the club of course – what has been your defining dancefloor moment?

My first time at Berghain was pretty incredible. I was 16 or 17, I had been reading about Berghain for months, dying to go in there… and I wasn’t disappointed. I went in on a Sunday morning, Ben Klock was playing this amazing set, old acid stuff with some pretty dark tunes, it was harder than I ever saw him play. There weren’t many tourists at that time of the day too, it was mostly just older gay guys, and everyone was really into the music; it was perfect. Everything was raw, dark and hard, I loved it.

Who are your personal top 3 musicians/DJs?

Adam X, Ancient Methods & Kareem have been my top 3 for years. I discovered Ancient Methods with their second release and went to London to see them play a few weeks after. I was blown away by their live set: it was the techno I always wanted to hear, hard but slow; gritty, mechanical and very industrial. I was buying a lot of old records at that time and soon after I discovered Zhark, Kareem’s label. It was incredible, every release on it was perfect. Similar to Ancient Methods but even harder, I can spend hours listening to it, it really clears my brain. And last but definitely not least, Adam X. His music has the perfect dark energy. I co-host Fondation Sonore events in Belgium and have booked Adam several times, he always plays the hardest for us which have been my favourite live and DJ sets.

What was the biggest adventure you had in making the film?

When I started I didn’t have a clue about how to make a film, so the whole process has been an adventure from the start. I had to learn everything along the way, from shooting to researching interviews, editing, dealing with the technical side of things, the administration, translating and doing subtitles, licensing music, negotiating screenings etc all on my own. It took me three years to complete the film. I did no promotion, had no distributor, yet was fortunate enough to be invited to attend screenings around the world as well as selling a few thousand DVD’s. A presentation of the film alongside a Detroit techno movie also won an audience award at Sydney Fringe Festival so I couldn’t be happier.

Who has been your favourite interviewee?

It was a lot of fun to travel around to interview everyone. I really wanted to interview Kareem but couldn’t find much info about him online, I ended up finding an old number on Discogs and I texted him to ask for an interview, I think he was pretty surprised but he agreed to meet and I interviewed him in Berlin a few days after. Was great to meet Laurent Garnier too, I went in the south of France where he was playing and it was very interesting, he’s a very down to earth guy and had lots of interesting stories to share.

“When I started I didn’t have a clue about how to make a film.”

What do you hope to tell a new generation of electronic music fans and musicians with this film?

I hope people keep their love and enthusiasm for music because that’s really the most important thing. You should really make the music you love and not compromise to fit into what’s hype this year. Of course there is always a business side to it when you’re a musician or DJ but it’s easy to get lost in it and realize after that you don’t even love techno anymore. As you mentioned earlier, industrial techno has really gotten big over the last couple of years and I can’t help to feel that it brought the quality down a little bit.

What have been the best reactions to the film so far? And the worst?

I had a lot of good feedback from people. It’s always nice especially to hear from people who didn’t know much about techno, it’s amazing to have inspired people with the documentary. It’s been two and a half years since the release and I’m still selling DVDs every week! As for the worst reaction, I was attending a screening in Italy a while back and was doing a Q&A after the film, someone asked me if I “didn’t interview guys like Richie Hawtin and Villalobos because they didn’t want to be featured?”. Obviously this person didn’t quite understand what my film was about.

I just released the soundtrack of Paris/Berlin on a double 180g gatefold LP on my label Fondation Sonore, with eight amazing industrial techno tracks from Regis, Ancient Methods, Adam X, Kareem, Oyaarss, Archae and Grovskopa, Makaton and DnA. The LP and last copies of the DVD are available on my website.

Paris/Berlin is showing at the Backroom Cinema, Peckham on September 19th, with after party at Rye Wax.