Pulling out all the stops: Why Room40’s John Chantler is taking his modular synth to church 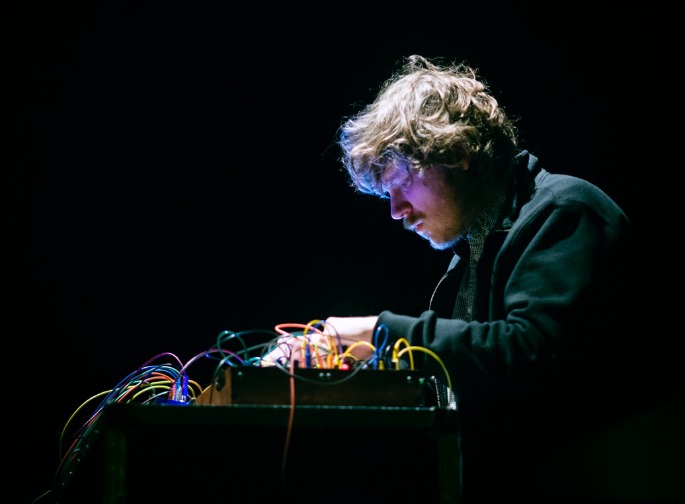 “The organ is controlled manually with levers. Right now you can see nothing is pressed down, and you can hear this clicking noise of the keys being activated, but then there’s this thing where…”

John Chantler is showing me the weird stuff that a church organ can do. Pressing down keys with his fingers, then his full palms, the pipes towering above us begin to emit a soft reedy moan that ripples through its upper range. It sounds uncannily like whale song.

We’re sitting in the balcony above the cavernous, airy space of St John-at-Hackney, where Chantler will play a set this Thursday (November 13) combining his modular synthesizer set-up with the church’s 1950s Mander organ. The imposing space has hosted some spectacular gigs in the past two years from experimental, electronic and ambient artists new and old, and the latest series (which featured Shackleton, Laraaji & Sun Araw and Rhys Chatham among others) draws to a close this week with Chantler supporting minimalism pioneer Tony Conrad and – offering a very different sonic experience – cinematic noisemonger Ben Frost.

Having never had a close look at a church organ before, I’m intrigued to find out more about the performance he has planned for the evening, so Chantler has agreed to show me what he’s been preparing on the instrument. The Australian-born artist – whose latest album for revered experimental imprint Room 40, Even Clean Hands Damage The Work, is a luxurious web of fractured electronics and majestic drones – is modest about his skills.

“I’m not an organ expert,” he clarifies. “Maybe if I was, I would know that in this or that bit I should go for these sounds – but I’m just kind of thinking of it as a kind of tone generator.” The elongated, slow-moving piece he has planned doesn’t require especially nimble fingers, however. 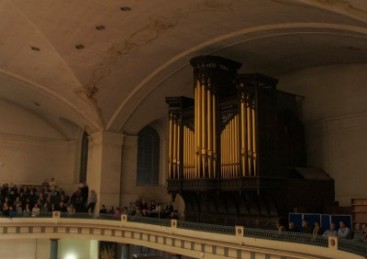 “I’m not a massive performer, I don’t have Herbie Hancock hands or anything like that, so I often do stuff like this,” he says while wedging folded squares of paper between the keys to keep them held down, which allows him to build huge, octave-spanning chords. “But there’s a point where you have too much stuff and then the motor can’t really keep up with everything” – he breathes sharply in to demonstrate the organ running out of puff – “and it starts to become quieter again, because I guess the air is too dispersed between multiple things. But if you find a sweet spot you can get the volume really going.” He demonstrates with a huge, blaring chord that sends a tremor through the floorboards.

Chantler’s unorthodox approach has helped him uncover a bunch of other sounds not usually heard in an church organ’s repertoire, including a set of weaker but intensely high-pitched tones that sound like they could be deployed to scare teenagers away from shopping centres. “There’s a clear sine wave, but there’s a bunch of noisy stuff around it, like it’s rattling something,” he ponders. “And the other thing is that these are not all perfectly in tune, so if I pull out the tuner on my phone then this one will be in A, but this one will be slightly flat, which makes it more alive.”

At the other end of the scale, the organ creates huge, rippling bass that becomes rich in harmonics as it reverberates around the vast space – but it will still need a helping hand from Chantler’s mixing desk on the night. “This sounds amazing, this is ace, but have you seen Ben Frost play live? Ben’s bass is going to be much louder than that! You can imagine that back in 1958, and before that obviously, this would have sounded like, ‘wow, God is wrapping his love us around us’, that kind of thing. But these days…”

It’s about the same volume of the traffic outside?

“Yeah. So I’m going to prepare a recording and play it back through proper subs to reinforce the bass. And when this is all going, because the room is so big, you get a Doppler effect as it traverses the room, so it does weird pitch stuff on its own and it’ll still do that even when the room is full of people.”

Chantler is preparing his organ recordings at Stockholm’s famous Elektronmusikstudion, where he produced much of his recent album. Founded in the 1960s, back when toying with synths was a hobby that appealed to scientists as much as musicians, the institution remains a mecca for electronic artists who want to make use of its world-class equipment – including the classic Buchla 200 and Serge modular synthesizer systems – and it’s open to any composer or sound artist who successfully applies for studio time.

“The monitoring, the speakers and the treatment of the rooms is amazing, really incredible, and that impacts how you work because with a small speaker at home you can’t hear any low frequency stuff like this tone,” says Chantler, playing the lowest note on the organ. “What you’ll hear is the upper harmonics, above the fundamental, but you won’t hear that actual original sound. And then you hear the fundamental [at EMS] and it’s super clean – you feel it but without it being at an oppressive volume.”

A studio assistant advised him to start small at first, giving him just one module and one patch cable and instructing him to “work with that for an hour and press record before you start”. “A big part of it is being able to listen properly,” he says. “That said, the boxes there have mojo. There’s something about the mixing and amplifying sections that sounds… it’s not exactly lo-fi, but it has this particular kind of grain that’s really appealing, a slight fuzziness that sounds super cool. So all of that together is great, and for that to be essentially a public organisation that’s available to people – I didn’t have to pay for it!”

It’s no huge surprise to hear that he’s moving to Stockholm for good in a matter of weeks, where he’ll be able to return to EMS and develop recordings from the St John Sessions show into a new album. The departure means leaving his job as programmer at Cafe Oto, the intimate London venue where he’s put on shows by exceptional fringe artists like Sun Ra Arkestra, Thurston Moore, Jandek and Dean Blunt – but it will also free up his time to continue with a major project to master and release dozens of Oto performances through a subscription service.

“So I’ll do that a day or two a week, and then I’ve got to mix this record,” he says. The plan is to run all the recordings through his synthesizer, “so that the organ is being used as a whole bank of oscillators, and then I’ll process it and do stuff with it.” Until the release of that album, the only chance you’ll get to hear the unlikely combination of modular synth and 1950s church organ is this Thursday (November 13) at St John-at-Hackney in east London. Tickets are still available here.