“I create from a place that is the belly of the beast”: Jlin unleashes her Dark Energy on footwork

When footwork burst onto the international dance music scene in the late 2000s, it was like a shock to our collective nervous system.

Birthed in the Chicago underground, the music brought an energy that many had not felt since whatever heyday they had been holding onto, and in the past five years footwork has travelled the world, from Chicago to Tokyo, London to Serbia, infecting everything in its path. Originally a music made for dancers, footwork’s rise in popularity led to an inevitable evolution that helped it fit within the accepted norms of dance music. With popularity came attention, and with attention came the need for figureheads. The late DJ Rashad was one, a unique voice that rose from the Chicago underground to lead the music, and by default its various local practitioners, around the world.

Despite all of this, one thing that’s been conspicuously lacking over the past five years are unique voices within footwork. You’d think that such a surge of interest would lead to more progression, sonically, and yet most people within the footwork world have played it safe, sticking to accepted production templates. While Rashad and his long-term partner Spinn made a lot of tracks that were classicist in their approach, they also embraced footwork’s mutation. When the music collided with jungle in the UK, both sides took inspiration from each other and pushed new ideas forward. At the same time older Chicago pioneers like RP Boo and Traxman delivered equally progressive takes on the format. But what about the younger heads?

In 2011, Planet Mu released the second of its Bangs & Works compilations. The first volume had been largely responsible for spreading the footwork gospel around the world, and its follow-up focused on Chicago and the possibilities that lay within the genre. The second track on the record, ‘Erotic Heat’, came courtesy of a then-unknown female producer called Jlin. It sounded like nothing else on there – 10-ton heavy and with none of the samples that characterise so much of the music. Four years later, Jlin is releasing her debut album on Planet Mu, Dark Energy, and footwork might have just found its new pioneer.

Ahead of the album’s release on March 26, and with promise of a live show and appearances in Europe in the next year, I called Jlin at her home in Gary to find out more.

Did you play music before making footwork tracks?

I did, but I hated it because it was structured. The beauty of being thrown into the jungle is that it forces you to use your creativity. If you’re sat down and told how to do it, once you’ve learnt that way you can have difficulty operating outside of that mode of thinking.

Finding your voice tends to be something that takes time.

Right? It’s always there. The question is, are you gonna go find it? If you don’t you might stay in a stagnant state or you eventually might stop all together. 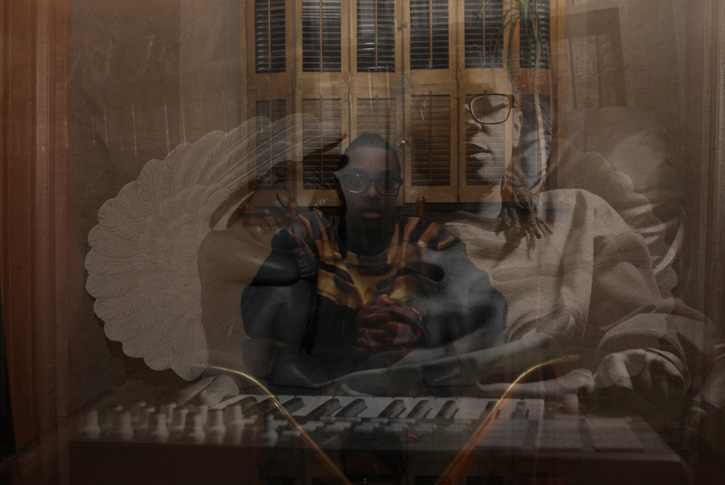 “I like sampling, but by moving away from it I can challenge myself.”

So the catalyst for you to go on that search was your mother’s question?

Yes. You listen to footwork and it’s predominantly, I would say 95% of it, sample-based. That was the right thing to do. It was the musically and politically correct thing to do inside the genre. But then somebody comes along and asks you that question, “what do you sound like?” And, well, it’s a good question.

That it came from your mom is kind of amazing.

If you listen to the radio so much over time, you’ll come to understand just how important sampling is to modern music. Sample-based music is everywhere. So perhaps she was more asking in the sense of, why don’t you be the person who changes the paradigm and does something different?

Deciding to be the artist who’ll make footwork without samples is a hell of a statement to make in a way.

Exactly. Do you know how many tracks I could make in a day if I just sat there, pulled up a sample and threw drums behind it? I can’t tell you how easy that is. It’s so easy. I’ll be honest. If I were having a roundtable discussion with people who make tracks a lot of them would get offended, because this is what they do – but I’m just being honest. They don’t explore outside of that. It’s kind of like… I try not to get into that conversation too much, but if you approach me and ask me I’ll flat out tell you. I’ll end up challenging people. I have vocal samples in my tracks, but I make all the sounds in the music. I’ve chopped samples before, it’s not that I can’t do it. To me it’s not interesting. I like sampling, but by moving away from it I can challenge myself.

It struck me that the vocal samples you do use take on the classic role of samples in footwork, interacting with the rhythm and energy of the music.

That’s exactly how it is. Sequencing those allows me to do that. I use the concept that RP Boo mentioned when somebody asked what sounds influenced him, and he replied “all sounds”. A lot of people when you ask them why they did something, they don’t have a real answer besides “oh, it sounded good”. To me that’s not even a real answer. If I did something, not only is there a reason behind what I did, there is intention. That kind of answer to me is played out.

The voices you use also have a cinematic element, which is perhaps a little lacking in some of the more obvious footwork tracks. Your music sounds more like a soundtrack to me.

It’s intended to be versatile. I don’t just record vocals for no reason. There is intent. Impact is important. Words are important. Sounds are great but when you have intent behind why you do what you do, and you know what impact is… I find that a lot of artists don’t necessarily know what impact is. They don’t pay attention to it because they’re so worried about whether it’ll sound good or will someone else like it. Why be focused on that when impact is the overall thing you’re thinking about? Don’t focus on just the one element of it.

You work at a steel mill and your music has an industrial feel. It also reminds me of the rhythmic quality of industrial work, and how such work built American society to a degree. Clocking in and out, working with machines. Is it a fair assumption that some of your music inherits such qualities?

[Pause] Not really. My job doesn’t have anything to do with what it is I do. I often get asked the question, about the job and my sound being industrial and so large, but the work doesn’t have any influence on the sound for me, not at all.

Where do you think that feeling comes from then?

How do you view your work within the context of not just how footwork is made but also its history?

My intent was never to be like, “there’s another way to do this,” but it’s ultimately what ended up happening. The music was at a traditional, polished standstill. This is what it was, this is what people expected, and I’m the one who came in and made people go “whoa, what is this?!”

What has the reception been like from dancers and others in the Chicago area?

Pretty good. Even if people didn’t like it, dancers and others, that wouldn’t stop me from doing what I do. It wouldn’t deter me. Back when I started, when I wasn’t as sure as I am now, I might have considered it. I might have stagnated. But because I know what I’m doing and what I’m supposed to do at this point, it wouldn’t phase me if someone said they weren’t feeling it. I’ve had DJs tell me they weren’t feeling my stuff but then three months later they tell me that they’ve gone back to it and they get it now. That’s happened a lot. When I let RP Boo hear the track ‘Infrared’ he wrote me the next morning and said, “this is going to go over people’s heads by a long shot.” He loved it but he knew. 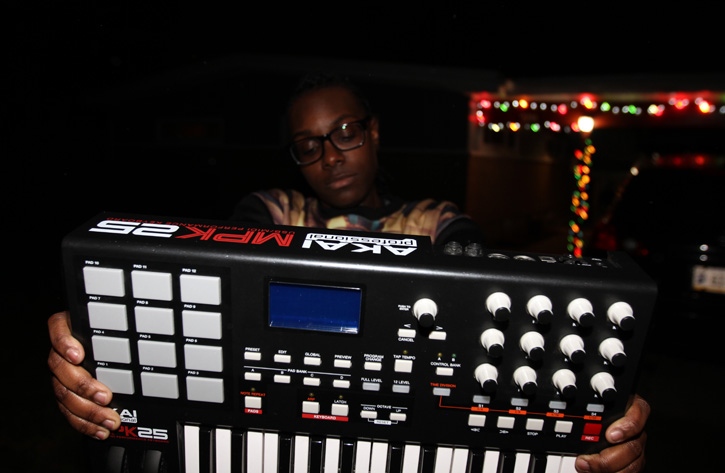 “Most people assume I’m a guy when they hear my music. When they find out I’m a girl they’re surprised.”

Do you think your distance from Chicago has played a part in you taking this different approach?

I think so. It’s a big part of it I feel. There are some people I’ll always ask for feedback, like RP Boo, DJ Roc and DJ Diamond. I trust these three the most, I’ve worked with them all before. And I don’t DJ either so I can’t test my tracks in the same way as others, but I trust that those who are supposed to hear my music will. It’ll get to the right ears at the right time. It’s like putting a message in a bottle – I’ve no idea where it’ll end up.

How much of a challenge was it putting together a body of work that could stand up as an album?

I told Mike Paradinas to really pay attention to the arrangement. I’m tired of albums that start off great but then die off, so I asked him to not let the album do that. I wanted it to keep going up, rising constantly. And he replied that most of my music is so intense it wouldn’t do that anyway. He said the music made such a statement already I didn’t need to do much.

Has it been helpful to work with someone like Mike and a label that’s on the outside of the scene, so to speak?

It’s been very helpful to me. The distance between us is something I enjoy.

How much of an effect does your position as a woman in a male-dominated field have on what you try and do?

A person delivers what they can regardless of gender. Most people assume I’m a guy when they hear my music. When they find out I’m a girl they’re surprised. That’s the most common thing I get, this shock response. I guess my music has a boldness that’s very male, but there’s still a feminine essence in there too. There’s a masculine/feminine thing going on where the two are intertwined. I’d say the feminine part of it is buried inside what I do, whereas the sound itself is bold in a masculine way. Those two things work together to make the sound I want. As far as me being a woman, it’s just something people have to accept or not.

The more women like yourself make strides, the more role models there are for younger generations.

For sure. If it can help the next one behind me, or even people in front of me realise they can do it, that’s great. If my position can help someone, more power to them. I’m always open to people asking questions. I’ve had a few women message me to say I’ve provided inspiration, and for me that’s great. The more women come out and get involved, the less it’ll become awkward and uncomfortable to talk about it.