2 Up: P Money on Money Over Everyone 2 and attacking the beat

Nearly six years have passed since P Money released Money Over Everyone.

It’s a definitive mixtape – one full of energy, power and intent – that stood out like a beacon of hope at a time of general disillusionment in 2009. He’d already made waves with his first two tapes – Coins 2 Notes in 2007 and the defiant P Money Is Power in 2008 – but it was Money Over Everyone that really justified the hype, painting the picture of an MC with ambitions way beyond the world he was operating in.

It was a mixtape defined by beats too – Maniac, Sukh Knight, Teddy (under his Silencer moniker), Scratcha DVA and even a young Royal-T being standout names that nodded to the variety of styles P chose to utilise; more than anything, tracks like ‘1Up’ and ‘Left The Room’ proved for the first time that he had the ability to turn clubs upside down. Sukh Knight in particular – a producer who’d started to incorporate grizzly, upfront dubstep within his own framework – also proved a big influence, with ‘Slang Like This’ a catalyst for P to make a serious impact on dubstep audiences over the next few years.

Releases on RAM and Circus Records, as well as a feature on Magnetic Man’s debut LP, were a testament to how quickly he was embraced by the blossoming dubstep scene in Europe, but through it all, he remained an important asset to grime. A trio of EPs for Rinse – the label he dreamt of releasing on as a boy – also checked his progress, but as he explains, 2015 felt like the right time to work on a project independently again.

The project in question, Money Over Everyone 2, is a mixtape some fans never thought possible, but one that embodies the same spirit that made the first such a raw and inspiring body of work. Self-made – from the lyrics to the design and packaging – listening to it feels like we’re back in 2009, hearing P Money make that grand statement again for the first time. The beat selection is just as colourful too – Royal-T is back on the explosive ’Shotta’ alongside legendary beat-makers like Crayzee Banditt and Rapid – and he realises another childhood dream on ‘Sounds Of The Sir’, featuring the Newham Generals. In short, this is P Money back where he belongs – in control.

Although it’ll naturally be viewed as a precursor to his forthcoming debut artist album, Money Over Everyone 2 feels like more than just a mixtape and – as he explains to us in a pub in his childhood home of New Cross – a release he considers vital to his development as an artist.

“It’s a proper journey bruv, the people who were with me then are still with me now.”
P Money

It’s been a while since you released the first Money Over Everyone – where do you see this one fitting in?

I see it as one of the leading underground releases to be honest. When I made it, I wasn’t thinking about radio or even the wider market, it was more about dealing the gritty side of grime that people don’t always cover.

I remember a couple of years ago, the focus was always on recording that one good grime single and mixtapes were seemingly forgotten about for a while. Why do you think the mixtape format has made a bit of a comeback? Why did you decide to put one together again?

I’m doing this because I feel like I’m ready to release an album and I thought it’d be a good idea to do a mixtape before I started to dedicate my time to that. Speaking to my fans too, I released that everyone loved the first one. I just tweeted “Money Over Everyone #2” one day and it went off online.

As easy as that?!

(Laughs) Yeah as easy as that! It’s important to speak to your fans to get an idea of where you’re at as an artist though. I mean, some people thought I couldn’t even do a Money Over Everyone 2, so it’s also a challenge in that sense.

Are there any parallels between this and the original Money Over Everyone tape then?

The vibe is definitely connected to the first. When people listen, they’ve been saying “ah yeah, this is like old school P” – like I was in 2009, really. The way I attack the instrumentals is definitely similar as well but it’s different too in a sense, because the beats have changed. I don’t think I had a beat like ‘My Lingo’ on the first for example, so it’s mainly the beats I’d say that have changed. New producers have come in and made an impression on me, definitely. 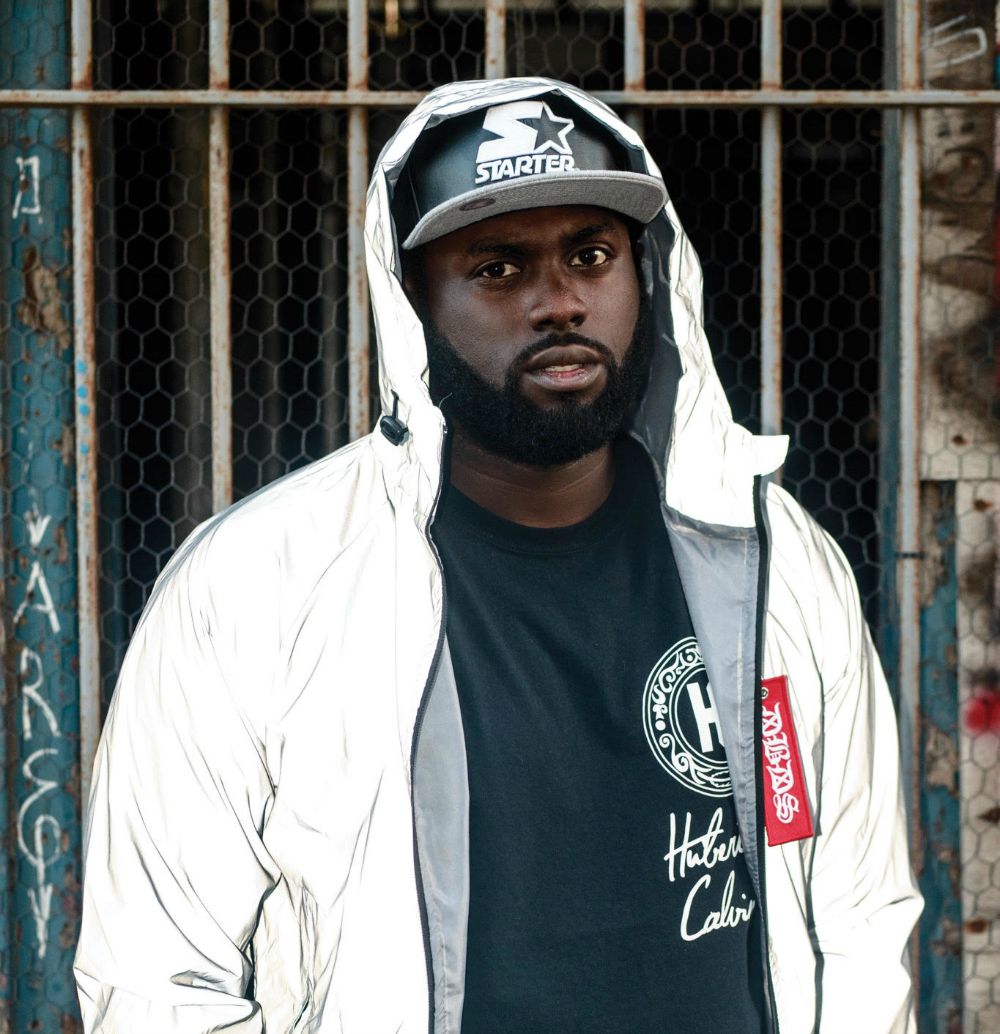 “I didn’t come out the womb all hyped up spraying bars.”

It’s good to see that Royal-T is back on this one too with ’Shotta’. ‘1UP’ is almost looked at as a classic grime record now.

Originally that’s what I wanted to do, just something for the mixtape, and when I heard that he’d be releasing it on vinyl with Butterz, I was like “yeah, sick!” There’s loads of producers like Royal that I’ve been working with for years. Like, Crayzee Banditt I’ve known for about a decade and the beat he made for the mixtape (‘Banditt Riddem’) is from 2003/4. It’s a proper journey bruv, the people who were with me then are still with me now.

Looking more generally across the track list, which three tracks on the tape do you think make the biggest statements – and why?

‘Who’s In Charge’. For me, the way the beat and the vocal is laid out – for me that’s grime. That’s the first thing I’d play for anyone who wanted to know what the whole scene was about. It’s got the energy, the catchy hook – it’s just vibes.

‘Sounds Of The Sir’ ft. Newham Generals. Just because it’s a personal favourite. From young, I always listened to the Newham Generals and it’s kind of a dream to record a tune with them to be honest. I remember being a kid making sure i’d be in on Sundays to record their sets on Rinse. i know all their bars – I mean, everyone does – but i’m happy to say it.

‘There For You’. It’s grime, but it ‘There For You’ shows a different side of it. A lot of people still feel like grime is just shouting and screaming to be honest. Like, I met a girl the other day at the airport and she told me she only started listening to grime this year, so I asked her why and she said because she thought grime was aggressive and didn’t have any real content.

‘There For You’ is different, it’s an old school grime beat with a 2015 vocal. Don’t forget, grime MCs are artists too, we’re not just grime MCs – we do make songs that actually mean things. The shouting, the hype – that’s just a stage performance, taking our cues from bashment and what not. People are always way too quick to pigeonhole what we do.

You mentioned “attacking the beat” earlier – I really like that as a phrase to describe what a typical P Money track sounds like. Is it always a conscious decision to “attack” records or is that just more of a natural reaction to whatever beat you’re listening to?

I would say yeah, it’s something I’ve always done naturally but at the same time, I think it’s because I really vibe to a beat. I’m very specific with beats, I have to catch a vibe and if it has the right aggression, it gives me an opportunity to give that back. I think to myself, “Oh wow, how am I gonna be better than this beat? How do I jump on this without destroying it?”

I mean, if someone presents you a piece of art, hung on a wall and it’s supposed to be a collaboration with another artist, you’ve got to add something to it without fucking it up. There’s pressure, but you’ve just got to finesse it! [laughs]

You must get told this a lot, but your stage persona – raw, aggressive, powerful – is completely at odds with your character off stage. You’re so laidback! How would you explain why the two are so different?

If you only meet someone in a certain situation all the time, that’s all you’re going to know about that person. I can’t be chilled on stage so when I see people off stage, I can say, “You’ve met me now.” I’m not the performer off mic, that’s just one part of my personality – I’m a human being at the end of the day. I didn’t come out the womb all hyped up spraying bars, do you know what I mean? I do get the question a lot though [laughs].

What was behind the decision to release Money Over Everyone 2 by yourself then, as opposed to releasing it through Rinse?

I just wanted the opportunity to do this all by myself. When I speak to the younger MCs, now I can say, “Look, I did this with no help.” I put my hand in my pocket, recorded five videos, paid for PR, artwork, got the CDs pressed up and released my own merchandise. I can take this knowledge now and move it forward. To be honest, I needed to know this stuff because I’ve just set up my Originators label too. Don’t forget it’s easy to have a label to do everything for you, but I’d never know the processes behind releasing music myself if I hadn’t done this.

Looking ahead, what can you tell us about the Rinse album?

I haven’t locked down a name for it just yet but in terms of what to expect, if you listen to stuff like ‘’Who’s In Charge’ and ‘There For You’, tracks that show a different side, then you’ll get an idea. You get to know a lot about me too – the intro track is literally about my life. Being 13 in school growing up in New Cross and Deptford, being in court at 15, not having a relationship with my dad – and that’s just the intro!

Fans want to know about their favourite artists and I want to let people know. I want people to get to know me. I’ve thought about calling it ‘Duality’ or maybe ‘Both Sides Of The Coin’ but I might put it out there for a vote. Maybe the fans can name it [laughs]. On a serious note though, I’d like to say that I’ve always wanted to release an album with Rinse no matter what, so I’m really proud to be doing it.