It’s been 32 years since MIDI was introduced as the standard for connecting musical devices.

In that time the technology has developed to let software communicate with hardware as well as transmit messages over USB, Wi-Fi and Bluetooth, but underneath it’s still the same 32-year-old technology: unwieldy, and likely to leave your studio covered in a tangle of wires.

Earlier this month Ableton announced a new technology it’s been quietly working on that could be the first real leap in electronic music connectivity since MIDI was introduced in 1983. Its name is Link, and it looks at the connectivity issue from a broader perspective. Where MIDI wanted to connect our instruments, Link wants to connect people, making it as easy for electronic musicians to jam together in the same room as those using instruments that don’t require a steady stream of ones and zeroes.

The closest thing MIDI has had to a successor in 30 years is Open Sound Control (OSC), but it’s still a technology that shares performance data with instruments. Link works on a higher, more invisible level: if three musicians in the same room are running Live, they can connect with the Link protocol over a wireless network and each user will stay at the same tempo. It’s not just Live that uses Link either – Ableton has designed Link so it can be built into any software, including iOS apps. The technology doesn’t transmit audio, but it opens the way for electronic musicians to collaborate in an unprecedented way.

The primary thing that marks Link out from MIDI is how easy it is to use. While the older technology requires knowledge of an arcane system of channels and CC messages to make it do what you want, Link does everything automatically. It also dispenses with the master/slave relationship and gives all users equal ability to change the tempo as they like.

“I wouldn’t even directly compare the two [technologies],” Michaela Bürgle, head of the Link development team, tells me. “You get on the same network and you switch it on. There’s no need to select an input or output channel – it’s as simple as a switch from off to on and you’re ready to go. I have a background playing in bands with traditional instruments and for me it’s very natural to be able to just get together and play – we don’t want people to be blocked by clumsy workflows or have to jump through hoops to connect software or devices.” 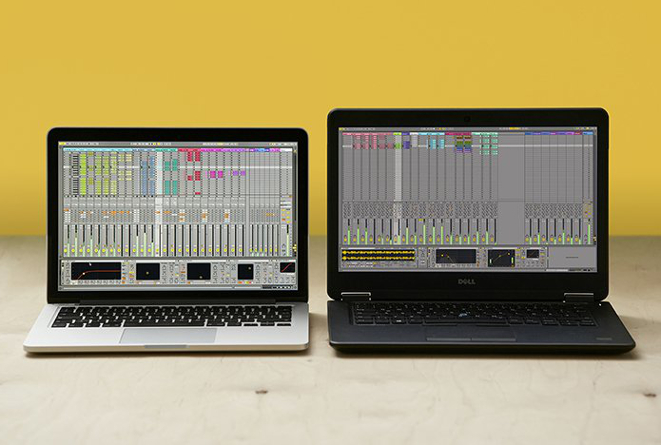 As the Link technology is built into Live itself and doesn’t require a separate app to run, it opens it up to being embedded in other software. As well as connecting both Windows and OSX versions of Live, Link has been seeded to select iOS developers ahead of its launch for use in their own apps. For example, you could have one user running Live on Windows, one running an app on iPad and another on iPhone on the same network and they will all play in time if Link is enabled. iOS apps can even use Link without Live running on the same network.

The mobile aspect is perhaps what makes Link such a potentially game-changing technology. Mobile music-making apps have been growing in popularity over the past few years, but incorporating them into existing setups is often a challenge. Ableton is sharing the Link software development kit to developers for free, and the result could be a new ecosystem where incorporating an iPad into a larger setup becomes almost easier than loading a VST into Live.

Of course Link won’t replace MIDI entirely, and nor can it – people are attached to their hardware synths, and those aren’t compatible with the technology. As Bürgle explains though, Link and MIDI sync can work together, and if you have a system using Link then you can still output MIDI clock data. While Link won’t magically connect everything in your studio, it does create a situation where musicians can be responsible for their own hardware running through Live, which is then connected in turn to other users via Link. For those used to connecting to each other on stage via a tangle of cables, it’ll probably make life on tour much less cluttered.

Link also uses relatively little network traffic, and has been successfully tested with 10-15 applications running, but what about over greater distances? At this stage, Bürgle says Link is very much a technology to be used locally. “I think in principle it could work, but probably what you would hear in one room on one side of the world would be at a different time than what you would hear on the other side of the world,” she explains. “I don’t think the current solution caters to that. I guess it’s possible to extend the solution, but I don’t see the immediate usefulness of it – there are other problems to solve before we get to thinking about that.”

Link is currently only available as part of a beta version of Live 9.5.1, but it will be made available for everyone to use soon. It’s clearly a technology in its infancy, being currently limited to Live and iOS apps, but Ableton has promised Android compatibility in the future. If it’s a success, there’s no reason why we couldn’t see it in products like Native Instruments’ Maschine or similar. “I’m pretty confident it’ll be adopted as a standard,” Bürgle tells me. “Reactions so far have been great. Once people actually get their hands on it and try it out invariably they say: ‘This opens the door to a new way of playing.’”

For those looking for a way to collaborate with fellow musicians in other countries or connect their existing synthesizers, Link isn’t the solution they’re looking for – yet. But then it’s not really supposed to be: it’s a tool that allows electronic musicians to be as spontaneous as an acoustic ensemble. It might not sound like much, but it could change the way electronic music is made quite considerably.