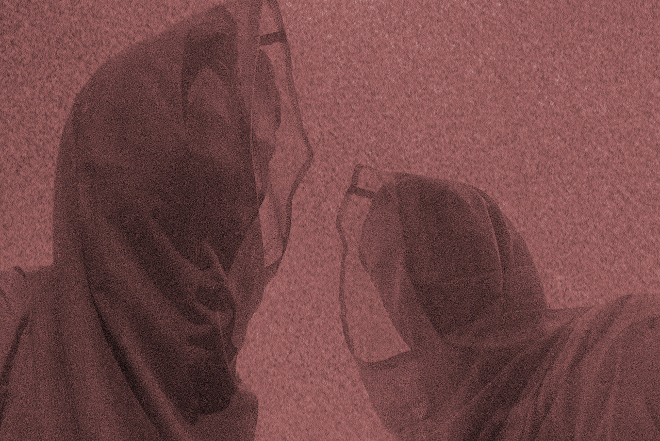 SHXCXCHCXSH are a faceless techno duo in a large sea of incognito producers, but their music is far from anonymous.

Since emerging in 2012, they have become one of the most distinct voices in the world of searing, apocalyptic techno, releasing two albums and several EPs for UK techno producer Shifted’s Avian label. Their music is often overwhelmingly ferocious, but they also know when to exercise subtlety, with 2014’s Linear S Decoded walking the line between big room club tracks and ambient music.

This week sees the release of their third album SsSsSsSsSsSsSsSsSsSsSsSsSsSsSs, which the duo say over email was written in just two weeks. “The process was very spontaneous and we have no good answer as to exactly why, other than a good moment behind some stage at some club.”

The album sees the Swedish duo continue to expand on their uncanny sound, with a thread of eerie, digitised vocals running alongside distorted textures and elastic percussion.”We have been doing very analog things for many years, so we wanted to try something different,” the duo explain. “This time we used our own, as well as other voices a lot, digital samples obviously, but in an analog environment. There is no philosophy behind it, we just want to go in to our own world as much as possible, and using our own sounds rather than industry standards makes it easier.”

Unlike Linear S Decoded, whose more organic sound felt inspired by open spaces, their third full length is darker, more isolated affair. Is it related to being located in the Swedish city of Norrköping, which doesn’t have any kind of techno scene?

“Everyone needs some sort of inspiration and feedback to know what to do, so talk about isolation is quite relative,” the duo says. “We have different periods, some when we’ve been in the middle of it, like spending all weekends in the club and on Discogs in the week. But over the past few years we have been more isolated from the scene, and that’s good for the creativity, it makes it easier to focus. Also the Swedish climate is dope for this, there’s not much sunshine flirting with us outside, making us feel bad about ourself not going out – we can just sit inside and do our thing.”