Kode9 has reframed last year’s acclaimed Nothing with architect and visual artist Lawrence Lek, and the result is a discomforting audiovisual experience called Nøtel. George Kafka checks in.

Meeting Kode9 in the cold light of a chain hotel feels a little incongruous. As a stalwart of experimental electronic scenes unfolding in pitch-dark clubs, it’s surprising that he makes it out during daylight at all. “I’ve always been a lights-out kind of person,” notes the producer, DJ and Hyperdub label boss. But fittingly we’re here to discuss Nøtel, a project that brings to life Steve Goodman’s debut solo album Nothing as a simulated tour through an eerily empty hotel in a post-human future.

Created with artist and trained architect Lawrence Lek, Nøtel is a live collaboration that plays out between Lek’s projected video game visuals, which follow a drone through the abandoned hotel, and the fusion of underground electronics – grime, footwork, gqom, glitch – that is Nothing. The Nøtel is isolated and vacated, made of shiny yet repellent surfaces that seem to complement the sense of discomfort, disconnection and overwhelming emptiness that pervades Goodman’s album. Yet as the record progresses we move from objective observers of machines to empathetic participants; like Blade Runner’s replicants, the drone flying around the hotel starts to take on a humanity that is glaringly absent from the site. Eventually we identify with its meandering search for something beyond the Nothingness.

Lek’s previous work has also dealt with architectural surface and substance. In 2015’s Unreal Estates he depicted a future in which London’s Royal Academy of Arts has been bought by a Chinese billionaire to be turned into a luxury private mansion, again using video game graphics to explore the neoclassical building and its shiny Jeff Koons sculptures and Yayoi Kusama wallpaper. Nothing really happens, but that’s partly the point. Behind the pomp and sheen of ‘cultural capital’, there is nothing – an idea which Lek and Goodman have extended in the empty rooms of the Nøtel.

“We were looking at lots of different ideas for places,” says Lek. “Stock markets, hospitals, airports – basically these ‘non places’ which embody aspects of contemporary capitalist life, places that are anti-memory, places that are alienated by definition.” The footprint of their imagined Nøtel forms a huge zero, resembling Foster + Partners’ design for the new Apple headquarters. In the show we follow one of the drones programmed to build and operate the hotel as it navigates the circular structure. Moving through anonymous corridors, the ‘Third Ear Spa’, a bar with an endlessly playing piano and a subterranean service sector, we realise that all the humans have disappeared (exactly why is never disclosed) and the drones have been liberated from their programmed enslavement. It’s fully automated luxury communism gone wrong; Asimov meets Novara Media. Screensaver graphics they are not. “If I’m going to do this project which is so different from what I usually do,” says Goodman, “then it needs to have something more going on in it than just pretty patterns.”

For Goodman, who’s more used to hiding in the shadows of the DJ booth, the experience of being watched by an audience is an unfamiliar one. “I’ve always been wary of doing visual sets because I know it stops people dancing,” he says. “People concentrate and your body’s fixed in a certain way. Casting a light over the audience makes people feel more inhibited – that’s always been my thing about turning the lights off, getting people to dance and get into this intimate thing.”

It’s a valid concern. At their performance at MIRA Festival in Berlin, the crowd is split into factions – those with their eyes down, dancing to the music, those with their eyes fixed on Lek’s video game graphic, and those (myself included) playing with a bit of both. Goodman says this mix is “a total ambition” for the project, yet for the viewer and listener the complexity of both the audio and visual material can make for a disjointed experience. Unfortunately this disjointed sensation was repeated over the day at MIRA. Founded in Barcelona in 2011, the festival has built up a solid reputation for showcasing new performances at the intersection of electronic music and live visuals. MIRA seemed sure to build on this pedigree at its first Berlin incarnation, not least on account of the venue, the Funkhaus Nalepastraße, a former GDR radio broadcasting centre and one of the most spectacular venues in the city.

Yet the weekend’s performances often failed to live up to the sum of their parts. A blistering live set by Andy Stott was accompanied by rather staid modulating geometries manipulated by Onionlab, a particularly disappointing show from the Spanish studio whose facade projections are usually nothing short of gobsmacking. Kuedo and Werkflow were similarly dissonant, with the Planet Mu producer’s Vangelis-meets-Vex’d material backed by nondescript flares of colour and abstract shapes resembling roofs, railings and tunnels. In both cases the visuals added little more to the performance than the swirls of a Windows Media Player visualiser. 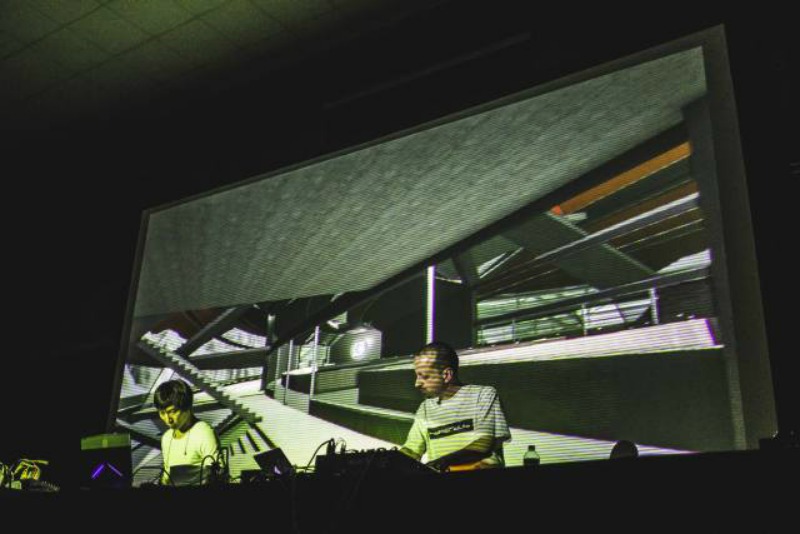 Far more interesting was Vessel’s set with video artist Pedro Maia in the Funkhaus’ cavernous recording hall. Maia’s grainy analogue glitches, screened at the back of the room, were a powerful accompaniment to Vessel’s relentless technoise performed at audience level in the middle of the room. Breaking down the traditional performer-audience layout created more intimacy and allowed sound and vision to hold equal ground in the performance. The audience could also move between the two, allowing our experience of the room itself to play a part in the show, rather than fixing our point of orientation, a situation of which Goodman is wary.

To Goodman and Lek’s credit, Nøtel goes some way to breaking down that same spatial orthodoxy by creating a new, virtual space. Following Lek’s drone, it’s easy to get lost in the virtual world, giving the performance a depth that goes beyond slick screen facade of other shows. Entering the building to the siren-like synths of Nothing’s title track is as thrilling as embarking on a 20-hour video game marathon, and stumbling across a hologram of Goodman’s late collaborator The Spaceape as liberated drones dance behind like dragonflies is a poignant tribute to the legendary MC. Equally, the clunky flight path of the drone (operated at times by Lek turning his back to the audience to play the ‘game’ on the enormous screen) lends a human touch to the project that plays off the automation of the Nøtel and the sterility of some other visual performances at MIRA. 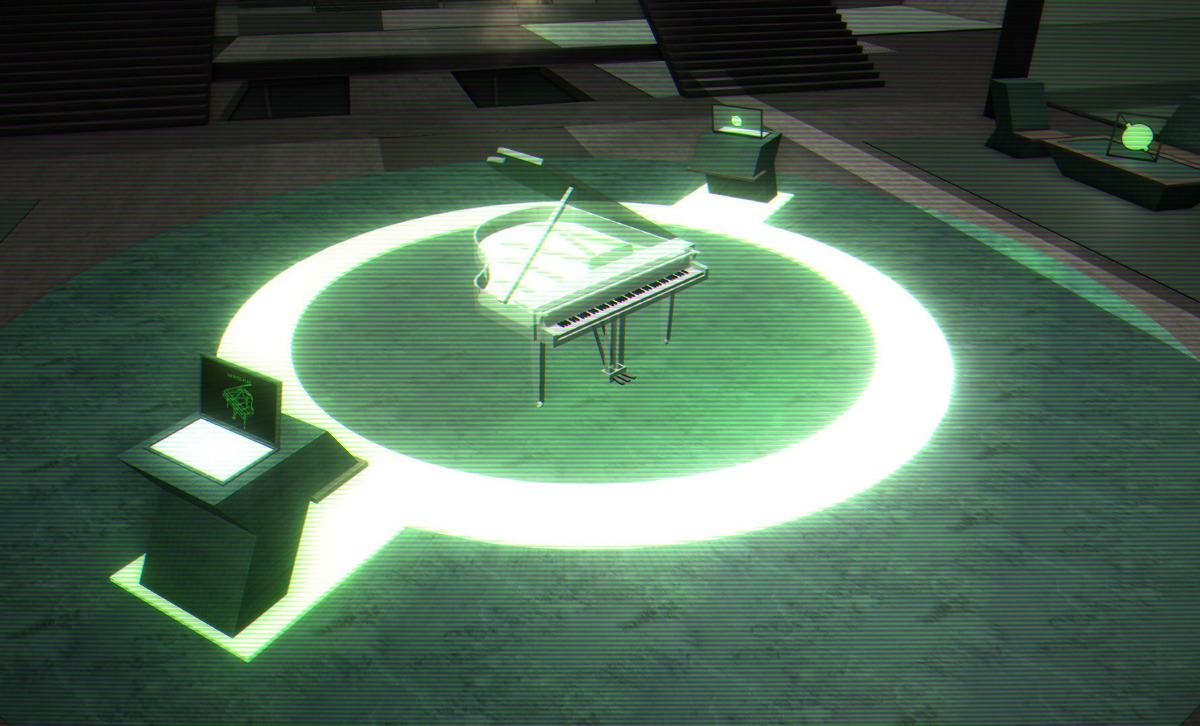 If this year’s MIRA Festival shows us anything, it’s that the future of AV performances lies in exactly these scenarios, where the visual format is liberated from the spatial and technical restrictions imposed by the projector, and the audience can be as immersed in light and image as they are in sound. The project is still in progress, and Goodman and Lek are now looking into different ways to release the Nøtel, perhaps as a VR experience or as a fixed installation, “so people can actually explore the world in their own time, as opposed to being led around it,” says Goodman. Nøtel arrives in Sónar this weekend for their most high-profile performance yet. If Goodman’s trajectory up to now is anything to go by, there’s no telling where they might take it next.