SHYBOI is the latest talent to join the ranks of the ambitious Discwoman collective of non-male selectors. The Jamaica-born, Brooklyn-based DJ and visual artist toasts her signing by telling Aurora Mitchell about the outlaw culture that inspired her new audiovisual mix, #CURRENTMOOD, which we’re premiering below.

During Black History Month this February, New York City DJ collective Discwoman teamed up with Boiler Room to coordinate an all-black, all-woman line-up in Brooklyn, with sets from Juliana Huxtable, UNiiQU3 and BEARCAT. Kicking off the night was from Yulan Grant, known as SHYBOI. Gripping the room in the tense negative space between the metallic whomps and foghorn sirens of Rizzla’s ‘Airlock’, she then took us on a half-hour trip through thundering club workouts, glitchy breakbeat, hip-hop and kuduro, including an edit of Hardrive’s classic ‘Deep Inside’.

“Playing with people who I truly respect is always rewarding – it forces you to step your game up,” Grant recalls via email. “The fact that the line-up was slathered in unapologetic melanin, shea butter and black girl magic was the icing on the cake.” Reflecting on the audience she faced from inside the booth, she underscores an aspect of the night that’s also at the heart of her intentions as queer black artist. “It’s always interesting to see who inhabits these sort of spaces. All black womyn lineup, majority white male crowd. Kind of symptomatic of how black culture is consumed isn’t it?”

Since launching as a platform for women DJs in 2014, Discwoman has brought the diverse talents of DJ Haram, Umfang, BEARCAT and Volvox under its umbrella and recently boosted its industry power by launching as an agency, DW Artists. Having formed a friendship with the crew after performing a few shows alongside Discwoman artists, Grant was recently invited to join the agency by the collective’s co-founder, Frankie Hutchinson. “I said, ‘duh’.”

To celebrate her signing, Grant has unveiled a short audio-visual mix titled ‘#CURRENTMOOD’ – eight minutes of bed squeaks, ha crashes and police sirens spliced with footage of motorcyclists speeding down highways and causing carnage. “The mix replicates how I work,” she explains. “I’m constantly bombarded by stimuli, especially if I’m investigating a project. I’ll have a talk playing the background, a playlist chiming in and out, and a show streaming in the corner. As soon as I wiggle out of the matrix of a work file I’m surrounded by this very hectic environment I created, which makes me want to continue working. I believe booby-trapping yourself is important – it keeps you on your toes. That way no one can truly come for you.”

Grant is also a visual artist, having directed videos for Hood By Air, BEADS and Rizzla and presented video work at New York’s MoMA PS1; together with her sister Yolene, she also curated a summer series, UR BODY IS MIND, at Brooklyn art space Stream Gallery last year on the invitation of Discwoman’s Christine Tran. Her experience in the art world feeds into her approach to the mix, which pulls its clips – including around 50 videos from the motorcycling world – from secondary sources.

“I’ve been exploring video appropriation for the past couple of years,” says Grant. “The need to physically shoot videos like this is unnecessary for me, because the people who are already a part of this community have made the content that truly replicates them and their environments.  I’m simply a bystander eagerly waiting to fuck it up for my own use. It ties directly back into the role of the selector, which is to source, interpret and bridge the gap between man and machine to create a new environment.” 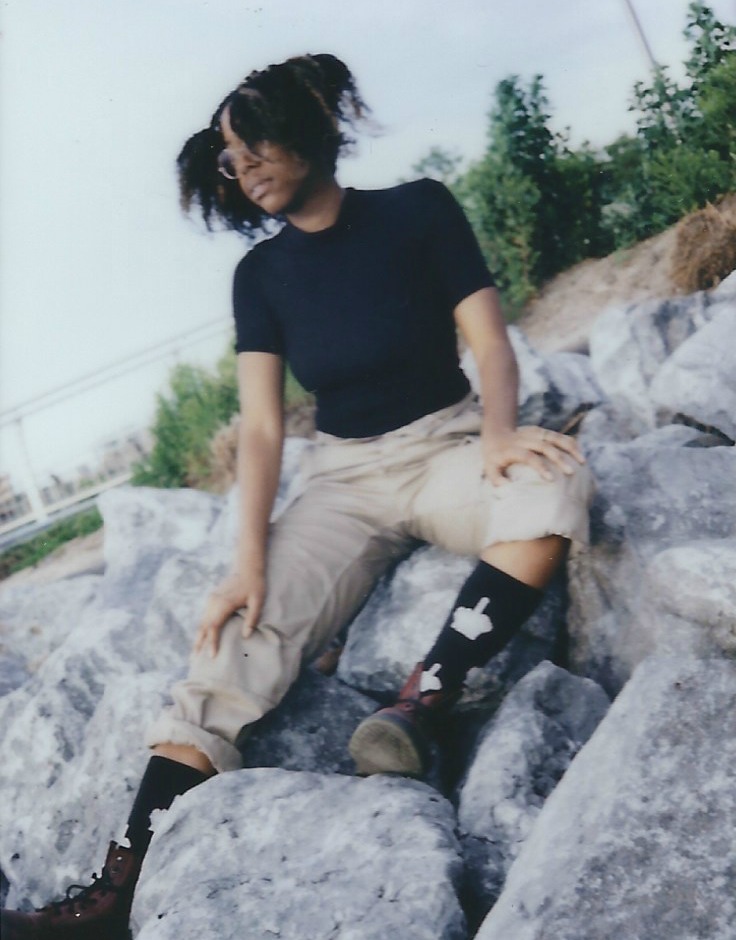 “Queerness brought us together, but it’s our mutual appetite for destruction that keeps us together”

The Jamaican-born DJ is also part of New York City-based queer collective KUNQ, and expressions of queerness are integral to SHYBOI’s work. KUNQ has given Grant a “familial structure” and an opportunity to join forces with other queer artists, all of whom share an unrestricted approach to genre, format and sound quality. “We challenge each other in a very casual way,” she says of the crew, which includes Rizzla, Kilbourne, False Witness, FXWRK, Micah Domingo, Batty Jack and Stud1nt. “There’s a symbiosis that has formed with all the members where we can click immediately on music, politics, art or just plain old badmind.”

Queer nightlife has played a crucial role in Grant’s own life; as a teenager she was determined to find a way into the spaces where she could freely express herself. “I’d sneak into shows, borrow IDs, bust through emergency exits, you name it. I just had to be on a dancefloor with the community. I needed us to feel the beat together, it was imperative to me,” she remembers. “Nightlife has given me a chance to foster a community of creative, eccentric hardworking queers – but it’s the conversations that happen beyond the club that hold us together.”

In its exploration of “outlaw culture”, the mix strikes an unexpected note of solidarity between two very different communities. “#CURRENTMOOD is characterized by the need to step away from mainstream society in search of rebellious freedom, autonomy and the unknown,” she says. You feel it as you watch bikes cruising down highways, performing dangerous stunts and ultimately disintegrating in a ball of flame; the bikers achieve union through destruction, a paradox that Grant understands as a queer artist and activist. “Queerness is the umbrella that brought us together,” she points out, “but it’s our mutual appetite for destruction and refusal to replicate failing power structures that keeps us together.”

Watch next: Go behind the scenes of NYC’s Discwoman collective in Tribes