Meet Alexandria and Ethereal, the Aaliyah and Timbaland of Atlanta’s Awful Records

With their defiantly underground tilt on hip-hop and R&B, Atlanta collective Awful Records has fielded some of the most intriguing new artists of the last three years, from clan patriarch Father to KeithCharles Spacebar, Archibald Slim and PRINCESS creator Abra. Chris Kelly heads to ATL to meet the crew’s deepest partnership.

A jungle break punctuates a woozy, jazz-accented synthscape. A female voice emerges from the cloud and coos, “Do you want to take a ride with me?” The song is ‘Ride’, and it appears on Car Therapy, a 2012 album produced by Awful Records producer-rapper Ethereal. The singer is Alexandria, and it was the first dispatch from the collaborative duo. Since ‘Ride’, Alexandria has released an album, two EPs and a handful of loosies produced by Ethereal, songs that fuse her classically trained, pristine R&B vocals with Ethereal’s experimental beatcraft. And even though their catalog is relatively small, they already seem poised to redefine R&B in the way that Timbaland and Aaliyah did at the turn of the millennium.

I’ve been trying to interview Alexandria and Ethereal since coming across Rebirth while researching Awful Records in the fall of 2014. But scheduling Skype time when the pair are working in the studio proved difficult – it made more sense to do the interview when we were all in Atlanta. I met them at a quaint bungalow on a tree-lined street in a quiet, residential area of Atlanta’s East Lake neighborhood. Along with Ethereal and Alexandria, the house is home to Awful founder Father and “Awful Madre” Dash Romero (“Everybody else camps out,” Ethereal adds). It’s the latest in a long line of Awful group houses, and it’s exactly what you’d expect: cluttered and unkempt like a frat house, a handful of people come and go and weights and Chick-fil-A bags are scattered about. It’s the type of place that hosts house parties on weekends, but as the unofficial headquarters of Awful, it’s also where some of the best rap and R&B is made. We head to Ethereal’s bedroom studio to finally get Alexandria’s story. 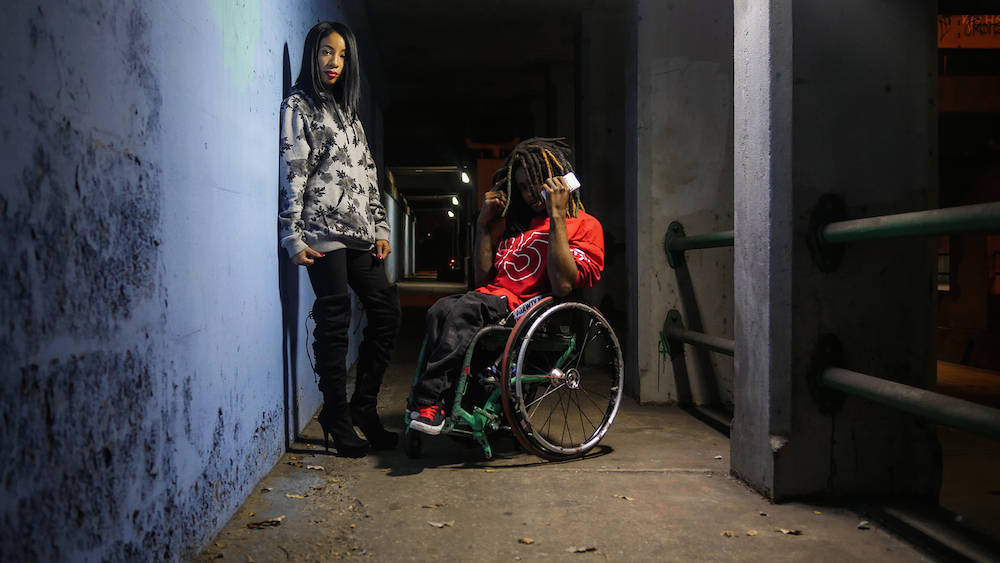 “I was asking the universe to send me a singer”Ethereal

Alexandria grew up in Cincinnati, Ohio and attended a performance arts school from fifth to ninth grade, studying vocal performance and creative writing. It was there that she learned music theory and how to harmonize. “It molded me,” she explains while sitting on Ethereal’s bed. “If I went to a regular school, I wouldn’t know anything about the depth of music.” At 14, she moved to Dallas and finished high school, sharpening her writing skills as she went through the difficult times that mark adolescence. “I went through a lot in my personal life,” she says. “Growing up gives you a lot to write about.”

She decided to pursue a career in music after high school, picking Atlanta as her eventual destination thanks to its growing music scene. She applied to colleges there, picking “whichever one wrote [her] back first” but “barely” attended class, eventually dropping out to focus on music. She started reaching out to producers on MySpace, asking if they were looking for singers. Atlanta hitmaker Polow da Don responded, but she didn’t have any music to send. “That taught me that you have to be prepared,” she says. Soon, she made her first demo with fellow Cincy expat Justen “J. Rob” Robinson, which she used to network in Atlanta.

In 2011, she connected with Ethereal. “I never heard anything like his music,” she gushes. She wrote to him on social media “as a fan,” and found out that he had heard of her through the grapevine. “I was asking the universe to send me a singer,” he adds. He had just recorded Abstractica, an album released by Yelawolf’s Slumerican imprint in 2011, and had become “infatuated” with Brandy’s music. “I realized how much I listened to it and knew it, how much it affected me,” he says of her music, an appreciation that led to his decision to start producing R&B. Plus, he adds with a laugh, “I already know I’m super-good at rap.”

They soon met face-to-face, and their artistic chemistry was intense and immediate; Ethereal says he made a “split-second decision” to dedicate his time to their collaboration. For Alexandria, it was an experience different from the ones she had had with other Atlanta producers. Their work was “organic and came together naturally,” she says. “With other producers, it was so forced: they had a specific sound, or were keeping up with what’s hot. You could tell the difference between people who are doing it for money and the people who are genuinely passionate about what they do. There’s longevity [in music] if you’re passionate.” 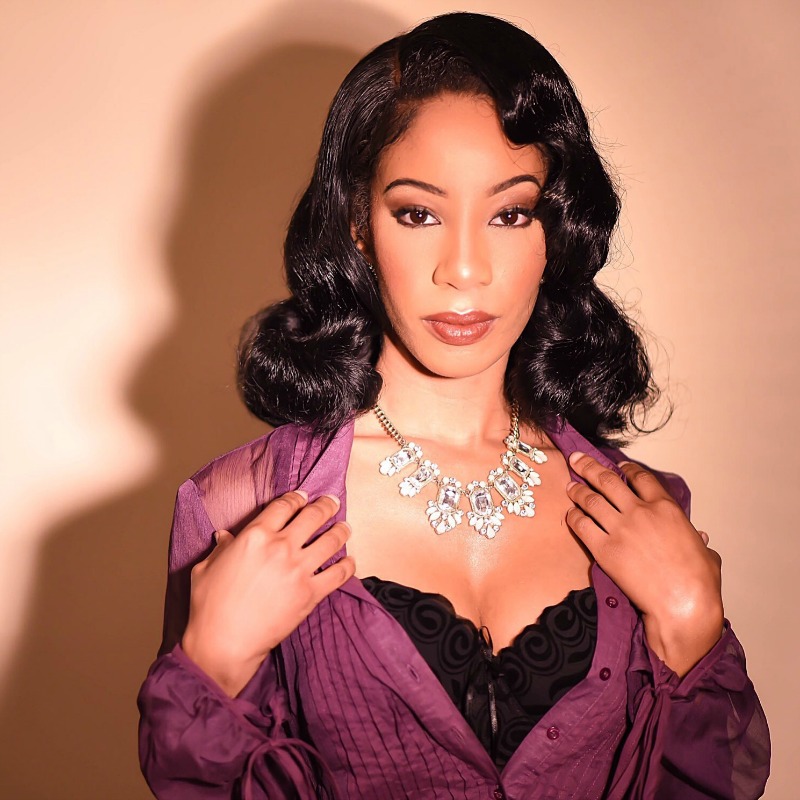 “Ethereal challenges me to be a better writer, to not be afraid to step up to the challenge”Alexandria

That passion is apparent on Alexandria’s Ethereal-produced 2014 album Rebirth, which balances the R&B of years past while being decidedly future-facing. It also sidesteps the false dichotomy of “alt-R&B”; Ethereal’s off-kilter beats and namesake ambience leave the right amount of air for Alexandria’s old-school, upfront melodies and harmonies. It’s lush and fully-formed, yet was almost totally slept-on. Still, the album is key to Alexandria’s development as both an artist and a young woman.

Rebirth is her response to an abusive relationship, and it sees her processing the complications of real-life trauma, finding a well of personal strength and emerging – as the title suggests – reborn. As she sings on ‘I Forgive You’, “Some days I hate you, some days I love you, some days I’m one of the many men that wish death upon you […] that don’t make me feel no better […] I’ll be satisfied just letting you know that I forgive you.” “Rebirth was an experience within itself,” she says.

The album wasn’t simply personal catharsis – it’s also a lifeline to others. “That was my way of making a negative into a positive – let me get this all out so I can heal, and in the process, help someone else. I’m all about helping women and encouraging them – that’s what I’m really passionate about,” she explains. “It’s overwhelming – in a good way – the younger girls that write me and say the nicest things. Just how much [the music] helped them, what they learned from it, ‘I just needed to know my worth’ and things like that. That really touches me and let’s me know I’m doing the right thing.”

Since Rebirth, Alexandria and Ethereal have joined forces for a handful of songs for Ethereal’s many releases and a pair of her EPs: the moody Bad and January’s Promise. The latter might be Alexandria’s best release yet: ‘Pour’ finds her experimenting with Janet Jackson-like phrasing, and ‘Problem’ pairs her with an equally defiant Lord Narf. For his part, Ethereal’s productions hide even more digital gremlins under warm blankets of synth.

The opening track on Promise, ‘Complement’, may be about finding the perfect romantic relationship, but it applies to Alexandria and Ethereal’s musical relationship as well. “He challenges me to be a better writer, especially with melodies and emotion in a song, to not be afraid to step up to the challenge,” Alexandria says. “It makes me better.” For Ethereal, the collaboration is a symbiotic one. “I know I can help her grow and it will definitely help me grow as an artist and a producer. She’s helped me with songwriting, learning how to make a beat that doesn’t overpower the artist’s vocals,” he says, adding that his brain has “defaulted” to making beats for her. “I’m definitely blessed for her to be here.”

With half of 2016 in the bag, the pair is set to finish the year strong. Ethereal has an extensive release schedule planned, and Alexandria’s album Cut Of Cloth is due on August 16, led by ‘Good Before You’ (premiering above). From the sound of a new song that they play me, she’s as confident as ever: the untitled track finds Alexandria warning a lover to get his act together before she leaves him, her sultry vocals layered over Ethereal’s pneumatic drums, throwback breakbeats and hypnotic organ chords.

As for the rest of her recent output, Alexandria says that she’s happier than she was during the tumult that inspired Rebirth, more able to focus on herself and her own growth. “I’ve had to think about what I want, about the woman I’m still becoming,” she says. Whatever she figures out about her life and, in turn, her music, it looks like the ‘Ride’ that Alexandria and Ethereal started in 2012 is just beginning.