Since around 2008, Cubans have been getting a weekly fix of foreign music, film and TV via an underground network of pirate entrepeneurs armed with massive hard drives. Known as “El Paquete”, this DIY business is the real star of Give Me Future, a new documentary about Major Lazer’s historic gig in Havana last year, as April Clare Welsh finds out.

For the 3.2 billion people with internet access at their fingertips, streaming your favorite music, films or TV shows has never been easier. But on the communist Caribbean island of Cuba, binge-watching Netflix doesn’t come so easily. The country has one of the lowest internet penetration rates in the world, with less than five per cent of its 11 million people online, and anything that isn’t state-run media is prohibited.

The Cuban government opened 35 paid public Wi-Fi hotspots in Havana in 2015, but the average $2 an hour rate is a wallet-busting price for anyone earning the monthly state salary of $20. Instead, the majority of Cubans must venture offline for their weekly fix of digital content, tapping up a vast underground piracy network called El Paquete Semanal.

The Paquete comprises a one terabyte hard drive of the latest Hollywood movies, TV series, music, and magazines – anything from Game of Thrones and Cosmopolitan to Beatport Top 100 packs and reggaeton mixes – compiled by hundreds of distributors and delivered to the home of the subscriber, who then has 24 hours to copy the information to their computer. It costs around 5 CUC (Cuban convertible peso) a week, which is roughly $6.50. With no regard for copyright law, El Paquete is plainly illegal, but the government largely turns a blind eye because the content is pirated, so no rightsholders are being paid – a position that’s in line with the ongoing US embargo against Cuba. The country’s widely upheld ‘no porn, no propaganda’ motto also tends to ensure immunity.

Yuri Gonzalez began working on El Paquete more than three years ago, and in that time he claims he has never been sanctioned by the government. For Gonzalez, El Paquete takes on a didactic role. “We have reached the whole country, and my message on the Paquete has always been about teaching people, educating people on what’s out there,” he tells FACT over email.

Gonzalez works with Dany Garcia at Delta Vision – one of Havana’s leading Paquete suppliers. “Myself and Dany wanted to create a great offline resume of the internet to provide for the Cuban people who can’t get online,” he explains. “In Cuba, there is the thirst for global music and Billboard, MTV, VH1 and VEVO are all very popular here so we head to those sites first. I love music and that section is my speciality so I also know all the best places to download free Latin music, for example flowhot.net and other similar sites.”

His co-worker Garcia is just one of the Cuban entrepreneurs featured in a new documentary by US filmmaker Austin Peters. Give Me Future is ostensibly a document of Major Lazer’s historic 2016 concert in Havana, which saw the party outfit play for free to a crowd of nearly half a million Cubans. But, as Peters explains, the documentary is “not really about the band at all.” Instead it shines a rare light on Cuba’s DIY entertainment industry via interviews with some of its biggest players.

“The aim from the beginning was to make a film that was about the people of Cuba – what it’s like to be a young person in Cuba right now,” says Peters. “So much of what we glimpse of Cuba is framed by the past, by its vintage cars and music, but what’s the reality of being a teenager in Havana in 2017?”

The Cuban government has historically blamed the US for the poor state of telecoms infrastructure in the country. The US and Cuba cut ties in 1961 at the height of the cold war, preventing US citizens from travelling to the Caribbean island and leading to a decades-long economic embargo on the island. However, on December 17, 2014, Presidents Barack Obama and Raúl Castro instigated a diplomatic thaw which included the opening of a US embassy in Havana for the first time in more than 50 years. By July the next year, normal diplomatic relations had resumed.

On March 6, 2016, Major Lazer become one of the first US acts to play in Cuba since the breakthrough. Australian-American band Dead Daisies – made up of ex-members of Guns ‘N’ Roses, INXS and Thin Lizzy – had played two low-key shows as part of a cultural exchange in February 2015, but aside from Audioslave’s free, 70,000-capacity show in 2005 – which had made them the first Americans to play Cuba since the ‘70s – nothing on this scale had been organized in recent times. 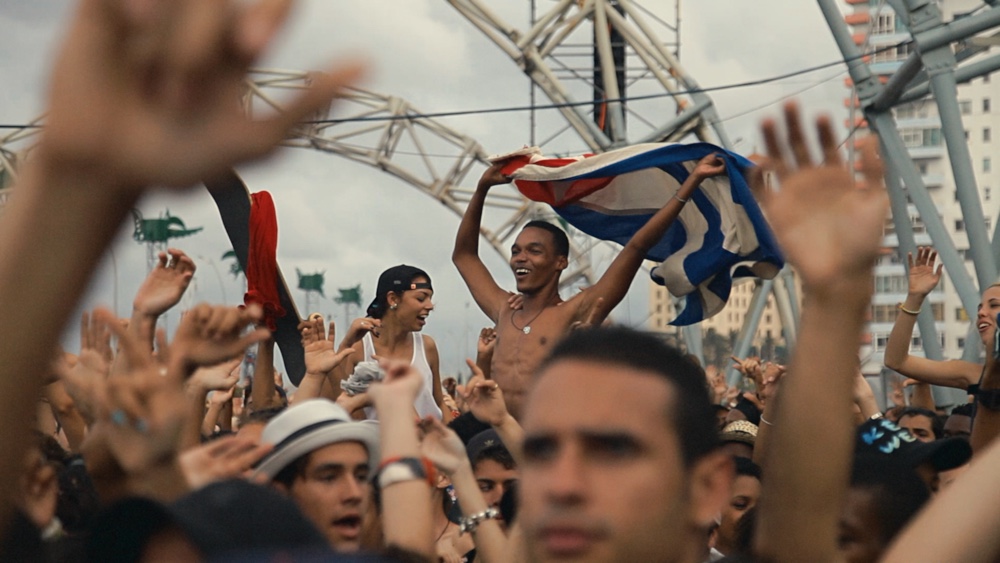 Peters had wanted to visit Cuba “for as long as he can remember,” so he jumped at the chance to film the documentary after receiving a phone call from Major Lazer’s team. “The Cuban government had only just agreed to let us shoot something commercially three weeks before,” he says of the process. “I think they were still coming to terms with the fact that this is now something that is allowed to happen.” Half a million people turned up to Major Lazer’s free gig at Havan’s Tribuna Antiimperialista, which the band funded entirely themselves.

The band were keen for Peters to turn his lens on Cuban life. “Diplo was very open about me doing a concert movie that wasn’t about them,” he says. “I think they actually preferred that. It was really important to them.”

Without the luxury of online communication, organising the shoot ahead of the crew’s arrival proved difficult. “We couldn’t do a lot of the usual pre-scouting or pre-casting, so everything kind of unfurled when we got there, by word of mouth,” the director recalls. “Everyone who worked on the movie is Cuban, so we would talk to them and I would tell them, ‘This is the movie I want to make.’ I didn’t want to make a tourist movie, I didn’t want to make a movie of postcards. I wanted it to be about a Cuba that you’ve not seen before – and everyone was really on board and excited about that concept. They would point us in different directions to find people who would be the best fit.”

Some of these connections ended up being dead-ends, but other times Peters was led to extraordinary characters. Garcia was one of those. “We had to get his contact, who had it from someone else,” says Peters. “He had to come and meet us and check us out and decide if he was down to shoot with us. I gave him a bunch of videos that I had directed on a jump drive – then he went away and we heard from him 24 hours later and he said he was down to do it.”

Another star of the documentary is Iliam Suarez, a young woman Peters describes “a kind of Cuban Björk.” Suarez – who also sings in a band called I.A – is the muscle behind Havana’s 30,000-strong electronic festival Pro Electronica in Havana. “If she worked in the States she’d be on £175k and working for Live Nation,” suggests Peters.

Suarez also gave the film its title. “In one of the scenes in the beginning, she says that she feels like she is ‘trapped in a city that’s trapped in time’, filled with ‘50s cars and instruments where nothing becomes new. She told me that she likes listening to electronic music because it gives her the ‘gift of a future’ and it makes her think of tomorrow and not just of today. And that is a way that she is able to break free from being trapped in time.”

Electronic music has a massive audience in Havana, with the industrial-style Fabric del Arte venue providing a hub for live shows, while raves routinely take place in the jungle. “Musically, there are different schools of thought out there,” Peters says. “Havana rave veteran Djoy de Cuba champions smarter IDM-type stuff, and then you look at what’s on The Paquete and it’s all EDM, Miami bass and reggaeton is the thing. Wherever you are you will hear reggateon, of course.”

He continues: “So a lot of the kids had very specific questions that they wanted to ask Diplo about production. They wanted to know how to master records and mix records and make their productions better. Because everyone is making music in a very pieced-together way. Dany has two computers and they are both made from other computers. That’s how everyone works over there – there’s no Apple Store and there’s no place to get proper gear.” 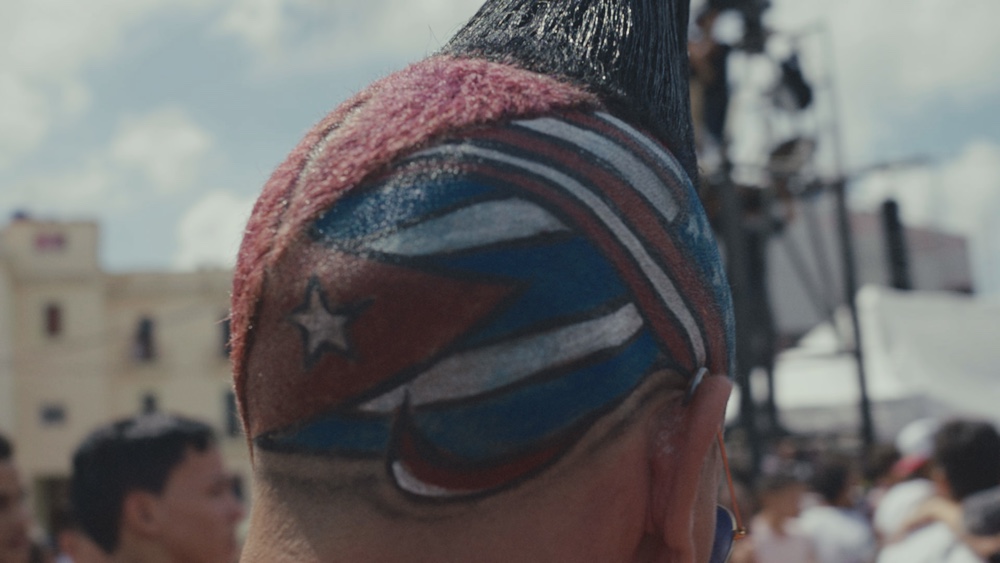 Three weeks after Major Lazer played in Havana, the Rolling Stones followed with a free concert of their own – the first open air concert in Cuba by a British rock band. However, no other western bands have since performed in the country.

“When the Major Lazer concert happened we genuinely thought this was going to be the first of hundreds of these – we assumed it was going to happen all the time,” says Peters. “And then the Stones came and played three weeks later and then that was it. I think the government was like, ‘Wait a minute, this is not what we talked about. This is not a good idea to get half a million people together listening to bombastic electronic music or rock and roll – that’s how you kickstart a revolution.’ I can’t say for sure why there haven’t been any more concerts, but I know Maroon 5 and the Red Hot Chili Peppers had both tried to plan shows there and they pulled the plug. Mark Antony tries to get a gig in Havana every three months and he can’t.”

There is now the fear that Donald Trump will step in and undo all the hard work to restore normal diplomatic relations. The US president has already announced a “full review” of America’s foreign policy position towards Cuba and has threatened to “terminate the deal” if Cuba “is unwilling to make a better deal for the Cuban people, the Cuban/American people and the US as a whole.”

“I’d be lying to you if I said that Trump hasn’t changed the way we watch our movie, or changed the way that certain things in our movie feel,” says Peters. “But he’s just so full of shit that it’s impossible to tell what he will do and what won’t do next.”

Following its Sundance Film Festival premiere in January, Give Me Future is set to play at festivals around the world this year.

Read next: Champeta is the indestructible sound system culture of Afro-Colombia