Mike Hadreas has battled through illness, addiction and a lifetime of homophobic abuse to become the acclaimed orchestral pop force known as Perfume Genius. His bold new album No Shape is his best yet and arrives at a point where LGBTQ rights are dangerously under threat. What inspired it and how did his partner play a role in its creation? The Seattle musician speaks to Miles Bowe.

Perfume Genius’s epic fourth album is full of cathartic moments, but the most powerful comes on closer ‘Alan’, where Mike Hadreas asks his partner of eight years Alan Wyffels a deceptively simple question: “Did you notice? We sleep through the night.” It’s a small thing, but feels like a revelation coming from a songwriter you can imagine has endured his fair share of sleepless nights.

Hadreas started to write music after a spell in rehab in 2005. Struggles with alcohol and drug abuse had left him broke, and he was forced to move back home to Seattle after four years in New York. His first album, 2010’s Learning, captured both the trauma of his addiction and his resilience, and while the subjects of Hadreas’ lyrics are often unclear, it’s easy to imagine his music landing like a life raft for anyone feeling alone or alienated – particularly gay and queer teens.

Ten years on from his tentative first steps into music, Hadreas is a confident songwriter with an obsessive fanbase and a discography that grows brighter and bolder with every release. While 2014’s Too Bright evoked the drama and darkness of Kate Bush and Scott Walker, his new album No Shape shakes off the dread with soaring strings and choruses that hit like fireworks.

No Shape is his most self-assured album to date. On the album’s first single he sings about letting the voices “slip away”, but throughout the LP’s ecstatic highs and sobering lows he also writes about how difficult it can be to let go of the past. On the fittingly named ‘Valley’, he confesses: “I don’t blame you for wanting out / I’m kind of close myself”. Its best moments capture this contrast, exploring how success doesn’t necessarily erase self-doubt.

Speaking with Hadreas is a similar experience: he’s both funny and charming, even when he’s reflecting on the insecurity found in his most triumphant songs.

What do you think about most when you look back at your early work?

On a personal level, I had this idea of what I was capable of. And I think throughout the years I’ve kind of shifted it and broken it down a little, but now I feel like it’s a lot more rapid. Me shaking off some of those limitations I thought I had, whether as a musician or in my daily life, like who I am and what I’m capable of doing and singing. I don’t feel locked down anymore. All [my early] music came from me getting healthy for the first time and that’s sort of realizing you’ve been telling yourself a lie for a long time.

I thought I was always going to be unhealthy, and that was how I was meant to live, that it was all I was good for and capable of. But I had been living that way for a really long time, and even though that’s 10 years, I’ve been around, well, a lot longer than that. So it just keeps changing and shifting what I think I’m all about, what I think the world is all about, my relationships, everything. And that’s a really fun and scary thing.

You wrote a lot of No Shape at home on piano. Was the plan always to then record in LA and blow it up with these bigger sounds?

How did you navigate finding what each song needed?

A lot of it was just instinctual and in-the-moment. I had all the chords and lyrics and the spirit of everything mapped out, but it wasn’t tied down to how that was eventually going to be packaged. I used to be so paranoid about over-doing it before, or I didn’t think my songs were complicated enough to hold up to a lot of instrumentation or embellishment, but I felt like I could let everyone go crazy on the songs and if I needed to edit I could, or I could know when to just leave it all up. Even though the album has simpler, sparer songs, I felt like we paid as much attention and put as much thought and magic into those as far as energy goes.

I think my producer and engineer would think it was less occult-y than I did [laughs]. I’m kind of a hippie about it. That’s why I think we work so well together – they understood the spirit of it and the emotion and they’re just really fucking technically talented people.

It’s interesting you were worried about possibly getting swallowed up by the studio, because the songs here really bow to your vocals. ‘Choir’ especially, with that haunting, whispered sound. How did that come together?

That song is pretty much taken from my demo. The synths and the vocals were recorded at home and I was just so happy with it. I felt like we didn’t need to recreate it in the studio. There are things that happen in the demo that inform the rest of it; generally the mood can be heavy and you want to translate it. But with that song I wanted to keep it just as it was, as far as the vocal.

That sense of everything orbiting your vocals is something that feels really consistent throughout your albums, regardless of how elaborate or sparse they sound.

Yeah, that’s how I keep it real. Because I have so many influences that are all over the place, and Blake, my producer, is the same. We love all different kinds of music and we really didn’t want to limit ourselves, to make this album be one thing.

My voice is so weird that I felt like that could be the common thread? It keeps it from making it feel like we’re trying on different genres or something like that. It is always centered around vocals and they can be nerve-wracking. A lot of the vocals on this album are closer and without any effects, they’re really present. When I’m at home they definitely sound farther away. So that becomes more like an intellectual choice where I know people will like that, but personally I’m uncomfortable with hearing myself so close. I wanted the performance to carry it. 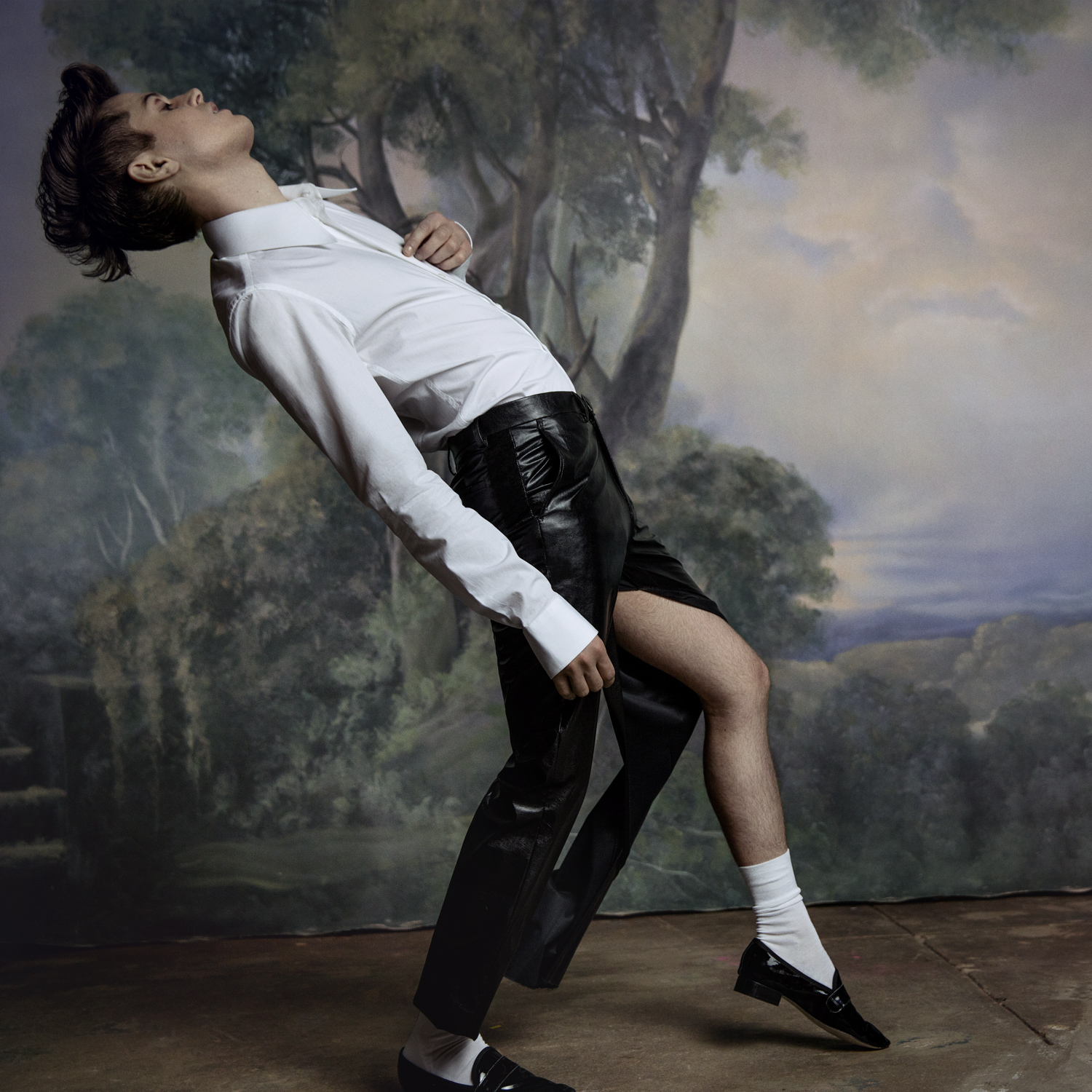 “There’s this current underneath, something dissonant, something unsettling because … well, I guess that’s how I feel most of the time”

There’s a wide emotional range to the album. How do you sequence everything?

I let my boyfriend do it. He’s very obsessive about the tracklist. I can’t listen to my music like that, I completely lose perspective. Even live setlists, I let him do it. I sort of emotionally listen to the list and make sure. He went to school for music, so he listens different than I do sometimes. Then I go and listen and I make sure everything is communicating with each other and sometimes it’s a weird conversation. I didn’t want it to be like “blocks of sad” or “blocks or happy” or “blocks of scary”. I wanted it to all inform each other. I’m always like that. I map it out emotionally. It’s more like a snake than a straight line.

That’s something that’s been in your music since the beginning. The first of your videos I saw was ‘Hood’, which shifts the mood from funny to devasting.

I think it just makes it more honest. If I’m writing about things I haven’t figured out or don’t have a clear moral end, I don’t think I should put that in the song. It felt more real to have the songs have that push and pull in them. A lot of them are seemingly more warm or triumphant, but there’s this current underneath, something dissonant, something unsettling because… well, I guess that’s how I feel most of the time. It’s never fully in one direction. Just taste-wise that’s what ends up sticking with me the longest with movies or music, where it doesn’t really resolve. It can be frustrating or confusing, but you end up thinking about it more.

How did ‘Sides’ come together with Weyes Blood? It’s the first time on an album you’ve worked with another lead vocalist.

I don’t really listen to new music and become obsessed with it, or listen to it over and over, like when I was a teenager, but with her I did that. I was straight-up obsessed with her last album. So just as a fan, I asked her to work with me on that and I’m really happy with how it came together, because I wrote my lyrics and my part and she wrote her melody and her lyrics almost as a response to mine. It wasn’t this scripted duet where everything is mapped out and she just came to guest on it. It was very much our song together in the end. And Blake wrote the music that was underneath her part so it ended up being a conversation with all three of us together. It was about relationships and it was very personal at the start, but it became this fiction we all wrote together.

Your boyfriend Alan has been such an important part of these albums and a very familiar face for anyone who’s seen you live, but it feels like he’s more in the spotlight this time around.

Yeah it’s weird, we go on tour together all this time, but I’m the only one getting my picture taken and stuff. And I know I write the music and sing and everything, but he’s an important part of it.

Was that an exciting or challenging shift? You’re kind of used to it, but for him it’s a little new.

I’m into it, because he is always wondering why I answer questions a certain way. He’ll say, “Well why didn’t you talk about this? That’s what it’s about!” But when you’re on the spot and answering questions, you’re not as thoughtful as you would have hoped sometimes. So for him seeing the other side and getting his picture taken and seeing how awkward or great it can be. It’s the same as interviews – you can feel like you’re freezing up or feel remarkably open. So it’s a little fun seeing him go through it a little bit. But we’ve been together for a long time, I’ve played every single show with him. I’m glad that he’s being heard more and some of the songs are specifically and deliberately about [our relationship], to the point that I name one after him. But at the same time, it’s us together. That’s his song too, it’s not like “Listen to this beautiful song I’ve written for you”, like a gift to him or something. It’s about us.

Read next: Perfume Genius and Christine and the Queens talk gender, shame and subversion