The futuristic reggaeton of Chico Sonido is ready to blow

Monterrey-born producer Jose Rosas, aka Chico Sonido, spotlights Latin dance music on Club Redy, a collection of urgent underground reggaeton that draws from Afro-Latin rhythms, rap and UK funky. Steph Kretowicz talks to Rosas and his team of collaborators about the ambitious project attempting to wrestle back control for underground scenes being mined by pop.

“I want to be the underground that turns its own music into pop,” says Jose Rosas, sitting in a studio in the Los Angeles suburb of Lincoln Heights. Working under the moniker Chico Sonido, Spanish for ‘boy sound,’ he’s the Monterrey-born producer behind Club Redy, a compilation of nine tracks released by Freak City Music on April 14 and representing a Pan-American sound that he calls “futuristic reggaeton”.

Building on the two bar dembow loop at its root, it’s a mix of Spanish-language accents and lingos singing over the lurching, bodily movement of stripped-down riddims. It carries on a tradition of highly referential electronic music, rooted in Jamaican dancehalls and spread across Spain and the Americas, down to a record like Club Redy: a collection of reflexive digital pastiches drawing on the aforementioned Afro-Latin rhythms, as well as US rap and UK funky.

“It’s a little bit like a backbone of a certain style of the Caribbean, tropical music,” says Rosas of the dembow beat he identifies as a major influence on the album and the subculture it draws from. Describing the changing musical motif as being “almost like DNA,” Rosas traces the mutating tresillo across a world map from the early days of Steely & Clevie’s ‘Poco Man Jam’ and Shabba Ranks’ eponymous ‘Dem Bow’ track in 1990.

Then there was Panamian dembow, led by the likes of El General, and Puerto Rico’s early dembow become mainstream reggaeton with one of its biggest hits to date – 2004’s ‘Gasolina’ by Daddy Yankee. “It was party reggae but it was in Spanish, so you could sing along to it,” says Rosas of what writer and historian Wayne Marshall calls the “boom-ch-boom-chick” of dembow drums and snare. “Those were big hits in Mexico, so I guess my influence starts there.”

After finding its way to Mexico and the US, dembow might be where Club Redy begins, but it’s the internet that Rosas and his cohorts have used to develop their sound. “The influences that we liked were united in a kind of web-country where we share similar musical tastes,” writes Tomasa del Real over email, the only one of the five Spanish-speaking vocalists who can reply to my questions in English. “In this context I was influenced by what I heard in my country and what I found on the internet.”

This is what makes the album and its surrounding scene unique but familiar. Club Redy was sometimes recorded remotely and at other times on the fly, when both Chico and one of the featured vocalists happened to be in the same town. Their approach slips in easily with other like-minded young collectives springing up across the networked world – London’s Bala Club, Stockholm’s Staycore, Shanghai’s Genome 6.66 Mbp, Mexico City’s NAAFI, NON Worldwide – making a ‘globalised local’ sound for the world’s diaspora.

“I feel connected, using their music in my DJ sets,” says Mi$$il. And she might not have yet collaborated with any of the artists in the crews mentioned, but she’s aware of them and relates to what they’re doing. “I would call it Latin also, in a way, not just in a Latin American sense but in a Spanish sense,” says Rosas about the other artists, on Club Redy and beyond, that are embedded in an internet culture of connecting, sharing and working. “Everything is mixed up there, there’s a lot of American influence and then I will say I would go to Spain and then kids love this stuff but they also love the American trap stuff, so it’s all like their styles are blending in there too.”

Rosas’ makeshift office is in the back of the Freak City showroom, an art, fashion and party collective that’s made its presence known on Instagram and IRL modeling branded bootlegs – from FedEx shirts and “Chanel Camo Couture”, to “Hood 4 Less” hoodies and custom “Latina Vuitton” three-piece sets. Rosas himself is wearing Roberto Piqueras – a Spanish designer known for applying digital or ‘internet’ aesthetics to clothes – while we talk and he poses for photos in front of diamond mesh fencing and barricade tape. There are collapsed mannequin torsos in one corner, a thrift store-found chair resembling Memphis Group’s post-modern furniture in another. 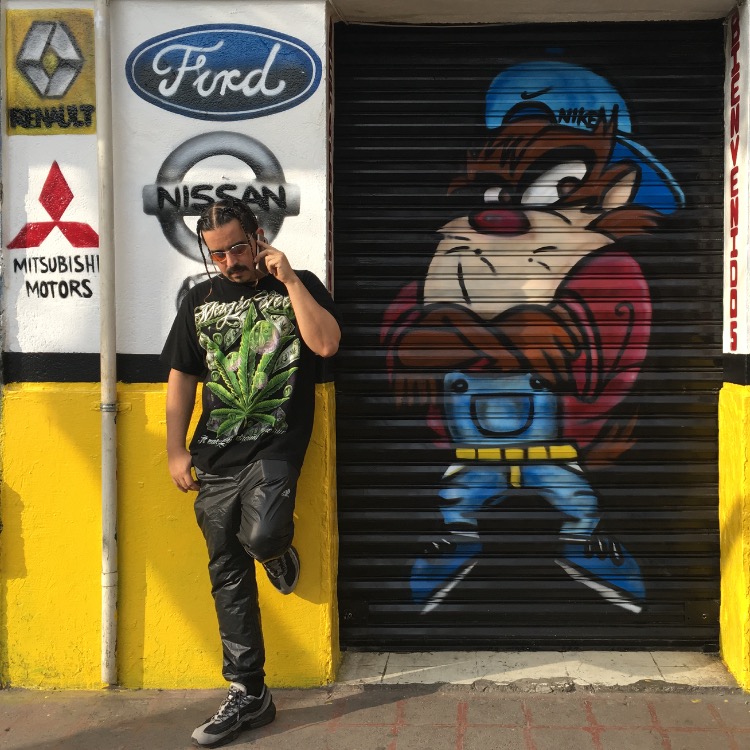 “I don’t remember a time, since MP3s, that I haven’t been downloading free music”Jose Rosas

This is the third location of Freak City, famous for their DIY warehouse parties and hosting the likes of Mykki Blanco, Nguzunguzu, M.I.A., and Lil B. It started on Sunset Boulevard in West Hollywood, then moved to Hollywood before relocating to where we are in Lincoln Heights. “It was crazy,” Chico says about the Freak City “mutant” in one of its earlier incarnations. “The Hollywood space was so big. Big problems come with big spaces so sometimes it’s just too much money and too much energy to do. You kind of need to refocus that energy.” Now that energy is being concentrated on the record label arm of Freak City that Rosas manages, and a shop where there’s an LED-lit toilet bowl flanked by photos of Lil Kim and Malcolm X and a smiley face soap dish.

Outside, in an unassuming, predominantly Latino, east Los Angeles suburb, the Freak City façade is stencilled with the multi-coloured Louis Vuitton Monogram pattern, topped by a wonky hand spray-painted sign in red that reads “LOUIS BODEGA”. Inside, there’s more of the same: racks and racks of unofficial branding fusions, Chanel puffy jackets and FUBU & Versace caps. It carries on a tradition of a kind of pop cultural hijacking that could arguably be applied to the way Club Redy – and the international social media scene developing around it – operates.

“I don’t remember a time, since MP3s, that I haven’t been downloading free music,” laughs Rosas about the subversive culture of sharing that underpins these new, ‘post-genre’ hybrid scenes of the internet music underground. “Let’s say these Russian and Eastern European sites, they always hosted dope music from London, from here, from everywhere, so DJs ‘in the know’ have always been digging on the internet.

That’s where, for example, you can get a lot of music and it evolved into a social media network, where you don’t have to go to the old school pirate sites, you can go where the kids share their tracks. It’s like they don’t even see the point of getting an MP3, or an email, they’re just like, ‘upload it here, this is how we share.’” In a contemporary context, where music is so quickly co-opted by popular culture, staying one step ahead and semi-visible in the complex web of the internet is key to creative vitality. “It’s just a place where I can talk to Lao from NAAFI about those kinds of things, or the kids at Bala Club would know about. It’s a certain common ground that no one else decides. They made their own scene already.”

“If I wasn’t Latina, I think I wouldn’t have made reggaeton”Ms Nina

Another important element of an album like Club Redy, and the collective’s relationship with others similar, is that it represents and draws from a cultural diaspora. Rosas and his five collaborators might have been born or descend from Chile and Argentina, Mexico, Andalusia and Paraguay, but they’re all scattered across a map of the Americas and Spain, including Mexico City, Asunción, Los Angeles, San Francisco, Madrid and Brazil. “It also has a little cultural impact because I’m Mexican but I’m traveling a lot,” says Rosas. “[Ms Nina]’s Argentinian but she lives in Spain, and MI$$IL is from Paraguay but when we shot the music video she was living in Brazil. So there’s a little bit of a common denominator, we’re all kind of immigrants.”

“It could be that coming from a different country and having listened to more things has an influence,” offers Ms Nina. She met Rosas for the first time two years ago where she lives in Madrid, recording vocals with him the following day. “But If I wasn’t Latina, I think I wouldn’t have made reggaeton.”

Jamez Manuel was in the studio while Tomasa del Real was recording ‘Tamos Redy’ with Rosas long-distance, a couple of months later he would be putting down his own vocals for ‘Cotorreo’. Meaning “we are ready” in Spanish, ‘Tamos Ready is a track where an urgent staccato synth melody skips on a deep, guttural bass line-from the front lines of the online international underground, making its intentions clear. “If all these underground sounds are going to the be ripped off by pop,” says Rosas, “I want to be part of the change where we’re in charge.”

Read next: Soichi Terada and Shinichiro Yokota are the Japanese house geniuses finally getting their due