Lockhart, Texas resident Will Patterson won the applause of video game and electronic music fans last month for his analog synth reworking of the soundtrack to The Legend Of Zelda: A Link To The Past. Miles Bowe asks what’s next in his series and if he’d ever give Sega Genesis a chance.

Vintage is always in, but when it comes to synths and video games the demand has never been higher than it is now. Nintendo completely underestimated this with its NES reissue, impossible to find only a few months after its release. It’s also hard to imagine last year’s sci-fi hit Stranger Things being so popular without the Tangerine Dream-indebted synthscapes from S U R V I V E. And not far from where that Austin band reside lives Will Patterson, a musician who has been satisfying both of these cravings with his new project, Switched On SNES.

As you may have guessed from the clever name — a reference to Wendy Carlos’s synthesized take on classical, Switched on Bach — Patterson reimagines Super Nintendo soundtracks with analog synthesizers. Just as Carlos pumped futuristic electronics into typically acoustic compositions, Patterson expands his 16-bit subjects with a more nuanced selection of synths and drum machines. And like its namesake, Switched On SNES isn’t about improving these pieces with “superior” technology, instead offering a new lens to appreciate these timeless compositions.

Patterson is a little surprised by all the attention his recent reimagining of The Legend Of Zelda: A Link To The Past received, but excited to continue the series with Secret Of Mana, Earthbound and more on the way.

What were your first video games? Do you remember an initial title where the music really grabbed you?

I grew up with older brothers, so my first games were for the NES, Super Mario 1 and 3, Excitebike, Zelda. I think the underground world for the first Mario Bros is what first caught my attention, but I really loved all of it. I especially was drawn into the arpeggiated, mystical sounding tracks — the fairy theme was really influential on me. The soundtracks and games that really affected me are Secret of Mana and Earthbound. These soundtracks are extremely underrated and deserve to be heard by anyone who composes or is interested in soundtracks. It’s relatively easy to hear the influences on my personal music — Sleep Good. I love using the warbly synthesizer sounds that are common in Earthbound, and the crystalline synth sounds often found in SNES caves.

What was your introduction to analog synths and when did you get the idea for the series?

For most of my life I was a guitarist, but I was really turned on to analog synths when I became the Moog player in the band Sound Team. I was around 16 when the main member of the band, Bill Baird, showed me the world of tape machines and analog synthesizers. Ever since then I’ve been throwing away all my money on this sort of gear. Even though it constantly breaks, I can’t get anything that sounds like it on a computer. The slight fluctuations in tape and analog gear really make it feel more real to me.

I randomly had the idea a couple months ago, so I decided to try out a full soundtrack. The primary influence is Tomita’s Debussy synthesizer album Snowflakes are Dancing as well as Wendy Carlos’ Switched on Bach. I had no idea it would be picked up and heard by so many people and now that I have some listeners, I’m really excited to continue with the series. 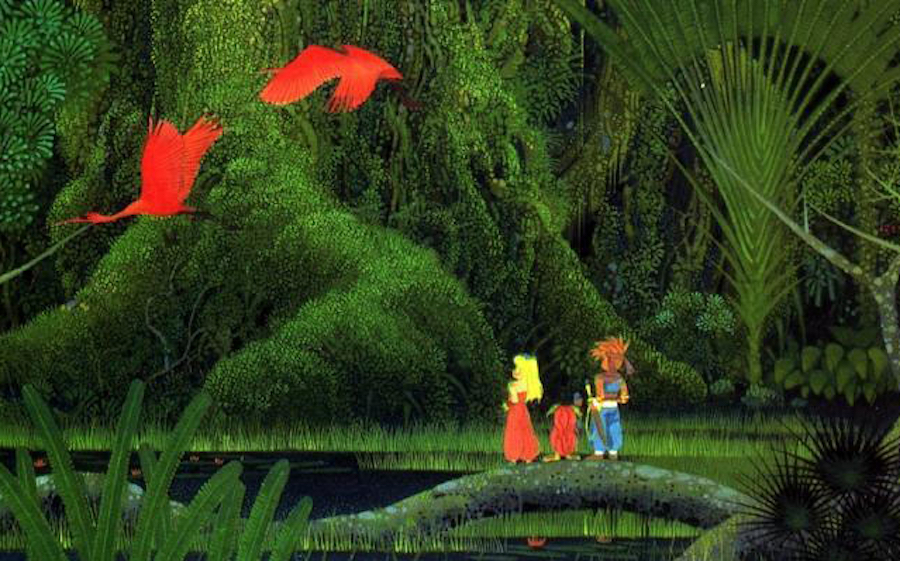 “Secret of Mana is my first or second favorite soundtrack and is the one I’m the most excited about.”

What are your favorite synths and drum machines, and what did you use for the album?

My favorite synths are the Moog Model D and Yamaha CS-80, although I don’t have either since they’re so expensive. I primarily used a Moog Concertmate, Sequential Circuits Pro One and a Korg Monologue. I’ll be using an old Univox, TR-808 and Acetone drum machine for the next releases as well.

Why did you want to start with A Link To The Past and what drew you to Secret of Mana next? Are there others you’re excited about?

I started with A Link to the Past because it’s one of the main staples and I feel like most players are familiar with it. It also has so many tracks that are conducive to the style I’m creating. Secret of Mana is my first or second favorite soundtrack and is one I’m most excited about. It’s one the most cinematic soundtracks out of all of the SNES games and I think it will translate to synthesizers really well. It may be the most nostalgic set of game songs I know. The same goes for Earthbound – I just found out Mac DeMarco shares a love for the game after noticing him projecting it at his shows.

You mention on your Bandcamp page that you’ve set up royalty payments to Nintendo and Zelda composer Koji Kondo. Was that difficult?

I thought it was going to be difficult, but it was relatively easy. However, it is very expensive and I am just now done covering the initial licensing costs and making money to pay for the next releases’s fees. I’m also creating a limited run of cassettes for each soundtrack and will release a large cassette booklet with all of the releases in the end. The Zelda cassette comes in metallic gold and should be ready in May, when I put out the next part of the series.

You live just outside of Austin. S U R V I V E’s success with Stranger Things last year showed there’s a huge popular interest in analog synth music. Is there a big scene for synth music in that area?

There’s a synth shop that some of those guys run in Austin, called Switched On. I actually see those guys in there occasionally and am definitely into what they are doing. The analog synth scene here in town is pretty big, although I don’t know too many synth bands like S U R V I V E.

Finally, as a Sega kid, I have to ask: would you ever consider taking on any Genesis games or would that be a betrayal to the big N?

Haha, I’m totally down to branch out.