Wet Sounds: New Atlantis is ushering in the new wave of new age

Starting life as an “ambient social” in south London, Deadboy and India Jordan’s New Atlantis is now a fully-fledged record label, with its first release highlighting a diverse roster of artists experimenting with oft-maligned new age tropes. John Twells talks to the duo about the genesis of New Atlantis, and what we can expect in the future.

“People aren’t aware of the effects of all the bad noise: clubs with terrible soundsystems, mid-range noise on the radio, living in the city.”

Allen Wooton, better known as Deadboy, is explaining the philosophy behind New Atlantis, an ambient “social” that’s been running since June 2015 and has now grown into a record label. “Doing something like New Atlantis,” he continues, “it was an opportunity to have something where it’s not about blasting noise at people through a fucking shitty soundsystem, standing in a dark room staring at a DJ. Let’s sit down and put some nice music on and have a cup of green tea.”

The night stemmed from a conversation with Local Action boss (and ex-FACT editor-in-chief) Tom Lea; Wooton was surprised to discover that he wasn’t the only person nursing an addiction to cult new age blog Sounds of the Dawn. “He said to me that Yamaneko had been telling him about the same stuff the day before, so after I did the record with Tom, we did an ambient Boiler Room and it was really fun.” 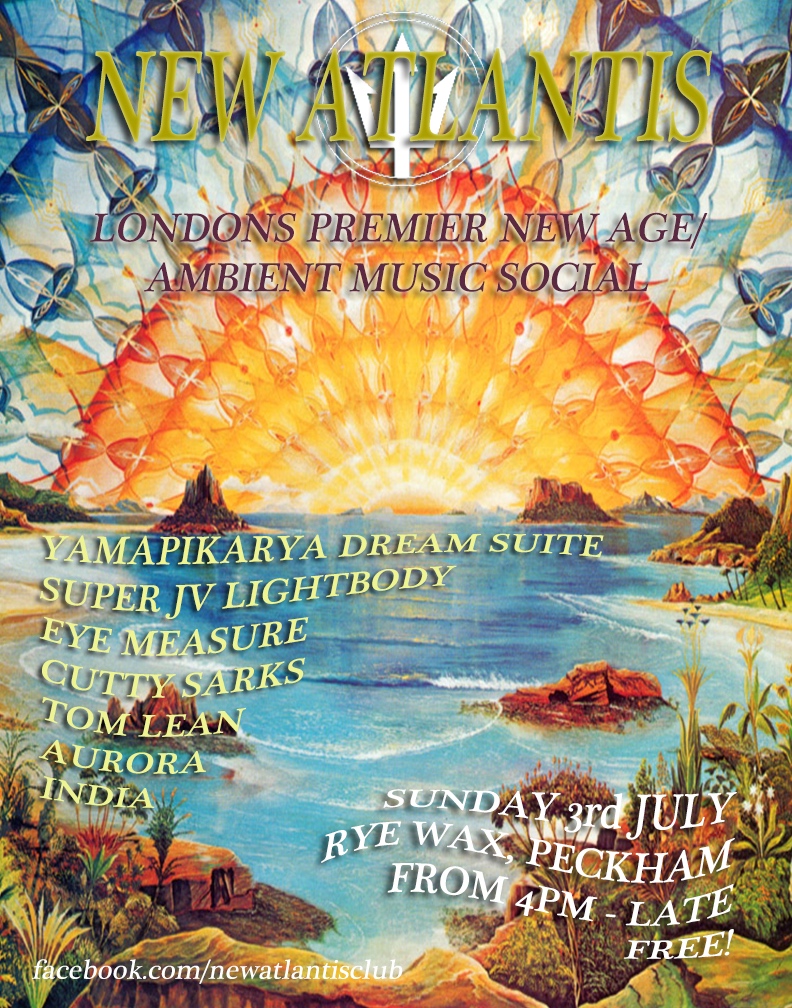 The eccentric one-off evolved into a regular Sunday session at Peckham’s Rye Wax – a record shop, cafe, bar and club deep in south London – and fittingly takes its name from a new age album by Frank Perry, an album that Wooton discovered on Sounds of the Dawn. And while the social started slowly, with only a handful of people at each event, New Atlantis now fills the room every month. No mean feat for a show that starts at 4:00PM and doesn’t even list the performers, instead choosing to give artists eccentric new age pseudonyms.

“We made sure that everything stayed more like a cafe-style thing than a club,” Wooton assures. “Everyone got the vibe immediately and just came and hung out rather than expecting to come and dance. Also, none of us put our real DJ names on the flyers – nobody came expecting to hear Deadboy or Yamaneko.”

Wooton runs New Atlantis with India Jordan, who helms an enigmatic monthly show on London’s Radar Radio. “I didn’t actually go to the first one,” Jordan tells me. “The radio show that I run on Radar is all a bit spacey and ambient, so I went to the second or third one, we got chatting and then [Alan] said, ‘you should come and play’.” Jordan adapted the format of her themed radio show, and the first set she played focused on the deep sea. “I really love whales,” she laughs. “So I got some visuals together and played a whale set with whales in the background and I think Alan liked it. He said, ‘do you want to play again?’ And I just played every month after that.” 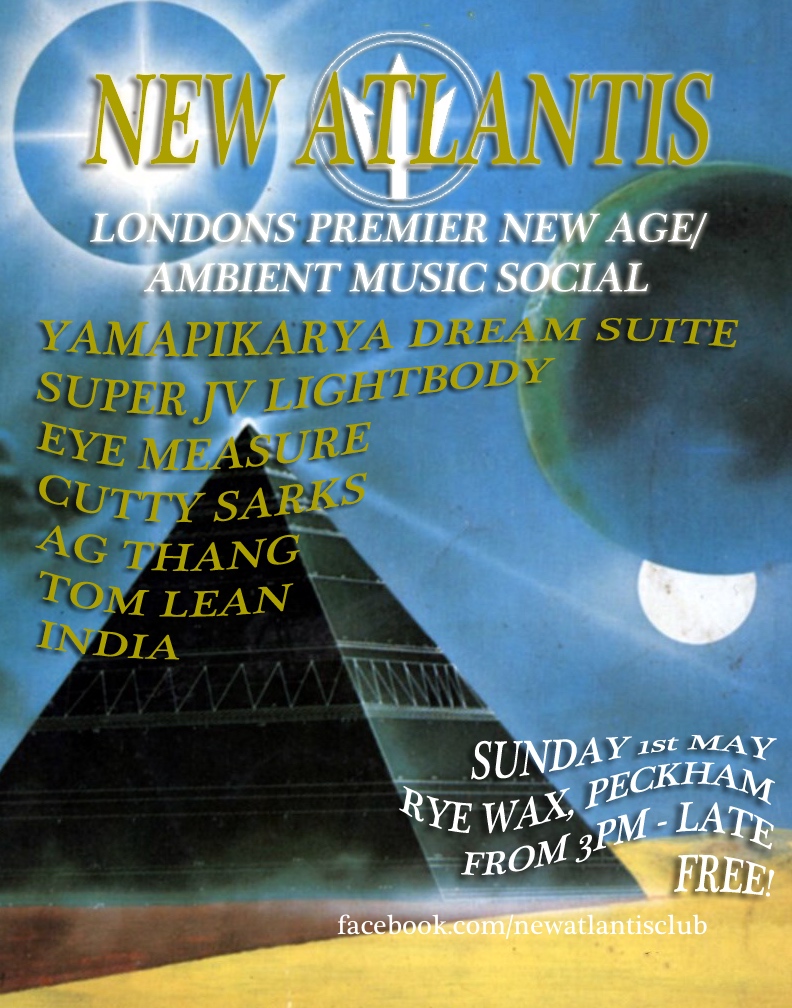 “Sometimes, the only time I get to see my friends is if they come to New Atlantis”India Jordan

It was fortuitous for Wooton that Jordan was so eager to join in – last year he moved from London to Montreal, leaving Jordan to take the reigns. “Alan left in May, and I guess ‘cause I’d been so much, I was really keen to take over. And I took it from there.”

This wasn’t the first time Jordan had been involved in promoting. She had worked on a number of “ticketed, large-scale events” with bigger artists when she lived in Hull, but on moving to London she had no interest in taking on the level of risk and anxiety that surrounds that sort of promotion. “[New Atlantis] is the perfect opposite to that: no entry fee, you don’t even know who’s going to play on the day. It’s just very chill. It should reflect the music that it actually is.”

I wonder what music that is, exactly. “We have a loose set of parameters around the night,” Wooton explains. “It’s not all new age and ambient. Like, Alex, who plays as AG, he plays a lot of spiritual jazz, so it’s pretty wide parameters.” And this set of parameters is carrying to the record label, which kicks off this week with New Atlantis Volume 1, a 14-track compilation featuring contributions from the night’s regulars: Yamaneko, Throwing Shade, JQ and of course, Jordan and Wooton.

It’s a project that’s been gestating for some time: “Alan said, ‘you should send over a tune if you have it, I might wanna make a tape one day.’ And that was over a year and a half ago now,” Jordan tells me. “Nothing really happened, everyone forgot about it really. Once Alan moved to Montreal, more and more people were making ambient music, but not really as their main thing. But everyone kept on saying, ‘we needed a platform for doing something with this stuff.’”

And what better platform than an existing night that has already been a home for so much of the material and its influences. “The people that play at the night make music, but don’t necessarily have an output for releasing stuff like some of us do,” says Wooton. “So it just made sense really – we had a bunch of friends who were making music and we already had this night so it just made sense to start releasing some of it, and a compilation seemed like the obvious first step.”

It was important for the duo for the label to reflect the social aspect of New Atlantis. Since it’s a relaxed event, rather than a frantic club night, the regulars have become a community. “Sometimes, the only time I get to see my friends in a month is if they come down to New Atlantis,” Jordan says. “The whole compilation is created by the people who are on it. So it’s mastered by Alex Sawdon who’s one half of Pyramid Scheme. And the artwork is done by an artist called Melancholy whose artist name is pre-emptress, who is also on the compilation. Everyone who’s contributed to the compilation is involved in the music somehow or involved in the night.” 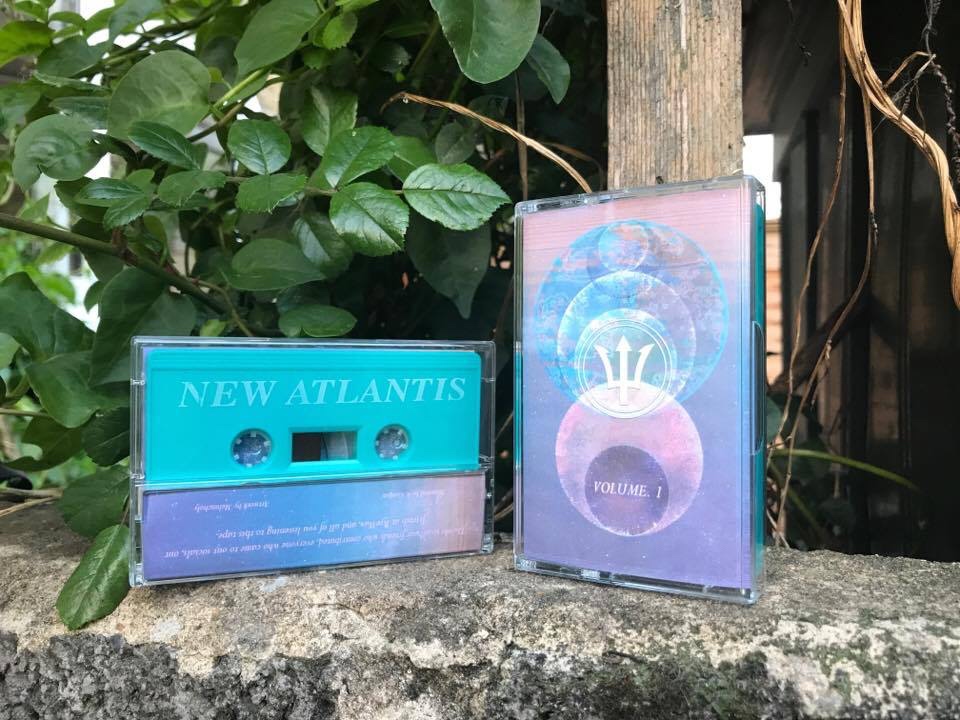 After the compilation, Jordan and Wooton have no plans to stop, either. “I think eventually everybody who’s on the compilation will have a full release,” says Wooton, ambitiously. “We’ve have talked about doing some record pressings too,” Jordan adds. “‘Cause of Rye Wax, that’s a really great place to sell all the stuff.” They’ve even been talking to a brand new pressing plant in Peckham, to keep things as local as they possibly can.

As for the night itself, it’s about to go global. “I’m doing an event here soon, so it’s going to be New Atlantis International,” Wooton says excitedly. “Soda Lite, who’s on the compilation, he’s wanting to start one in Melbourne as well,” mentions Jordan. “Not like a New Atlantis one, but an ambient social. So we’ve been chatting about what the best venues would be, that sort of thing. It’s good that there are people on the compilation who are starting up some similar things around the world.”

It’s an admirable goal; I know first hand how hard it can be to operate non-traditional events in commercial spaces. New Atlantis provides an outlet that prioritizes community and sound, and that’s worth pushing against the grain for. “We’re working in a paradigm that’s set by club and bar culture,” concludes Wooton. “We just want to make somewhere where you can go into a space and you feel good.”

New Atlantis Volume 1 is out now on cassette and digital.

Read next: The new wave of new age – How music’s most maligned genre finally became cool