Native Instruments’ latest tool, Thrill, taps into the film and video game soundtrack market, offering an all-in-one tool for creating everything from emotive orchestral sweeps to chilling synth drones. But is the new instrument as easy to create a professional effect as NI claims, and does it have the potential for use outside of Hollywood? Scott Wilson reviews NI’s unique new instrument.

Thrill is something of a departure for Native Instruments. Rather than offering synths and drum samples aimed at techno, pop and hip-hop producers, the German company’s latest instrument is a Kontakt toolbox for film, TV and video game soundtrack composers that makes it easy to craft cinematic atmospheres with orchestral and synthetic sounds. Load a preset, and using a simple X/Y control you can ratchet up the tension (or ‘Thrill Factor’) with one sweep of the trackpad. Like a lot of NI’s software, you can get astonishingly professional results with very little effort.

It’s an unexpected move from Native Instruments, but not a surprising one: while musical earnings continue to flatline, movie soundtrack work still offers a potentially lucrative revenue stream. However, cinematic scores – even those at the more experimental end of the spectrum – have their own set of conventions, and tense strings, brooding drones and apocalyptic choral sections are very difficult to replicate if you’re inexperienced. Thrill’s easy to use interface means that anyone can have a go at creating their own Hollywood masterwork without too much difficulty.

That’s not to say Thrill isn’t a deep instrument. The gigantic 30GB sound library is taken from 963 source sounds and covers both traditional orchestral sounds and “hybrid” sounds based on custom-built instruments, synth drones and circuits. In fact, it’s so big, that anyone using it on a laptop is likely to have a hard time installing it; while the final install size is only 29GB, you’ll need 122GB of free space for the process – a considerable amount for anyone on a small SSD drive. It seems slightly at odds with the affordable, accessible nature of the software itself.

In terms of design though, Thrill is hard to fault. Presets can be narrowed down by category (dynamic, type of instrument, mood), or you can build your own. Thrill has two preset types: atmospheres and clusters, both of made up of multiple instruments in one patch. Broadly speaking, atmospheres are the less imposing of the two types, and are used for setting a scene – the appearance of a ghost, entering a cavern, establishing an alien planet. Clusters seem better suited to melodic elements, be that giant orchestral sweeps or more subtle themes. 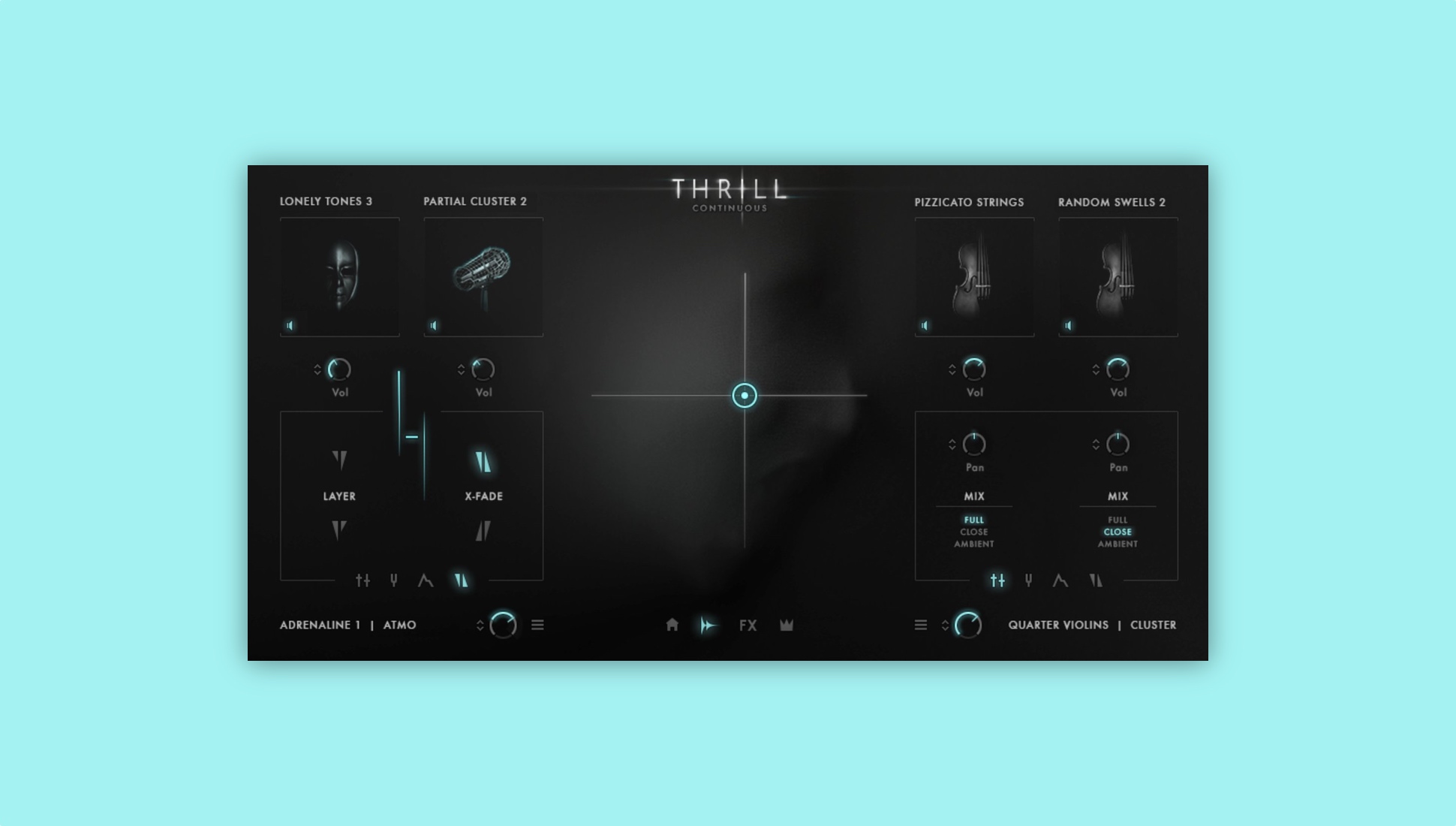 However, it’s the ability to blend traditional orchestral elements with synthetic sounds that sets Thrill apart from Kontakt’s other orchestral expansions. If you want to emulate the kind of mainstream Hollywood sounds you’d typically hear in a Hans Zimmer score, then Thrill can do that. But if you want to try and make something a little more unusual – like, for example, the music of Jóhann Jóhannsson’s Arrival soundtrack – then you can add metallic and ‘circuit’ sounds together with vocal recordings to create very strange backdrops.

Once you’ve selected the instruments, it’s possible to use the modulation effects and blend modes to get the patches doing even more unusual things. For example, if the sound is in the atmosphere category, you can modify how the two sound sources blend with a crossfader. If it’s a cluster sound, then you can change the number of voices in the patch, which will affect the overall intensity. 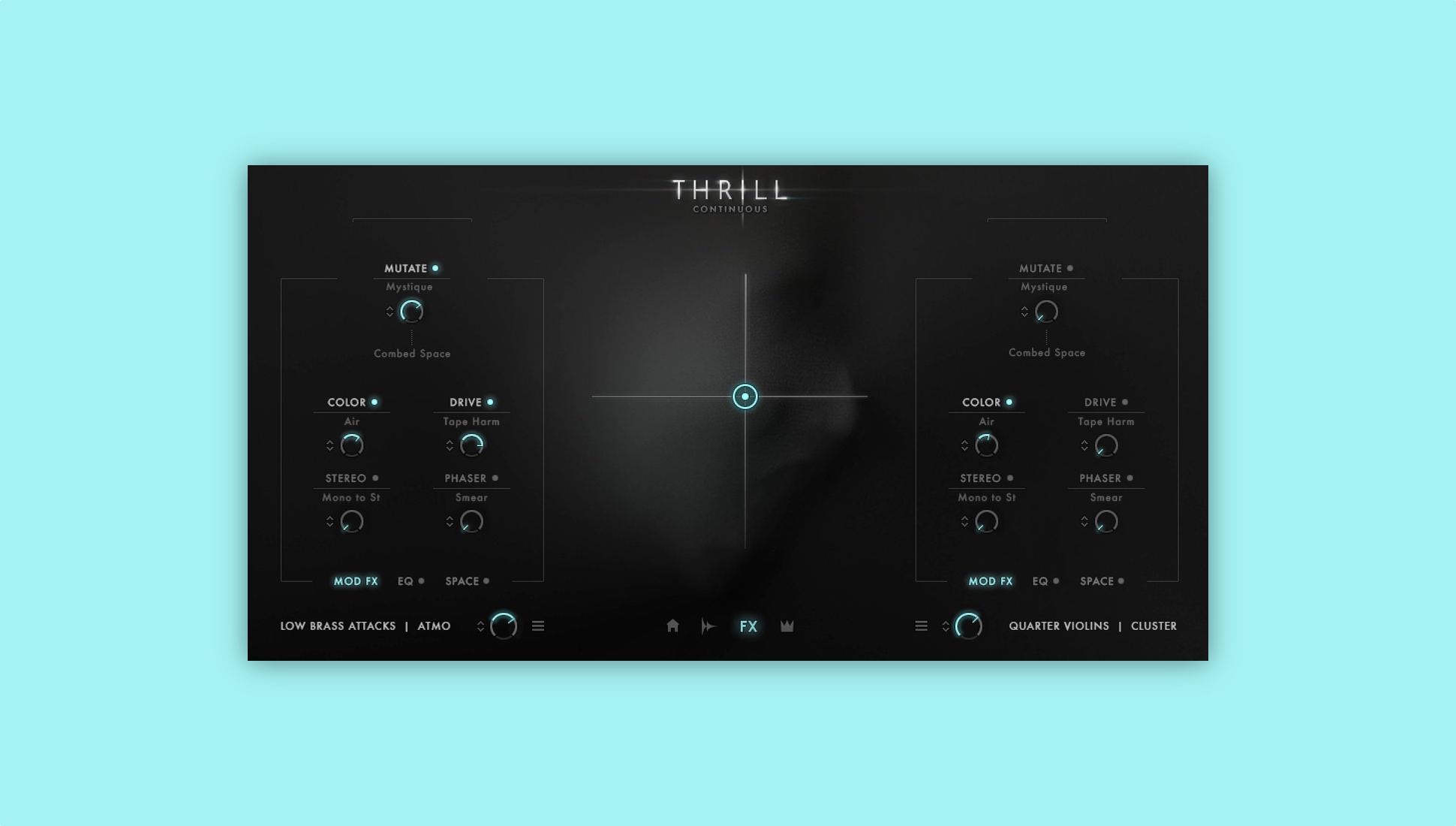 However, if you’re hoping that Thrill will be the only thing you’ll ever need to makes film scores then you might be disappointed. Compared to a Kontakt instrument like Dark Matter, whose organic tones are suited to a more general style of movie composition, Thrill is primarily an instrument aimed at creating tension. That means you won’t be able to make the kind of big, blockbuster-friendly orchestral themes you’d get from a big John Williams score. Instead, it’s more suited to crafting Hitchcock-style suspense and spine-chilling horror-style sounds.

If you’re hoping that Thrill might also have more general musical applications, again, it’s somewhat limited. Anyone making music for installations will be able to make use of some of the more abstract atmospheres, but for the most part, increasing the intensity makes the output a little too in-your-face for anything other than a specific cinematic style. The tool itself is powerful enough to make the sound of a whole ensemble, but the fact that the interface is designed to build suspense is a limitation if you want to convey other moods.

In terms of what it sets out to do though, Thrill is a success; it gives you the sounds to put people on the edge of their seat with very little effort. If you’re working in the horror or thriller genres and you need to score a quick trailer or preview what a scene feels like with different ensembles, Thrill could become a go-to tool. If you’re an amateur musician looking to get into composing music for movies though, don’t assume it’s a shortcut to success. If you want to break into Hollywood, you might be better off developing your own style with the tools you’ve got.