Dato’s colorful new synth is aimed at kids of all ages and designed for use by two people at once, but is it just a Fisher-Price toy in an expensive case? Scott Wilson finds out if the Dato DUO should be on your Christmas list this year.

If there’s one thing that Korg got right with its much-loved Volca instruments, it’s that people want to play with synths as much as they want to play them. For every person that bought one to make music with, there’s no doubt another who’s picked one up because they wanted a musical toy; synthesizers appeal to the big kid in all of us because they’re covered in buttons and react to input in a way that encourages exploration and experimentation. Even if you can’t play keys, you’ll get a satisfying noise out of a synth fairly easily.

That feeling of child-like curiosity is what Dutch startup Dato (founded by two parents) is trying to harness with its new DUO synth. It looks like a Fisher-Price toy for toddlers, but the company says it’s aimed at both kids and adults “aged 3 to 99 and up”, with big, squishy rubber buttons and cute doodles to represent functions like sequencer speed (a tortoise and a hare) and delay (a train tunnel). However, it has one key feature that sets it completely apart from any other synthesizer: it’s designed to be used by two people at once.

The Dato DUO has two angled sides, each of which contains a different set of controls. The design means that you have to sit opposite the other person when you’re playing it, which is a weird, disconcerting experience (especially if you’re used to making music in a studio alone). I played the DUO with a few friends who didn’t have any experience of using synths, and it was the same kind of experience you get playing Mario Kart or Street Fighter 2 with someone who doesn’t play video games – unbalanced and a little bit chaotic, but great fun. 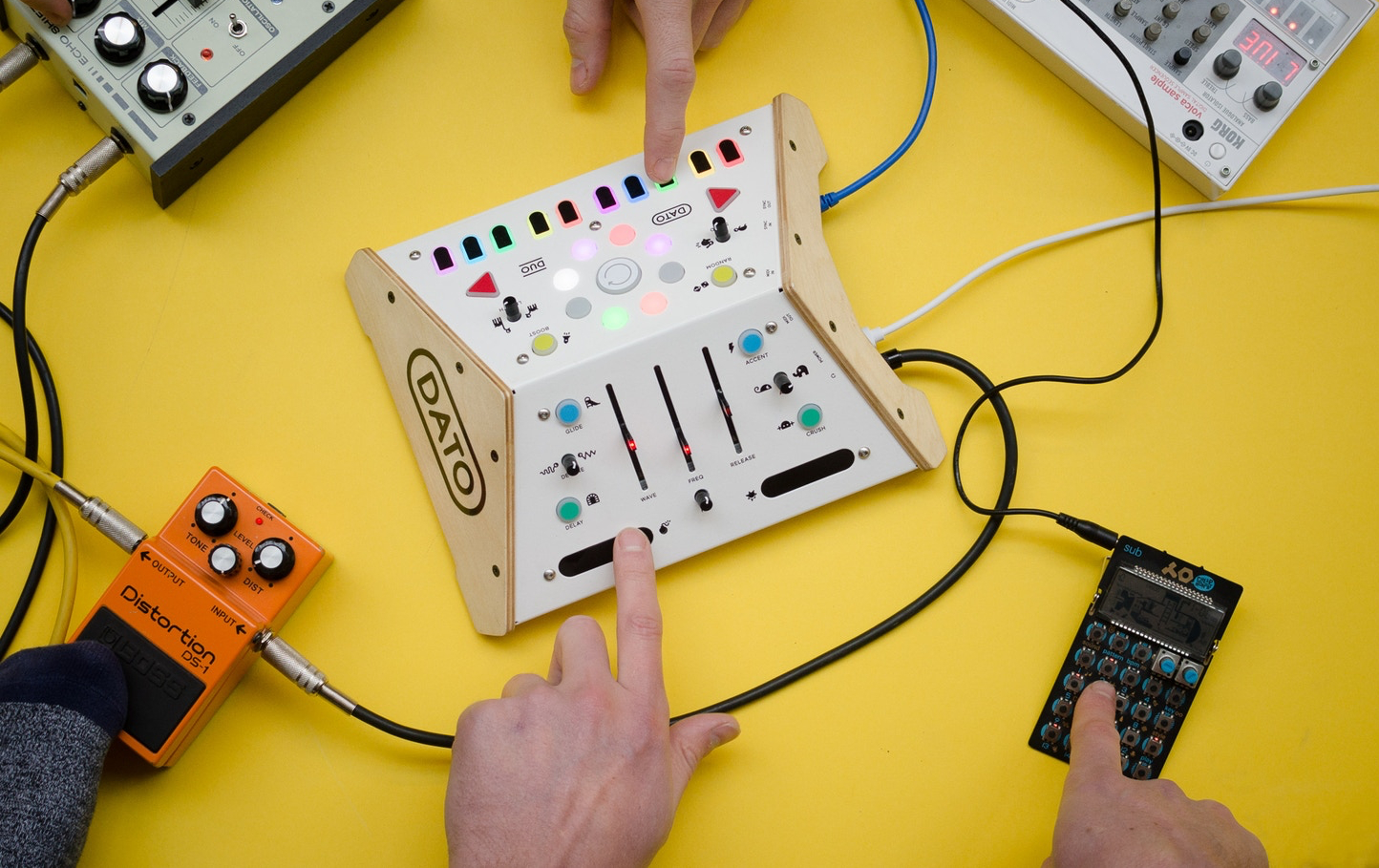 Broadly speaking, the two halves focus on different aspects of the synth design process: one is for playing and sequencing notes and the other is for shaping the sound and adding effects. The ‘note’ side has a traditional chromatic keyboard and a circular eight-note sequencer with a big play button in the middle – press play, hit a key as the sequencer cycles round and it’ll save the note. On the ‘synth’ side are controls for waveform, frequency and release alongside resonance dial, glide, accent and delay controls and a bit crusher for added bite.

Inside the DUO is a very simple mono synth. Dato describes it as “gritty”, but it sounds a bit more cartoonish to my ears; it’s decent for what it is, but it definitely isn’t as versatile a synth engine as it could be. However, the synth modeling controls are surprisingly deep, the wave shaper allows for some nice sonic variation and the delay is also excellent. It’ll sound a lot better if you’re not using the DUO’s built-in speaker, which is as tinny as you’d expect and doesn’t make the synth sound any more interesting.

If you’re wondering which of the two sides of the DUO is the most fun (likely to be the cause of most arguments), it’s the synth-shaping half: tweaking the sound is infinitely more fun than being in charge of the sequencer, though the sequencer’s random and boost buttons are great for adding variation. It’s possible to set the sequencer running and just use this half of the synth on your own, but it feels a little sad to be playing a two-player synth solo. If you want to adjust the cutoff on sequenced notes, just buy yourself a synth and a sequencer. 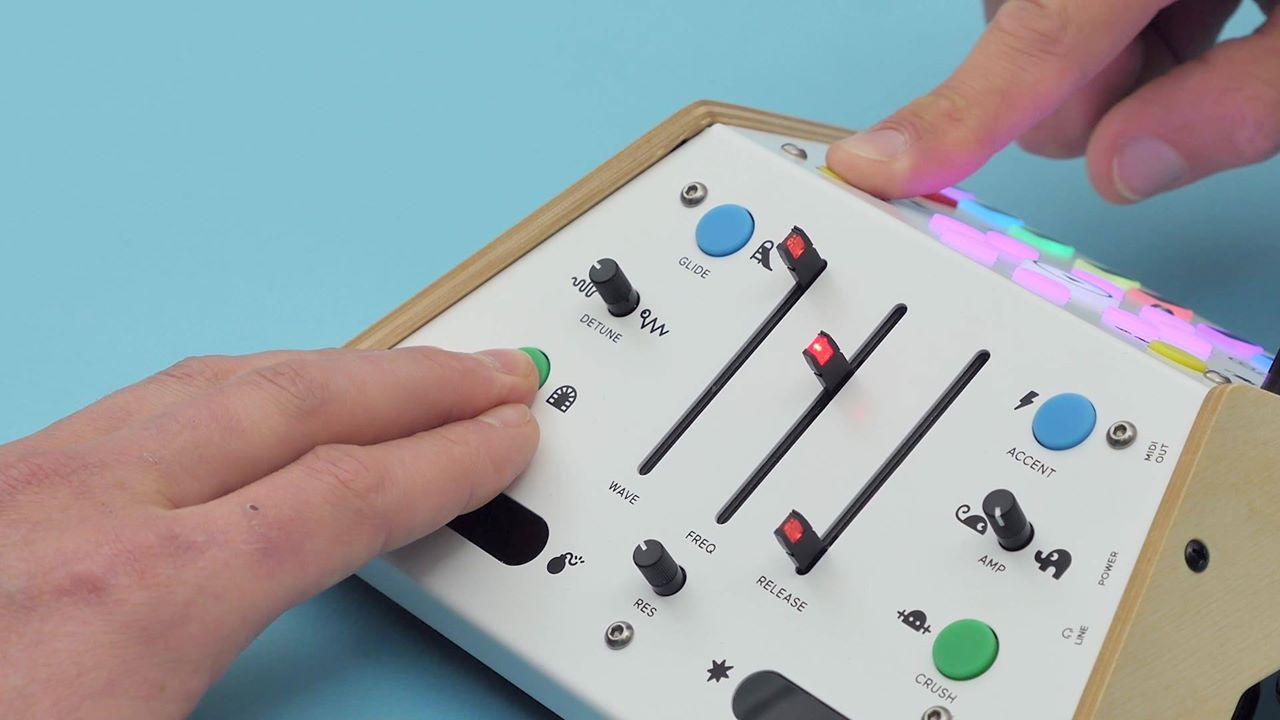 While there’s also a pair of simple drum pads, Dato also wants the DUO to be played as part of a wider setup. As well as MIDI in and out, there’s sync in an out that allow you to connect smaller synths such as Korg Volcas or Teenage Engineering’s Pocket Operators; there’s also a minijack output for audio. However, these features are probably less intended for recording a finished product and more for jamming with any gear you might already have around the house.

If you’ve got a drum machine knocking around, you’ll definitely want to use it. The built-in drum pads can’t be sequenced, and they’re located on the side with the synth design controls. They would have made a lot more sense on the side with the sequencer, where there’s not a huge amount to do with your hands once you’ve got a nice melody looping away. They’re also quite small and not great for big hands, but kids will probably love hitting them and making simple beats.

Poring over the DUO’s functions and synth quality is probably missing the point though. Ultimately, the DUO is an instrument for learning and having fun, not making a polished end product. My partner (who has no experience of synthesis) loved it because it wasn’t intimidating to pick up and play, and kids are going to love it even more. However, at €329 it’s priced way outside of the toy category, something that’s going to put off all but the most wealthy of parents from buying one.

The high price is a crying shame, because you’d need to have a heart of stone not to be won over by the DUO: it looks incredible, the concept and execution are fantastic, and its potential as a tool for teaching basic synthesis to young children is huge. At the current price though, it’ll mainly be synth collectors that get to have all the fun.