The spotlight might be on Native Instruments’ new Maschine MK3, but the company has also updated its Komplete Kontrol keyboards with a host of new features, including two color screens. But are those screens enough to help keep our eyes off the laptop, or are they a distraction in themselves? Scott Wilson reviews the Komplete Kontrol MK2.

Spare a thought for the humble MIDI keyboard. Too big for most bedroom studios, it’s been pushed aside in recent years by grid-based controllers that let you play drums, sequence melodies and play chords on one space-saving box. But there are still plenty of people out there who use MIDI keyboards: there’s something reliable about working your way up and down the keys that will never be bettered by an 8 x 8 grid of rubber pads.

Another reason why controllers like the Ableton Push and Native Instruments’ Maschine have slowly started to replace MIDI keyboard in the studio is visual feedback. Whether it’s the Push’s sequencer mode or Maschine Studio’s (and new Maschine MK3’s) dual screens for displaying a graphical representation of the software’s mixer, these controllers make it easier to see what’s going on in the software without having to look at your computer. Like a computer, they’ve got screens too, but they’re focused on one task – and you can’t browse the internet or check your emails with them.

Native Instruments’ new Komplete Kontrol MK2 (available in $599 49-key and $699 61-key models) feels like an attempt to reframe the MIDI keyboard as an all-in-one production station like the Push or Maschine. There have been plenty of all-in-one MIDI keyboards in the past from Novation, Akai and Arturia allowing you to control your DAW, sketch out beats and tweak parameters, but none of them have had the two color screens (Akai’s Advance range has only a single screen) sitting at the heart of NI’s new keyboard, which the company hopes will keep your attention on making music and not on Facebook or Twitter. 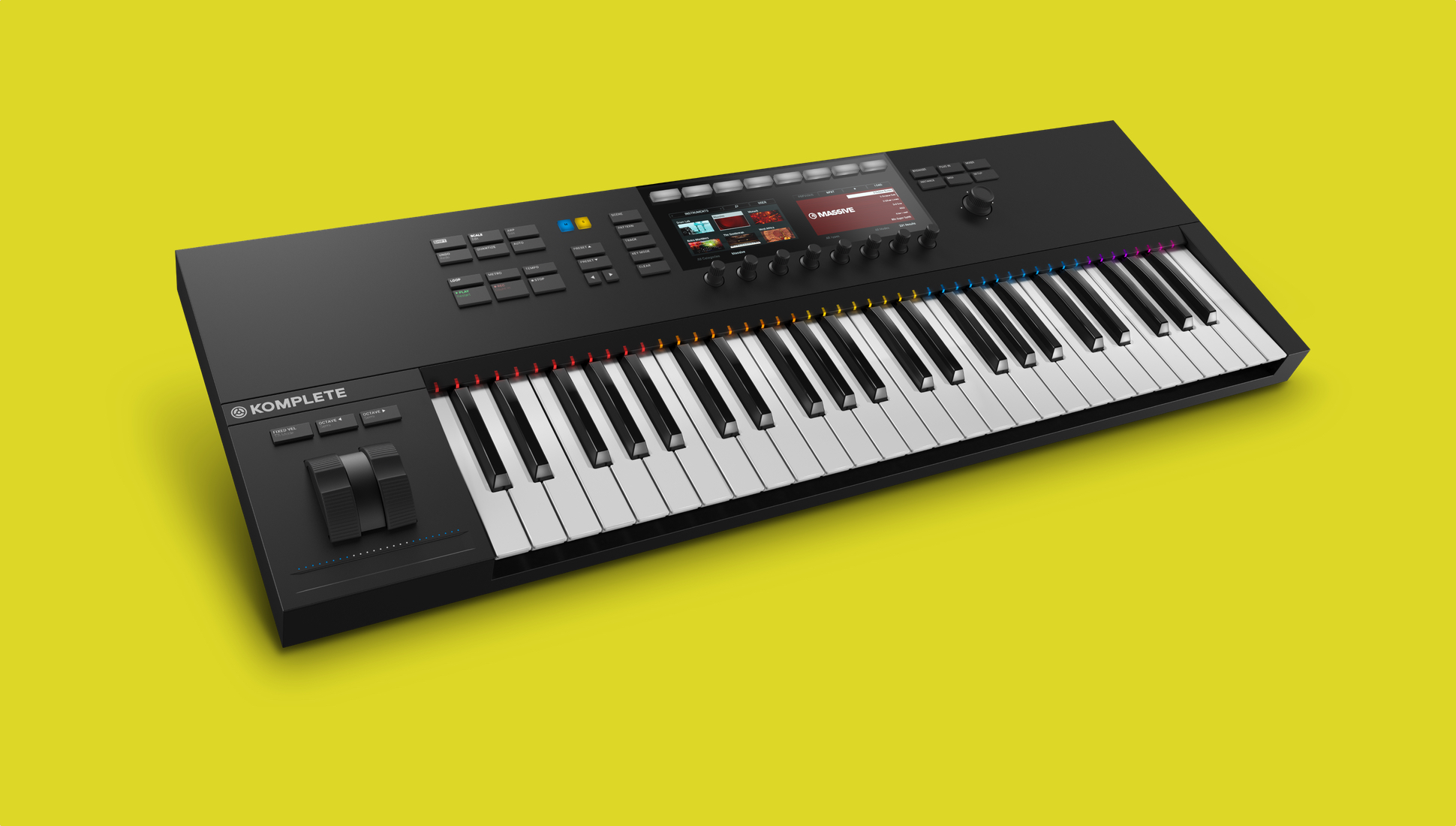 Apart from these screens, there’s not much between the MK2 and its three-year-old predecessor besides the introduction of proper pitch and mod wheels to replace the touch strips, which were the weakest part of the original; a touch strip for modulation still exists, but it’s underneath the wheels in a much easier to use horizontal position. There’s also the same new four-dimensional push encoder found on the Maschine MK3, which can be turned or used as a joystick-like substitute for directional buttons.

For the most part, the MK2 does everything the original does in terms of integrating seamlessly with Native Instruments’ Komplete suite of software instruments (a limited selection is included with every keyboard). You can still browse for presets and tweak pre-mapped parameters with the eight function knobs (which are now touch-sensitive), but you can now do it in color. Browsing with the new screens is great: almost a little too great in fact, if you’re like me and have a tendency to lose hours scrolling through presets. It’s still an amazing tool if you use Komplete or NKS-compatible software like Output’s Substance or Arturia’s Mini V.

The Light Guide, which makes it easy for anyone to play melodies and chords in the correct scale without musical training, also returns. Functionally it’s sharper and brighter than before, but it’s also a lot more obvious when the keyboard’s turned off. However, it’s still the best reason to choose a Komplete Kontrol over any other MIDI keyboard: those who have music training or like to go off-piste might find it too limiting to established conventions and scales, but for the rest of us, it’s nothing short of revolutionary. 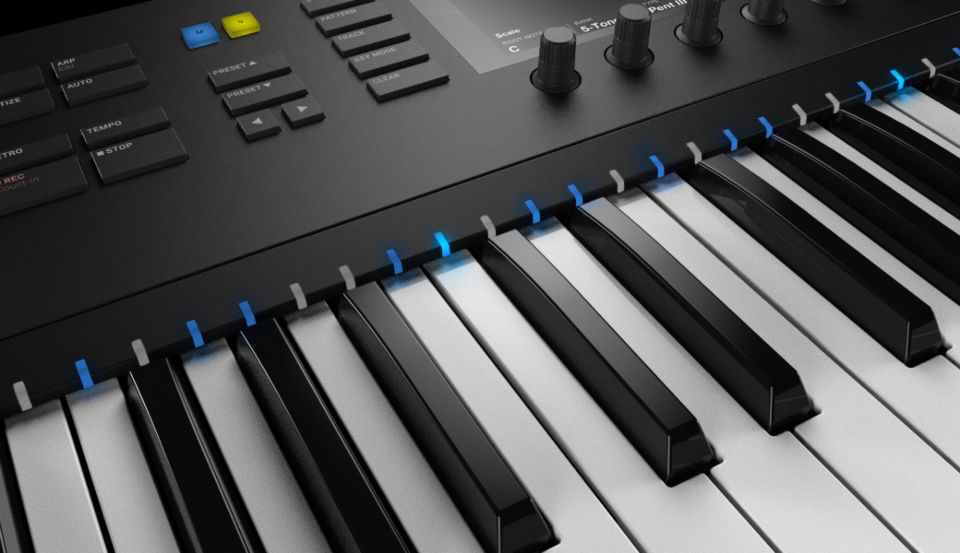 The real changes to the MK2 are in the way it integrates with both third-party DAWs and NI’s Maschine software. Ableton Live, Logic and GarageBand are the first to be fully supported at launch, with Cubase and Nuendo following later this year. It was possible to do this with the original model, but the dual screens add a new dimension of integration. Once you’ve followed the setup process you can press the “mixer” button on the right to bring up a graphical representation of your DAW’s mixer tracks, which you can control with the knobs underneath.

The push encoder is another key part of this integration, allowing you to scrub through your track by turning the knob or highlighting tracks or clips. In Ableton Live, for example, you can use it to trigger whole scenes. In practice, it’s a little more awkward than it sounds; the encoder isn’t quite loose enough for quick movements, and a lot of the time I felt like using a mouse would have been easier. If you have a Push, there’s no reason you’d use this function to try and control the cursor on Live.

The other DAW transport controls for recording, looping and quantizing work just as they should, but there’s one addition that’s really useful: an “auto” button that lets you record automation in supported hosts. You could of course record automation on the previous Komplete Kontrol, but being able to trigger a button that activates or deactivates this function so you can concentrate on getting the notes down first and then adding your tweaks makes a big difference. 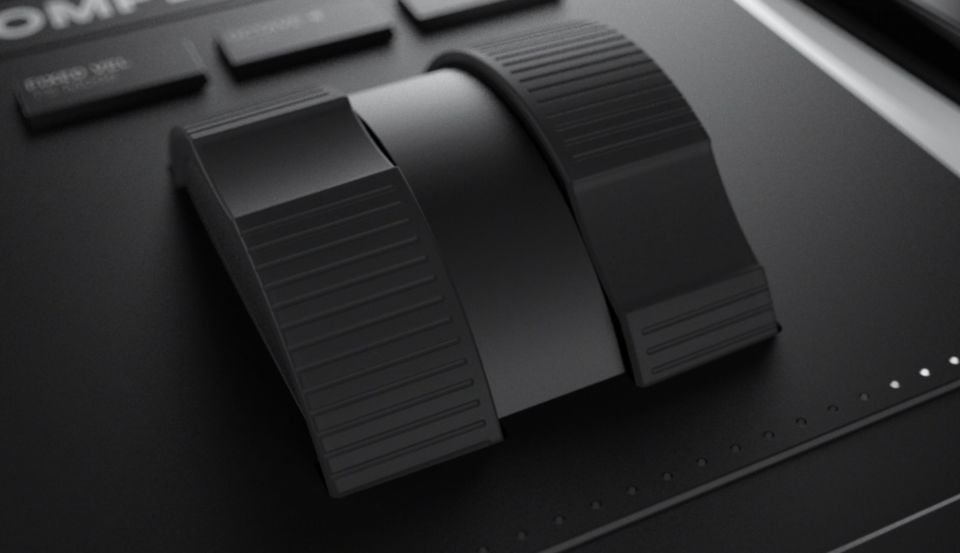 If you’re a Maschine owner though, you’ll notice that the DAW integration is quite basic compared to the way the keyboard works with NI’s beat-making software. Dedicated buttons on the left allow you to access Maschine functions like scenes and patterns, while the buttons along the top let you play clips in the new Ideas View. There’s also a “key mode” button that maps all the drums in a kit to a 16-key section of the keyboard. It’s a clever way of getting around the keyboard’s lack of drum pads, and some people will probably prefer it to making beats with Maschine.

Together, these functions are a really quick way to build up tracks on the fly without having to use the Maschine controller. As long as you’re working within the Maschine software for both beats and melodic elements then it’s relatively seamless, but when you’re focused on Live, where the Session View and Arrangement View can’t be shown on the Komplete Kontrol’s screens, you’re reminded that it sits tantalizingly outside of NI’s largely walled garden.

It’s not a full substitute for buying a Maschine either. A few of the functions on the Maschine that make navigating the software and building tracks so quickly aren’t there, such as the dedicated group buttons. It means that you have to hit the mixer button, grab the push encoder, switch tracks then go back to the arrangement view to continue. It’s a very small thing, but anyone with a Maschine will probably just want to use their Maschine. If all you want to do is make simple beats to keep time though, the Komplete Kontrol MK2 is more than capable.

If you already have, or are planning to buy the new Maschine MK3, then using the Maschine software with the Komplete Kontrol MK2 becomes a lot easier. If you’re running both controllers in tandem then you can split the workload between both, using one for the mixer and another for arranging your tracks. 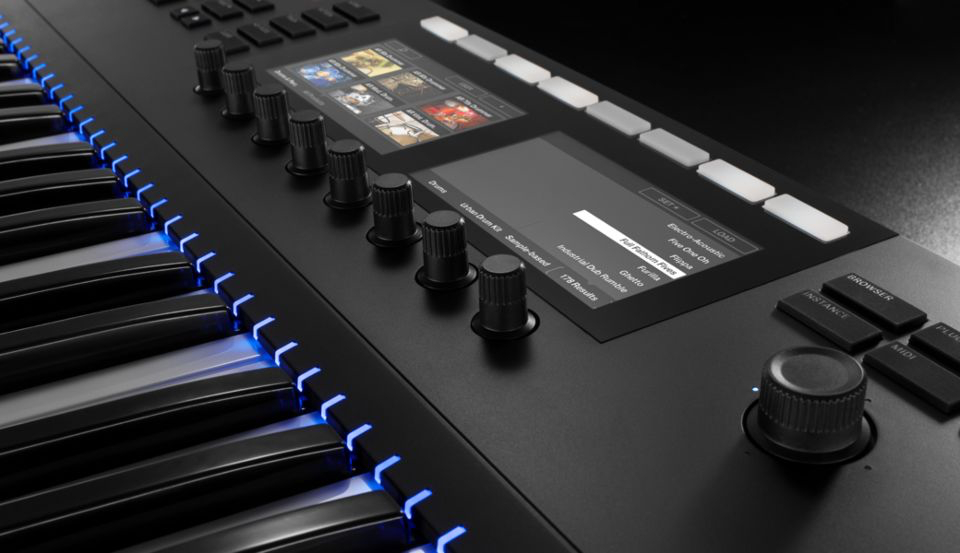 One of the criticisms of the original Komplete Kontrol keyboards is that while they’re were great for using Native Instruments software, they weren’t the best all-purpose MIDI keyboards. That’s still the case with the MK2, though admittedly to a much lesser extent: the push encoder, while a little clunky, does a good job of navigating the DAW. The mixer view on the screens is also genuinely useful, not just for tweaking volume levels, but also doing tasks like panning audio. However, these features should be viewed as handy extras rather than a full studio solution. Also, while the MK2 does the job in the studio, I’m not sure I’d be comfortable using it in a live context: Ableton’s Push or the Maschine MK3 are much better suited to quick triggering of music and on-the-fly music-making.

As with its predecessor, the Komplete Kontrol MK2 is the best MIDI keyboard you can buy if you’re already fully invested in the Native Instruments ecosystem. If you’re not, you should consider carefully whether the same job couldn’t be done just as well by something else; if you’re wedded to Live’s Operator synth then it’s a lot of money to pay for a graphical mixer. Those screens though, when they do succeed in keeping your eyes off the computer, are great, and I wouldn’t be surprised if NI’s rivals take inspiration. It’s strange to think that for all the years we’ve spent trying to get away from the screen, the solution might actually be more screens.