Native Instruments’ new Maschine is the most radical redesign to the controller since it transformed beatmaking back in 2009. But is the new model just a re-skinned version of eight-year-old hardware? Scott Wilson finds out if the Maschine MK3 is worth the cash.

Every producer wants that one thing that does it all in the studio. Whether you’re a complete beginner or a seasoned veteran, the promise of a piece of hardware that allows you to make professional-sounding music no matter your ability level is extremely alluring. Few companies understand this quite like Native Instruments, whose Maschine set the blueprint for a system that seamlessly combines hardware and software into one package.

When the first model arrived in 2009, Maschine was a trailblazer. It took the decades-old concept of a hardware sampler (specifically Akai’s MPC) and linked it to companion software that ran on your computer. The downside of this was that you couldn’t use it unless it was hooked up to a laptop. But the tradeoff was worthwhile: Maschine’s huge drum library and later support for VST plug-ins has made it more of a digital studio than a simple drum machine.

A lot has changed since the first Maschine was launched. In 2012, Ableton joined the party with its own hardware controller for Live called Push, and companies like Arturia and Akai have thrown their own hats in the ring, with varying degrees of success. Maschine, however, hasn’t changed much: the original model got a largely cosmetic upgrade in 2012, while 2013’s gigantic (and expensive) Maschine Studio added high-resolution color screens and a jog dial.

Maschine MK3, which launches on October 5 at $599/£479, isn’t a radical change in design. However, it’s the first Maschine since the original that feels like a real step forward; more significant, even, than the high-end Maschine Studio. 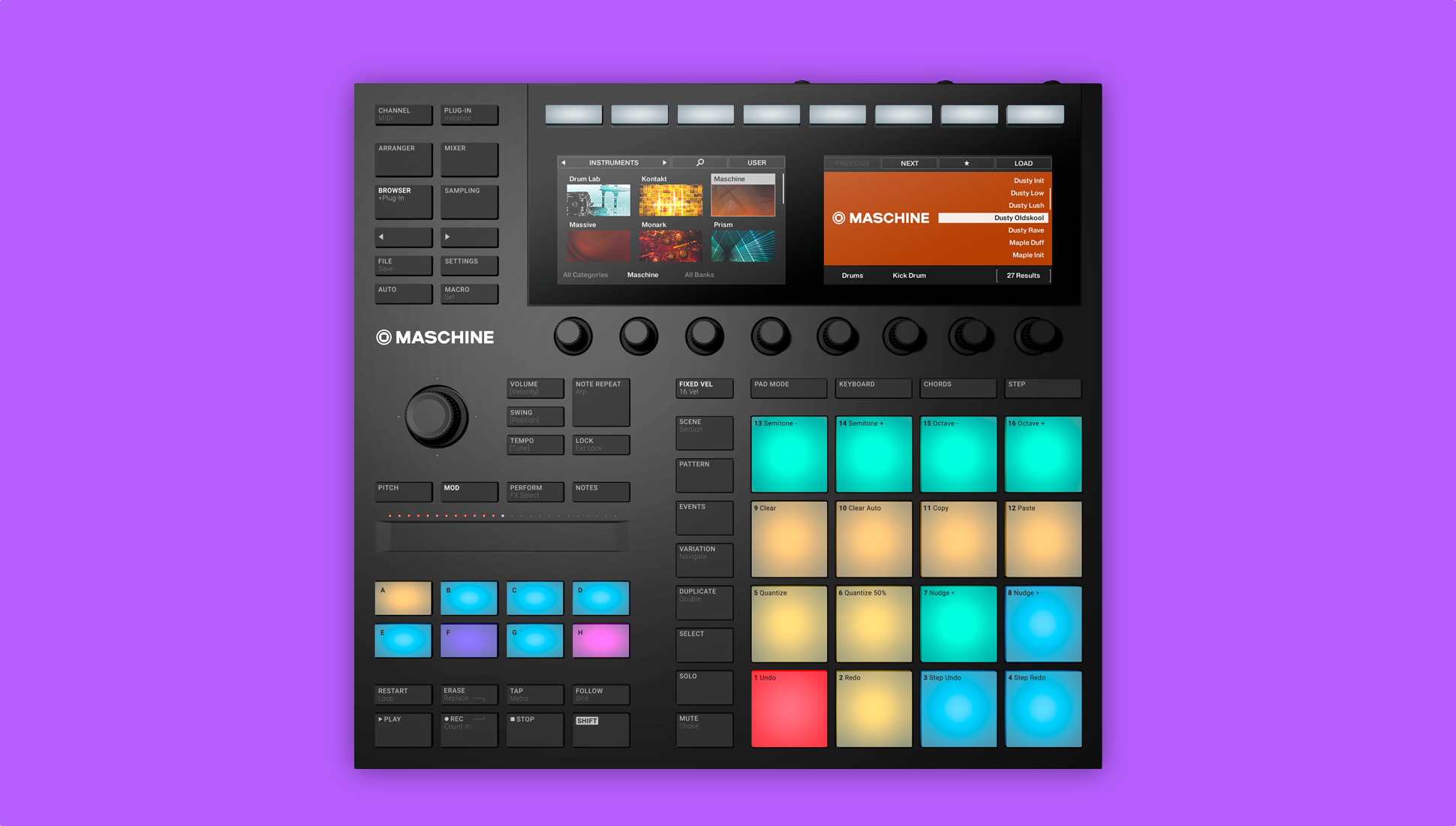 At 12.6″ x 11.85″ x 1.61″, the MK3 is just a little longer then the MK2, but almost an inch shorter. It’s also a bit heavier at 4.85 lbs, though the solid metal chassis gives it the impression of being much weightier than it is. The layout isn’t unfamiliar either, but the difference in build quality is pretty astounding. The luxurious matte black finish of the Ableton Push is clearly an inspiration; even the function names on the buttons have been etched or enclosed inside the rubber, rather than simply printed on.

The main cosmetic difference is the two high-resolution color screens. As with the  Maschine Studio screens, they’re not iPhone Retina quality, but still sharp enough to display small text very clearly. These displays are primarily used for browsing sounds and tweaking effects in tandem with the eight knobs, but also for controlling a graphical mixer and editing your patterns. As with the Studio, editing patterns with these screens can be fiddly and time consuming, but they’re great for editing audio samples.

Another eye-catching improvement is the MK3’s drum pads. They’re bigger and feel better to play, whether you drum out rhythms with one hand or two. The note repeat button has also been made larger, making it much more difficult to miss in the heat of the moment, and the volume, swing and tempo buttons are now clustered around it. These are subtle changes, but make a huge difference to the speed and ease at which you can naviagate the controller.

The third most obvious change is a new touch strip on the left of the unit. It’s similar to those found on last year’s Maschine Jam controller, but this one has dedicated buttons for different functions: pitch, modulation, effects and notes. The last of these functions is the most interesting; it allows you to strum whatever notes you’re holding in keyboard mode, a bit like playing a guitar, except with whatever weird synth sounds you want. The decision to make the strip horizontal instead of the traditional vertical is inspired: it makes adding flourishes more natural and makes the Maschine feel less like a MIDI controller and more like an instrument. 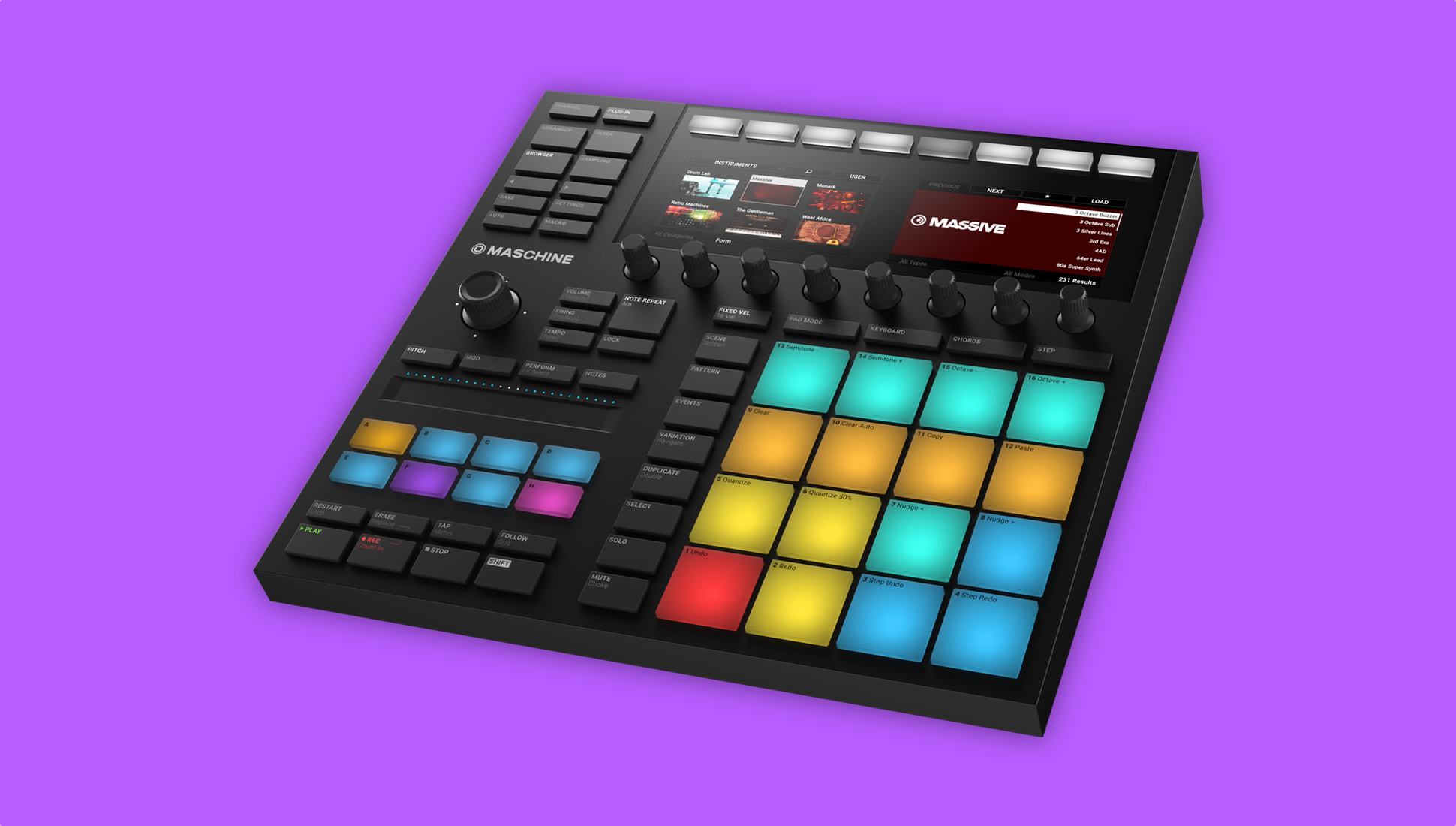 But it’s the less obvious changes that feel like the most important. As the Maschine software has developed, it’s added important features such as a keyboard mode, which maps the notes on a chosen scale to the drum pads, and a chord mode, which lets you play a chord just by hitting a single pad. Previously, these modes have been hidden inside menus or only accessible via button shortcuts; now, they have dedicated buttons above the pads.

The difference this makes to the Maschine’s usability is pretty significant. I’ve previously found it difficult to remember the shortcuts for these modes, and as a result gravitated towards the Ableton Push for playing melodies and chords simply because it’s better laid out for these functions. The 16 pads still aren’t ideal for step sequencing, but the Maschine’s one-button chord mode is much easier than playing chords on the Push, which still requires you to remember the correct hand shapes.

These changes make the Maschine much more of an all-in-one production tool than it was before. Anyone who makes techno or who does a lot of sequencing will probably still prefer the Maschine Jam for these tasks, but overall the MK3 is a far more versatile controller. 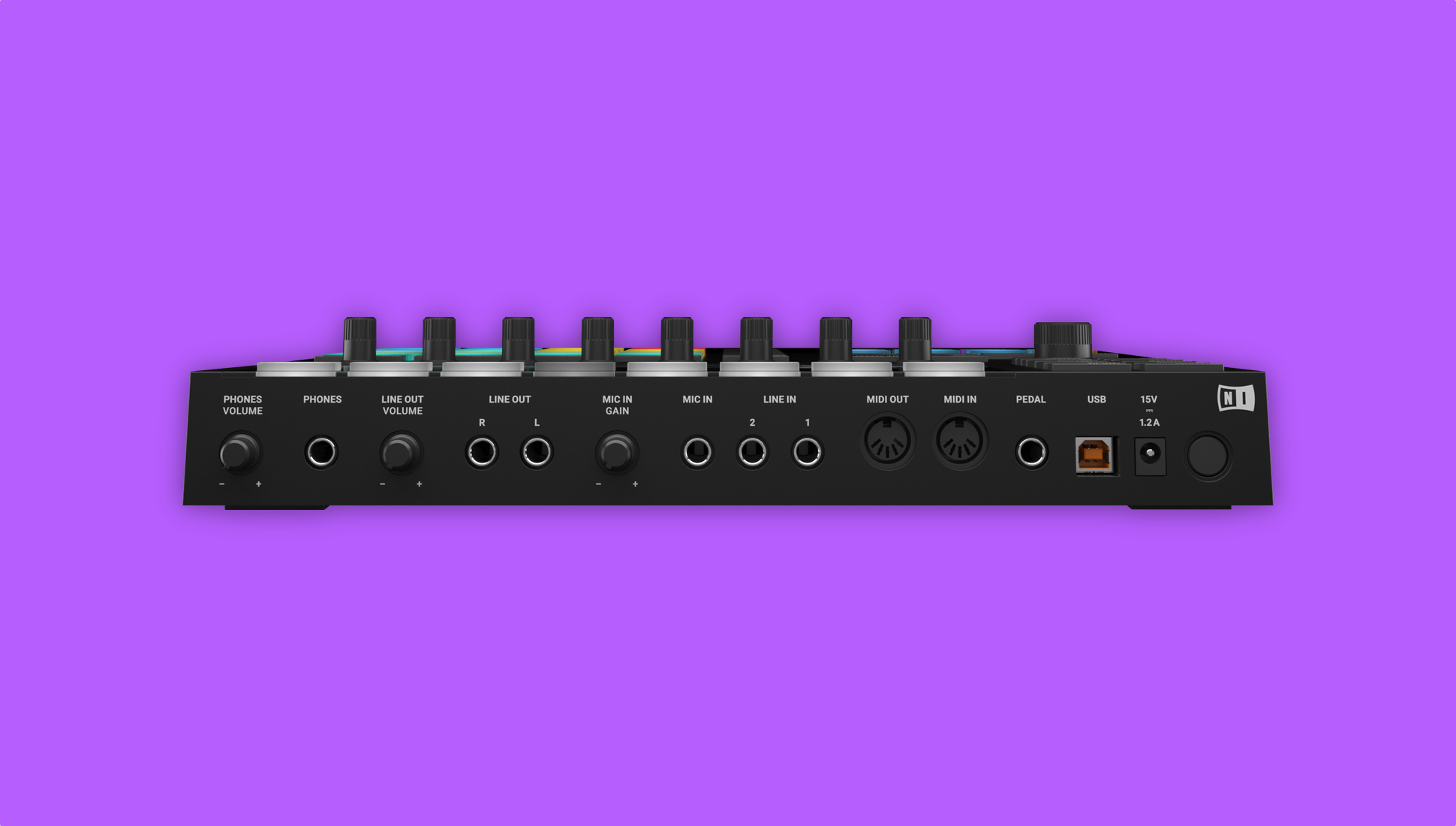 Another great new feature (one that artists who use the Maschine for live performances are going to love) is a new lock button, inherited from the Maschine Jam. This takes a snapshot of your current set, allowing you to go wild with effects without ruining everything. It’s good for experimentation, but it’s also perfect for creating crazy build-ups; a satisfying drop is as simple as hitting the lock button again to return to the original state. This feature is probably going to get abused by big room performers everywhere, but there’s no denying it’s a lot of fun to use.

The MK3’s most surprising new feature is the built-in audio interface. This is where the new Maschine really gives the Push a bloody nose; Ableton has made a lot of the Push’s sample editing abilities, but there’s no way to record sound directly into Live unless you own an audio interface. On the Maschine MK3, you can just plug a synth or a turntable into the line inputs and record straight into the Maschine software. It’s going to be a game changer for anyone that’s ever wanted to record high quality audio outside the studio without bringing along an additional box, and it’s very convenient being able to plug your monitors directly into the hardware.

The only thing that I don’t love, in fact, is the four-dimensional push encoder on the left, which is both a knob you can turn and a replacement for traditional directional buttons. One thing it can do is allow you to perform mixing tasks with your left hand while the right is free to play pads. Yes, it’s an efficient use of space and good for multi-tasking, but in practice there’s something about using it to scroll from channel to channel that just doesn’t feel very natural. 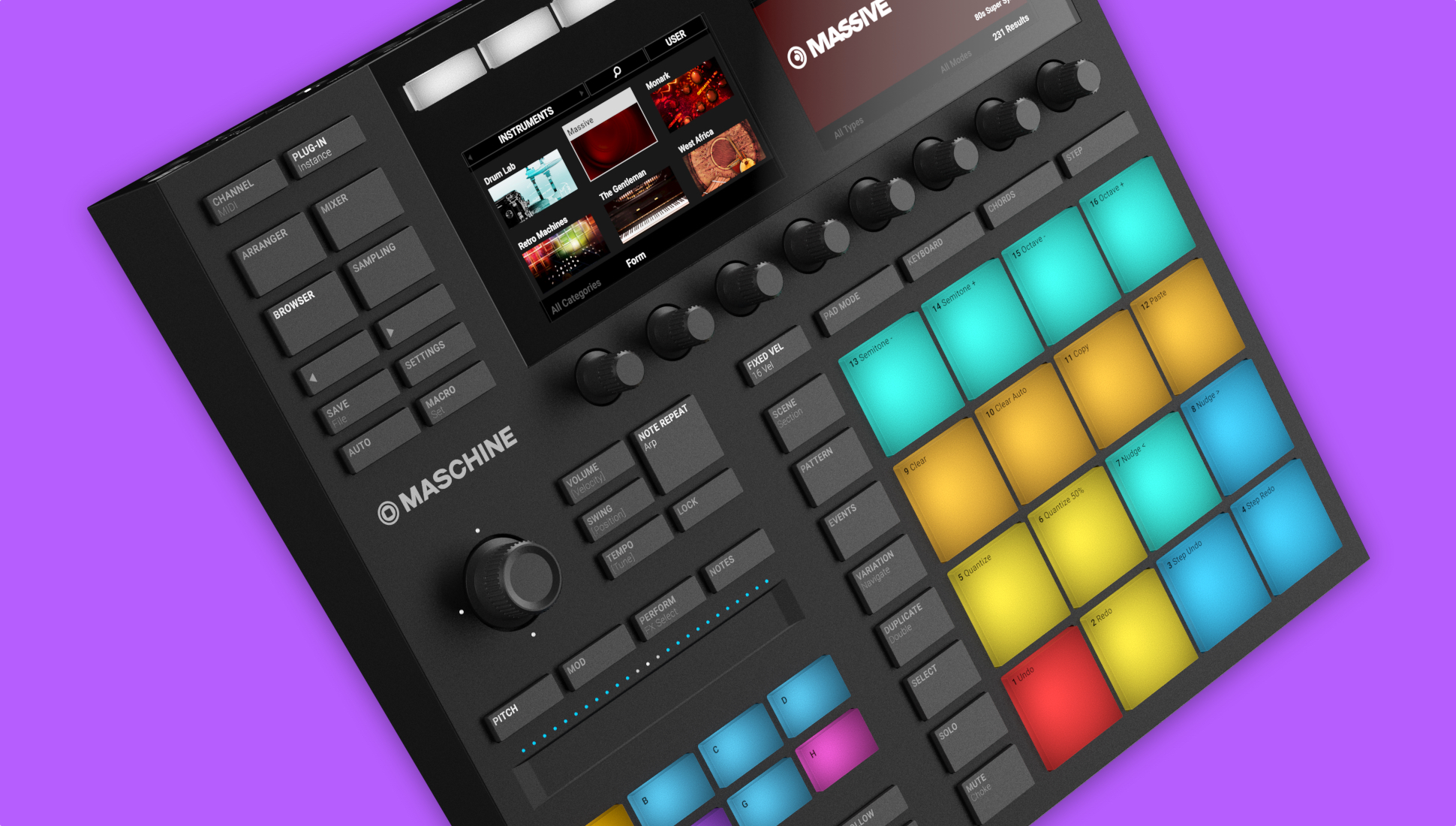 If you own a Maschine MK1 or MK2, the MK3 sports more than enough improvements to make it worth upgrading immediately. It’s the same controller, but better in every possible way. If you own a Maschine Studio, the decision will be trickier to make. I asked Native Instruments whether they saw the MK3 as a replacement for the Studio as well, and the company’s response was that it sees both co-existing happily. NI noted that the Studio has dedicated mixing controls the MK3 doesn’t, but for many users that won’t be important – the much, much smaller size of the MK3 is likely to be the deal breaker.

If you don’t already own a Maschine, then it’s more difficult to recommend outright. For all the improvements NI has made to the hardware, it’s not a quick, easy way to make music: it takes many hours to learn, and even longer to master. If you’re a beginner, then Ableton Live and the Push controller is a little more forgiving. If you’re more attracted by NI’s superior choice of software instruments though (a selection of which are free with all Maschines), then the Maschine Jam might be a better bet – it’s not as powerful, but it’s less expensive and quicker for sketching out tracks.

Overall though, the Maschine MK3 is excellent. Native Instruments could simply have added some color screens and be done with it, but they’ve achieved something much more difficult: improving a classic without losing the essence of what made the original it so great.