From synths to software via cute, one-off effects units and beyond, 2018 is shaping up to be a memorable year for music makers. Scott Wilson picks out the most exciting new studio gear to look out for over the next 12 months.

Last week, the music tech world landed in Anaheim, California to show off its new gear for the year ahead at the annual NAMM show. This year’s crop of synthesizers, drum machines and modules proves that the craving for analog gear is just as strong as it’s ever been, even if one of 2018’s most anticipated new releases – Ableton Live 10 – is software.

As well as Korg’s big (and expensive) Prologue and Moog’s DFAM – an analog percussion synth that offers an original take on the drum machine – there was a whole crop of semi-modular synths with patch bays for internal patching or connecting to external Eurorack modules. There was also Empress Effects’ all-in-one Zoia box, a versatile instrument that doesn’t fit into any existing category.

Below we’ve rounded up the best of NAMM 2018, adding a few more studio tools to be excited about in the coming year, including new gear from Elektron, Teenage Engineering and more. If you’re looking for new ways to make music with in 2018 and beyond, read on. 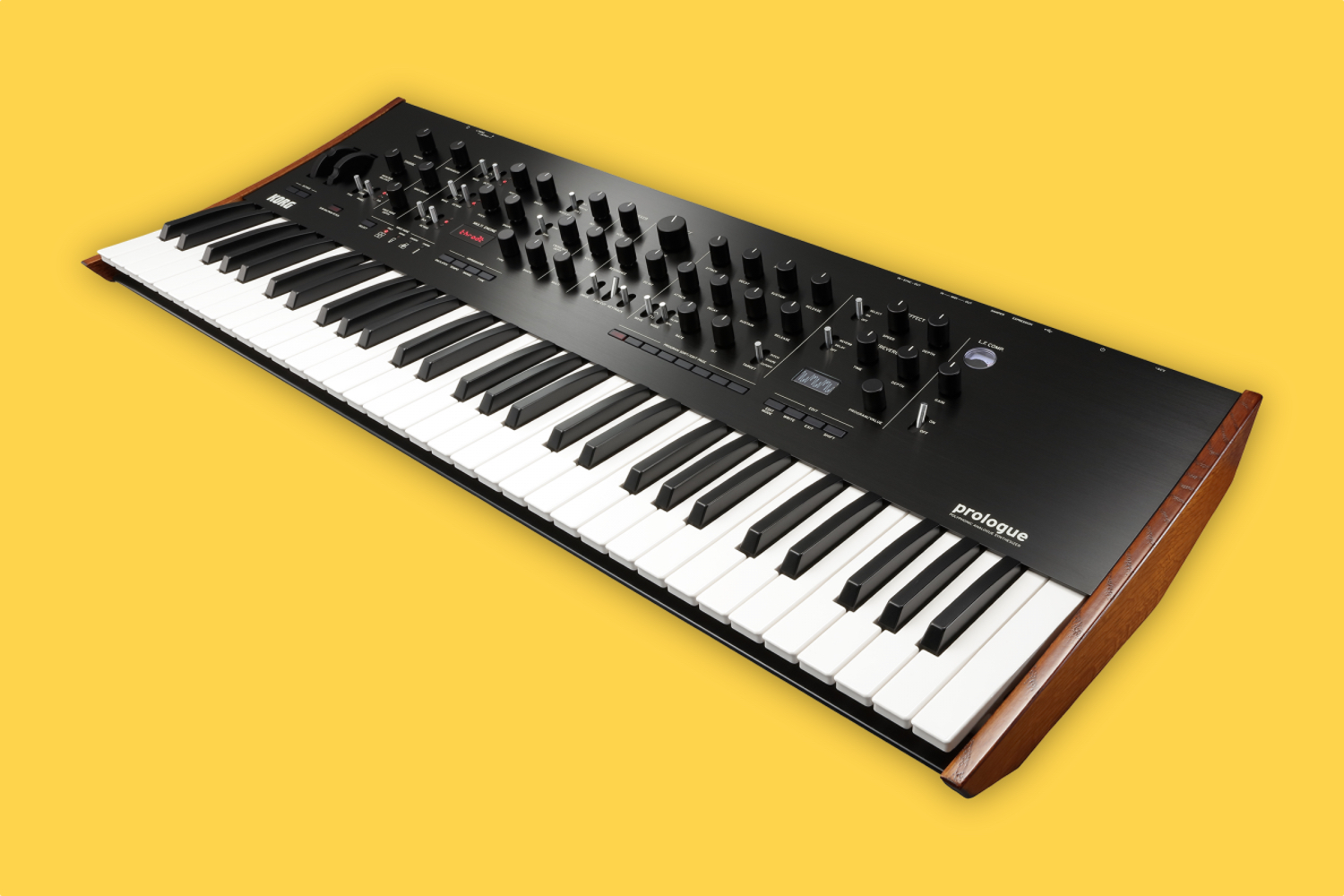 Since 2012, Korg has been focused on making affordable entry level and mid-range analog synths, such as the Volca range and 2016’s Minilogue, a sub-$500 polyphonic instrument. Its latest instrument, the Prologue, is a return to the high-end polysynth design of the ’80s with the addition of some powerful modern technology – most notably the ability to program your own oscillators and effects.

Korg isn’t the first company to allow anyone to code a synth’s components – see also the Critter & Guitari Organelle and many Eurorack modules – but rarely do you see the function in such a high-end instrument. The Prologue could be the most futureproof analog polysynth ever, as long as you can afford it – the eight voice model is $1,499 and the 16-voice version is just shy of $2,000. 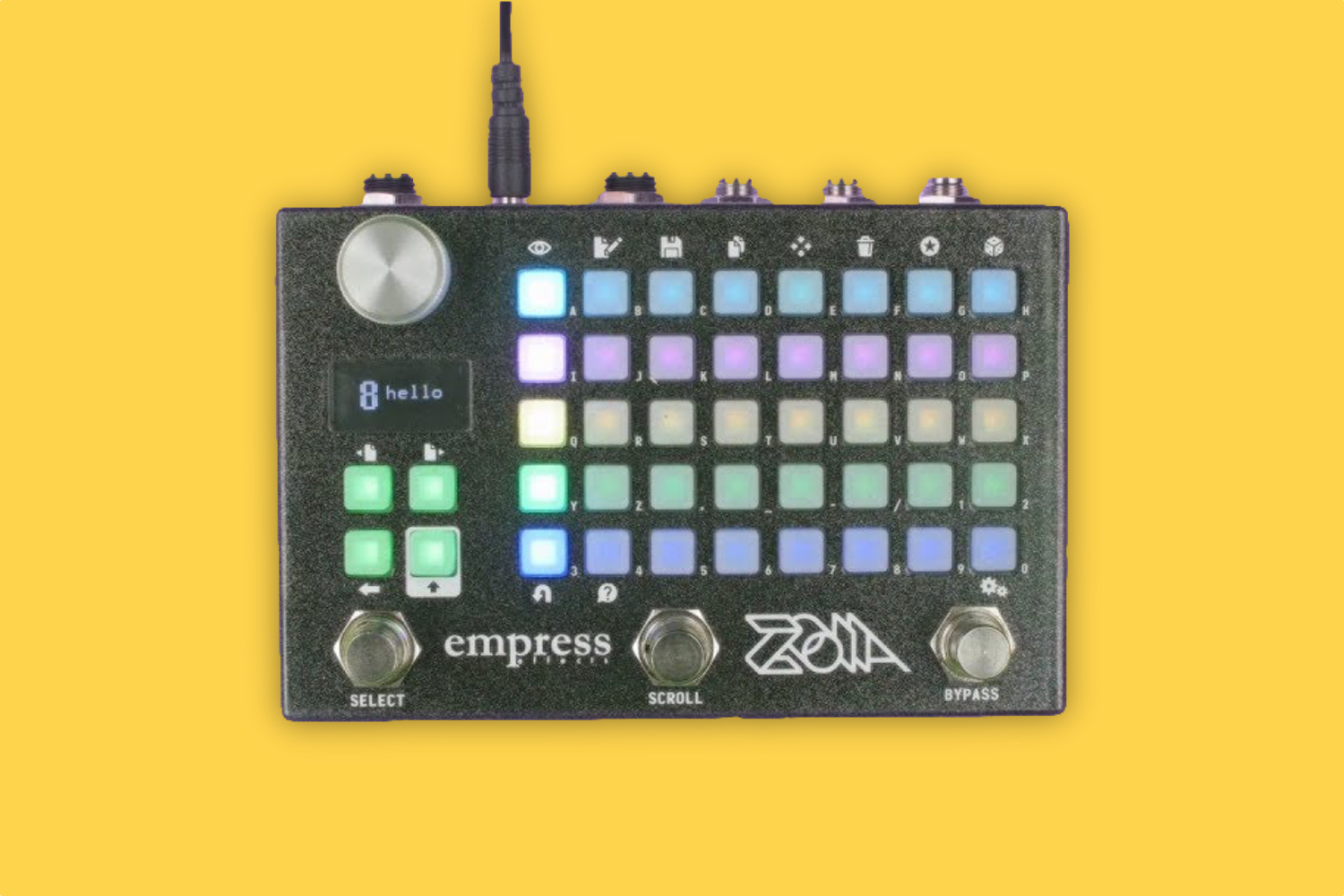 It’s not clear exactly what category Empress Effects’ Zoia slots into, but the company calls it a “multi-thing” that encompasses instruments, effects and utilities in one very small box. The way it works – allowing you to load virtual “modules” and connect them into versatile patches – is probably closer to what a modular synth would do than a simple multi-effects unit, all for $450.

It’s the sounds that the Zoia can create that are really impressive though: sequencing an oscillator with an two LFOs, for example, will generate some really strange blips and gurgles. Once you’ve created a patch, you can save it to an SD card, and there’s a random create function that will create patches for you if you don’t want to get your hands dirty. Expect this to be a cult hit. 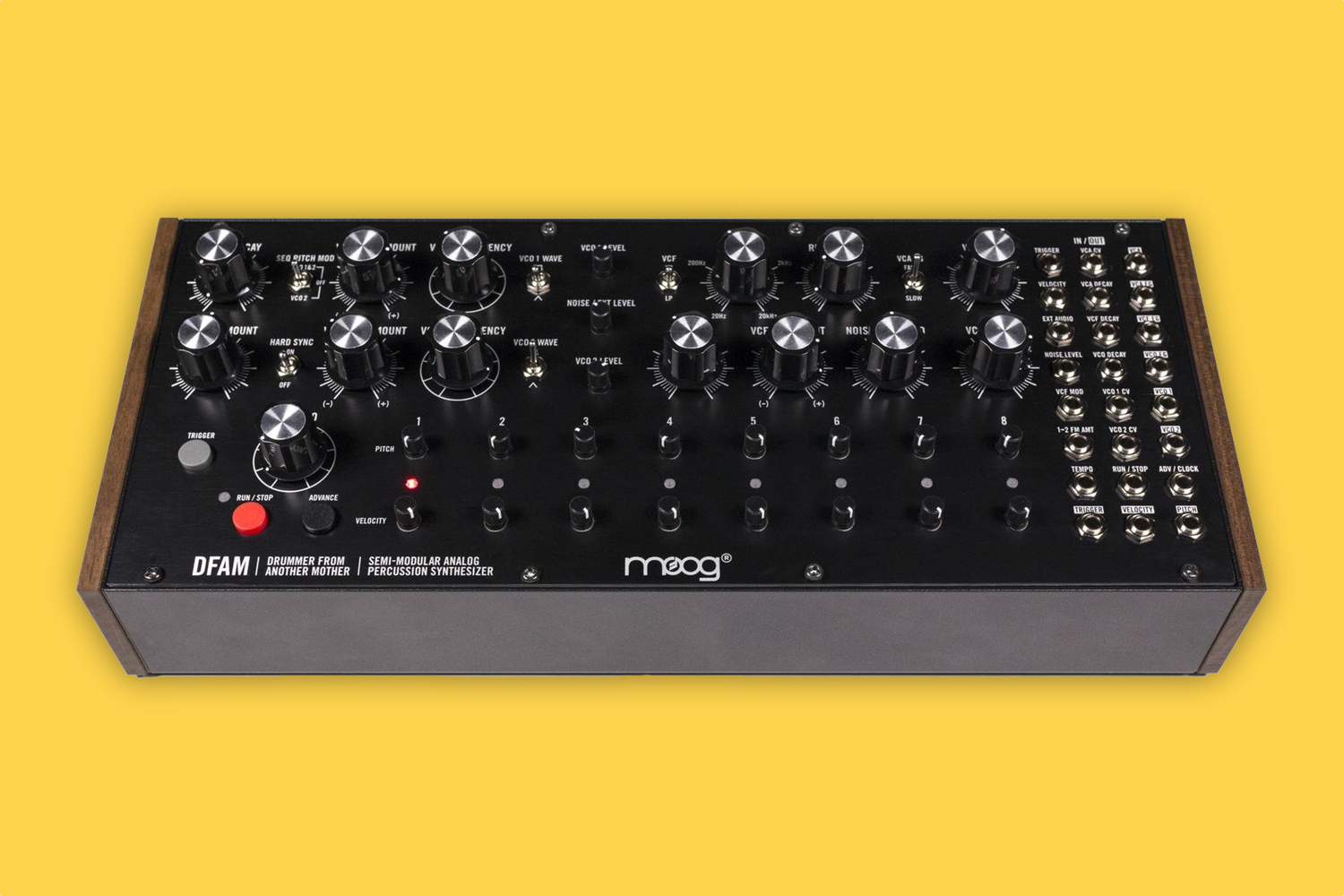 Moog’s DFAM – or Drummer From Another Mother – is the first instrument from the legendary synth company dedicated to percussion. Like its close sibling, the Mother-32, DFAM is a semi-modular synth with a patch bay that allows you to use cables on itself to create more unusual sounds or patch it to Eurorack modular gear as part of a larger setup. You can even connect a DFAM and Mother-32 for your own portable Moog groovebox.

It’s not a drum machine per se (Moog prefers the term “analog percussion synthesizer”), but it has a very capable sequencer and doesn’t require any extra patching if you’d rather use it out of the box. If you’re looking for something to make techno that isn’t the usual 808 and 909 sounds, it could be an ideal tool for creating unusual kicks, snares, snaps and bleeps. 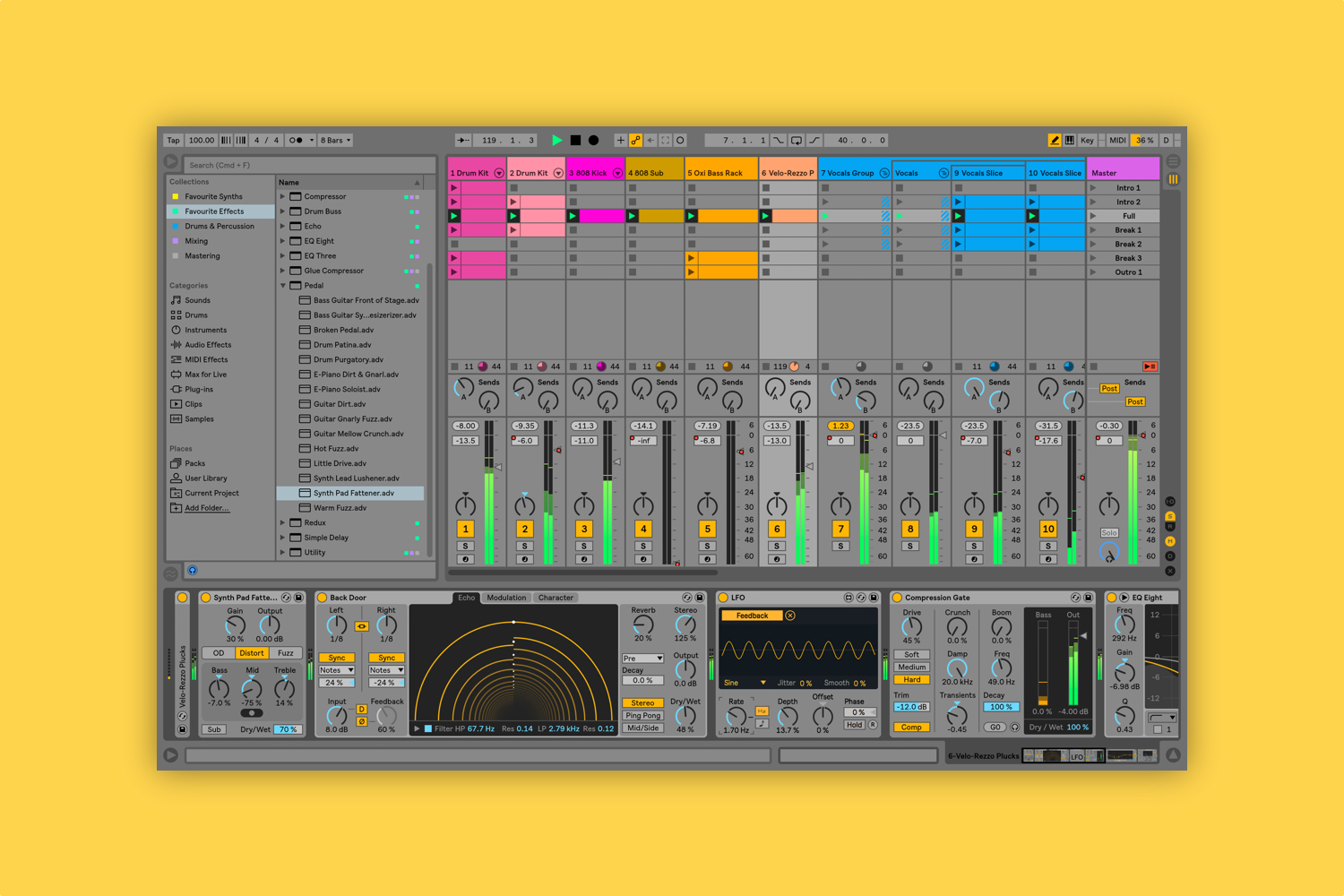 It’s been five years since Ableton released Live 9 but its successor is finally ready for release. On paper, Live 10 looks as if the long wait between full versions is going to be justified – there’s a new synth called Wavetable, three new effects (including a Space Echo clone) and a bunch of cool improvements that make it easier to make music, like Capture, which means you don’t need to be recording to catch an idea.

The biggest change however is that Max For Live is now baked into Live itself, rather than being an optional add-on. You’ll need to buy the more expensive Live 10 Suite to take advantage of it, but it means that you can connect your Max For Live devices (like the handy LFO) to parameters across Live 10’s instruments. It’s a very cool, very useful improvement that will undoubtedly change the way people interact with Live. 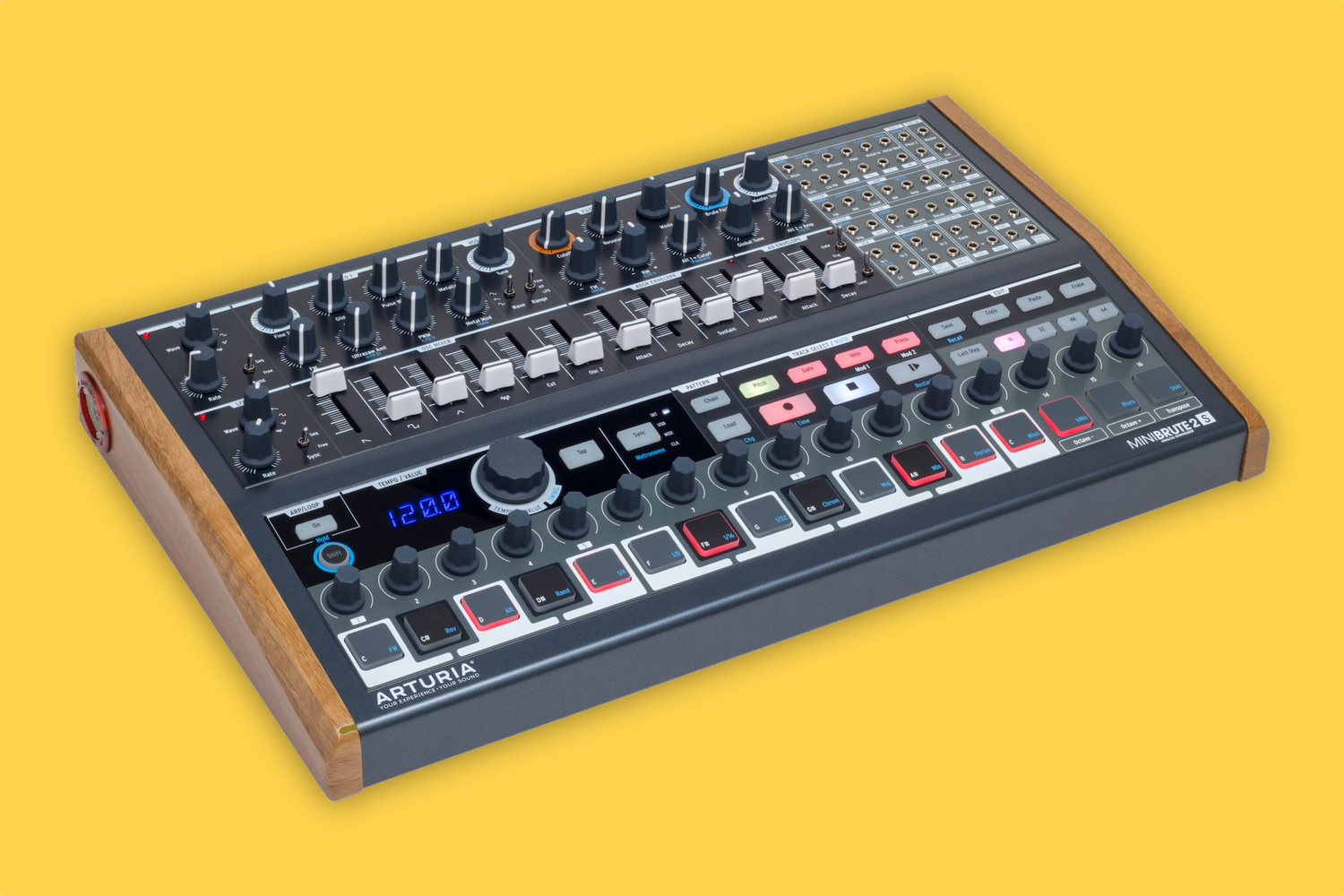 Arturia’s five-year-old MiniBrute is looking pretty long in the tooth these days, so the new MiniBrute family can’t come quickly enough. As well as RackBrute cases with space for your Eurorack modules, there’s the MiniBrute 2, which adds a small patch bay to the keyboard synth and the MiniBrute 2S, which dispenses with keys and replaces them with pads and a sequencer – a bit like a giant TB-303.

It’s the 2S that looks like the model to be excited about, mainly because it we’ve already got plenty of keyboard synths to choose from and the sequencer and pads are inherited from Arturia’s excellent Beatstep sequencer. It could also be the best point of entry yet for anyone who wants to get familiar with how modular patching works without a huge financial outlay. 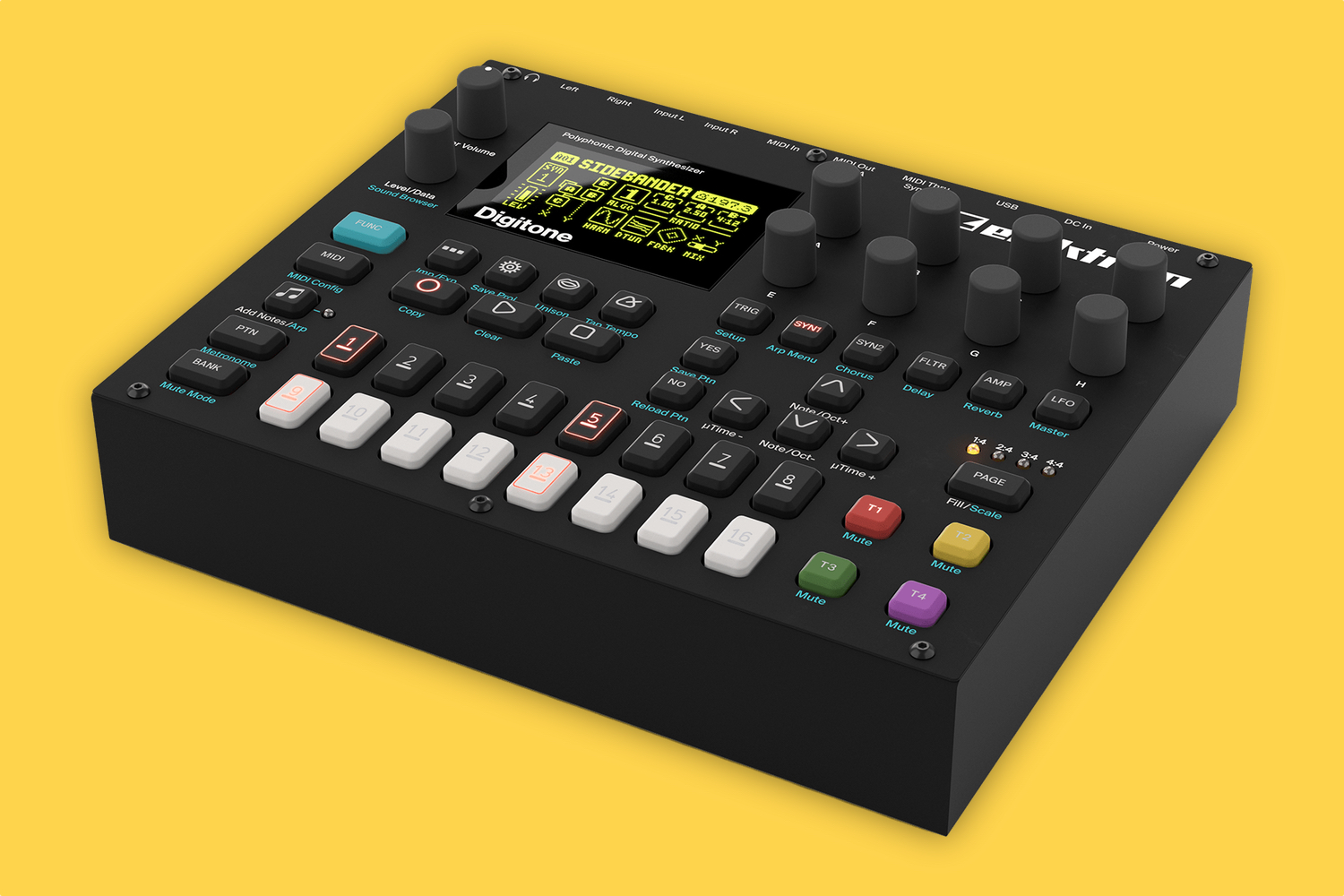 Last year, Elektron released the Digitakt, a digital drum machine that proved hardware doesn’t need to be analog to sound great. It’s not entirely surprising that the Swedish company is aiming to recapture some of that magic with the Digitone, an FM synth companion for the Digitakt that has all the same sequencer tricks such as individual track lengths, parameter locks, micro timing and trig conditions.

FM synths like Yamaha’s classic DX7 are generally thought of as difficult to program, but Elektron says the Digitone is significantly more user-friendly. The synth achieves this by combining an FM sound engine with the subtractive synthesis signal flow you’d find on a classic analog device. Whether it really is that easy to use remains to be seen, but if it’s half as good as the Digitakt, it should be a lot of fun to use. 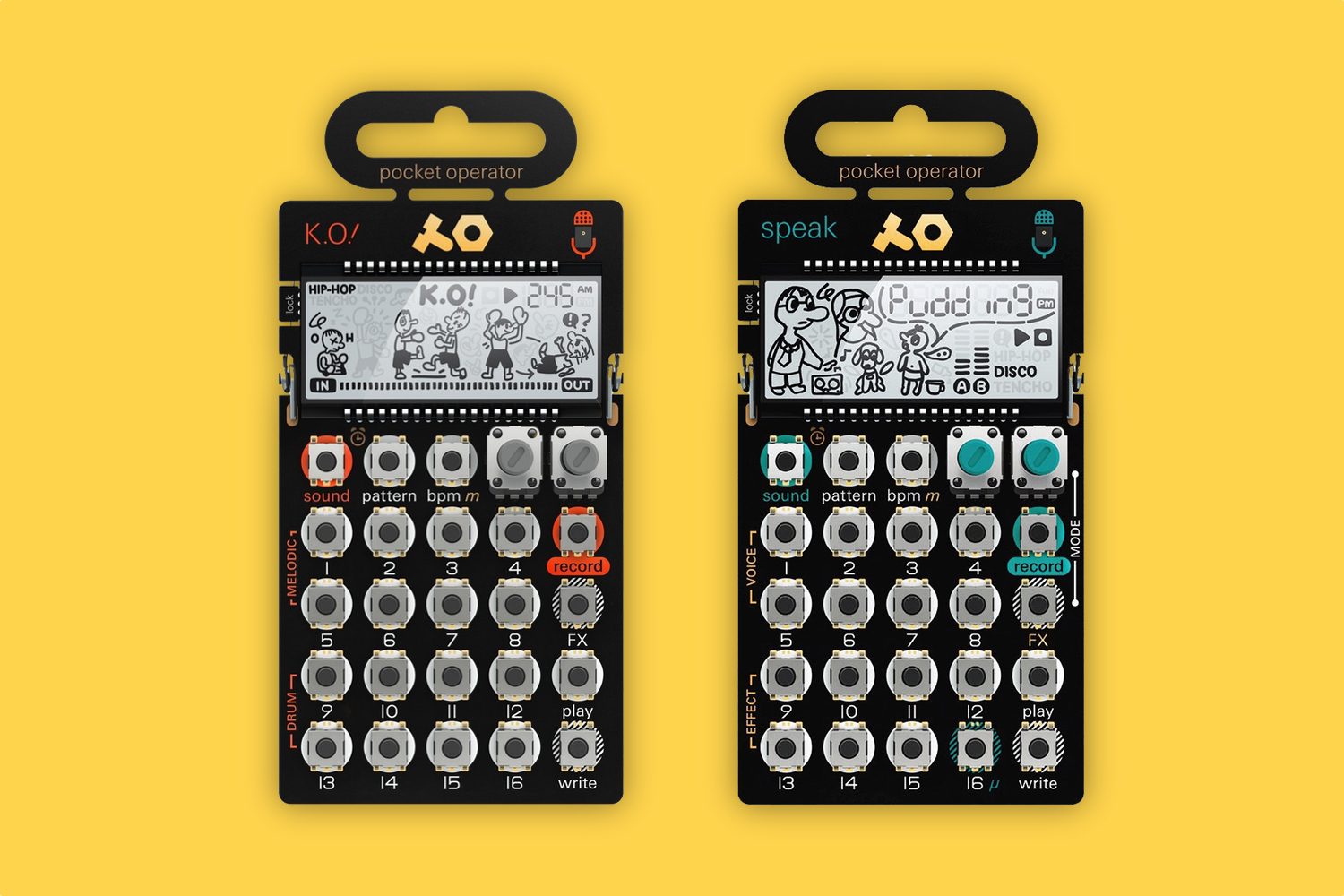 Since launching in 2015, Teenage Engineering’s Pocket Operator series has brought a sense of fun and accessibility to synthesis rivalled only by Korg’s Volca range. This month, the Swedish company added two new models to the family: PO-33 KO!, a mini sampler, and PO-35 Speak, a vocal synth. They’re just as cute as the rest of the range and this time they both add microphones for utilizing external sounds.

However, both models are a little bit more than just sample-based instruments. The Speak, for example, is more of an all-in-one groovebox that allows you to upload your own drums using the Microtonic VST (a feature carried over from last year’s Tonic model). The KO! functions in a similar way, offering eight drum banks and eight melodic banks for making full tracks. 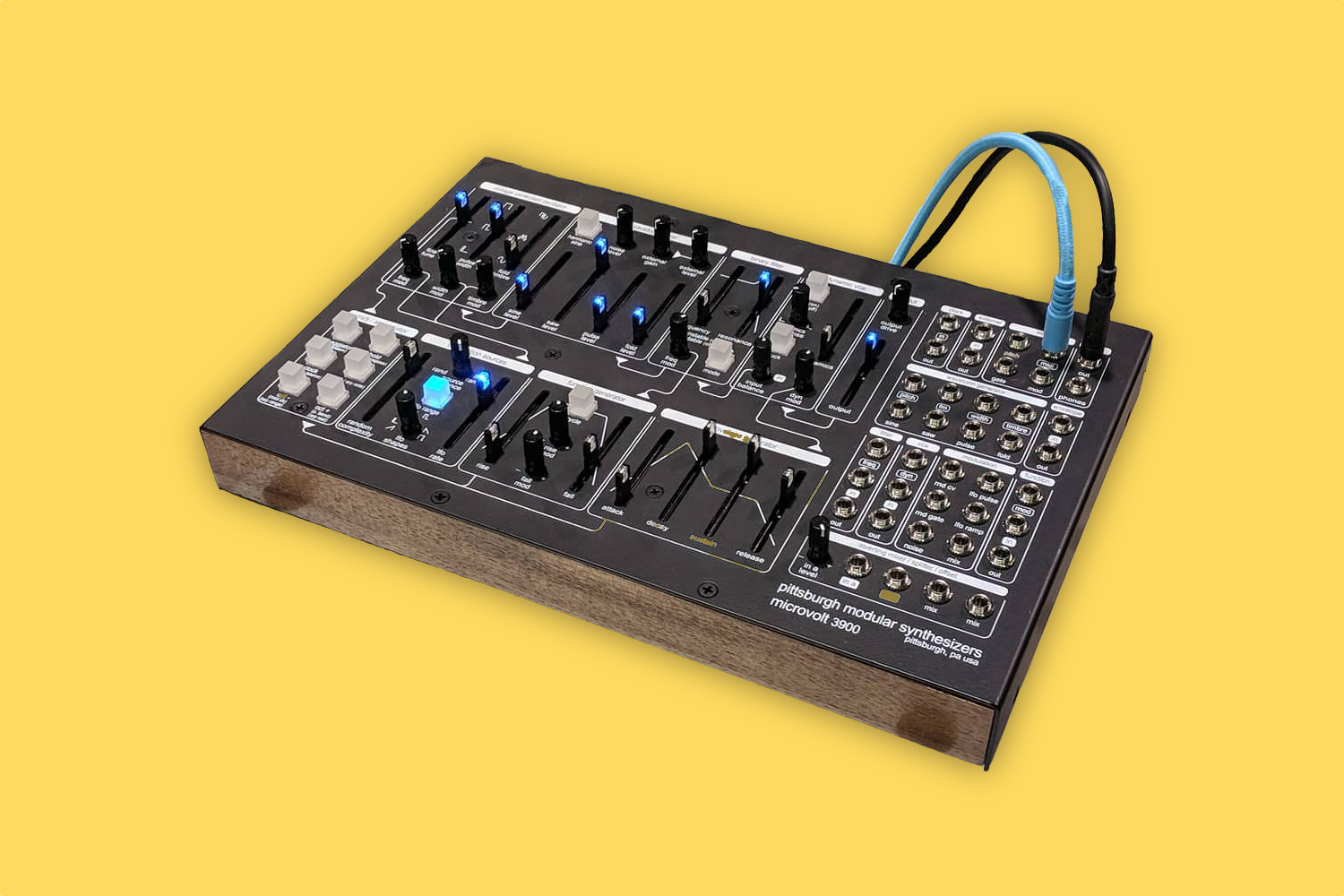 If there was any kind of trend at this year’s NAMM show, it was the number of semi-modular synthesizers on display. Moog’s DFAM and Arturia’s MiniBrute 2 are standalone synths you can patch or plug into a Eurorack, as is Pittsburgh Modular’s Microvolt 3900. At $629 it’s not the cheapest option, but it looks like it could be a rival to Make Noise’s popular 0-Coast.

As well as a 39-point patch bay for CV control and MIDI, Pittsburgh Modular says the Microvolt 3900 is capable of creating “complex harmonic and textured sounds” thanks to features like the LFO and sample-and-hold circuit combined into a single modulation source, allowing for interesting sonic blends. Better still, the company claims it’s accessible for newcomers and live performers. 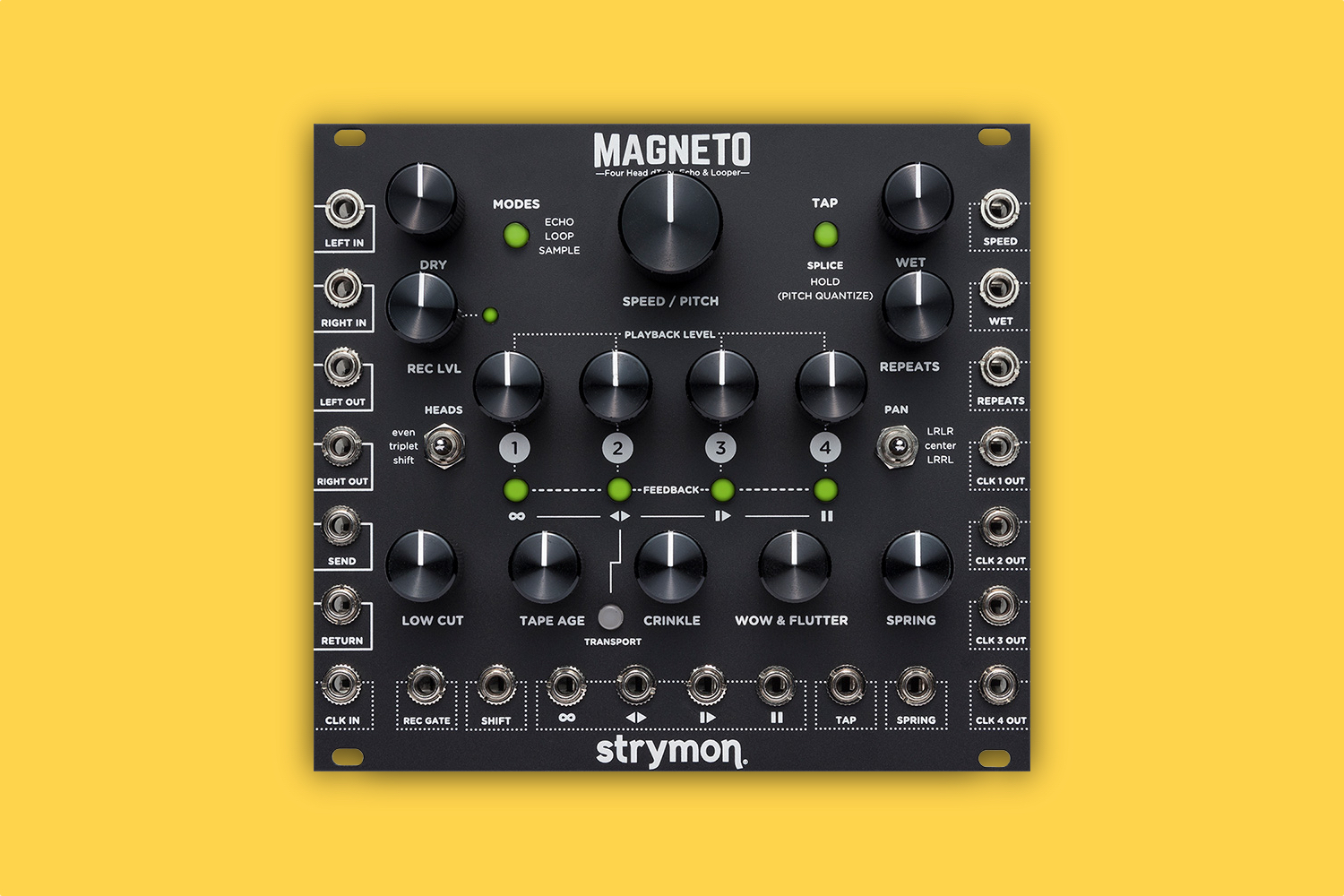 We’ve been waiting a long time for Strymon’s Eurorack debut – over two years, in fact. When the first module from the company (known for its range of powerful digital pedals such as the BlueSky reverb) was announced in 2016 it was known as the Generalissimo and sported a green look. The new Magneto might look different, but it’s still a four-head tape echo emulator with all the CV you’ll need to create wild delay effects.

Delay modules for Eurorack aren’t hard to come by, but Magneto looks like a real Swiss Army knife. As well as emulating a stereo multi-head tape delay, the module functions as a looper, phrase sampler, vintage spring reverb unit, phase-aligned clock multiplier, chaotic oscillator and zero latency sub-oscillator. Combine that with Strymon’s excellent reputation, and you have one very exciting module for 2018 – assuming it isn’t put back again.

Read next: Our music tech predictions for 2018: SoundCloud’s survival, the Bitcoin boom and more modular madness