Buying your first synth: What to consider and where to get the best deals

Looking for a first synth to compose music or just make some noise? Scott Wilson tells you everything you need to know and picks seven of the best models for novice synthesists.

There’s never been a better time to buy a first synth. Synthesizers are smaller, more affordable and more inviting to beginners than ever before, and whether you want to build your own or phase out Ableton Live’s software instruments, it’s possible to buy a  synth that you can make music with for not a lot of money.

However, if you’re just starting out, it’s easy to be confused. Some synths for beginners don’t even look like synths in the traditional sense, while others may have more features than you need, especially if you’ve already experimented with apps or software. The most important consideration for novice synthesists: cheap doesn’t necessarily mean easy to use.

It’s tempting to blow all your money on a high-end synth in the hopes you won’t ever have to buy another one, but this could turn out to be a false economy. The more expensive the synth, the more functions it’s likely to have, and if you’re a complete beginner you’ll probably find yourself spending hours browsing menus instead of making music. Choose a cheap, simple synth in the $50 to $200 bracket to learn with and you’ll have a better idea of where to go next.

If you’re already experienced with software synths but want to start working outside the box, there’s still not much point in paying more than $500. Roland, Korg and Arturia have made huge inroads creating affordable gear over the past few years, and a lot of it is stuff you’ll be happy to keep around, even if you upgrade to a more expensive model. 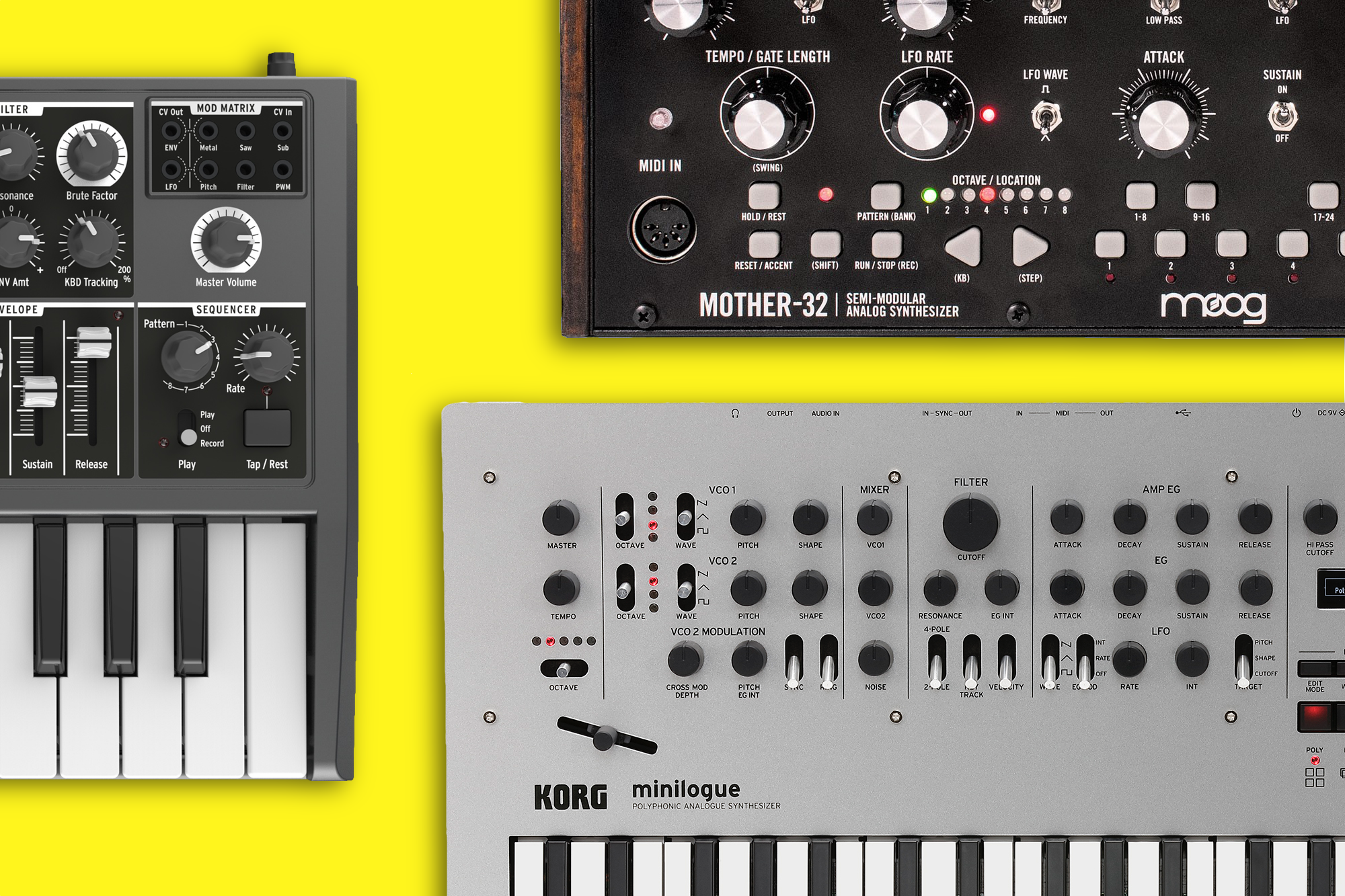 Consider buying a synth with a sequencer

If you’re buying a first synthesizer, it’s possible that your keyboard ability will be limited to non-existent. If this is the case, you’re going to want to make sure your synth has a built-in sequencer of some kind. This will allow you to write a melody or a bassline, note by note, into the on-board memory, leaving your hands free to tweak stuff like cutoff and resonance (vital if you want to create an acid-like sound) or add effects while your pattern loops in the background.

Make sure it’s not too big

Gigantic synths look cool, but if you don’t have easy access to it then it’ll probably get forgotten about. If you’re starting out you’re likely to have very limited studio space: buy a compact synth, and you can have it sitting on a desk and ready to use all the time, rather than having to set it up and pack it away. If it’s small enough to throw in a bag, you’ll be more likely to make music outside your home as well.

Consider buying a model with a built-in speaker

If you’re just curious abut synths and want something to noodle on, you probably won’t have a mixer, soundcard or monitors to route your synth’s audio through. If this is the case, consider buying a synth with its own speaker. It won’t sound great, but it’s more liberating than using headphones. Just make sure to use headphones if you’re in public though – nobody wants to hear your techno bassline on the train.

Some people believe analog synths sound “warmer” than digital, and some can’t tell the difference. For a first synth, the way the synth sounds isn’t that important. However, choosing between analog and digital is still an important consideration, because the type of synthesis employed by the instrument might have a bearing on whether you make your own sounds with it or you just stick with the presets.

If you’re starting out, subtractive synthesis – the type commonly associated with analog synths – is arguably the easiest and most logical type to learn. Digital FM synthesis on the other hand, is often confusing for even the most experienced of musicians. It’s also possible to get digital synths with analog modelling technology, but the same advice applies: buy a subtractive synth that has clear controls and labels for the oscillators, envelopes and filters and you’ll pick up the basics of synthesis in no time.

7 of the best synths for beginners 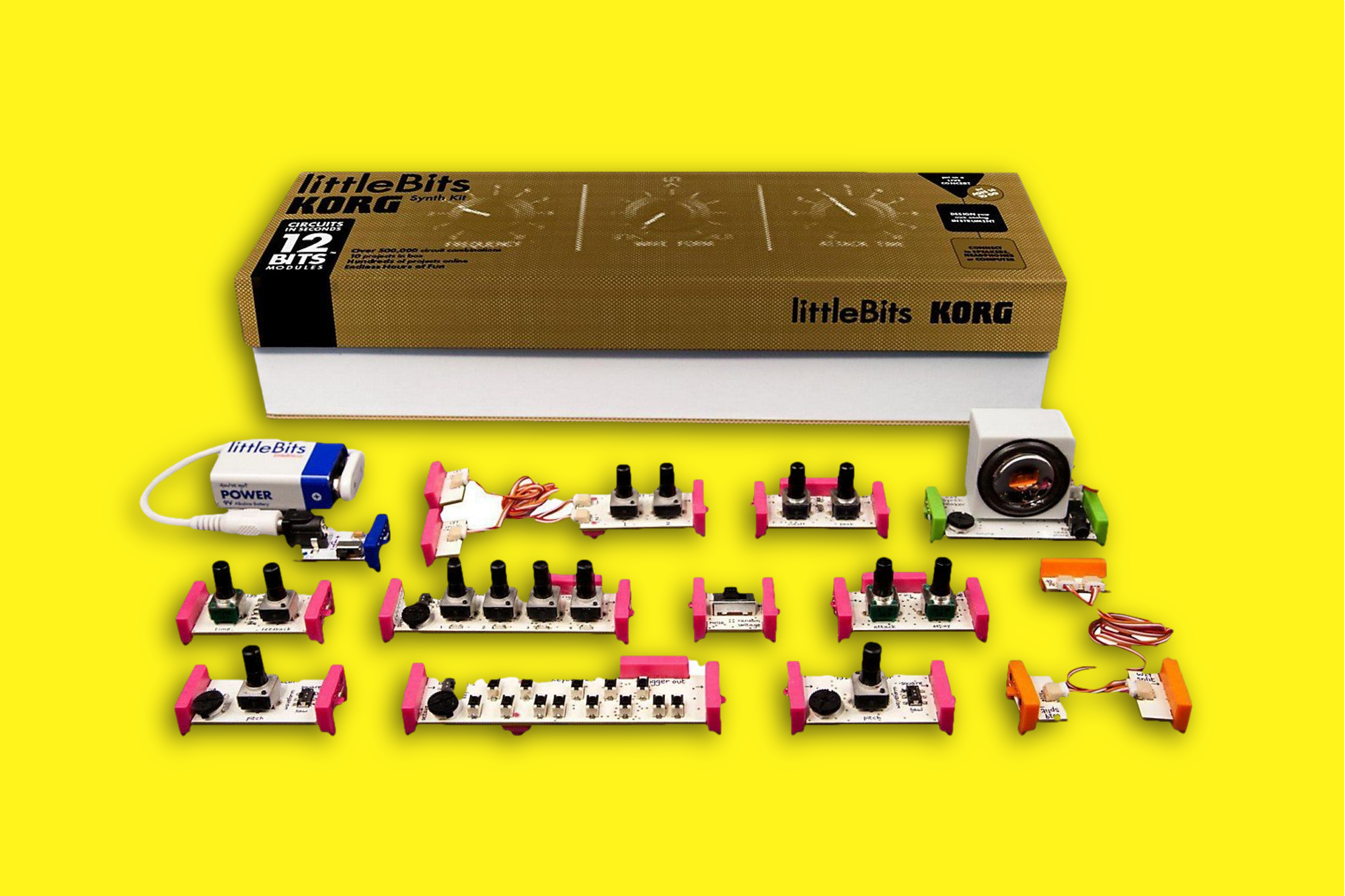 Korg’s littleBits synth kit is the synth to go for if you’re fascinated by all the knobs and switches and want to know more. Spawned out of littleBits’ home science lab for kids and grown-ups, the company’s music-focused collaboration with Korg consists of a box of tiny modules that cover all the components of a basic synthesizer: oscillators, envelope, sequencer, keyboard, filter, delay, mixer and speaker.

Unlike most DIY synth kits, which require soldering, Korg and littleBits’ team-up snaps together with magnets. It also comes with a comprehensive instruction booklet that explains how each part of the synth works and how to get it to make a sound. If you’re starting at the very beginning, this kit will tell you everything you need to know. With some light modification, the packaging even doubles up as a rack for your modules. 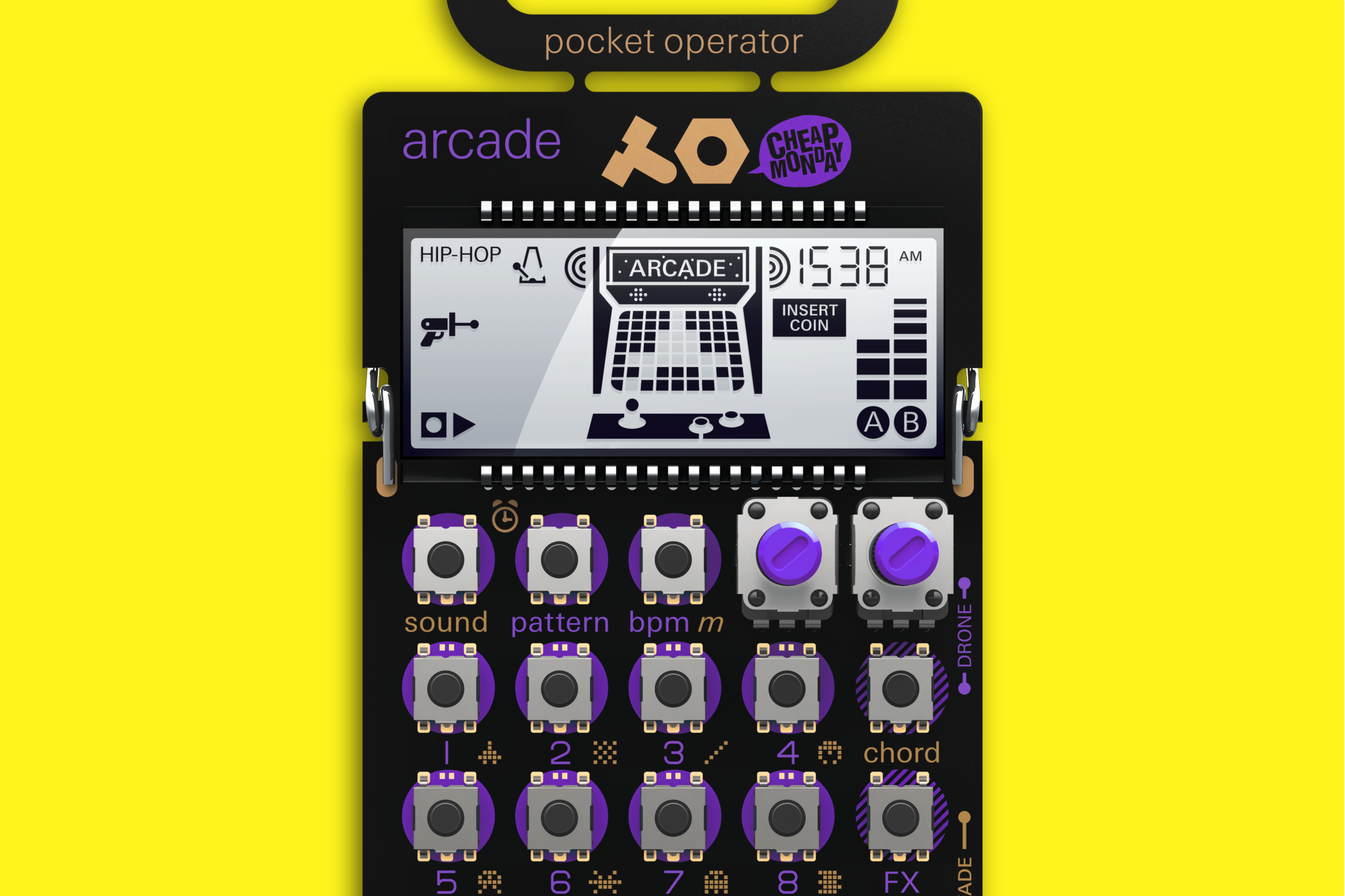 If you want your first synth to be fun, Teenage Engineering’s PO-20 Arcade is like making music with a Game Boy. One of seven pocket-sized instruments with their own personalities, the PO-20 is a chiptune for creating 8-bit beats and melodies with an LCD screen that displays your actions as a cute, animated arcade scene. It sounds as lo-fi as you’d expect a synth on a tiny circuit board to sound, but it’s got a lot of character.

The PO-20 has a lot of features for its size: the sequencer, 16 effects and space for 16 patterns is enough to create simple but detailed loops, which you can record into software such as Ableton Live or sync with the other Pocket Operators in the range. If retro video game music isn’t your thing, put together a PO-12 drum machine, PO-14 bass synth and PO-16 lead synth for a hardware techno rig that’s less than $150. 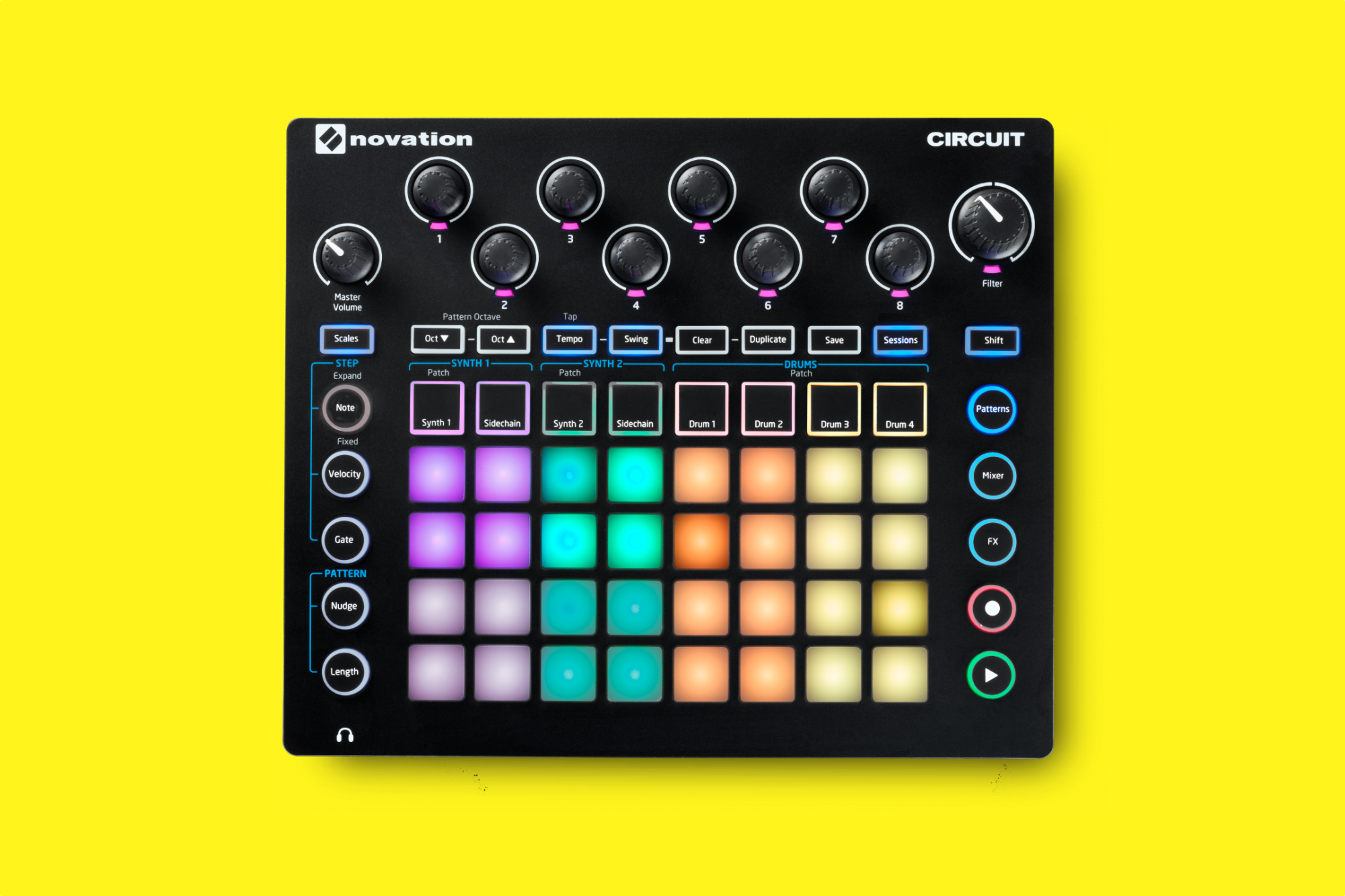 Novation’s Circuit isn’t just a synth – it’s a drum machine, sampler and sequencer as well. It’s the ideal first synth for someone that wants to make more than just a melody, but doesn’t like the distraction of making music with a laptop. It’s equally as good for someone that’s an Ableton expert that wants a hands-on tool for sketching ideas outside software.

The Circuit is also quite powerful for its price and size. It’s not analog, but it includes two digital polyphonic synths that can do basslines, ambient pads or lead sounds, lots of built-in effects and software that allows you to upload your own samples to the four drum tracks. It doesn’t offer the deep controls for shaping sound as some synths, but if you’re happy with modifying presets Circuit is ideal. 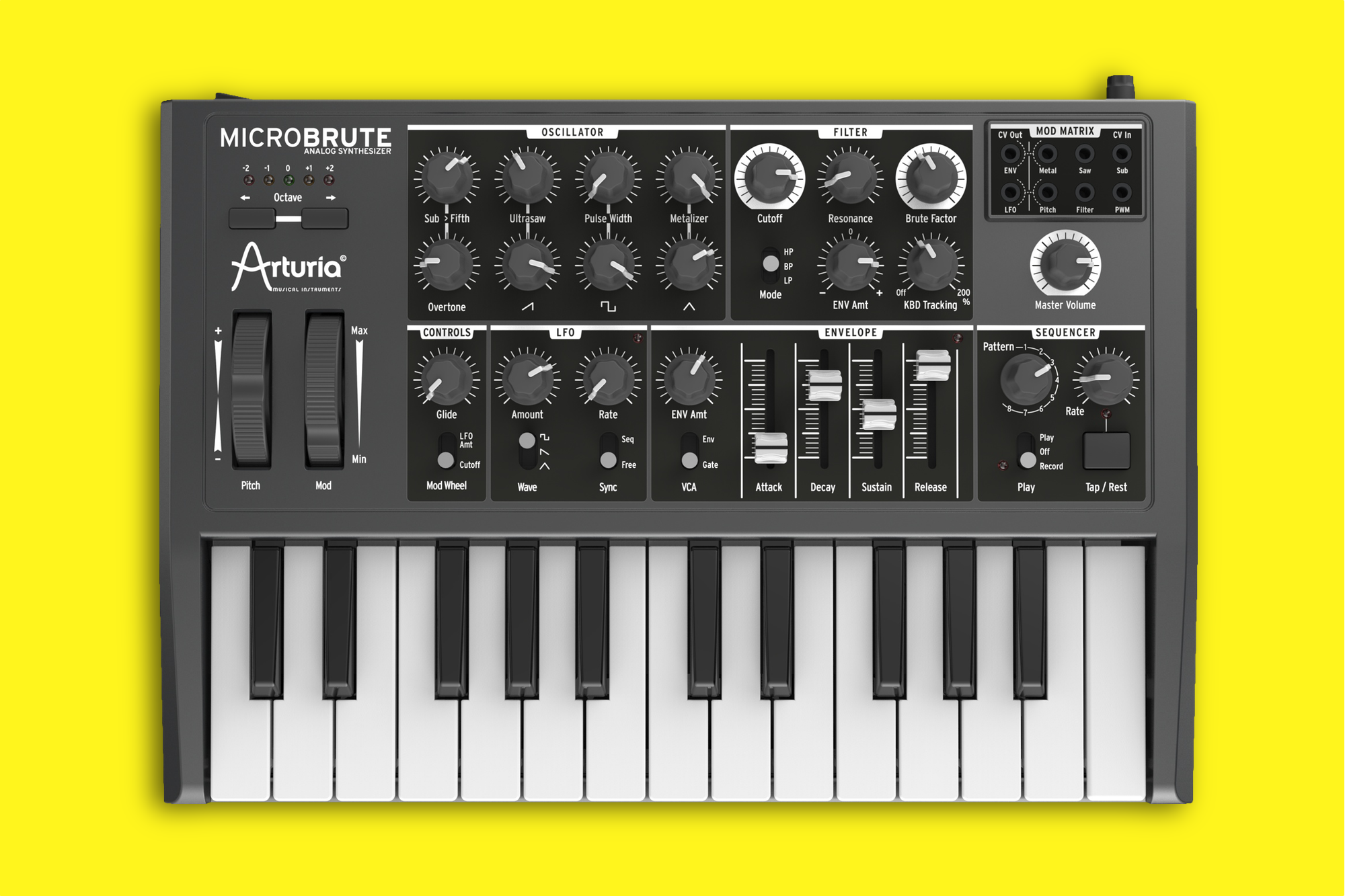 Some people just want a synth to make a lot of loud, weird noises, and there’s no shame in that. If that’s you, Arturia’s MicroBrute is perfect. It’s got all the real analog grunt of a much larger synthesizer in a very small body, with just enough hands-on controls to teach you all the basics of synthesis. Its sequencer can store eight patterns of 64 steps each, a huge amount compared to the 16 steps offered by some manufacturers.

The MicroBrute has lots of other features that make it louder and wilder than other synths: an “ultra saw” wave for extra jagged sounds, a “metalizer” for weird harmonics and a “modulation matrix,” which lets you patch cables like a modular synth and do things like have the LFO (low frequency oscillator) modulate the filter. If you want something hands on but the littleBits is too much like a toy, the MicroBrute is perfect. 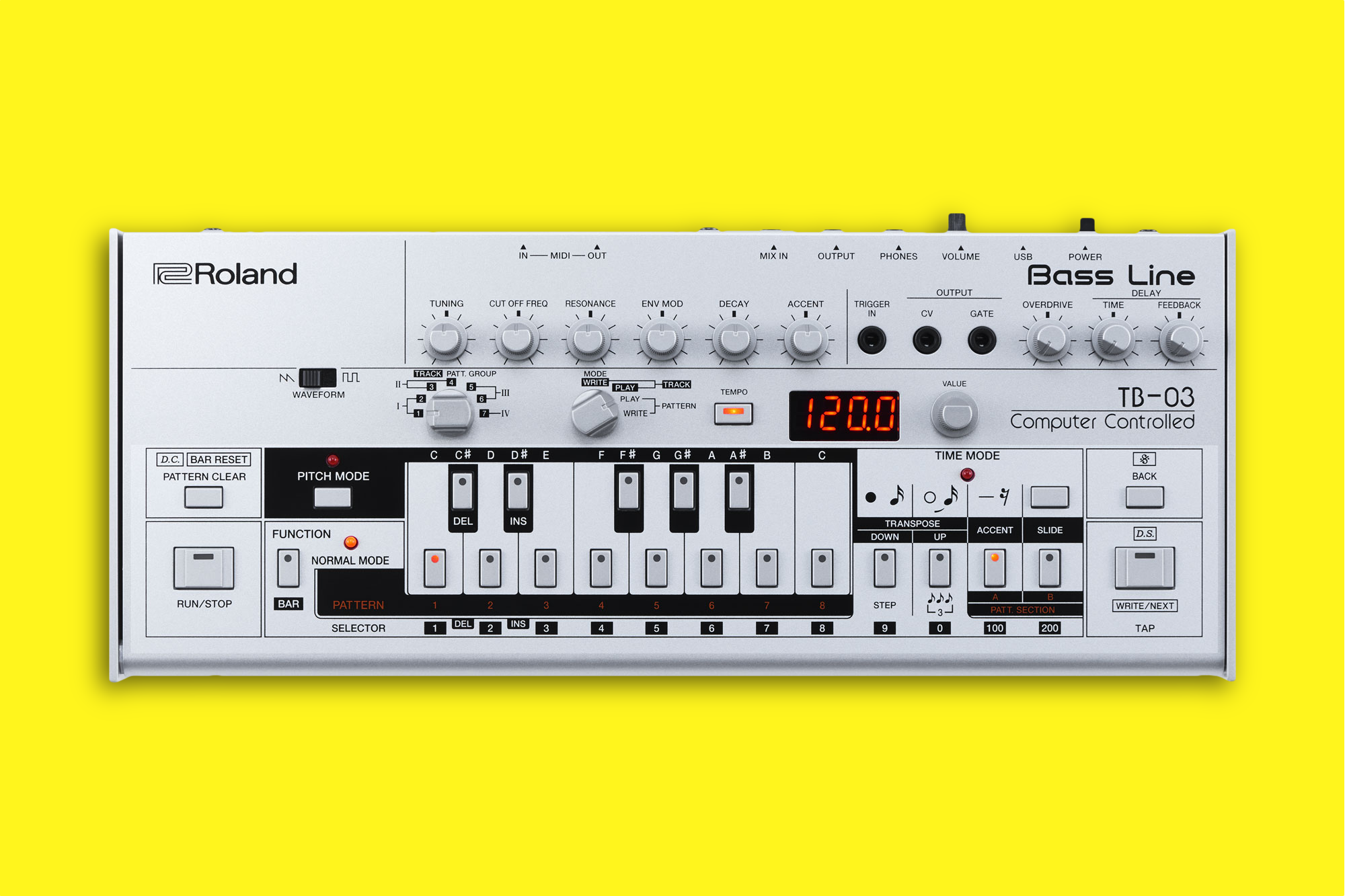 There’s a reason why Roland’s classic TB-303 is so popular: it’s got a genuinely distinctive sound, and though it’s a little overused, it always gets people moving in the club. Vintage units are tricky to come by, but Roland’s TB-03 reissue offers the same simple-to-program experience as the original model. It’s not a real analog reissue, but it sounds so close to the original it’ll make no difference to anyone but the most staunch acid purists.

Roland’s reissue even adds a few features not seen on the TB-303: LCD display for more precise editing, MIDI connection, USB port, overdrive and delay effects, and a shuffle function for adding variation to patterns. However, it’s the ease of use that makes this such a great first synth. Writing a bassline on the TB-03 is almost foolproof; just add a drum machine and you can make your own club music. 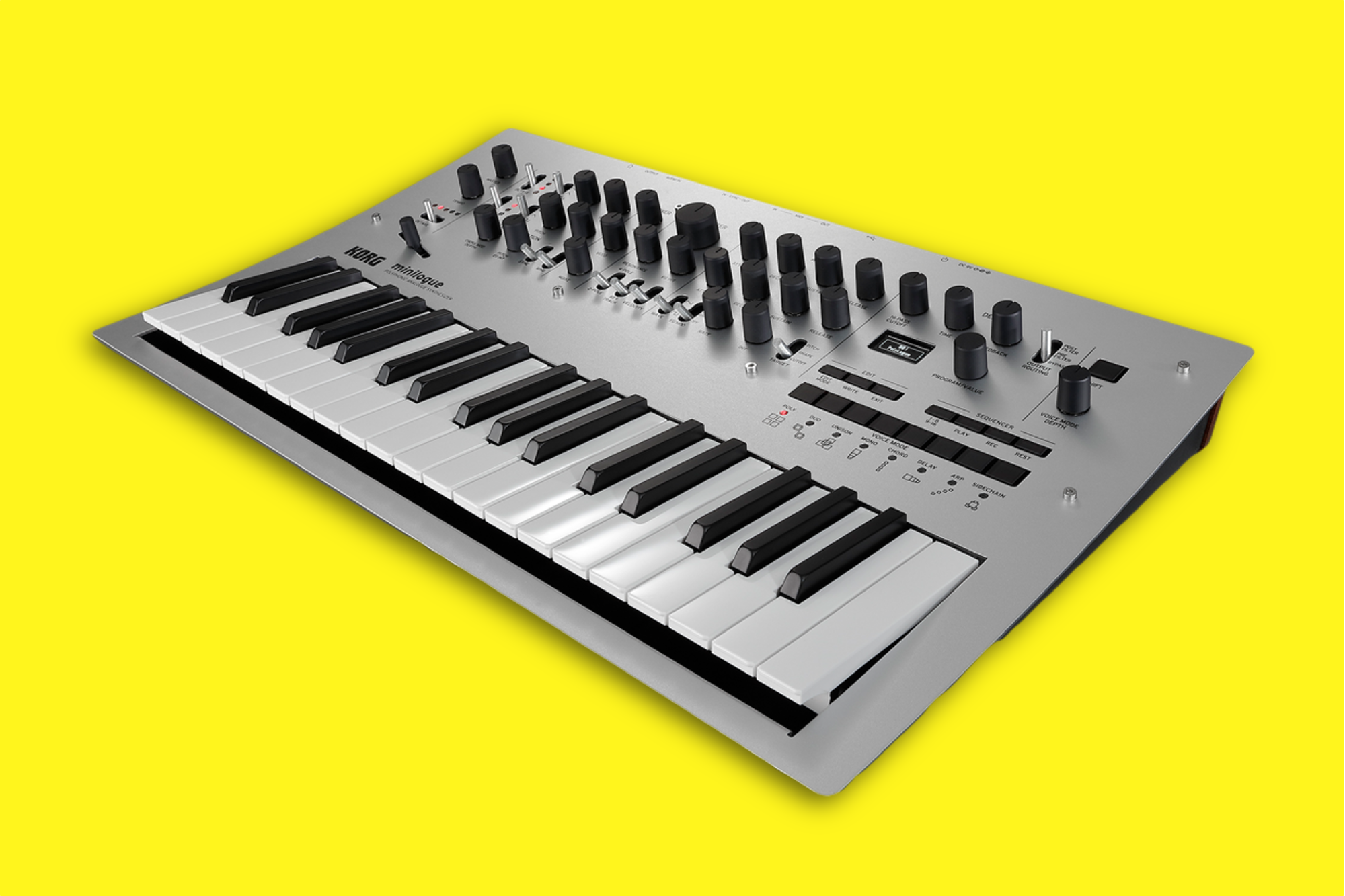 Not everyone wants their first synth to be small and simple. If you’re already an experienced user of Ableton Live and want to move from Operator to a real synth, Korg’s Minilogue is one of the best synths you can buy. At $499.99 it won’t break the bank, but it’s real analog, polyphonic (which means it can play full chords) and has all the hands-on controls you need to use without having to dive into menus.

Like a lot of synths in its price range, the Minilogue has reduced-size mini keys, but if you’re mainly using it for sequencing then that probably won’t matter. If you already own Korg’s Volca gear, it can connect via the company’s proprietary sync connector, meaning you can even add a Volca drum machine for beats. The Minilogue isn’t completely future-proof, but it’s a fine all-rounder while you save up for something more expensive. 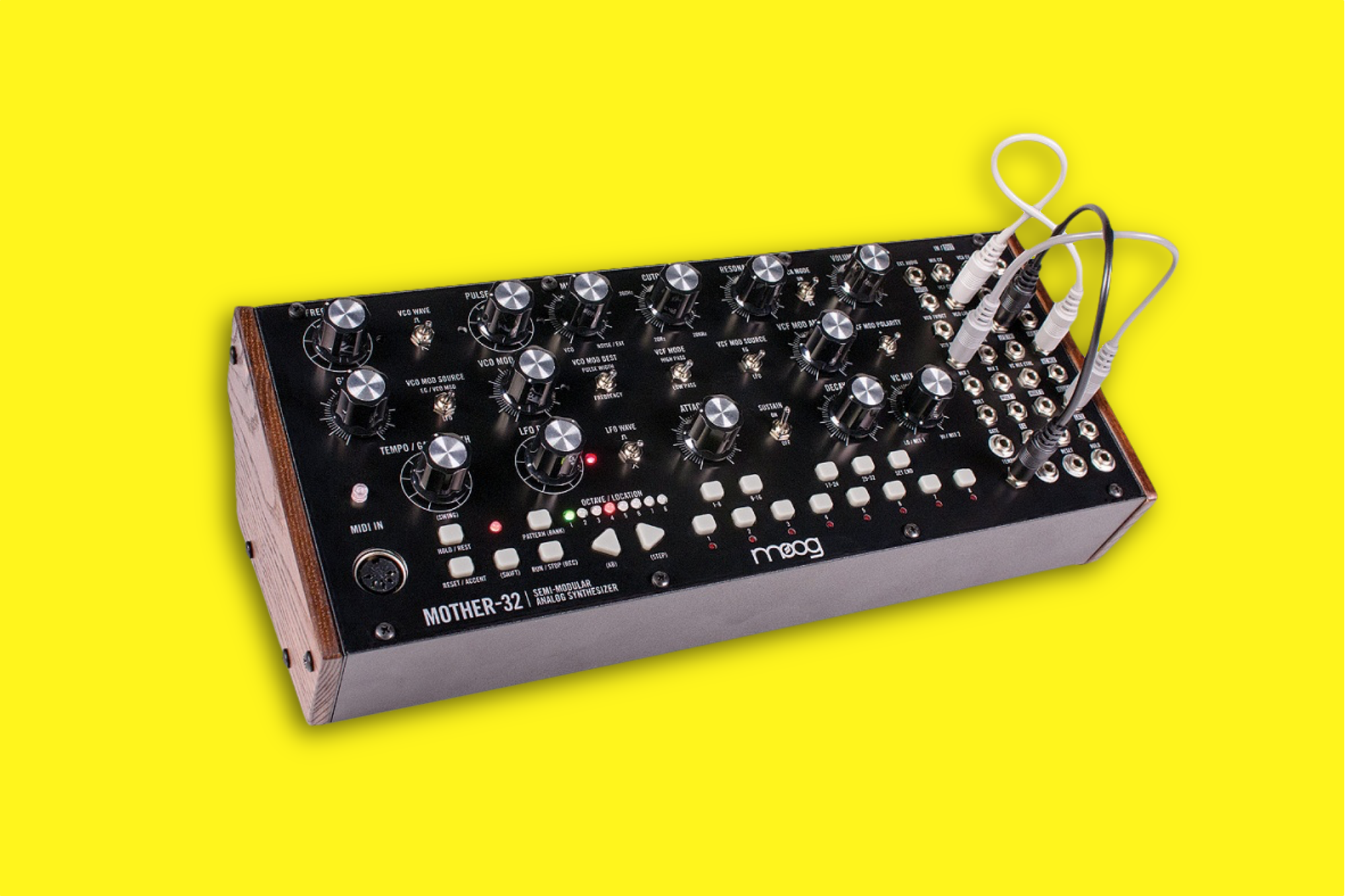 Moog make the kind of synths that can convince people to part with their money whether they want to make music or not. Until recently, you would have to part with a small fortune to buy one, but the Mother-32 offers the legendary Moog sound for under $600, which is enough to be considered affordable, especially for a company that charges over $3,000 for its flagship model.

The Mother-32 is semi-modular, which means it can work as a standalone unit or as part of a larger modular synth. It’s a little too advanced for complete beginners, but it’s perfect for anyone wanting to build their own Eurorack modular system: it’s got everything you need to get started, including a sequencer, meaning you easily expand it with a case and a few other modules.