Synth maven Tara Busch and filmmaker Maf Lewis have been collaborating with each other as I Speak Machine since 2003. Their latest is Zombies 1985, a film set in 1980s Los Angeles with a vintage synth soundtrack to match. Layne Weiss spoke to Busch and Lewis about the new film and their Morricone-inspired methods of collaborating.

Tara Busch and Maf Lewis want to revolutionize how music fits into movie-making. As the duo I Speak Machine, they’ve tinkered with when and how a score is composed, using Busch’s synth work to help guide Lewis’s script-writing and direction. The two are now gearing up to release one of their most ambitious projects, a 1980s period piece called Zombies 1985.

The project exemplifies Busch and Lewis’s unique method of creating: they develop a story concept, use that as a reference point to create a complementary soundtrack and the script is written based on the results of the music. Sometimes the pre-composed score even leads the writing process. “It might not be the music that we use, it really helps to move the pace of the film,” Lewis says. “I just find it very inspiring. It creates an atmosphere to write a script to.”

The duo’s process was inspired by spaghetti western director Sergio Leone’s collaborations with composer legendary film composer Ennio Morricone. Years after first encountering Leone’s movies like Fist Full of Dollars and The Good, The Bad, and the Ugly, Lewis learned that Leone would only send Morricone extracts from the scripts to compose from. “That’s one of the things that influenced how we [created] the music, and the film, and the scripts, and the score simultaneously,” Lewis says. “We just took it another two or three levels and it into a defined process.”

On September 8, they’ll release Zombies 1985 which centers around a Los Angeles man who is so self-obsessed that zombies — played by electronic music pioneer Gary Numan’s three daughters Raven, Echo and Persia, among others — have taken over the city. To root the film’s sound in 1980s Los Angeles, Busch and her co-writer London electronic experimenter Benge only used to hardware that was available in or before 1985. “We wanted to be authentic with the sound,” Busch says. “A lot of those synths were used during that time and just had that cheesiness that we were after.”

Busch and Lewis spoke to FACT about their unique filmmaking process and the variety of hardware Busch used to get their latest film’s authentic sound.

First thing’s first: can you talk about the equipment used to make the music on Zombies 1985?

Tara Busch: Benge owns a huge Moog modular synthesizer. It’s a 1967 3c. We used that quite a bit. We also used a synth called the ARP 2500 which is quite rare and it’s quite famous for being a prop in Close Encounters of the Third Kind. It’s a really beautiful spaceship-looking console [and] it weighs about 200 pounds. It’s one of those machines that you sit in front of and just stare at for a half hour before you even play it because it’s just so awesome. It actually made my eyes well up playing it cause it’s just so beautiful to play.

We also used my ARP 2600, which is a semi modular synth – half of it’s wired like a normal synth that you’d buy in the shop and the other half of it’ is patchable. We used a lot of old drum machines, too: an 808 and an Oberheim DX.

How do you think this equipment helped to illustrate your vision of ’80s LA?

Busch: There are certain things we used that were used in music that came out at that time, like a Prophet 5 and a Prophet VS that has a cheesy, in a good way, magic sheen to it. The sound we were going for was also influenced by the darker British early electronic music like Throbbing Gristle, Chris & Cosey and Cabaret Voltaire. We wanted to create songs that we thought our characters would be listening to, sort of an imaginary radio station.

What does the relationship between audio and visual mean to you?

Busch: With I Speak Machine, the film and the music are a very tight marriage. It just gets you really, really in the time capsule of what we’re trying to achieve. As we create and write the film and the script, I’m also writing the music to it. So we try to work alongside each other as both components are being created.

Maf Lewis: Music always [seems like] an afterthought for movies. A lot of times scores aren’t even thought of [until after] the film’s edited. It’s such an appalling way to treat two beautiful art forms. 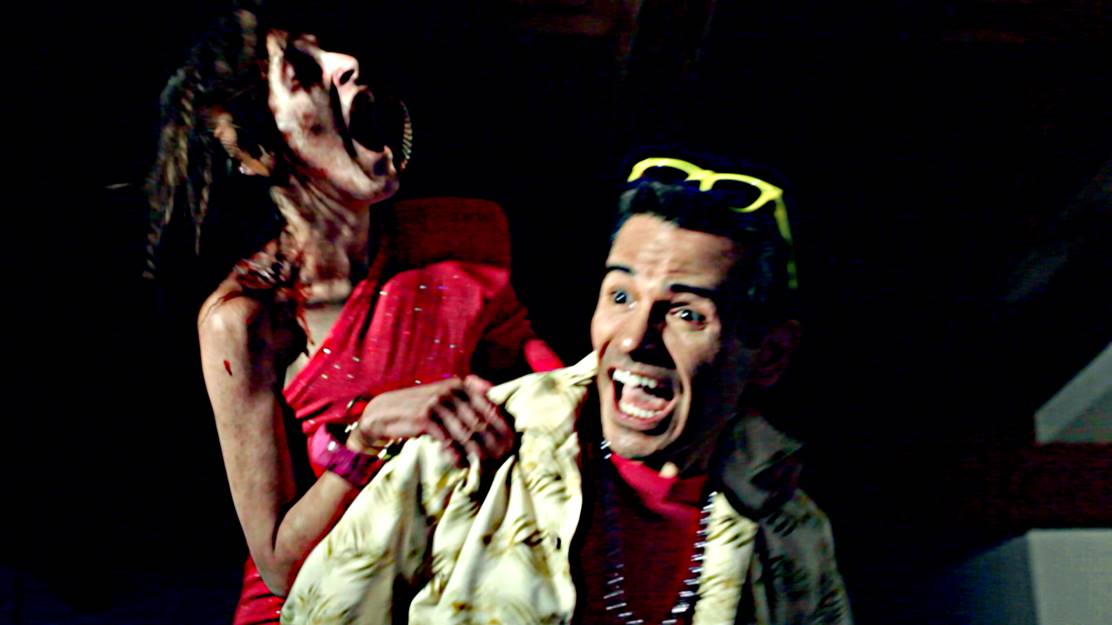 How are you guys trying to change that process in your work together?

Lewis: We wanted to have a guy who was self-obsessed and so arrogant that he thought literally everybody else in the world was a zombie; that they were all morons. [The film] sees the tables turn on him. I started working on the script, Tara started working on the music. Even though it might not be the music that we use, it really helps to move the pace of the film. I just find it very inspiring. It creates an atmosphere to write a script to. When there were scenes I thought were really good and really working, I would pass those scenes off to Tara and she would write a piece of music specifically for that. Then when she’s written that piece of music, I’ll listen to that and I’ll rewrite that page of the script again. We go back and forth.

Busch: Sometimes [he’ll] write something that will give [him] a musical idea and [he’ll] be like: “What if we do a big bend here?” Sometimes I’ll come up with a piece of music and say, “Well, maybe this should be the part where the guy gets out of the car and…” We suggest stuff to each other even though we know our places, but it’s really interesting when we have ideas for each other about stuff cause it’s nice to watch it all weave together.

Lewis: It’s a slightly longer process than most people would use to make a film or album. But at the end of the day, you get a really genuine marriage of the music and the film.

Busch: When we get the actors in, we can give them the music and that gives them something to feed on.

Lewis: When we’re shooting a scene, the actor will have either listened to [the score already] or they’ll have the actual score playing and they’re literally acting to the music in that sense.