The company behind Blocks gets a big celebrity endorsement.

Pharrell Williams has become a co-owner of UK music tech startup ROLI, investing in the company and taking up a position at its chief creative officer.

ROLI has been innovating over the past few years with a range of instruments that give musicians more capabilities for expression: its Seaboard keyboards use a soft, touch-responsive surface that registers movement like glides and slides as well as traditional key presses. Its Blocks devices are aimed more at a novice market, offering a Lego-style modular instrument system that works in conjunction with an app on your phone.

According to a statement from ROLI, these instruments are just the beginning of a “long-term mission to create digitally connected, beautifully designed instruments that open up music creation to everyone,” and Williams will play a big part in helping the company to develop both its brand and future products.

“Music touches all of us, and for a long time I’ve been passionate about finding ways to share the power of music with more people,” Williams says in a statement. “When I met [company founder] Roland Lamb and ROLI, I immediately felt we were working towards exactly the same goals, and so I’m super excited that we’re kicking off this partnership.” 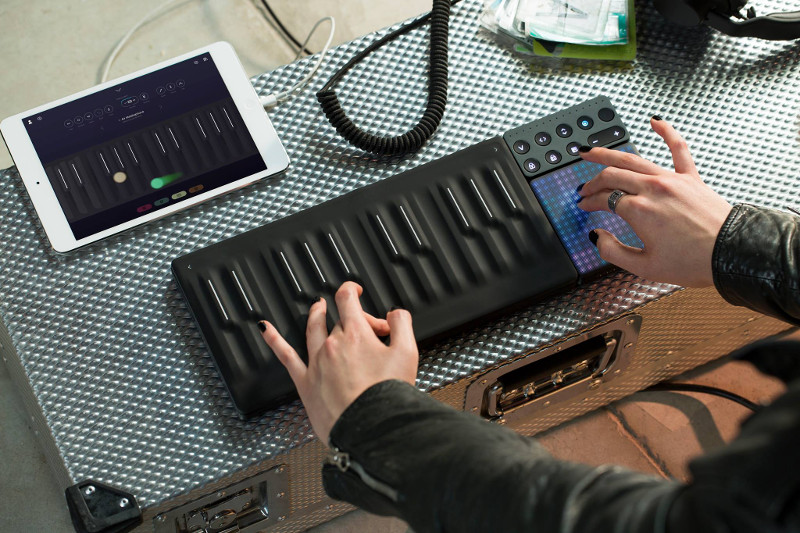 Williams joining ROLI is a surprise, but also a very clever move for ROLI. He isn’t just a singer known for the ubiquitous ‘Happy’, but a record producer in his own right with over two decades of experience in the field, so it makes sense that he’d be able to see the potential in the company’s unique music-making devices.

It also puts ROLI in a very strong position in relation to its rivals: Native Instruments recently announced that it had secured a €50 million investment to “democratize music creation” – a slice of the market ROLI’s pick-up-and-play products are also aiming at. With celebrity endorsement from Williams, a lot of novice producers could be swayed by ROLI’s colorful, squishy gear.

As part of the announcement, ROLI revealed that Williams has made a ‘Happy’ soundpack for its Noise app. This might turn seasoned producers off the Blocks system, but for the mass market ROLI is trying to capture, it could be enough to get them to take notice.

Read next: Komplete Kontrol MK2 review: A MIDI keyboard that keeps your eyes off the computer