Wireless is more: 7 of the best Wi-Fi and Bluetooth home speakers for under $350

Looking to upgrade your portable Bluetooth speaker for something with a little more sonic boom? Tom Wiggins picks seven plug-in wireless models that will really bring the noise.

A portable wireless speaker can only go so loud. Sooner or later you’re going to pump the volume that bit too high and it’ll be painfully obvious you need something bigger if you don’t want your tunes to be drowned out by small talk. Battery-operated speakers offer the convenience of portability, but more volume tends to need more power, so if you want to go louder then you’ll need at least one wire: a mains cable plugged into the wall (although a couple are available with optional battery packs).

The seven wireless speakers listed below are the ideal upgrade from a cheap battery-powered model. Each uses either Bluetooth or Wi-Fi to stream music – some both – and many offer far more than just a way to play tunes from the library of solid gold bangers stored on your phone. They all work with whatever streaming service you favor, but some also support services such as Spotify Connect, which allows you to play through the speaker just by selecting it from the Spotify app on your phone – no pesky pairing required.

A number of these speakers can also work as part of multiroom systems, which means multiple speakers can be daisy chained together but controlled independently. This allows you to have one song playing in one room, and a totally different one on in another, or the same tune playing in every room of the house. These require you to use dedicated apps to control them, which collect all the supporting streaming services, internet radio stations and other locally stored music sources together in one place.

A few also support hi-res audio, which refers to uncompressed digital music that’s available at a much higher quality than you’d get from an MP3, a Spotify stream or even a good old-fashioned CD. There’s a noticeable difference in fidelity with hi-res audio, and if you have a speaker that can cope with it you can download FLAC, ALAC, WAV and DSD files from various online stores. However, it can be a pain to play these formats, so the most common way to access the technology is via a streaming service. Those that offer hi-res audio right now include Tidal and Qobuz but it’s still pretty niche.

None of the speakers below have microphones, so you can’t use them to take calls when your phone’s connected. However, the new Sonos One speaker does include Amazon’s Alexa voice assistant, so you can still talk to it, whether that’s to request a tune or just find out how old Phil Collins is. You’re probably already familiar with the Amazon Echo or Google’s Home, but those smart speakers don’t have the hi-fi chops to mix it with the best. That’s why the One is just the first of many speakers to get an AI helper onboard, with Apple’s HomePod the most notable addition due next year.

Before long the phone could be removed from the equation completely and you’ll be able to fill your home with tunes using nothing but your voice. And we don’t mean by singing. 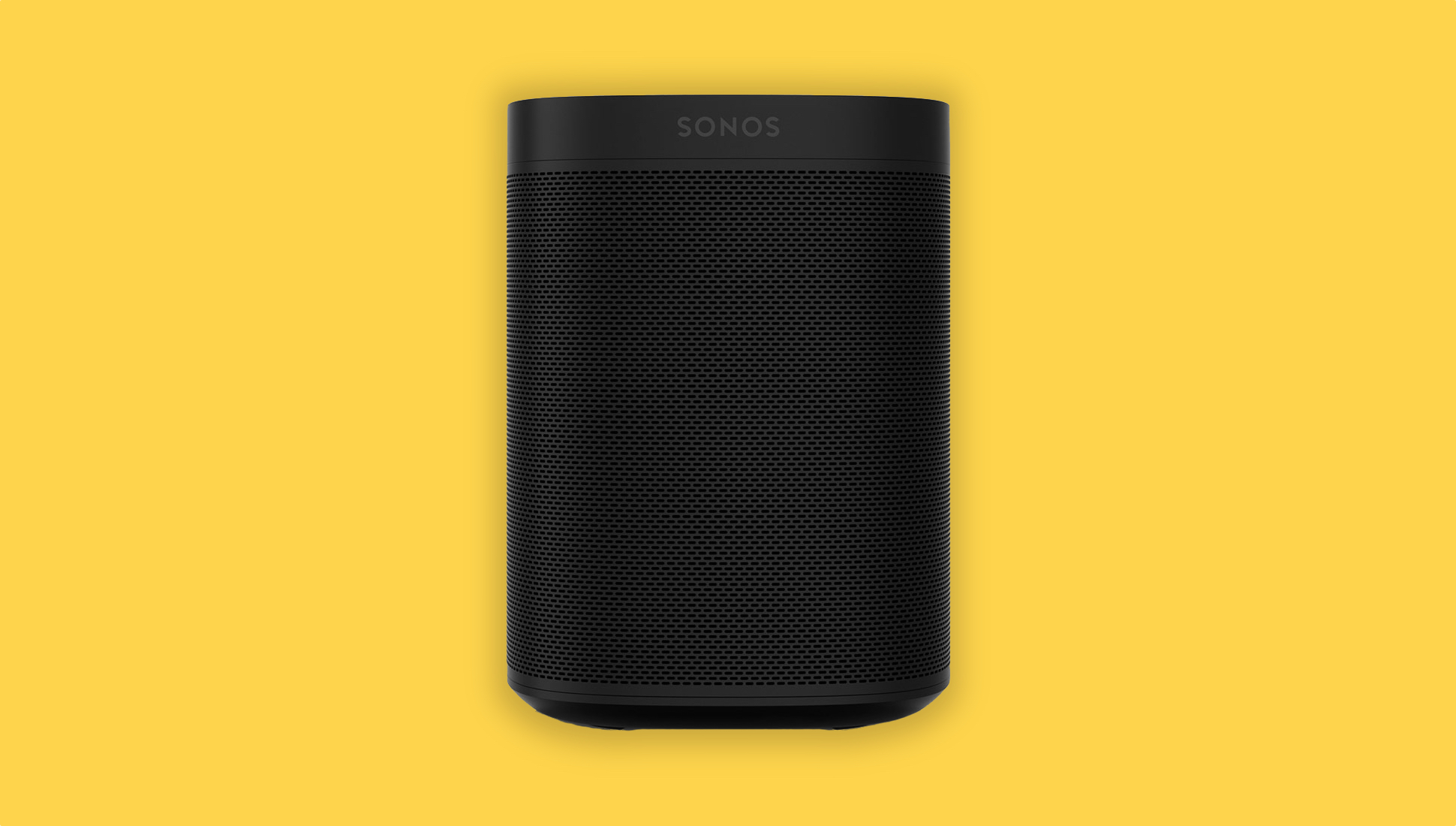 Sonos has been the master of multiroom hi-fi for years now, but the One is the first of its speakers you can talk to. It comes with Amazon’s Alexa voice assistant built in, so you can just tell it what you want to hear and it’ll play it, although right now the only streaming services that voice commands work with are Spotify and Amazon Prime Music, so if you’re an Apple Music or Google Play fan you might want to wait and see if they join the party.

Sonos speakers are designed to be part of a multiroom system, meaning you can put them all over your house and play the same song everywhere, or a different one in each room. Even on its own the One sounds great, particularly considering its size. Bass is weighty, treble is clear and there’s even a decent sense of space, but if you want proper stereo, you can add a second one in the same room and set them up to play as a pair. 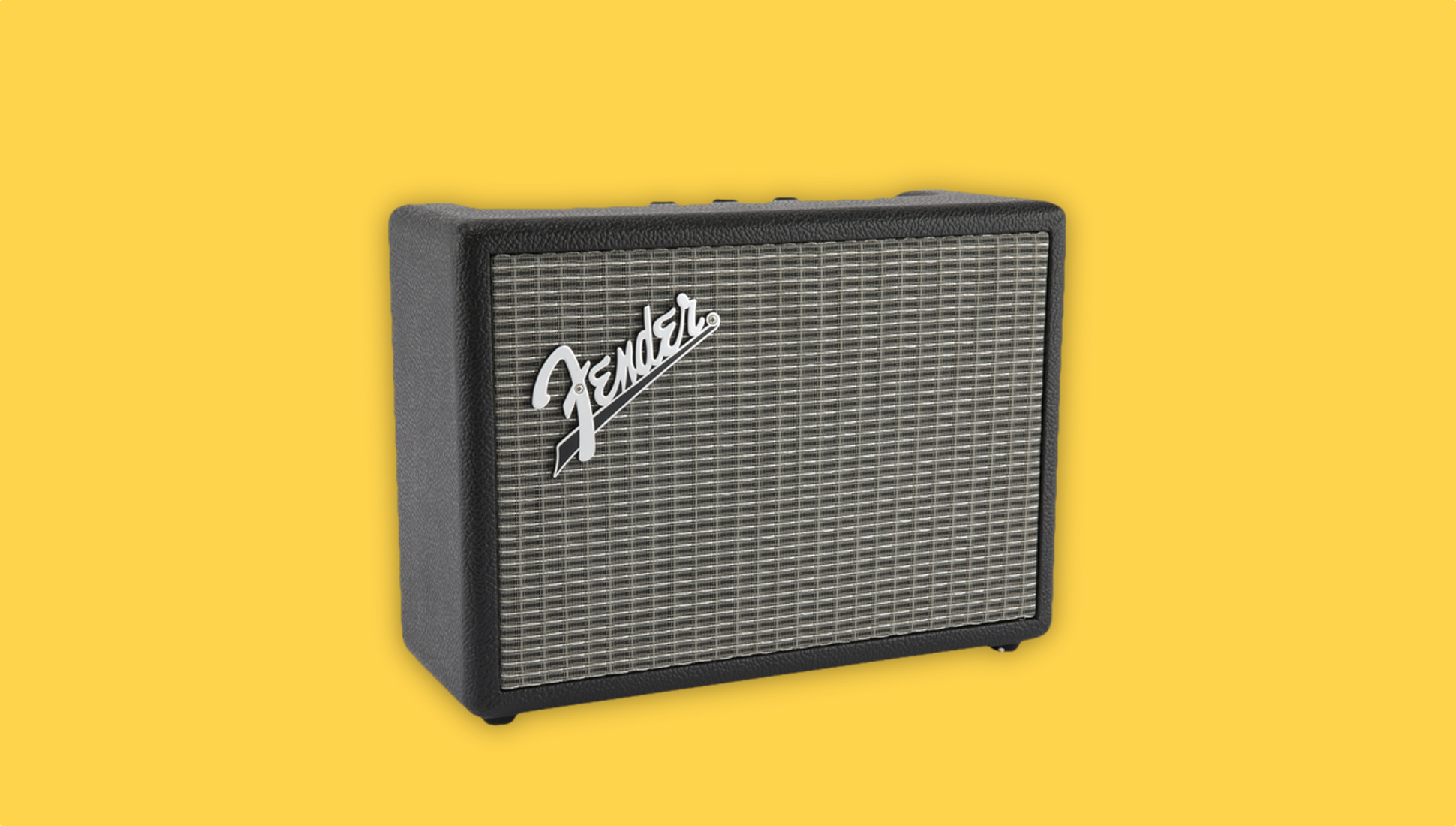 If you want it to look like a miniature Van Halen are playing a gig in your lounge, Fender’s Monterey is a good place to start. Fender usually makes amps (and guitars) and at first glance you’d think the Monterey was supposed to have a six-string plugged into it; from the twiddly black knobs on top (that don’t go to 11) to the hard-wearing leather-like material that covers the heavy wooden enclosure, the Monterey wears its rock ‘n’ roll influences openly.

It goes suitably loud too, with four drivers combining for 120W of tune-pumping power, whether you’re streaming over high-quality aptX Bluetooth or plugged in via the auxiliary inputs on the back. Despite its novelty appearance, the Monterey sounds pretty serious, although it struggles with more complex arrangements. Stick with straightforward rock, though, and that volume will hide a multitude of sins. 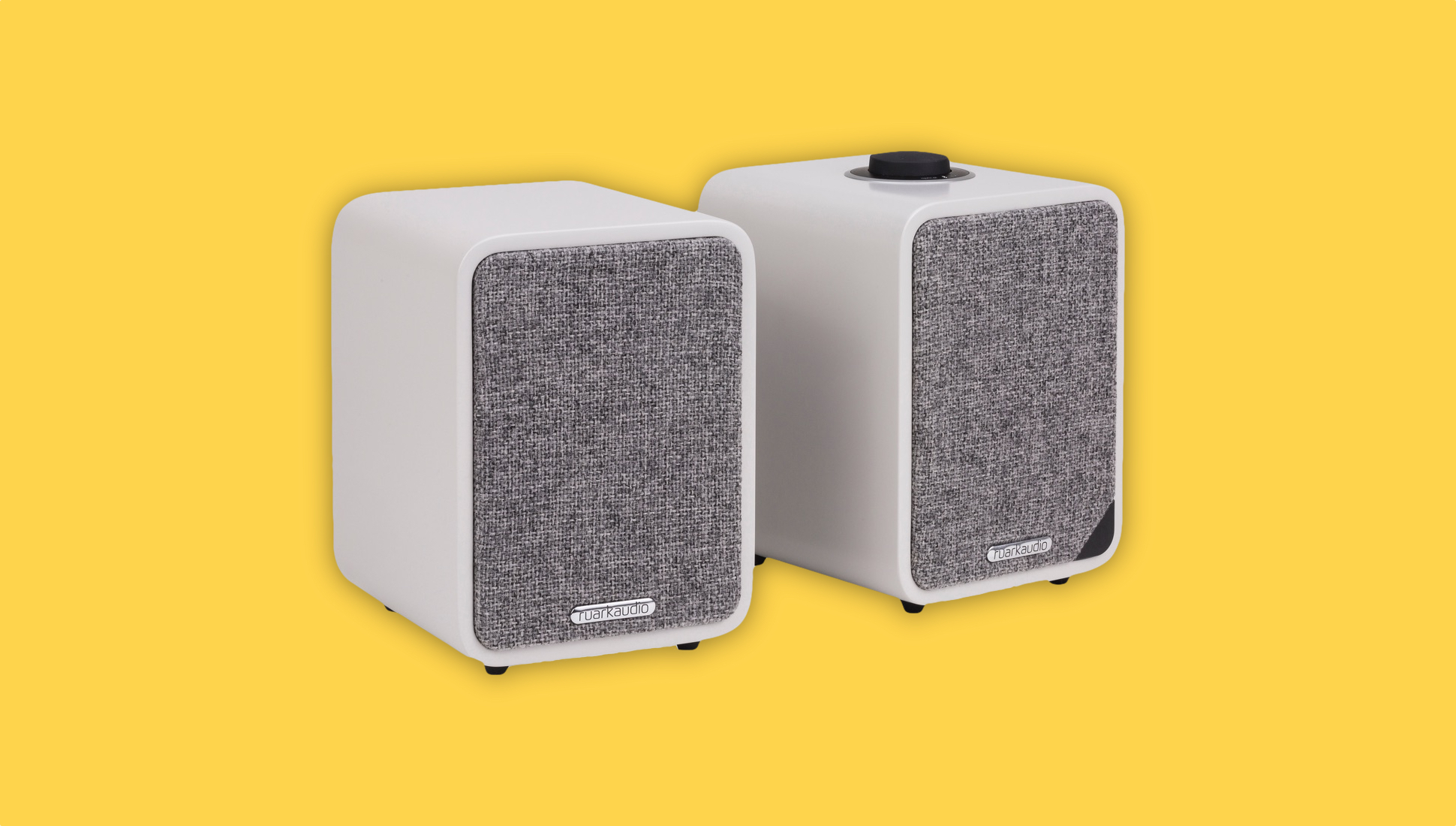 Unlike the other speakers on this list, these Ruark MR1s are made up of a pair rather than one single unit. They have a built-in amplifier and the necessary inputs to use them with a turntable or even your TV, but aptX Bluetooth means you can also stream from your phone or laptop.

Thanks to the proper hi-fi techniques that Ruark has used when assembling what’s inside, they sound brilliant whatever the source. They produce a lovely lifelike sound, with natural vocals and a more detailed mid-range than you might expect from something so small. They’re certainly a step up from your average Bluetooth speaker, although you can even add a battery pack (for £60) and take one or both of the MR1s on the road. 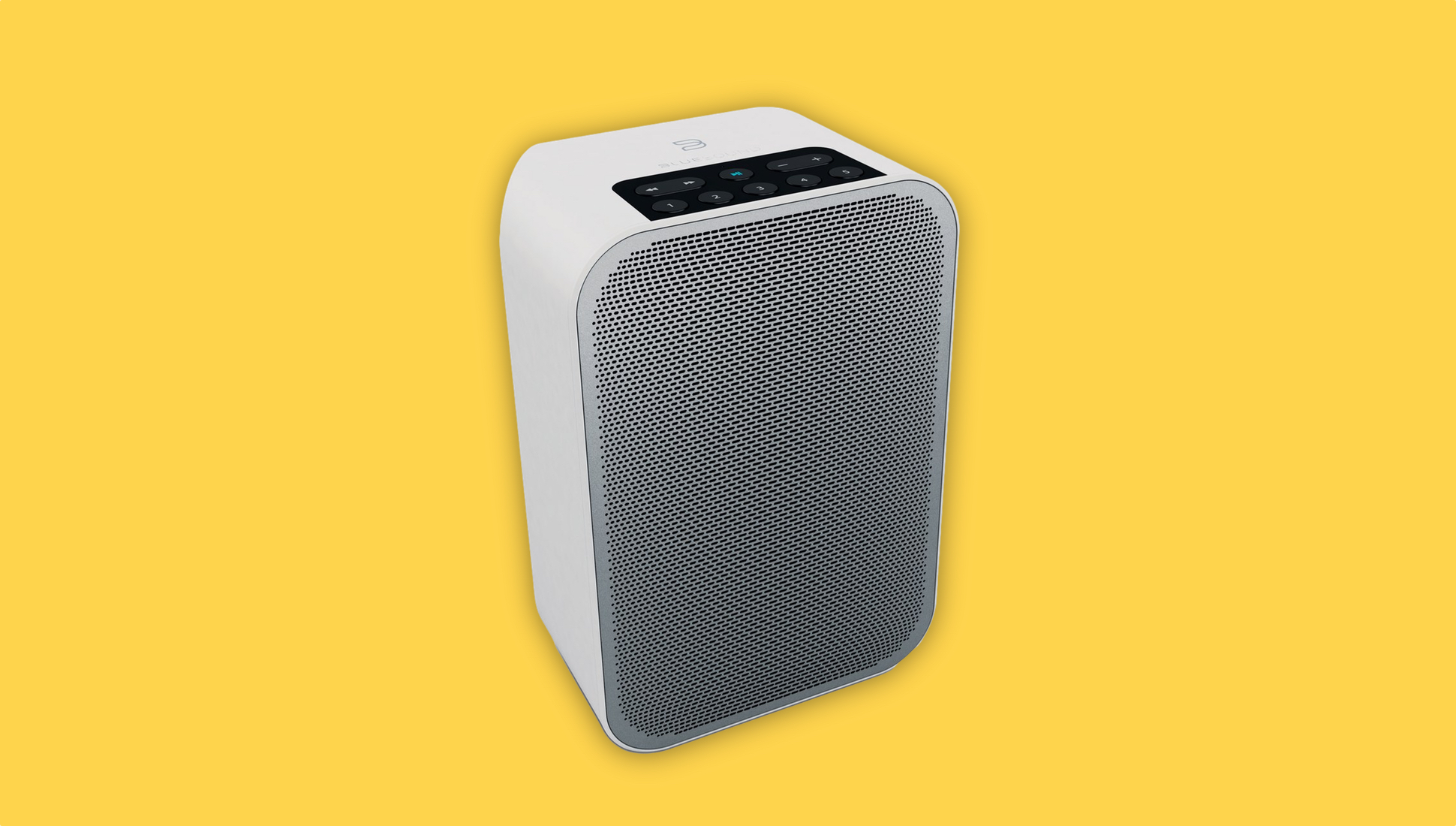 Most people think multi-room means Sonos, but Bluesound’s Pulse range might have something to say about that. The Flex is the smallest one available, and while it’s a little bland in the looks department, your ears won’t be complaining about that when it’s playing hi-res tunes, which sound better than what you’ll stream from Spotify.

The Flex has Wi-Fi as well as Bluetooth onboard, so you can connect it to your wireless network and control it via the BluOS app. Whether it’s music stored on your laptop or streamed over the internet, the Pulse Flex sounds fantastic; it’s hugely detailed and expansive despite the speaker’s diminutive dimensions. Buy a second Bluesound speaker and you can add it to the family, using the app to control what plays where, plus there’s even an optional battery add-on that will allow you to take your Pulse Flex out into the garden. 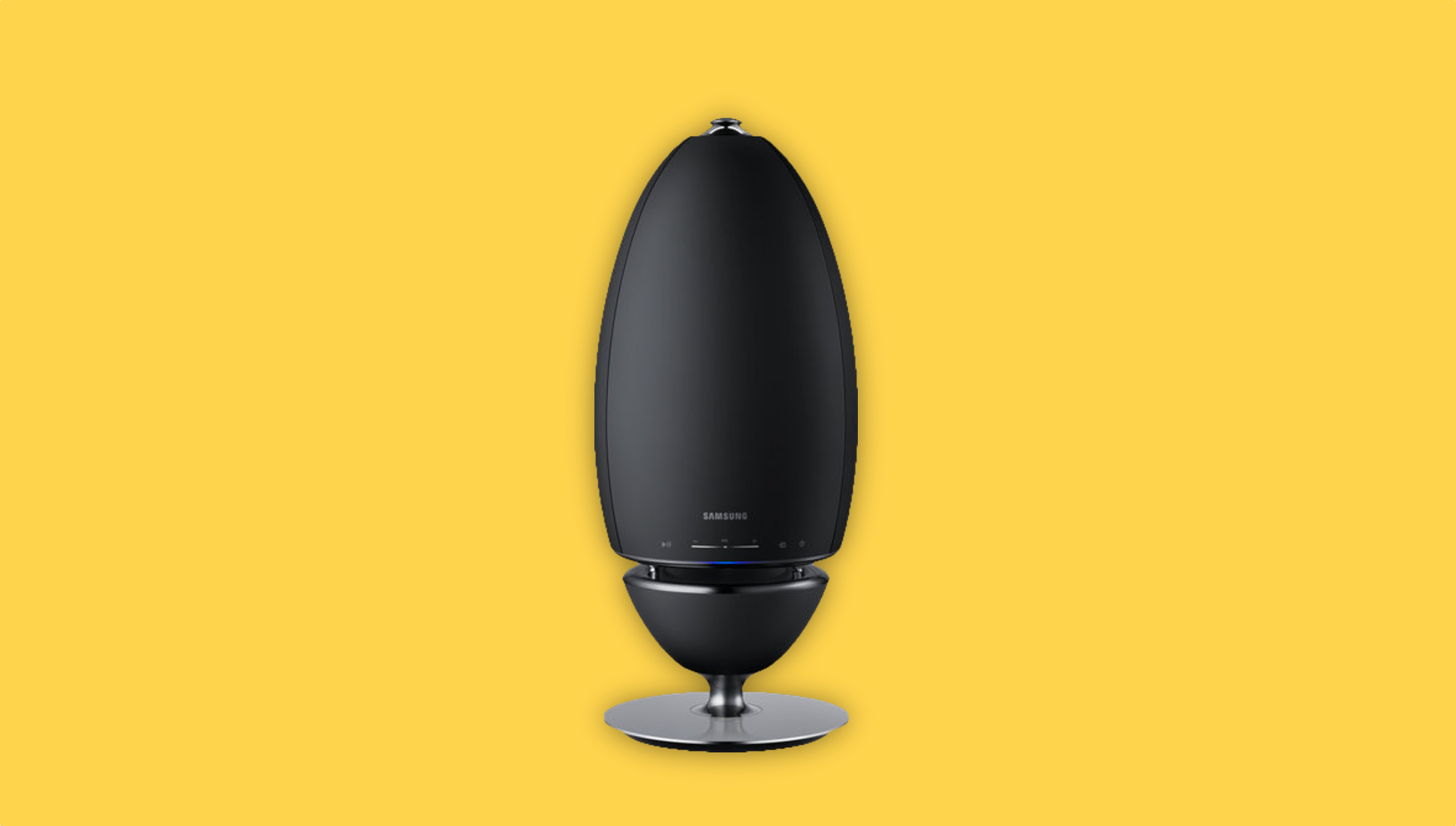 Considering it looks like some sort of alien egg capsule, Samsung’s R7 certainly won’t go unnoticed if you decide to stick one in the middle of your lounge. However, the shape allows it to offer 360-degree audio, channeling the treble through the top and the bassier sounds from the 5in woofer through the gap two thirds of the way down. The R7’s design means it sounds dynamic and well-rounded no matter where you sit around it.

Connectivity comes from Wi-Fi and Bluetooth but everything is controlled through Samsung’s Multiroom 2.0 app, with Spotify, Deezer and the usual streaming services supported. It’ll also play hi-res audio if you’re that way inclined, plus you can even team it with a Samsung soundbar and use it as part of a proper surround sound system for your TV. 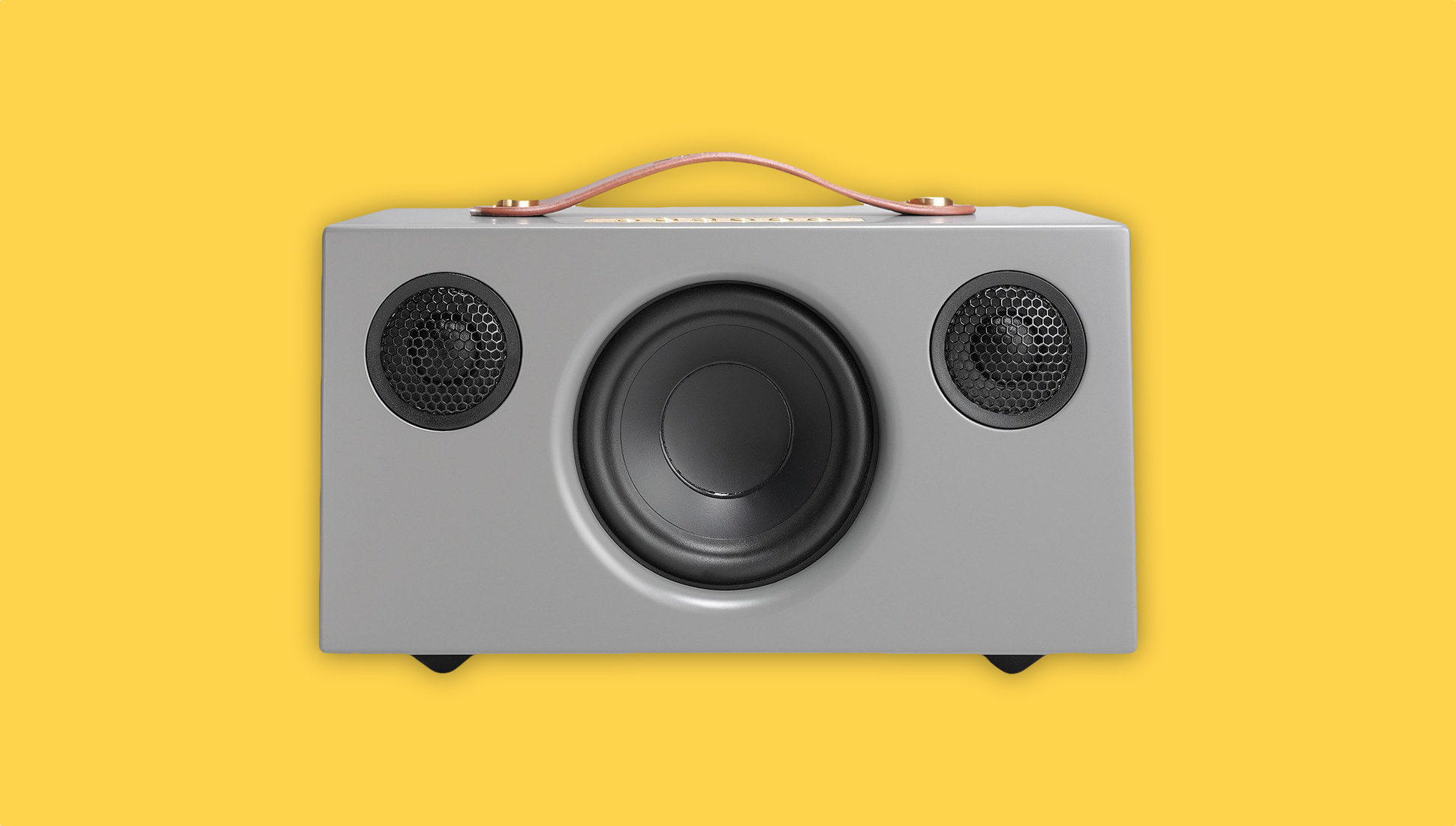 Audio Pro’s Addon T5 might look like the head of a toy robot but there’s nothing mechanical about the way it sounds. An uncomplicated Bluetooth-only speaker, with a 3.5mm input round the back in case you want to plug in, the two eyes are tweeters and the big round nose is a 10cm woofer. They give the T5 a lively, natural sound, with punchy bass and a clean high end.

The T5 sounds bigger than it looks and definitely outperforms its price tag, so while it might not be as clever as the others on this list, lacking Spotify Connect or any of the multi-room tech a lot of the others offer, for the money this speaker is hard to beat. Want more power? The T10 also allows you to add a subwoofer. 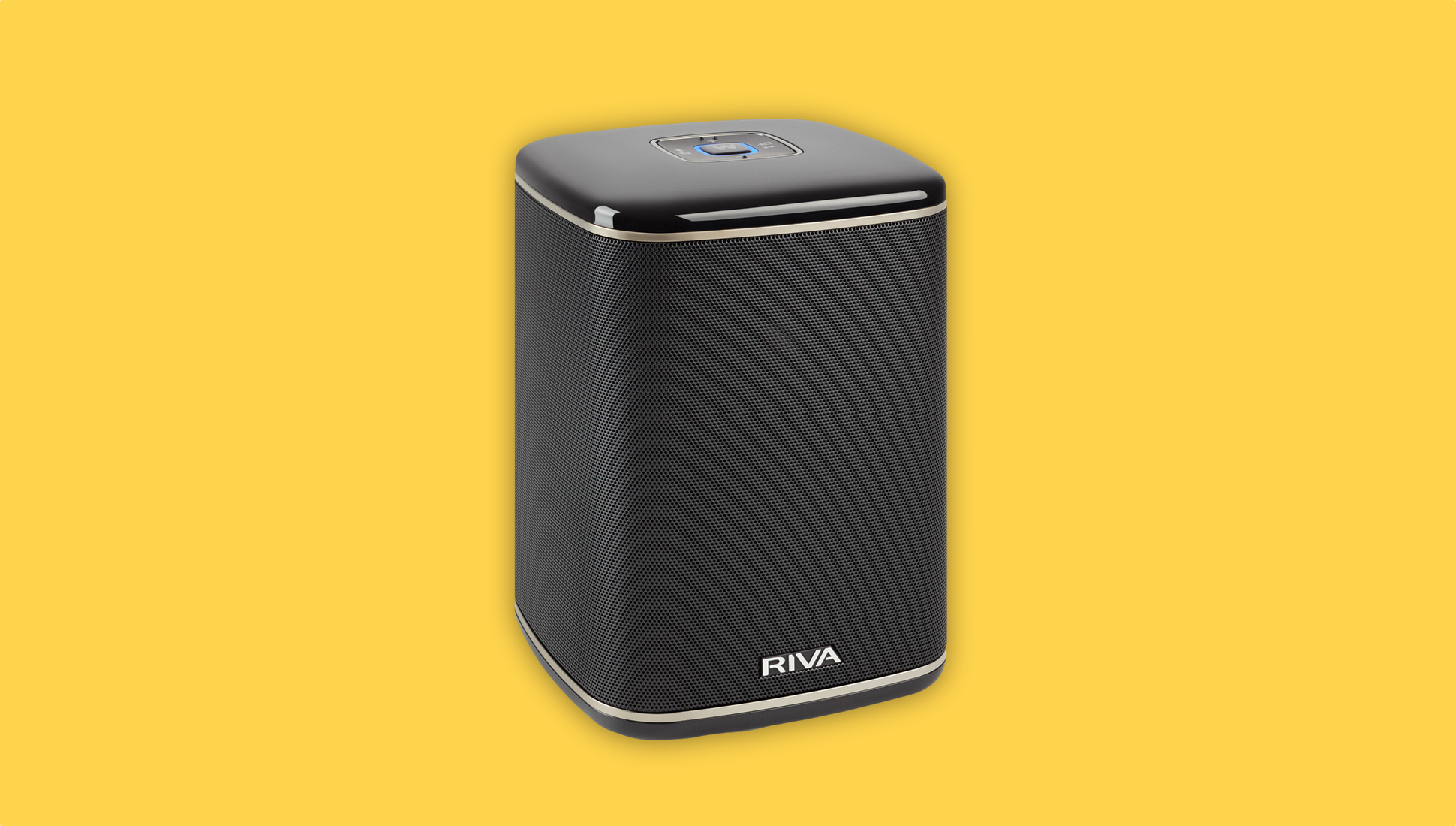 Riva’s S used to be one of the best portable Bluetooth speakers you could buy, and while the Arena isn’t a replacement for it, this plug-in option sounds similarly good. Adding Wi-Fi, Apple’s AirPlay tech and multiroom skills to the party, you can stream directly from your phone or via a streaming service such as Spotify or Pandora.

With three drivers rather than the usual one found in a speaker of this size, the 50W Arena does a great job of articulating the mid-range detail that often gets drowned out. Despite that extra pushing power it’s not so comfortable at higher volumes, but there’s a 200W Festival option if you really want to turn things up loud. Like Bluesound’s Pulse range it supports hi-res audio, and if you want to make it portable you can add a 20-hour battery pack to the base.

Tom Wiggins is a freelance journalist. You can find him on Twitter.