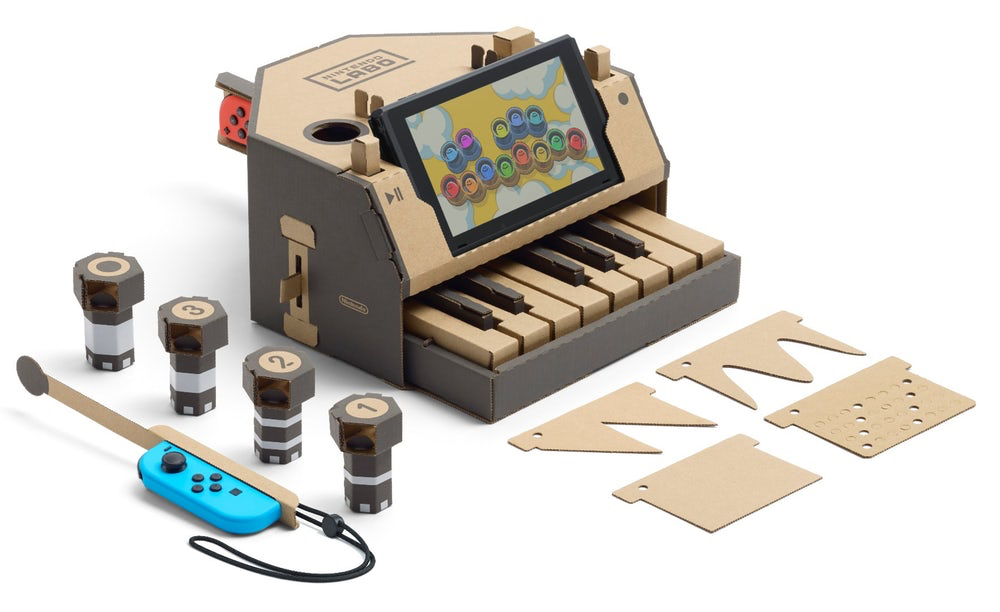 It’s January, which means gear announcements every day up to the annual NAMM show, when all the new synths and instruments get shown off to the public. Already this year we’ve had a modular case from Arturia, a tiny mixer from Korg and Moog’s awesome new drum synth. Are any of them as exciting than this cardboard piano Nintendo is releasing? No.

Described by the Japanese video game innovators as a range of “interactive build-and-play experiences” Nintendo Labo is the first major add-on to the Switch console, whose modular design allows it to be played on the TV or used as a handheld. You couldn’t even really call Labo a video game – it’s more a set of flat-pack cardboard toys that use the Switch’s components to power them.

“With each Nintendo Labo kit, kids can transform modular sheets of cardboard – specially designed to interact with the Nintendo Switch console and Joy-Con controllers — into creations called Toy-Con,” Nintendo says. “As you build, you will have fun discovering how the technology works, and might even invent new ways to play with each Toy-Con!”

Obviously the Robot Kit – which lets you dress up as a robot and smash your way through a destructible environment – is cool, but the most impressive of all the Toy-Cons is the miniature cardboard piano. You have to construct the whole thing by folding up cardboard pieces, including the keys. Then you slot the Joy-Cons in the side, and the screen generates the sound when you press the keys.

What’s even cooler is how it works. According to The Verge, the Joy-Con’s infra-red camera can see the keys and detect which ones are being pressed. This information is relayed back to the Switch screen, which mirrors the keys being played. It even comes with separate knobs that can modify the sound, which we hope means that it’ll function more like a synth than a piano.

The Switch has upended what people expect from a video games console, and now it looks as if Labo is going to be instrumental in getting kids (and grown-ups) into making music as well. So, while we’re eager to get our hands on Moog’s DFAM, Korg’s Prologue and whatever else gets announced ahead of NAMM this month, Nintendo’s cardboard piano has the potential to be bigger than all of them.

Nintendo Labo launches on April 20 in two versions. The $69.99 Variety Kit includes all you need to make a piano, RC car, fishing rod, house and motorbike, while the Robot Kit costs $79.99.