There’s a lyric about police brutality on Moses Sumney’s recently released ‘Rank and File’ that is as clever as it is gutting: “If we make you nervous, then what is your purpose?”

It reframes the racism of a lot of police violence as not just a worthlessness of the soul but also of a cop’s literal job description. “They are supposed to protect us,” Sumney says over the phone from North Carolina. “But if you can’t do that, what is your point?” The EP where ‘Rank and File’ features is Black in Deep Red, 2014. It’s a statement piece that collages the language of protest with the singular emotional density and sumptuous soul and folk sounds that made Sumney a cult figure until last year when he released his first full-length, Aromanticism, to vast critical acclaim.

Even with the spotlight, you can still struggle to be heard. Earlier this summer, Sumney performed at the famed Newport Folk Festival where he played a solo set on guitar but was called “electronic R&B” by NPR. The eclecticism of Sumney’s music can, at times, be hard to define but since the release of Aromanticism, the LA-born singer-songwriter has learned that talking about yourself and your work to an audience can often lead to reductive bullet points — especially when your breakout release hinged on your inability to connect with romantic feelings.

FACT caught up with Sumney to talk about Black in Deep Red, the Mark Rothko painting it’s named after and the language of protest.

You named the new EP after a Mark Rothko painting. His work was so staggering and can be so overwhelming when you see it in person. Did you have a relationship to his paintings that influenced the title or did the connection come from another source?

Moses Sumney: I’ve come very recently into being into visual art. Usually when I like a piece, it means that I’ve only recently become attracted to the types of aesthetics that I find in the piece. The first time I saw Rothko’s work was in the Tate Modern in London, within the past year. There’s a Rothko room there and that was the first time I engaged with the work. The pieces are very large and they’re very simple, they’re minimalistic, but there’s a lot of implied complexity to them and when I was working on the artwork for the EP, the color red was a big thing for me. I was talking to the guy who I made the art with, Nic Viollet, and he was like, “Black and red, black and red, kind of like that painting Black in Deep Red” and I was like, “Wait, exactly like that painting.” It was the best name for the project.

One of the things that you said about the EP in your statement about how it was inspired by a protest that happened after there was no indictment for the police officer that killed Michael Brown: “I felt like a camouflaged outsider at the protest, like an anthropologist performing a study amongst his own kind.” Could you talk a little bit about how you saw yourself as an anthropologist?

Sumney: I don’t really go to protests, I hadn’t really be to one before that. I’ve been somewhat politically active, at least mentally. I think about politics and have since college. But even in college when everyone was getting really activated and marching on campus, I was kind of like, “I’ll write an essay instead of go outside and hold a sign.” Don’t get me wrong, that’s great and it’s great that people do that, but I had never done it. It was interesting entering a space like that. When you’re young and of color, and maybe even artistic, you kind of get lumped in [to the crowd[. People will assume that you have the same opinions, but we have different ways of voicing our concerns. When I said I felt like a camouflaged anthropologist, I felt like I fit in perfectly there: I was walking amongst people marching, but I was thinking about a lot of different things and I was more curious than protestant at that moment.

There is a lot of what, I guess you could, call the rhetoric of protest embedded throughout the three tracks. ‘Call to Arms’ is so beautiful, but it doesn’t have language that is communicative beyond a feeling or a mood: it’s a call to arms that you have to understand emotionally instead of following a message or instructions. How did you navigate how you were going to use and not use the language of protest?

Sumney: A lot of things can’t, and sometimes shouldn’t, be put into words. I was relieved to make a song like ‘Call to Arms’ because I could rely on sound and emotion to communicate the feeling instead of having to develop my own rhetoric for everything. I didn’t want to be dogmatic and I also find dogma a little boring right now. Even with the first track ‘Power’, which does have words, a lot of the emotion and a lot of the meaning comes from the sound: the long notes of drone, the creepy ominous way that the robotic voice overtakes the real voices. I wanted a lot of stuff to be implied because we’re so steeped in rhetoric right now, not just in news and politics and policy, but also in music.

A lot of people are addressing everything that’s going on right now, which I’m glad they’re doing it, but it can be in really obvious ways. That work is already being done so with those two songs I thought I would be a little bit more abstract. If you get, you get it. ‘Rank and File’ was probably the most inspired song in a direct way by that night. I wanted to talk about a very specific thing which is the militarization of the American police force and the ways in which they congregate at protests or whenever it’s time to “get the citizens in line.” 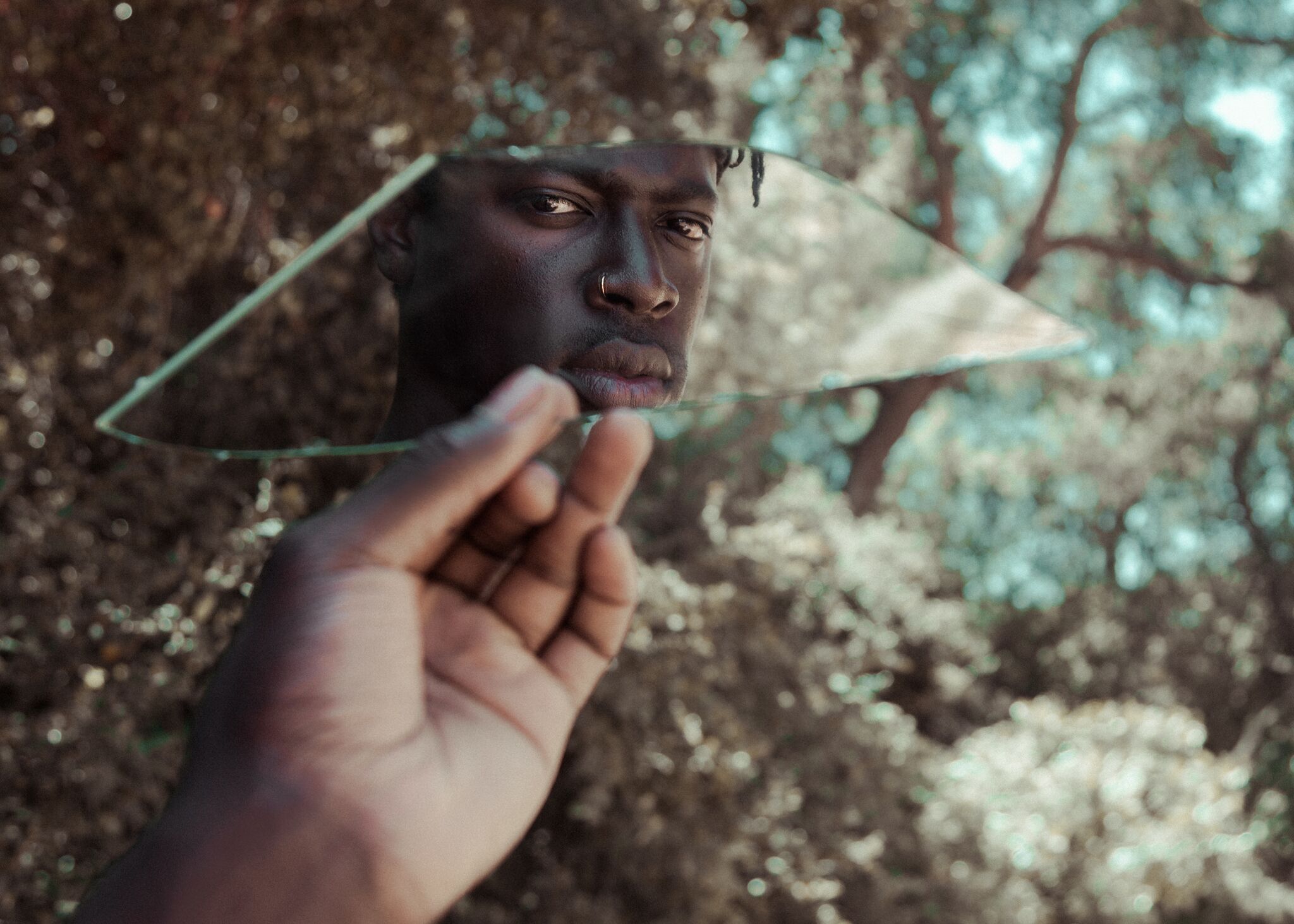 Is that part of the reason why you wanted to put out songs about 2014 now?

Sumney: Well, it’s what I had [laughs]. I didn’t put the EP out because I looked at the currency of things and said, “These songs are really gonna speak to the way things are now.” I put it out because ‘Rank and File’ is a song that I have and I wanted to put more music out. I’ve been performing it on tour for the past three or four years and people always ask me when it’s going to come out. But it’s so different from Aromanticism that I didn’t want to release it alone. I thought it would seem like such a random departure from the album, so I wanted to make a small concept EP to support that song. I was very purposeful in the way that I talked about it — calling it Black in Deep Red, 2014 and writing the statement about when I wrote the song because I didn’t want it to be contextualized as protesting the current administration.

I didn’t want it to be turned into a very specific anti-45 thing, which is the thing right now. I was more interested in a complex narrative and saying, “Hey, I know things are really bad right now, but we can’t pretend that everything before now was great and we need to talk about government in a more holistic way when we’re critiquing it.” Taking a song about police brutality from 2014 emphasizes that it was a problem then, it’s a problem now, it was a problem 10 years ago and it was a problem 20 years ago. If we only focus on right now, we’re not going to be able to create solutions that last beyond now.

How’s the last year been for you? Your album had very specific themes about the inability to feel romantic feelings. As you’ve been on tour, have you encountered people who were able to find a voice through your music?

Sumney: I have encountered on the road and at shows and even on the streets sometimes people who feel like they connect to the themes of the album, people who are relieved that this is being talked about, people who had never heard of the absence of romance discussed in this way, that this album gave them a context, a vocabulary to define the things that they’d been feeling. Most of the people that I’ve encountered are in relationships or have been in relationships or are actually very romantic people, so that’s also nice because the thing I’m always trying to push is that every narrative is complex and that the people who connect to my record are not just hermits who live in caves. Sometimes they’re married and it’s kind of cool, I like the complexity of people acknowledging that no matter where they are in their romantic journey, sometimes it’s hard to connect to people.

A lot of the press around the album last year dubbed you as sort of the poster boy for loneliness and solitude, but it’s a really lush record with a lot of players on it, you often play live with a band, you’re not really alone.

Sumney: The thing that I have learned, and will probably continue to learn, is that if you live any aspect of your life in public and put out work, to talk about it is to reduce yourself to a bullet point or a headline or even a meme. The thing that has been difficult for me has been talking about my record and then seeing other people talk about it and changing the context or altering it or, really, reducing it to the most simple form in order to get people to understand it. In doing that, it kind of changes the meaning. There were a lot of headlines that framed my record in terms of “aloneness” or “solitude” and it bugged me because it’s not that simple.

But as you say, there are many other people on the record: musicians, producers, engineers. It wouldn’t be what it is if it wasn’t for the collaborative nature. And there’s a lot of it that I did alone, there’s a lot of it that I went into the mountains for — when it was time to write lyrics or sometimes to record vocals. I wrote all the lyrics myself and my voice is the only voice on it. I think the aesthetic nature of how it was made kind of contributes to the meaning to the music. It has nothing to do with the headline that’s being created. It’s not like, “I’m alone and that’s great!” that’s not what I’m saying.

You’re also doing a project called Faux Mo. Earlier this month you played the first show at the Japanese American Cultural & Community Center in Downtown LA. Can you tell me a little bit more about that?