Yamaha’s latest synthesizer, the MODX, is a hybrid instrument that offers next-generation FM synthesis at a price that’s more affordable than its flagship instrument. But how does it follow in the footsteps of the company’s much-loved DX family? Scott Wilson spent some time with the synth to find out.

Yamaha’s DX7 is one of the few synthesizers that has genuinely shaped the sound of music as we know it today. One of the world’s first digital FM synthesizers, it offered a way to create ostensibly more ‘realistic’ sounds than analog synths like the MS-20 or CS-80, but became just as well loved for its uncanny signature; its lineage can be traced all the way from Hall & Oates, Whitney Houston and Brian Eno through Japanese new age music and Detroit techno to vaporwave.

Yamaha isn’t the only synth company to have released FM synths, but the DX7’s legacy means that the Yamaha name is, for better or worse, synonymous with the technology. After the DX brand was retired in 2001 following the discontinuation of the DX200 module, Yamaha revived it in 2015 with the Reface DX, a small, portable FM synth that simplified the often arduous FM programming experience but featured a sound engine that wasn’t quite up to the same standard as the 30-year-old DX7.

The new MODX line, unveiled last week, is Yamaha’s latest stab at FM synthesis. Although the company hasn’t made any explicit links between this and the DX line, it’s fairly obvious that it’s calling back to the revered synth brand; the DX component of the logo itself is near identical to that found on the DX7. However, it’s actually a cut-down, less expensive take on its flagship Montage synthesizer from 2016, a hybrid synth combining an advanced FM-X engine with AWM2, a sample-based synth engine. 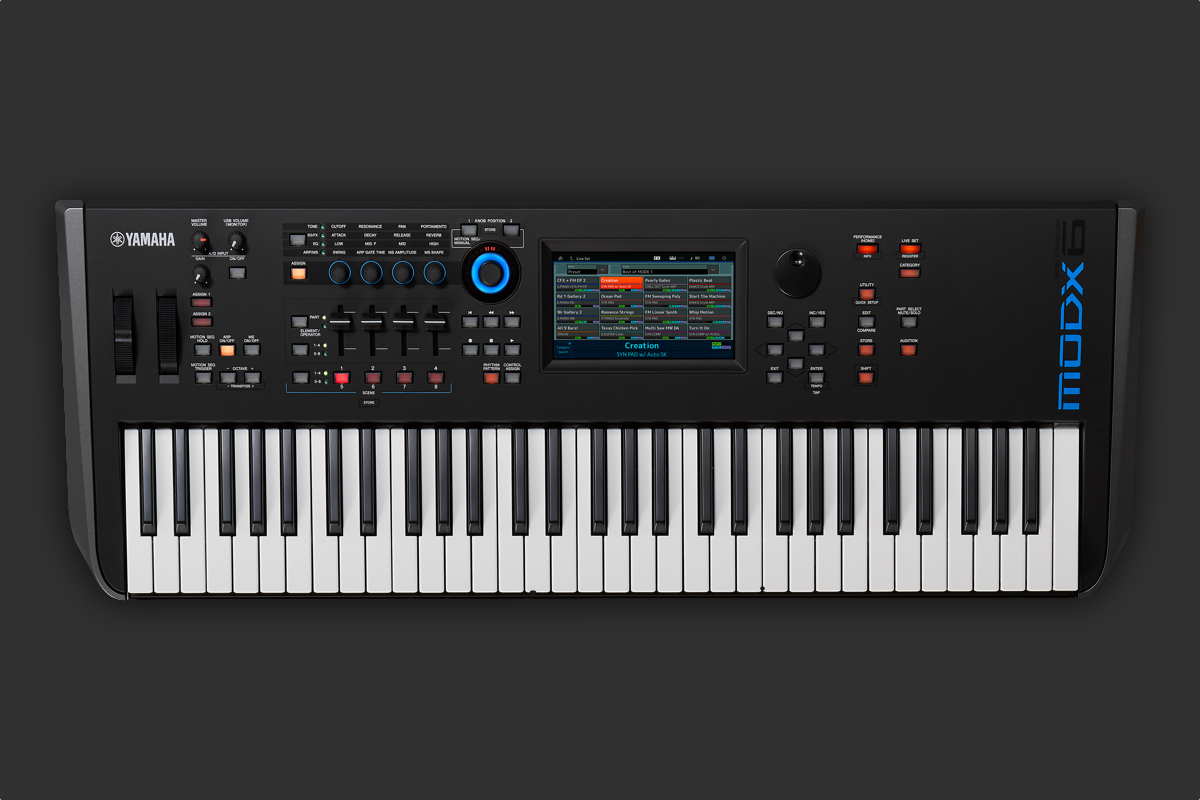 In simple terms, this means that the MODX is capable of FM synthesis – with a much more complex engine than the DX7 – as well as the kind of advanced synth modeling you need to recreate highly ‘realistic’ acoustic sounds. You can even combine the two modes, if you’re so inclined. Previously, you’d have to spend $2,999 on a Montage for this technology in a standalone synth, but the MODX starts at $1,299 for the 61-key version and goes up to $1,899 for the 88-key model.

I got a chance to play with the MODX last week and was impressed with the technology, but a little underwhelmed by the design. There’s no getting away from the fact that the MODX is aesthetically lacking in comparison to other mid-price synths in a similar category, such as Korg’s recent Prologue, which blends a sharp, modern look with a vintage cool. The MODX doesn’t even embrace the garish retro charm of the original DX7. To be blunt, the MODX looks more like a MIDI controller than a premium synthesizer.

But if you can get past the look of the MODX, there’s some intriguing technology and great sounds onboard. Browsing through the presets I found plenty of FM favorites such as twangy digital bass sounds and glassy pads alongside impressively modeled strings and percussion using the AWM2 engine. Using the two modes in conjunction with what Yamaha calls the “motion sequencer” allows you to make complex, evolving pad sounds and automate a wide variety of parameters.

There’s also something called the “Super Knob”, which seems to be aimed primarily at live performers. Users can map the knob to up to 128 different parameters at once and tweak them all with a twist of the knob or the press of an attached foot pedal. Features like this always run the risk of being an under-used gimmick, but the flexibility it offers is likely to be popular with anyone looking to add something more than the usual pitch and modulation to their playing style.

While I don’t love the look of the keyboard, it does feel well made. It has a few buttons for navigating the menu and most of the interaction is done via a touchscreen, which is responsive enough for making your way around presets. It’s undoubtedly better than the obtuse menu diving of the DX7 for patch design, but in my brief time editing patches I found it less immediate than the experience I’ve had using the knobs on the Elektron Digitakt or ALM’s popular Akemie’s Castle module.

Richard Devine, who is perhaps best known currently for being one of Eurorack’s most vocal fans, is also an FM synth expert who has been using a Montage for sound design for a few years now (he recently used the instrument to create most of the sounds for Jaguar’s first electric car). In Devine’s opinion, the experience of programming patches on the new MODX is a marked improvement over Yamaha’s legacy FM synths.

“On my old DX7 the screens were half the size of my iPhone,” he says. “Here we have a touchscreen, everything’s in color, you have beautiful displays and there’s lots of visual feedback. Everything in my opinion is very elegantly laid out, they did a really nice job – the graphics are nice and clear and it’s easy to see in low lighting conditions too, which is good for playing shows or working in the studio.”

“Personally, I feel that I’m able to program things much quicker with this than my old synths like the DX100. They were all very tedious to step around, whereas here you can immediately go to different modes very quickly, you can solo things, you can get to the routing – everything is just one button click away. It’s very quick and intuitive.”

The MODX is considerably less expensive than the Montage, but concessions have been made to make it more affordable. On the Montage, the FM-X engine is capable of 128-voice polyphony, but on the MODX you only have access to 64. For Devine though, this isn’t necessarily a dealbreaker. “Even at 64 voices I rarely max out,” he says. “Even this version is able to do 99% of what I want and I’m not even doing that crazy stuff with it half the time. If you want to get really crazy you can – you have the flexibility and the power.”

A lot of producers are going to question the logic of releasing a synth like the MODX in 2018, when a lot of companies are either looking towards modular synth integration, creating compact all-in-one boxes, or both. Even the 61-key MODX6 is going to be a large and expensive instrument for bedroom producers. If you’re an FM nerd though – especially one who wants a keyboard for performance – there isn’t anything quite like it in its category. The MODX could be one of the most compelling reasons to consider a Yamaha synth in years.