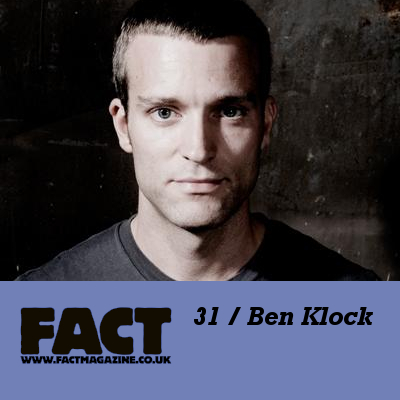 Our 31st exclusive FACT mix is by one of the world’s finest techno DJs, Ben Klock.

Along with Marcel Dettmann, Len Faki and Andre Galluzzi, Klock is resident DJ at Berghain, the legendary Berlin club that houses Panoramabar and is the very nucleus of the city’s thriving party scene. As both DJs and producers, Klock and his cohorts have developed a tough, streamlined big-room sound which recalls the 90s work of Jeff Mills and Basic Channels but invested with a certain lithe, skippy quality learned from modern-day minimal and dubstep. Having co-created the prescient Blank Scenario mini-LP with Marcel Dettmann, Klock has released several dancefloor-oriented EPs under the banner of Klockworks; last week saw the release of his debut solo album, One, an incredibly moody and stirring record that featuring the vocals of Elif Bicer and the first Ostgut Ton release since Shed’s Shedding The Past.

Ben’s FACT mix is an astonishingly pacey, energetic listen, and is positively loaded with great tracks – look out in particular for Surgeon’s killer mix of Shed and a new, as yet untitled production from Marcel Dettmann. If you want to hear contemporary techno at its most innovative and insistent, look no further. Tracklisting is below; a Q&A with Herr Clock can be found beneath that.

“Irecorded it in my studio with two turntables, two CD players and asampler. There are some as yet unreleased tracks in the mix – like the newSteffan Linzatti on Stockholm LTD, which I really like. It’s veryJeff Mills-influenced and at the same time very modern. Then there is aSurgeon remix of a Shed track; and I’m a big fan of the opener, a RegisEdit of the track ‘Variance’ by Function.

This month sees the release of your debut album, One. Can you tell us a bit about it?

“Primarily my aim was to really create an album, not just a couple of club tracks. In this way it differs from other 12″s that I did, or the double 12″ with Marcel [Dettmann]. A full-length gives you the opportunity to go in different directions. Of course there are club tracks on there, but not everything is dancefloor-orientated; some tracks have a broken beat, some are without any bass drum. I wanted to translate the deep, dark club atmosphere into something you can also listen to outside of the club.”

What kind of music did you grow up listening to? How/when did you first discover techno/house?

“I’ve been through many stages, listening to all kinds of music from pop, rock to hip-hop. I also studied classic piano and jazz improvisation. My first experience with a straight four-to-the-floor beat was when the first acid house parties came to berlin – that was around 1988/89 and for me as a young clubber it was like BOOM!”

Were there any particular DJs/producers who inspired you to get into music yourself?

“When I was a kid I was already making a recordings with a synthesizer, microphone and a home-made mixer with effects, so somehow the interest was there from the beginning. Later I got fascinated by tracks like Paperclip People’s ‘The Climax’ or Josh Winks ‘Higher State of Consciousness’; from there I got deeper into it and then started to discover artists like Jeff Mills, Robert Hood and Basic Channel.”

How and when did you first  hook up with Berghain and Ostgut Ton?

“I think I played my first set there in January 2005, so right after they opened up the new Berghain venue. That was such a great experience. I felt like it was the set of my life, and after that I became a resident DJ there, so I guess I wasn’t totally wrong! The Ostgut Ton label was brought to life later. Marcel Dettmann and I became friends and tried to work on some tracks together. That’s when Berghain offered us the in0house platform Ostgut Ton. There was no big plan behind the label at first, but our first 12″ had more success than we expected and things went from there.”

How long have you lived in Berlin? Do you feel like it’s changed a lot in the last five years?

“I was born in Berlin – in the former west part. I can’t think of any other city that’s changed more, not only over the last five years, but since the wall came down in ’89. It’s become more and more international which I think is great.

Does DJing at Berghain inspire you as a producer? Do you think there’s a “Berghain sound”?

“Yes, Berghain is definitely inspiring. In some way it’s the centre, the heart and the braincell if you want. In our sound you can hear that we didn’t just start listening to techno yesterday. But we aim to transform these influences that go back to the 90s into something fresh and forward-thinking. Maybe that’s the Berghain sound.”

Do you think that you and Marcel will follow up Blank Scenario anytime soon?

“Yes, we have the plan, just don’t know when yet. We both are very busy at the moment.”

What are your favourite places to DJ in the world?

“Last year it was Sao Paulo, Rio, Dublin and Helsinki for me. I think that’s where I had my best parties besides Berlin.”

Any up-and-coming producers who you like and think we should watch out for?

“The one that I noticed lately was Levon Vincent. I like his raw underground house sound.”

Any plans to play in London soon?

“Yes there are plans, but I think nothing confirmed yet. I only playedthere once, at Fabric. I would love to play in London again soon!”