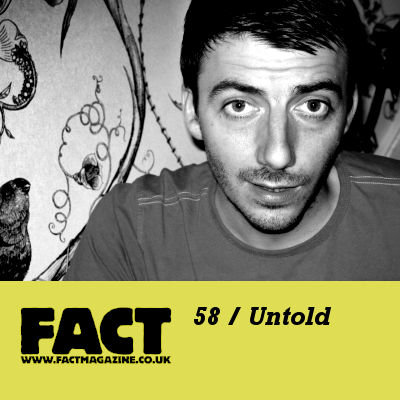 The latest FACT mix is from arguably the dubstep producer of the year so far, Untold.

Jack Dunning to the ‘rents, Untold first came to our attention in early 2008 with his Kingdom EP on Hessle Audio. Earlier this year he quit his day job in graphic design, and as a producer has gone from strength to strength – turning the promise of that early release into a succession of leftfield 12”s more inventive, intense and danceable than 90% of UK music right now, if not more.

We had a hunch things would go that way from the warning shot that was ‘I Can’t Stop This Feeling’ earlier in the year. But when we heard ‘Anaconda’ (later collected on a 12” for Hessle with ‘I Can’t Stop’) it was obvious this guy was in the zone. Since then there’s been his remix of Toasty’s ‘Knowledge’, his remix of Ramadanman’s ‘Revenue’, and his forthcoming stunning single for Scuba’s Hotflush label, ‘Just For You’. And that’s not getting in to his own label, Hemlock, which will soon be putting out sometime Mount Kimbie vocalist James Blake’s debut single.

Recently interviewed in depth by Martin Clark, Untold’s FACT mix features ‘Just For You’ and the Pangaea mix of ‘I Can’t Stop This Feeling’, as well as new material from Hot City, Mount Kimbie, TRG, Ramadanman, LV and more. And we know we say this about loads of our mixes (there’s a reason we ask for them from the people we do, you know?), but this one really is unmissable.