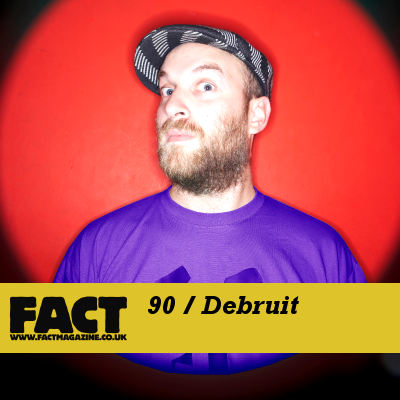 A member of the Musique Large stable with Fulgeance and more, dÉbruit’s brand of hip-hop – finding its space somewhere between Legowelt’s eccentric synth experiments and Rustie’s bottom-heavy crunk – is doing it for us big time right now, and his recent single, ‘Let’s Post-Funk’ is one of the very best 12″s to come from this whole ‘beat scene’ that’s cropped up again in the last couple of years.

The Frenchman’s FACT mix features contributions from touchstones of this sound like Madlib and Dorian Concept, alongside less obvious bits from Kurtis Blow, Konono n°1 and Mweslee, not to mention plenty of dÉbruit’s own material – released and unreleased.

Oh, and if you fancy a visual treat, make sure you peep his latest video, which is designed to be watched with 3D glasses. For a full interview with dÉbruit, check page two of this article.

“It’s a mix I prepared for you when I was in sunny Brittany, which where I’m from.  It’s an appetizer to what I love to express in the diversity of music on a space and time ratio level.”

How would you describe your music to someone who’s never heard it before?

“Bump-hop, bum funk, post funk, hip-mezoued, African roll, Congo woomp, unsteady-hop – I’m not sure but this list grows every time I make a new track, but I just hope there is a heavy dose of fun in the recipe!?”

What’s the Debruit story from your first days making music ‘til now?

“I started playing alto saxophone when I was nine but it was too rigorous and classical for my free approach, so I started learning new instruments and played in some bands till I was the only one left in them… Then quite early I started to consider the computer as a recording device first to layer different instrument that I would play, then it became more a production tool to express my ideas and views over music that I like in an more electronic way, which is where I am today?”

Your last single was called ‘Let’s Post-Funk’ – do you see your music as an extension of funk?

“Sometimes yes, it’s still quite different, but funky basslines definitely inspires me!  It’s also an invitation to another party, ‘Let’s Post Funk’ is an invitation to come back to the place where we held our pre-funk. It’s your final destination of the evening where you attempt to revive the party by drinking past when you should stop! I suppose it can be compared to a way, a process in music making.”

“I’m just a bachelor, looking for a partner, someone who knows how to ride…”

I guess people associate you more with Mike Slott, Flying Lotus, Dabrye, a lot of recent UK/US hip-hop artists. How does that stuff go down in France?

“It’s rare in clubs because the dancefloor French electro scene is too big in France and doesn’t leave any space for anybody else to breathe – too much trend and promo and not enough quality.  Promoters there are not very curious or not willing to make people discover things – there are a few exceptions but there is a lot of laziness about the French scene or a lack of true devotion or risk taking for a good cause!?”

Tell us about your Musique Large stable.

“Musique Large is a label founded by Rekick, an excellent French DJ, then Fulgeance and I joined the team, we released a few records and we are now more involved to make the label work bit by bit and create a unique positive vibe  We are fun providers when it comes to Musique Large parties! New artists are gonna be releasing records soon, we’re getting organised to rock you. Also I should mention Civil Music, they are my label now and are releasing my last single (‘Let’s Post Funk’) and my new EP (Spatio-Temporel) and my first album next year too.  Now I’m living in London and they are my British gang! The new EP is coming out in December and album in 2010.”

Do you guys throw parties out there as well as releasing records?

“Yeah, it happens!  And also people sometimes book us 3 at the same time and this becomes a total other dimension not explainable with words – a Musique Large party is something you dive in which means you come out wet?”

What else should we know about Debruit?

“I’m just a bachelor, looking for a partner, someone who knows how to ride… you’ll know what that is supposed to mean really soon!  Also you should know that I just discovered Georgian food when I was on tour in Russia two weeks ago and it’s amazing, I might consider to cheat on my previously stated favourite cuisine Lebanese with it! Food is like music for me a passion – I’m playing live all over the world over the coming months so come see me and feed me!”

What can we expect from your full-length?

“Expect the album in 2010 after my Spatio-Temporel EP late this year and after ‘My Pony!’ (see this mix for a sneak peak at what I mean) I’m not sure you can “expect” on the album exactly, I´ve got some super secret dE styles already in the works, but if anything it´ll be unexpected! You can be sure it will be indefinable FUN and released before the summer on my London homie’s label, Civil Music. I´m very excited about it already…..prepare yourself with the Spatio-Temporel EP is all I will say!”